1970:  December 26th – George Harrison becomes the first Beatle to top the pop charts with his #1 Single “My Sweet Lord.”  (Of course by now he had already been #1 here in Chicago for the past three weeks!)

Five years later, a New York State Judge would find Harrison guilty of “subconscious plagiarism” and copyright infringement, stating that he found “My Sweet Lord” “too similar” to the 1963 Chiffons’ hit “He’s So Fine.”

The legal battle would continue until 1998, by which time George had paid $587,000 in royalties to the original publisher, Bright Music.  He would later make light of the incident in his 1976 Hit “This Song.”

Not only was George Harrison the first solo Beatle to have a #1 Hit ...

When his rockin' version of "Got My Mind Set On You" topped Billboard's Hot 100 Pop Single Chart the week of January 16th, 1988.


Truth be told, I had some serious reservations about going with today's anniversary date.

Billboard Magazine has long been recognized as "The Music Bible" when it comes to chart information ... and thanks to books published by Joel Whitburn's Record Research, has been reiterated as the only source that matters. (Does the slogan "It ain't #1 'til it's #1 in Billboard" ring a bell?)

But there were, in fact, THREE major trade publications at the time tracking these things ... and although both Billboard and Cash Box showed "My Sweet Lord" hitting the top spot on December 26th, it actually ascended to #1 the week BEFORE in Record World Magazine.  (Probably the least acknowledged source of the three.)

However, after Joel published "The Comparison Book" in 2015, showing the peak position in all three publications side-by-side for the very first time, Forgotten Hits has adopted the policy of quoting a record's peak performance OVERALL in our own chart recaps.  (Billboard's Hot 100 will always be the standard and the benchmark ... but recently ignoring hits of the rock era PRIOR to that chart's official debut in August of 1958 ... and the convoluted way the charts are compiled today ... has cost them a bit of credibility in my book as well.)

Now factor in the reality that the Billboard Hot 100 that first showed George Harrison on top was for "The Week Ending December 26th," and you've got a whole NEW date to contend with.

If his #1 record was good for the week ENDING on December 26th, that means it actually became #1 on December 20th, which is when that chart would have first appeared to subscribers and retailers.

I think the key thing here is not so much the date (we went with December 26th because THAT'S the date you'll find posted on every other "On This Date In Rock History" report), but the fact that George was the first to accomplish it ... the first former Beatle to earn a #1 solo hit.  (Ironically, RINGO would be the next the following year ... but only in Cash Box and Record World ... meaning that it doesn't really count, right???  Then how did TWO of the leading trade publications get it wrong?  Don't get me started.)

As far as I'M concerned, the most definitive chart information out there is our own Super Charts, compiled by Randy Price, showing a week-by-week analysis based on information gathered from ALL THREE CHARTS ... the ONLY way to eliminate some of the gross discrepancies that we see in hindsight along the way.

I am happy to report that The Super Charts return to Forgotten Hits on January 2nd and 3rd ... and will continue every Sunday for 2021 ... as we remember the hits of 1971.

Please join us each and every week as we remember the biggest hits and events of 1971 ... 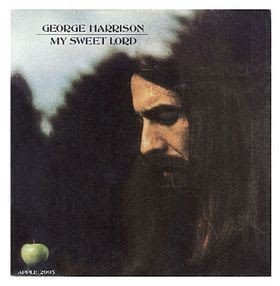