Rather than running a new chart for the last week of 1970, WCFL ran their Year-End Chart instead.

This song never even hit the #1 spot when it was on the charts ...

But you may recall the notation earlier this year when "Raindrops Keep Fallin' On My Head" was singled out as "Still Being Top 10 After 20 Weeks" ... and I've got a hunch that this may have had something to do with it finishing up on top as The Record Of The Year.  (WCFL only charted it for nine weeks total ... and, if you remember, at the time that they made that 20-week claim, it was no longer charting on ANY of the three national charts anymore ... so the whole thing just seems rather odd in retrospect.  For the record, it never actually hit #1 on WLS either ... but charted for 13 weeks because 'CFL didn't publish any charts in December of 1968 and didn't run their first 1970 chart until January 12th.)

In any event, THIS is the way 'CFL recapped the year ... 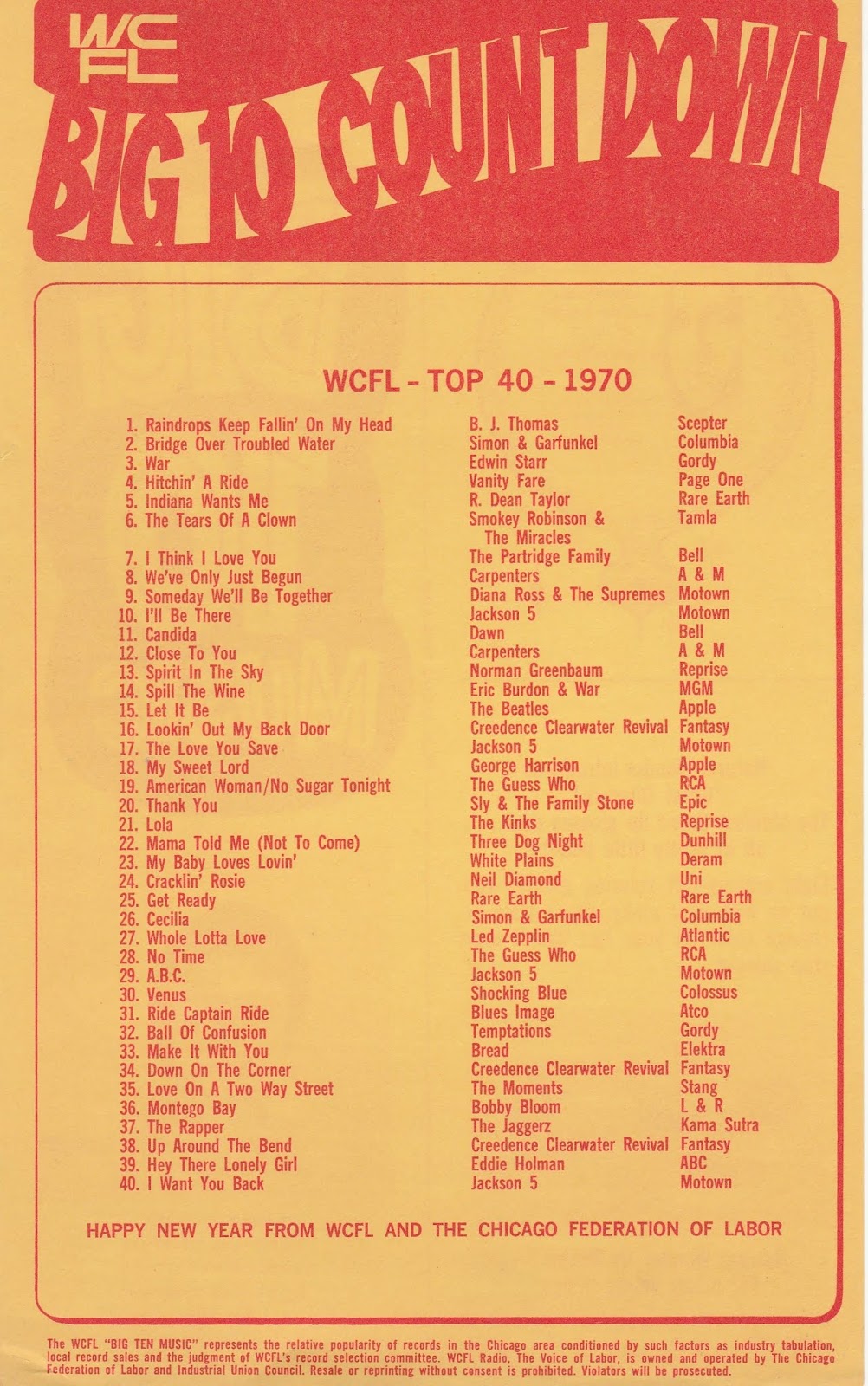 Without question, "Bridge Over Troubled Water" was one of the biggest hits of 1970 ... and "War" topped the WCFL chart for an unheard of seven straight weeks ... yet it only come in at #3 in their Year End Chart ... again, not making much sense here.

"Someday We'll Be Together" making the list at all (much less finishing at #9!) when it was #1 during the month of December, 1969, at a time when WCFL wasn't publishing a chart at all ... and, even when they did start distributing charts again, this record only charted for five weeks and only peaked at #10.

Still, who doesn't love a Year End Countdown?  Half the fun of listening to them is arguing about the outcome!!!

Thanks to everybody who stuck it out with us for another year ... I hope you enjoyed these weekly Fifty Year Flashbacks.

We still have a few 1970 Calendar Milestones to review ...

And we'll be back next year with a look at 1971 with Randy Price's Super Charts ... kicking off soon ... ONLY in Forgotten Hits!


HAPPY NEW YEAR EVERYBODY!!!
Posted by Kent Kotal at 6:00 AM