Further updates as they occur.

Seriously, though, this has got to be either the most bungled news release EVER ...

Or the most brilliant.

Let's face it ... Tanya's name hasn't been in a headline for nearly thirty years ...

And now she's been front page news for three days in a row!

But you've REALLY gotta wonder what her husband / domestic partner (?) and publicist were thinking.

This whole see-saw announcement mess is an embarrassment ... and then to have contrary news phoned in right in the middle of a live interview on Inside Edition???  Seriously???  (I'm sorry, but it all seems a bit staged to me.  I mean, c'mon ... the guy is in the middle of a live television interview and then, precisely timed to coincide with all of this, while still on camera, mind you, he stops to take a phone call, which just happens to be from the hospital to tell him that Tanya, whose passing he's been talking about live on the air at that very moment, is still alive???  This doesn't seem the least bit far-fetched to you???  I dunno ... but I'm thinking that this is worse than the script of ANY B-Movie she starred in while she was still alive.)

But by noon yesterday, the death report was confirmed by The New York Times.  (kk)

This whole fiasco reminds Chuck Buell about why, in these days of social distancing, we may need reminders like this from time to time ...

Where is Chevy Chase now that we really need him to keep us up to date?! Remember?!
(And leave it to you to find that great picture of a young Tanya Roberts!)
CB

I can't help hearing a whole new "Is she ... or isn't she" Tanya Robert campaign playing in my head!  (On the plus side, if she has, in fact, now officially left us, I do believe that this renders her eligible to cast at least one of the 11,000 elusive votes El Presidente is looking for down in Georgia right now.)  kk

Hi Kent,
Just saw the news in Forgotten Hits of Gerry Marsden's passing.  Sad news to say the least.
He and his band definitely were a huge part of the British Invasion.  They sounded a bit different than a lot of the other bands because they had a piano, not an electric piano, but a regular piano that was mixed to give it equal billing with the guitars.  They really were a great sounding band with excellent hits!

When Gerry & The Pacemakers played the Winnipeg Arena, his opening acts were the Deverons, featuring lead-singer Burton Cummings, along with The Guess Who with Randy Bachman (a few months before Burton was invited to be in the Guess Who.)
I remember reading in Burton's blog one time of his meeting Gerry Marsden.  I'm sure Randy and Burton could tell you a some great  stories of that night at the Winnipeg Arena plus the British Invasion's influence on their music and careers.
Speaking of which, when I mentioned to you recently of a late night national music show, the format I had in mind was Randy Bachman's national radio show in Canada on the CBC called "Vinyl Tap."  He plays music and features themes and has countless interesting stories.  On a footnote, Randy Bachman and Burton Cummings are "walking Wikipedias" when it comes to song facts and stories of the music biz.
Believe it or not, out here at night we get Chicago's WGN, WBBM and WLS.  I see where WGN just added the Jim Bohannon Show late night -- just what the airwaves need, another political show.  When it comes to late night, if you don't want to listen to politics or supernatural ghost stories, you are out of luck.
Sometimes on WGN, I catch the early, early "morning show" (during their 4 AM hour)  and sometimes I catch Bob Sirott and the morning team when they come on at 5 AM (but just briefly before the transmitter goes to day pattern -- yes, I listen on terrestrial.)  Bob Sirott does a great job.  Those of us that grew up in the hinterlands only caught part of the "Chicago" shows of Larry Lujack, John Landecker, et al.  You know, when they were on night-patterns, we could catch Larry Lujack's "farm reports," John Landecker's "boogie checks" and maybe a Lyle Dean newscast.  You have to admire Bob Sirott and John Landecker making the transition from "pop to talk."  They now don't have the "safety net" of songs as a general rule for their shows.  I would imagine it is like doing stand-up -- you are out there -- and the crowd is either entertained or "hoping for the hook!"  I would guess it is a whole different ball-game and you find out very quick as to if you have what it takes to make the transition.
Between the pandemic, politics, and the mask and gloves era we are all are currently experiencing in the world, Forgotten Hits "is like hearing that long, lost 'Forgotten Hit' you haven't heard in ages." It's definitely welcome, entertaining reading and viewing.  I mean, let's face it, that whimsical humor from Chuck Buell just might be that ditty, that makes that person hang-up while being on hold with Suicide Prevention!  Ha!  It's no coincidence the first five letters of the word "chuckle" are "Chuck!"  Great stuff!
Thank-you, Kent, for your assemblage of music, information, energy, opinions, and the inclusion of everyone in this community you call Forgotten Hits!
Again, Happy 2021 to you and your family!
Peace,
Tim Kiley
Thank you, Tim ... and the same to you and yours.
I've seen Burton Cummings perform "Ferry 'Cross The Mersey" a number of times during his solo "up close and personal" shows ... he's clearly a fan of this song ... and it very well could date back to that very show you mentioned.
Chuck'll (get it?  chuckle!) will be VERY pleased by your complimentary comments ... he's been a great contributor to our efforts here.  (Twice now plans for the two of us to finally get together have fallen thru, most recently due to this whole Covid mess ... but it'll happen one of these days!)
Thank you for your compliments of our efforts, too ... they are much appreciated.
On to a better 2021!  (kk)
By the way, The Grammy Awards have been postponed now, too ... ideally to March ... but time will tell.  (kk)
Kent,
I gotta tell ya, in spite of spending my entire working life in electronics engineering, I've NEVER seen anything like the Boston Dynamic robots dancing to Do You Love Me.  It made me want to get up and dance.  If I try to dance, I trip over my own feet.
Thanks to C.B. for sharing!
Mike Wolstein
P.S.  ... oh, the socks were cool, too!
Here's a pair that'll be out of style soon.  Maybe.  ;-) 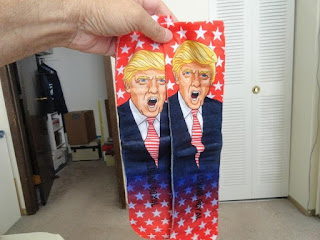 Not so sure about the "maybe" part.  (And you just KNOW The Donald's got a pair of these on right now!!!)  If things continue to go the way they're currently going, we may even catch a glimpse of them as they carry him out in chains on January 20th.  (kk)

Here’s a rare find on You Tube!

In the last couple of weeks, a fan posted for the first time a pristine version of a 1978 BBC Bread Special and the quality is pristine!  Most of the hits are included.

So nice to see music done “live” on TV and not lip synched.

I have watched this special several times before in FAR inferior quality ... you're talking to a BIG Bread fan here ... LOVE their stuff, David Gates' stuff and was fortunate enough to see them a few times both in their prime and as part of their reunion / farewell tour.  ALWAYS a good show.  (I've told the story before how at the reunion show David made the comment that if he had known he would still be singing these songs 30 years later, he would have written them in a lower key!!!  lol)  Outstanding.

And did you happen to catch Barry Gibb on The CBS Sunday Morning Profile this past Sunday?

Tom sent us a link for this one, too.

(Barry talks about the new country album of duets he has coming out, reimagining some of the songs from The Brothers Gibb songbook as well as the recent HBO Documentary Special, "How Can You Mend A Broken Heart?")  kk

>>>Strange thing about this pandemic - I seem to have less time than ever!  It took a while, but I’ve finally figured out why.  I used to sleep about six hours a day ... now I average about nine hours!"  (Danny)

I can relate to Danny's  Slumber Schedule these days.

AND ANOTHER FIFTY YEAR FLASHBACK CHART FROM 1971 ...

There is ALWAYS something going on here in Forgotten Hits!

Start each morning with us ...

To see what oldies fans will be talking about for the rest of the day!