It isn’t very often that you see Forgotten Hits and Rolling Stone Magazine mentioned in the same sentence … I think it’s maybe happened three or four times over the past 22 years (!) … so it was especially cool to see this in Tuesday’s edition of the Times Square Chronicles!!!

I honestly didn’t think my coverage was all that extensive … it WILL be once we get the whole series back up and in circulation again … and truth be told, although I’ve heard quite a bit about it, I have yet to read the Rolling Stone article on Phil Spector … I just haven’t had the time (but fully intend to.)

Still, it is QUITE an honor to know that anyone out there would even dare to think so … so thank you.  (Readership has definitely been up as a result)

By the way, the FIRST time it happened was about fourteen years ago …

In fact, the quote still graces the “home page” of the other Forgotten Hits website …

Forgotten Hits is what Rolling Stone Magazine USED to be ...

Trust the art, not the artist — isn’t that what they always say?

Notorious music producer and convicted murderer Phil Spector died Saturday at the age of 81. We thought his 1966 production of Ike & Tina Turner’s “River Deep—Mountain High” was due for some reconsideration. So, thanks to Eric Miller at Magnet for reviving this classic piece!

Shout out to my old NPR producer Bob Boilen for doing an audio version with me for All Things Considered back in the day. That link is within the story as well.

And hats off to Harvey the K.

Since we're talking Harvey Kubernik, check this out ...

Harvey just sent us this interview he did with Stan Ridgway in 2002, covering Gold Star Recording Studio and Phil Spector’s Wall Of Sound … and how all of this inspired him to name his band Wall Of Voodoo in the 1980’s …

In 2002, I had lunch in Venice, California, with Stan Ridgway, musician / songwriter / vocalist, co-founder of Wall of Voodoo in 1977, who had a hit single supported by video rotation on MTV in 1983 with "Mexican Radio."

Since 1984, Ridgway has carved out a solo career. Stan collaborated with Stewart Copeland from the Police on the song "Don't Box Me In" for the soundtrack to Francis Ford Coppola's "Rumble Fish."

Stan cited the landmark Hollywood-based Gold Star recording studio and Phil Spector's "Wall of Sound" created on the premises as the reason he named his former band Wall of Voodoo.

“I tried to go to Gold Star Recording Studio in the early '70s when I first moved to Hollywood from Pasadena. My goal was to be a janitor and empty trash at Gold Star.

Nobody was there except the engineer and co-owner, Stan Ross.  And he was sitting there in the engineering booth.  ‘Look, Mr. Ross, my name is Stan and I'd like to work here.  I love the stuff that has come out of this room.’

Obviously, everything had already happened.  There had been tumultuous activity, but that was long ago.  So I sat with Stan, and he said there was no work available.  Then I said, ‘Is that the board that did all the stuff?’  ‘Yeah.’ And he was very nice to me and gave me a tour for a half hour.  I got to touch the faders and see what was done.  Then I went into the small room.

That's where Wall of Voodoo came from.  I tore Phil's records apart, and I tore Brian Wilson's records apart.  Wall of Voodoo started way back when I was trying to form a soundtrack company on Hollywood Boulevard across from The Masque [punk club] before it happened.  And I used to call it Acme Soundtracks.

When the rhythm machines came in, I used to collect them, [Ridgway had a Kalamazoo Rhythm Ace drum machine] and make [Farfisa organ-driven] recordings where I would 'wall-of-sound' these rhythm machines at the same tempo to build this sound.

I said, this is like a 'wall of sound.'  Then someone came in and said, 'No, it's a tropical voodoo thing.'  And I said, 'It's like a 'wall of voodoo.'  We laughed and joked.  We never thought that would be a name for a band.

I know later in the '70s, Phil Spector produced Dion at Gold Star.  And I loved Dion.  Another guy and voice who I really communicated with his whole swagger.

And later, when I further investigated Phil's records, I discovered who the 'wall of sound' players were.  It coincided and dovetailed with my examination and involvement in jazz.  'Hey man, that's Barney Kessel playing guitar in there.'  And the West Coast jazz cats doing stuff with Phil - and they had jazz records - were gigging and recording with Shelly Manne.  So everything made a lot of sense.

I really admire [arranger / composer / producer] Jack Nitzsche.  I met with him on the suggestion of an A&R man from Geffen Records at Ben Frank's [restaurant] in Hollywood.  It was great.  And Jack told me I didn't really need a producer.  He wasn't trying to get a gig out of me.  Jack was very honest with me.  I was a little nervous meeting with him.  He heard my four-track demos, and said, 'Get an engineer and do it yourself.'

I just read in FH about the passing of Jimmie Rodgers and just now went and played TUCUMCARI ... one of my all-time favorites by him.

And this from Chuck Buell ~~~

(who just may owe his broadcasting career to the late Jimmie Rodgers!!!)

I was saddened to read in Forgotten Hits that late 1950s Hitmaker Jimmie Rodgers passed away earlier this week ( January 18th ).

Like in many towns and cities of the late 1950s, one of my hometown radio stations had a special, Saturday afternoon, hour long feature where four Junior to Senior High School students were each given one of four fifteen-minute blocks to present their shot at being a “Teenage Guest Disc Jockey!”

After the hour was over, listeners would call in and vote on who they thought was the “Best Teenage DJ of the Day.”

As an “I Always Knew What I Wanted to Be” kind of Kid, I jumped at the opportunity, and was selected as a Junior Higher to compete on no broadcast basis whatsoever, but rather than being a needed contestant for their radio program.  ( And I think I was probably the first to call in when I heard about it, and say “Pick me! Pick me!” ).

Fast forward to after that memorable Saturday Afternoon hour when I won!

To this day, I think a big part of winning was choosing the right music for my segment. While the others that day picked, as I remember, some pretty lame musical selections, I chose five great songs from one of my favorite albums in my personal collection.

The album was “Jimmie Rodgers – His Golden Year.” 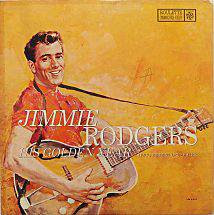 To this day, I think his music was a big part in successfully setting me apart from the others which resulted in my winning.

From his "Golden Year'' to my Golden Years, thank you, Jimmie!

Reading Forgotten Hits recently I feel like a kid again with you writing about some of my favorite TV shows and certainly BATMAN was one of those!

One of the perks of working in radio is you get a chance to meet, and sometimes work with, people you admire in music, TV and movies.

Several times during my two decades at WPLJ-FM in NYC, I had a chance to work with Adam West.  Whether he wanted to promote an upcoming TV appearance or was making a personal appearance at a Nostalgia show in the tri-state area, we always made him feel welcomed.

He had a very dry sense of humor and as I got to know him when he answered a question with his deep authoritative voice, I sometimes had to hesitate to figure out whether he kidding with me or not.  Either way it was fun.

During my WPLJ days every fall my wife and I would host an event at our home for all the station staffers, their spouses and kids.  We would have about 200 people on hand and we’d set up our front lawn like a carnival.  We would rent game booths and staffers and their family could play games and win prizes.  We would have a magic show for the kids and all the food and ice cream you could eat!

Back in the '90's when we started these annual parties, Nick at Night was popular, so we had the idea that since both kids and their parents were watching these old TV shows together, we would invite a retro TV star to the event, so the families could meet, have their picture taken and get an autographed photo with the celebrity guest.

One year Adam West was going to be in NYC for an autograph show and I asked him if he would stay overnight and make an appearance at our ‘PLJ “Fall Fling.”  He graciously agreed and I sent a Town Car to pick him up in NYC for the ride to our Connecticut home.

When he arrived, we fed him and then he asked, "What would you like me to do?"  I said, "We have a booth on the lawn with a photographer and 8x10 photos to autograph" ... and Adam spent the next 90 minutes out in the September Sunday sun meeting the families of our staff.  He made it very memorable and even after all these years, I occasionally have former staffers mention to me they still have their picture with Batman and the warm memory of how charming and funny he was.

Because all our staffers drove to our house, the neighborhood was inundated with cars parked on both sides of the streets.  At one point, a police cruiser drove by and stopped.  He wanted to know why there were so many cars parked in the vicinity,  plus some vehicles were parked illegally.   But before I could explain what was going on, the cop noticed Adam West.  The officer said “Excuse me, but is that Batman standing on your front lawn?”  I acknowledged it was and before I could say anything else, Adam walked up to me and the policeman and said:

“Officer, is there a problem?” 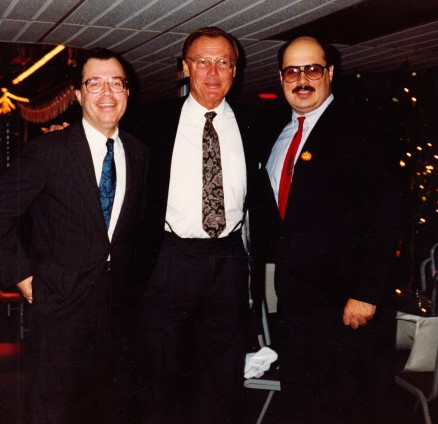