This just may be the most difficult review I’ve ever had to write.

Thanks to a little help from FH Reader Tim Kiley, I was able to make my way into the Bachman Cummings Manitoba 150 Concert Saturday Night.  With their tour now officially cancelled, I figured this would likely be my last chance to see these two rock and roll legends perform together … and there was just no way I was going to miss it.

Sadly, Concert in a Word:  Awful!

And by awful, I mean absolutely awful … 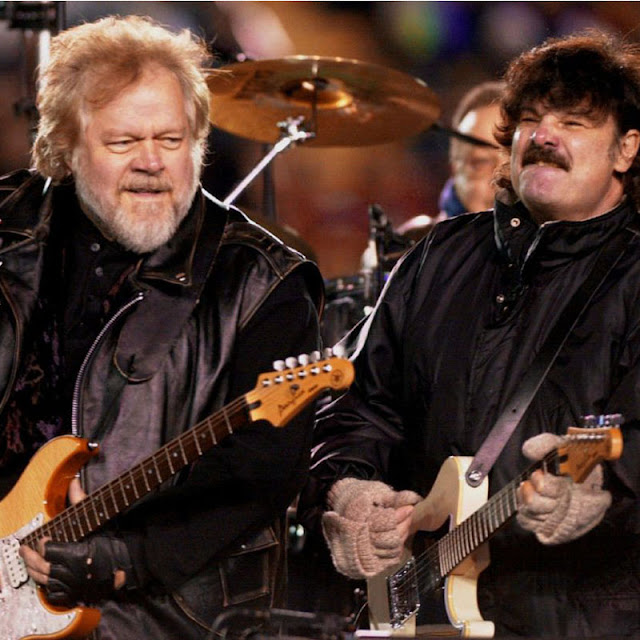 It was painful to watch.  Burton Cummings was struggling from the very first note …

His voice cracked on virtually every line sung or spoken thereafter … and let’s face it, it isn’t Randy Bachman’s singing voice that he is best known for.  As such, the show depended on a strong performance by Cummings … and that just wasn’t happening Saturday Night.  I truly felt sad as I had looked forward to this reunion for SO long.

It was obvious that he was struggling … and while I get the whole idea of “the show must go on” … and the fact that this was such a prestigious event that they had been asked to headline ... I know that this was viewed as a true honor by both musicians … but instead of coming off as Canada’s Elder Statesmen, this time around Randy and Burton simply came across as “elderly.”  It is NOT the way they would have chosen to go out, leaving this final impression on their legion of fans.

I have written more than once in my reviews of Burton Cummings shows recently that he was physically incapable of putting on a bad performance … you were guaranteed of getting an excellent show each and every time he took the stage.  Sadly, this is no longer the case as evidenced Saturday Night.  When their voices blended (and I use this term VERY loosely, as they never really meshed at all), it was actually cringe-inducing.  I have to confess that after waiting SO long to see it, I turned the concert off after the first half hour … it was just too painful to watch and listen to.  It is NOT the way I wish these guys to be remembered.

(I will tell you this now in confidence that I never published my last review of a Burton Cummings concert as it, too, was so sub-par that I didn’t want it on record, acting as a blemish on his otherwise perfect concert career.  I attributed that decision at the time to the old adage “If you can’t say something nice, don’t say anything at all.”)  But I do have a duty to our own legion of fans and faithful readers (who depend on me to do so) to report these facts truthfully and accurately … and, based on Saturday Night’s performance, I don’t see ANY way these guys would have ever been able to sustain the pressures of a full-length tour.  Perhaps in this case, the postponements acted as a blessing in disguise.  (Which is not to say that perhaps it was these continued lay-offs that helped to contribute to the state of their performance Saturday Night … but I have to believe there is more to it than just that.)

Burton has confided to me in the past that he feels very lucky that he’s been able to enjoy the last several years back on the road again, playing to excellent response from his audience.  He has actually said to me that “As long as my voice holds out, I can hopefully do this for a few more years.”  After Saturday Night’s performance, I have to say to Burton that “Maybe it’s time.”

But the truth of the matter is they are doing a true disservice to Burton as a respected artist.  This is NOT the way he would wish to be remembered … and if no one else will say it, then I will have to do so.

One thing Burton Cummings has always done over the course of the past ten years is encourage his audience to take as many pictures and videos as they like ... and to feel free to post them on their own social media.  It was spoken with absolute confidence because, as I alluded to earlier, he knew that he was going to give his audience a great show every time out ... and would be proud of anything that they posted.

Watch back the concert tape from Saturday Night's performance, Burton, and see if you don’t agree that this is simply no longer the case.  If you feel it was just an “off night” or there were health reasons contributing to this sub-standard performance, then go ahead and tell me I’m full of shit … tell me to fuck off and leave you alone, and I will do so … but I think I know you better than that … and by that, I mean that I know and understand what is truly in your heart as a performer, proud of your unmatched legacy and the standard of which you have always chosen to present it … and feel confident that once you see this footage, you will know in your heart that I am right.

Thank you for all of the magic you have provided us with for the past 50+ years … THOSE are the memories I want to keep close to MY heart.