I turned 15 in spring of 1971.  I moved from my childhood home of Dodge City, Kansas, to my birthplace of Lincoln, Nebraska, in the Summer of ‘71.

I had grown up on the ‘60's WLS era DJs and music and I really did not think music would "devolve" soon in the coming years into disco fever.  1971 had not been 1967, but it was darned good -- if you listened to the stations I did and HEARD the songs I heard.  In these five radio bits, you get a true feel for what was popular at the time on Top 40 and FM.  SO many religious styled tunes like the Rascals and Rick Nelson and Ocean (sounding like gospel groups), bubblegum, soul artists' affection back then for doing their versions of white artists' previous hits (a bit of a reversal from a decade earlier), LP cuts being played much more now (Note:  KLMS' survey is half 45s / half LPs!) and the sudden popularity of the banjo with Stampeders and McGuinnes-Flint!

You will hear memorable spots of Dairy Queen, Frostie, K-Tel, Halo Shampoo, Dentyne, Roman meal ("the growls"), Dr. Pepper, STP (I used to drive my brother crazy playing this in the morning to wake him up).  You get concert events like Ballin' Jack, Sly & Family Stone (Go figure -- Sly has already cut his show from two to one on the day it is scheduled!)

There's up and coming artists like Boz Scaggs, Rod Stewart (WLS plays the long version of "Maggie"), Pickettywitch, Supertramp (altho stardom was WAY off then), TODD Rundgren (the DJ makes fun of the artists, then still known as "Runt"), Christie, Chase, the Bells, Chicago, Sounds of Sunshine, Lighthouse (I woulda sworn this was the Ides then), Coven, Free Movement, and Isaac Hayes (Cryan’ Shames' Dave Purple would win a Grammy in 1971 for his engineering work on "Shaft"!).

AND artists well known, but lately without big hits such as Cher, Mary Travers, Bob Seger, the Hollies, R. Dean Taylor, Tommy Boyce, Searchers, Lulu, Rascals, Fifth Dimension (doing THEIR version of the Cryan’ Shames’ last 45!), New Colony 6, Fortunes, Carole King, Bee Gees.  AND the station jingles from the cheaper to the expensive PAMS and the stereo FM ones!!

In the download attached, I have five audio files depicting the radio scene of 1971 for both AM and FM.  The differences were widening to the most yet between the mediums, but you still heard FM and AM both playing Three Dog Night, Clapton and the stalwarts of pop rock.  Yet, AM Top 40 WAS indeed growing more towards teenybopper stuff, while FM was trending as far away as possible from bubblegum, despite still holding firm on at least playing them some.

SO, I moved to Lincoln almost halfway thru 1971 on June 1st.  In the files, you will see what our Dodge City small time market station played that March and on the audio recorded the month I left Dodge, you get the somewhat unpolished DJ, but playing some cool stuff you would not hear on big city stations.  KEDD was always that way, thank God.

Next, you can see what we listened to for three years in a row on FM in Dodge.  KEYN-FM Wichita basically supplanted WLS in those years of ’69 – ‘71 mostly for me.  STEREO was so cool to hear on radio, and KEYN was playing great stuff and making great use of the stereo medium.  Their DJs were great and their jingles were some of the BEST I have ever heard.  They had Wolfman Jack's syndicated program on weekends.  PLUS, this was where I first heard and recorded AMERICAN TOP 40 and the Rock Christian show, Powerline!  What a great show AT 40 was!  Casey doing his quizzes and debut charting hits and special info.  You get some of that (fading in and out from Wichita some) as well as some PAMS TRUE STEREO jingles they used.  Unfortunately, I had transferred the aircheck bits in mono, so they should be stereo but aren't.

In Lincoln, a bigger market but still doing smaller market programming including having a nightly vote your choice that would culminate Fridays with a winner of the week's new records getting charted on the survey!  Great stuff got airplay this way, like the Ides, NC6 and Coven from Chicago. KLMS was cool to listen to in that 50 years ago summer while I awaited what it would be like to be in a big city high school.

I have included several charts from this week basically in 1971.  There's WLS, KLMS, KEYN-FM and KRCB-FM in Omaha (Council Bluffs, Iowa, actually.)  You can see differences in these charts.  Also, there's my PERSONAL weekly chart of my top 152 singles (and LP cuts), as well as my Top 50 LPs as voted on by ME, the KPTL-FM program director!  1971 was probably my most prolific year for weekly charts with some weeks having a top 200 + the LPs.

[We'll run these charts tomorrow in Forgotten Hits, along with several other 1971 charts from across the USA! - kk]

That brings me to another market I was often hearing on vacation, Halloween week in Denver.  You get Chuck Buell's OLD stomping ground chart of KIMN-AM as well as KLZ-FM and Lincoln's KLMS from that week.

Another first in 1971 was a great AIRCHECK album put out by Mega Records -- the first of many in the 70's after it.  It was called "Bootleg Top 40, Volume 1."  It was an audio tour of the top stations in the country doing their thing ON VINYL!  I had to cut out a few stations on side 2 due to a crack that made the record skip, but you still hear 40 top markets and jocks playing top 40 radio AS IT HAPPENED in 1971!  In the download are the two papers that came with the LP. 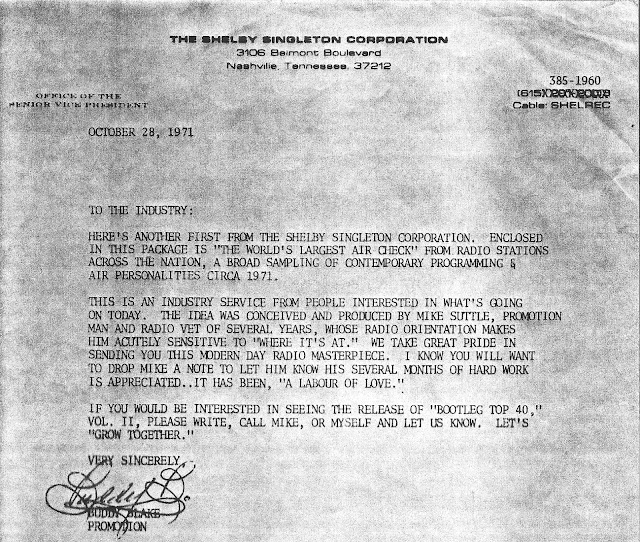 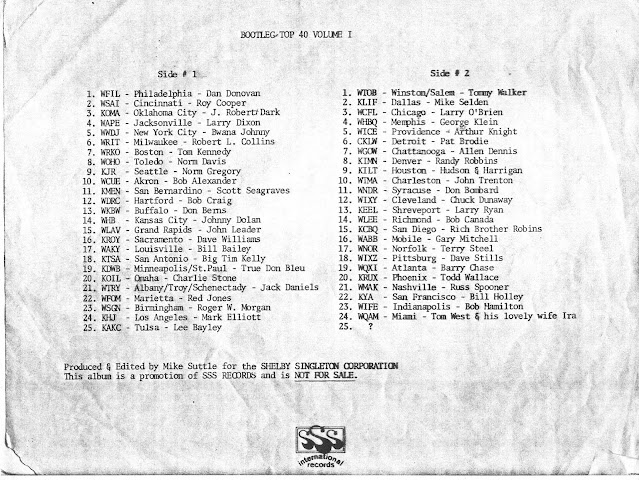 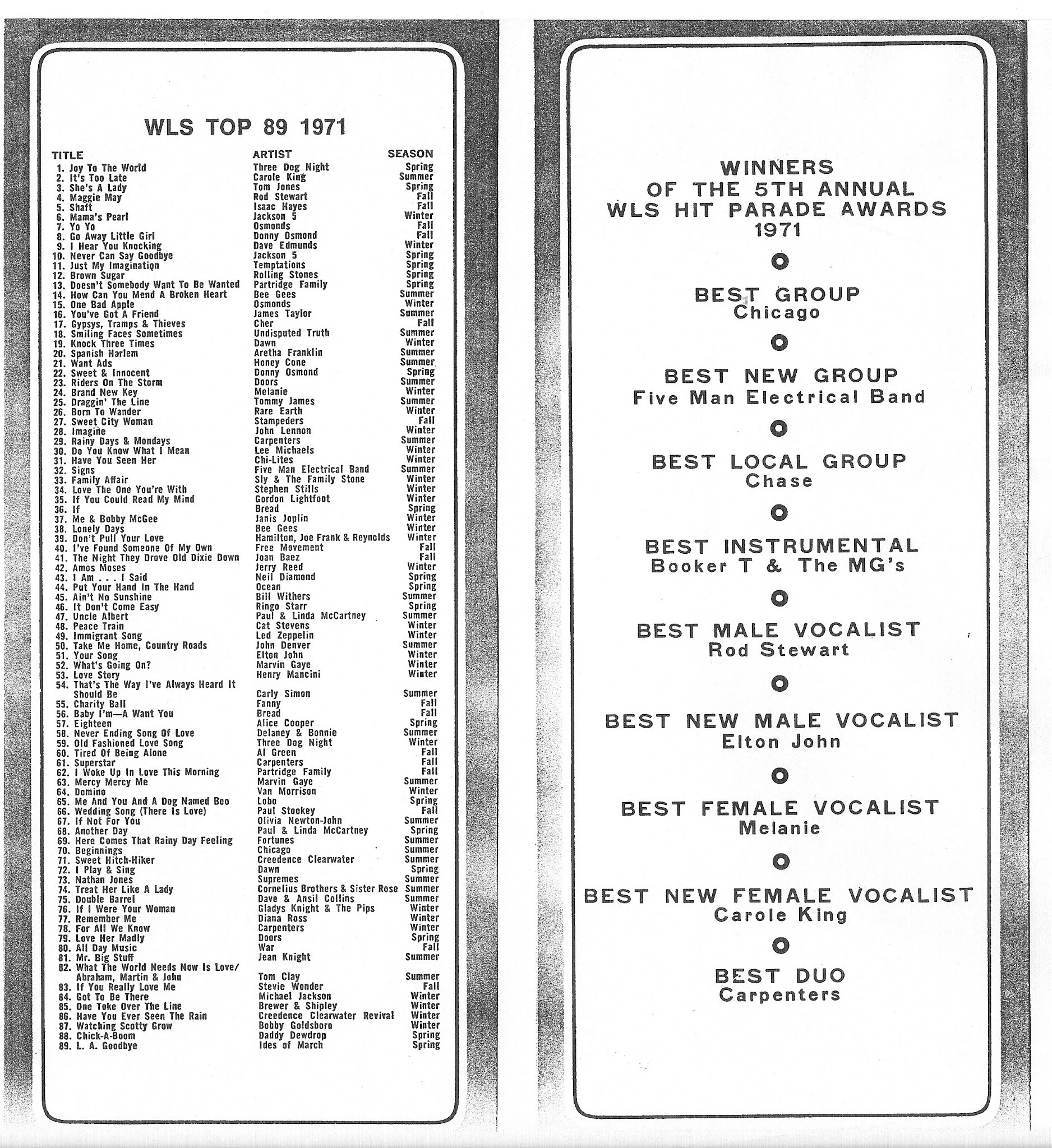 The audio here is about #24 to #1.  IF you ONLY listen to this file, you will think 1971 was very lame.  There are NINE teenybopper / bubblegummers in the bunch!  Osmonds, Jackson 5, Partridges ... How many people hear WLS' #6 for the year, "Mamas Pearl?"  Maybe those smaller market stations DID play better music?  Can't argue that the WLS jocks like Kris Erik Stevens (who tried a hit record with a Jim Peterik song that year, too) could be much better than they were, tho.  Great talent -- Chuck Buell, then doing early afternoon slot, noon - 3 PM. At the end of the WLS audio segment, some of PAMS' 1971 series called "Pop Tops," where they would sing lyrics and station call letters ahead of the vocal of a song.  Followed by a PAMS 1971 promo piece for WLS.

One cool item was that WLS, KEDD and KEYN-FM were ALL ABC affiliate stations!  KLMS was not ABC, but they had one great feature they ran daily that Larry Lujack also ran daily featuring Dr. Armadingo, Nurse Durkin and the ever-popular Tooth Fairy (“you the saw bones?")!

As I mentioned above, I was TOTALLY into being the next WLS Superjock and programmer and into radio surveys and the music and BILLBOARD magazine, too.  I had loved the Billboard 1970 year end magazine and patterned MY year end 1971 extravaganza around that issue.  I have included 10 of the 19 pages that are filled with charts similar to the ones that Billboard made back then in their year end issues.  Can you believe I made those cover sheets using a manual Royal typewriter?  I made pie graphs and I used stencils for my graphics weekly as well.  I traced those using rulers, protractors, etc.  Insane, yes, but I loved it!  I even made the honor roll while doing this stuff! 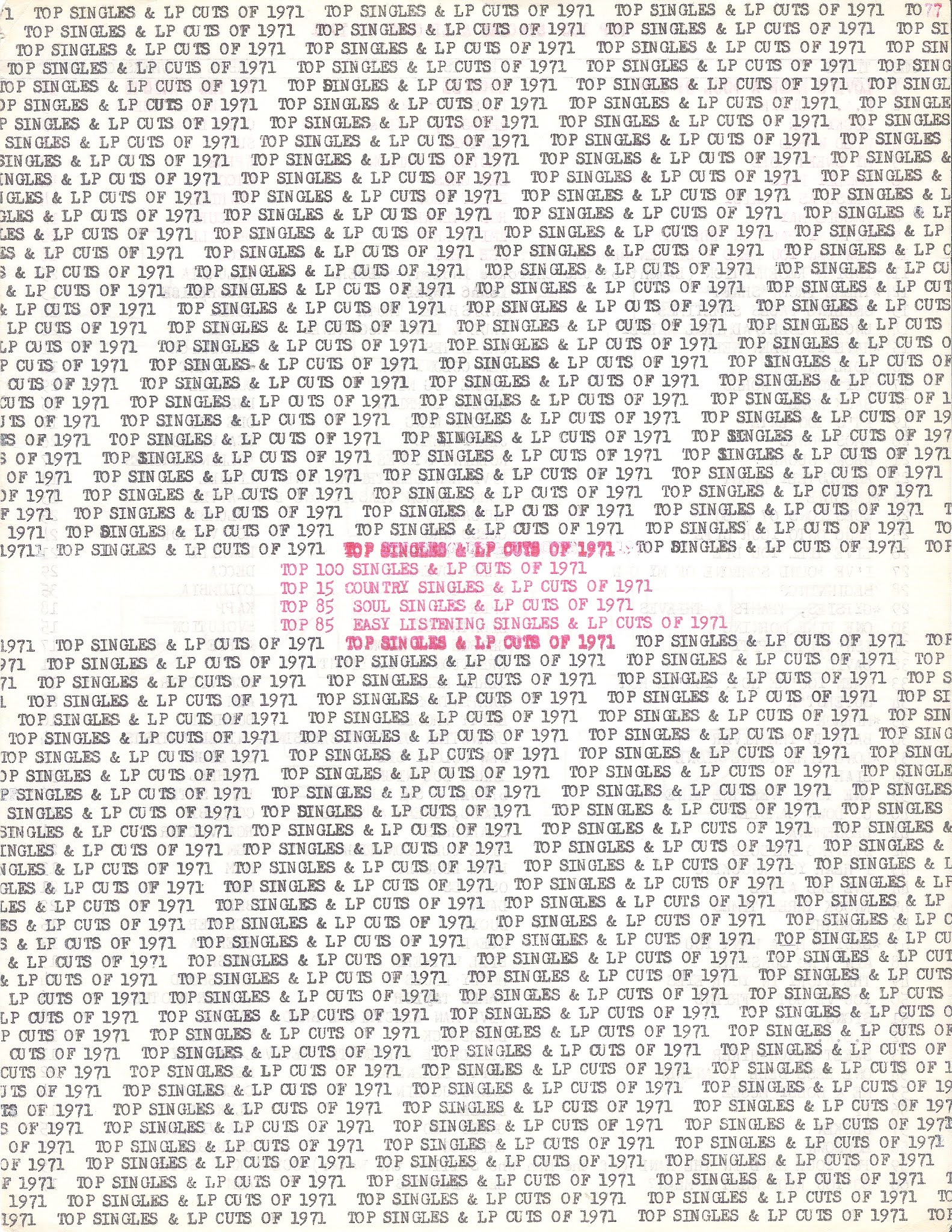 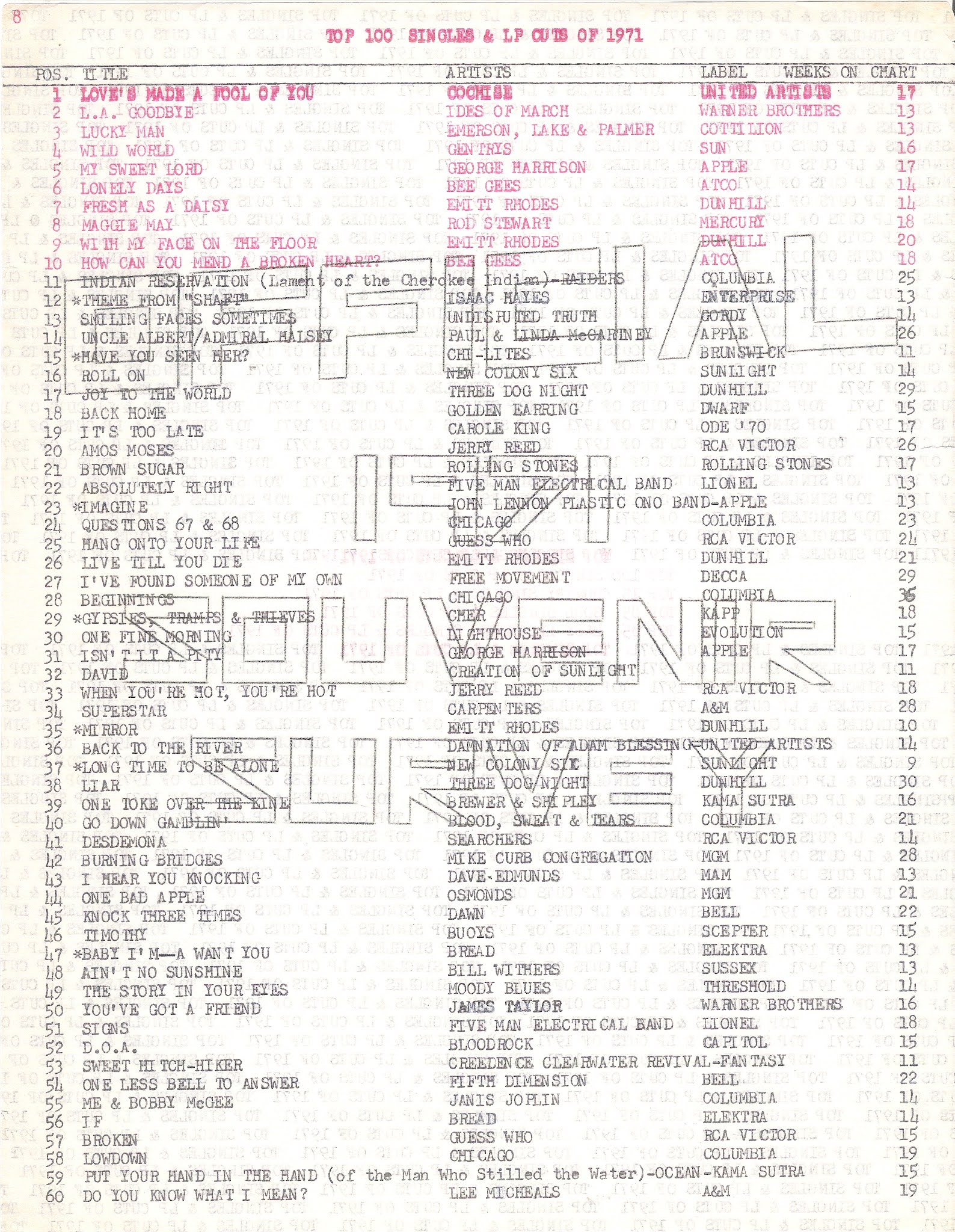 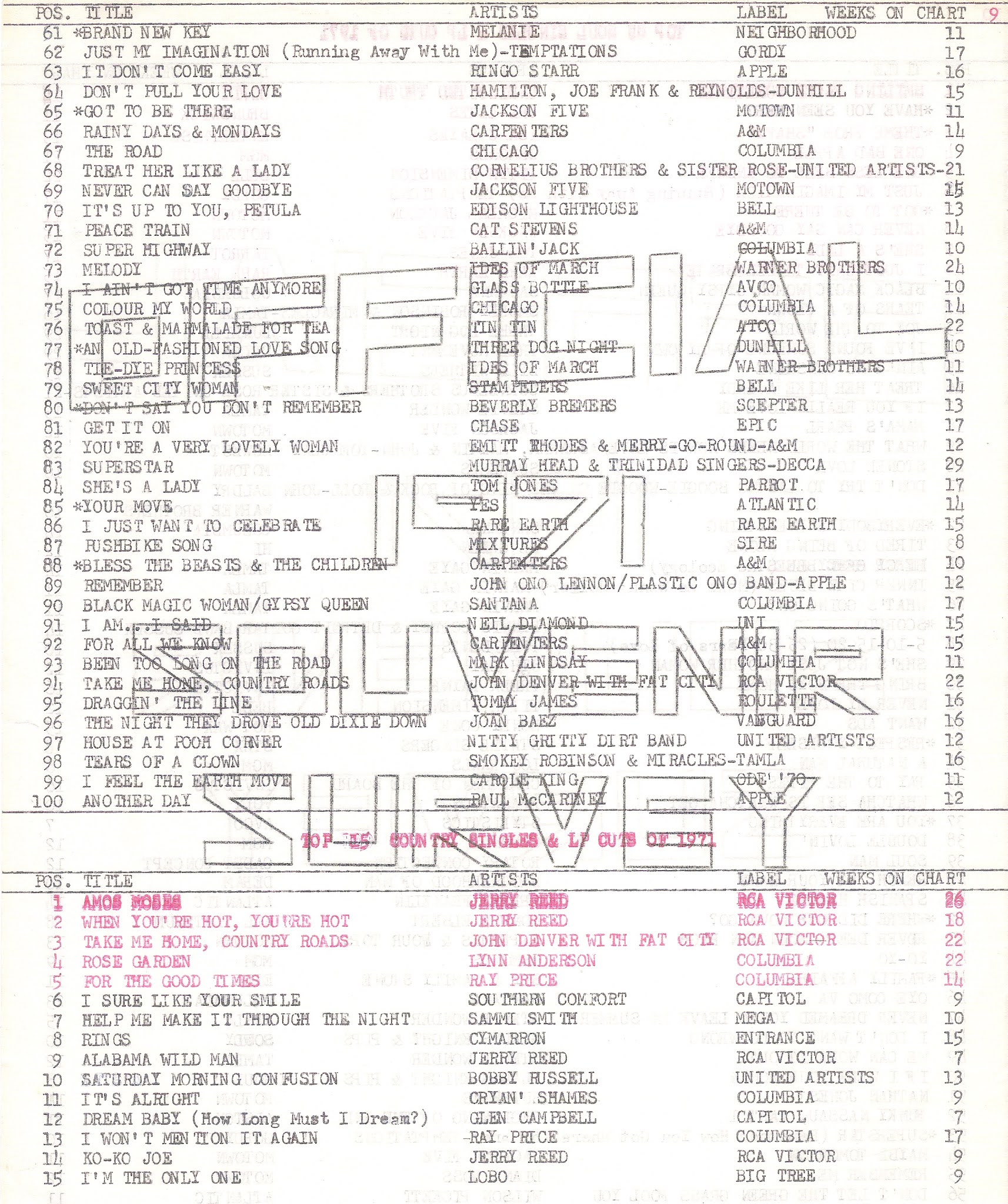 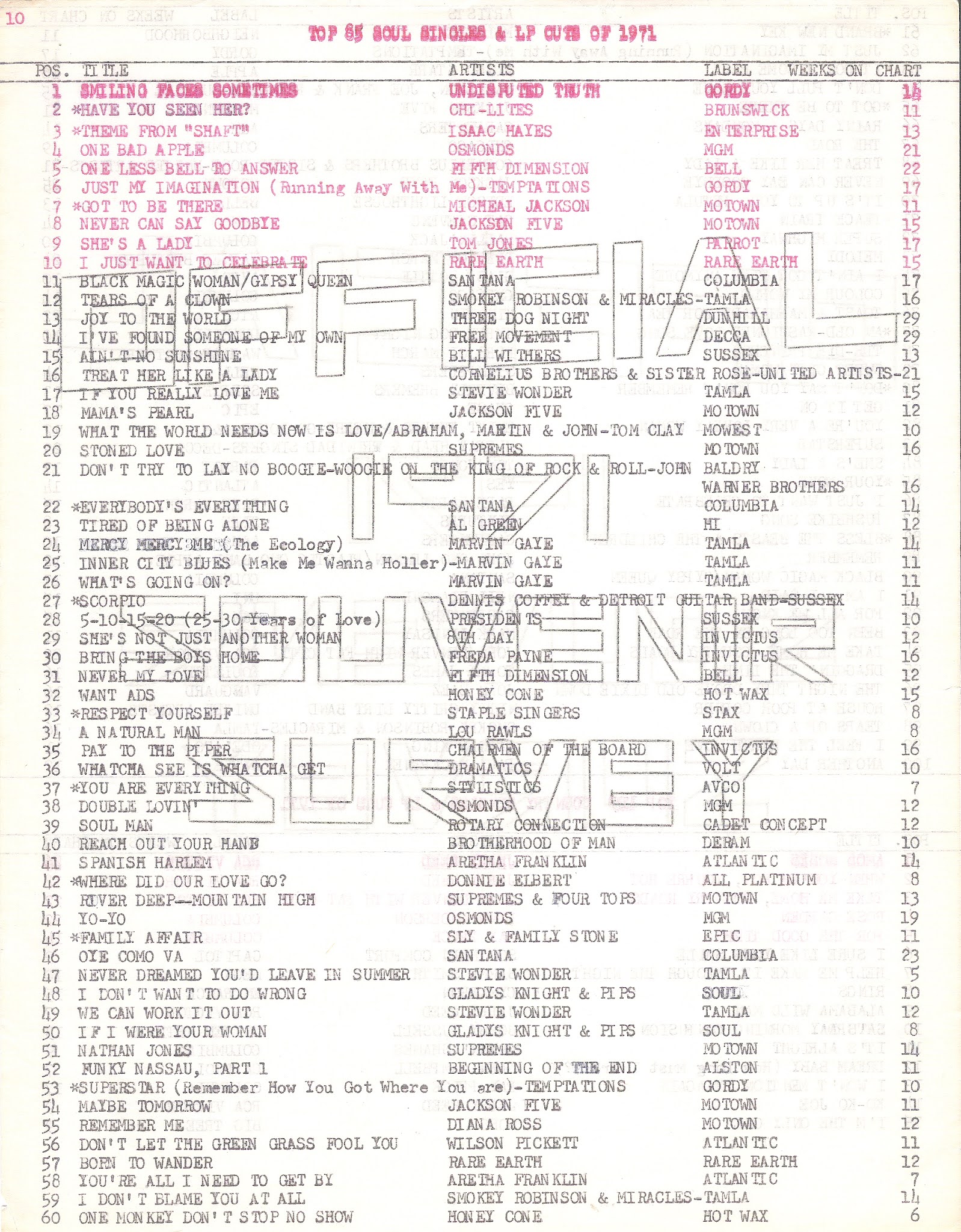 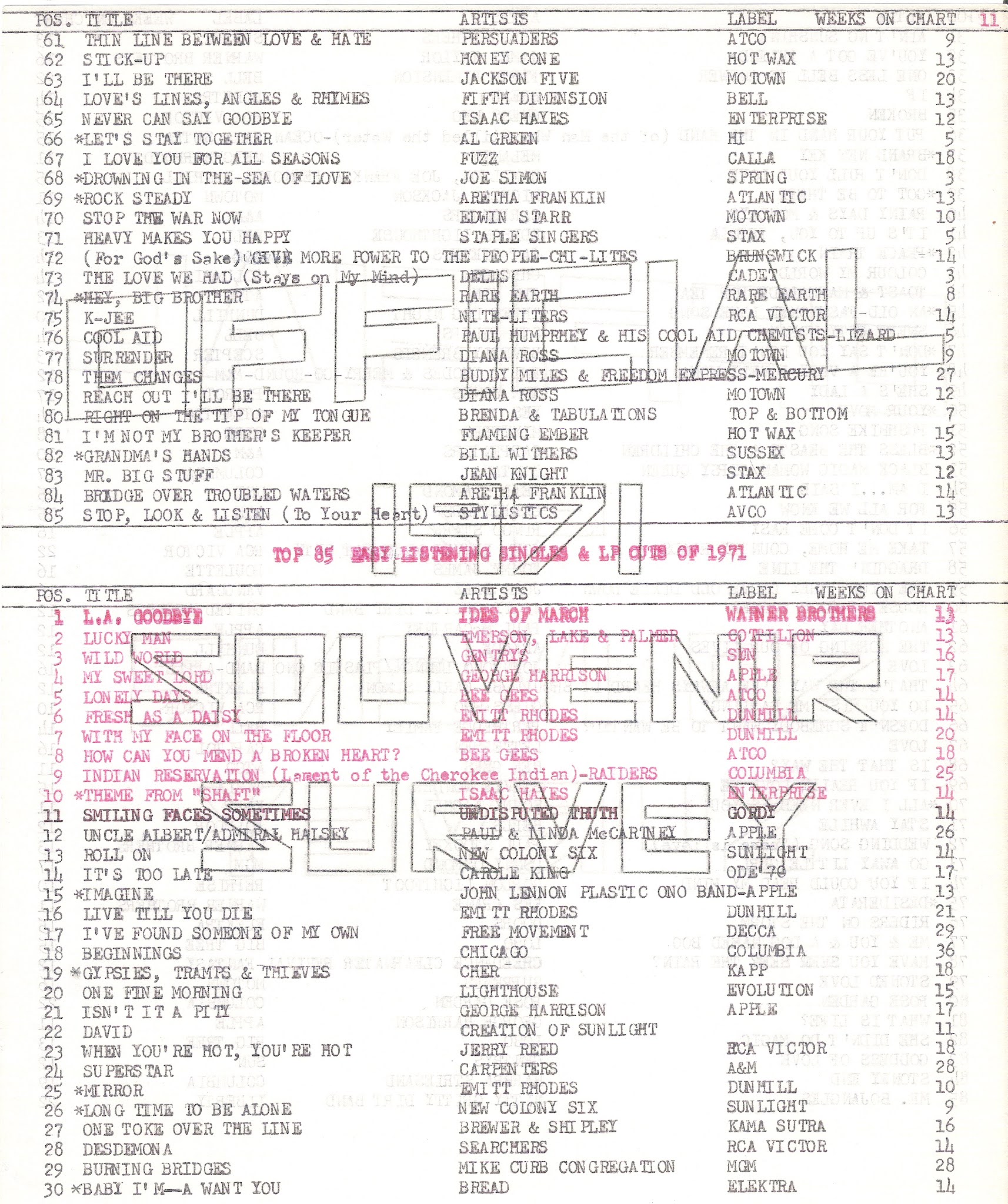 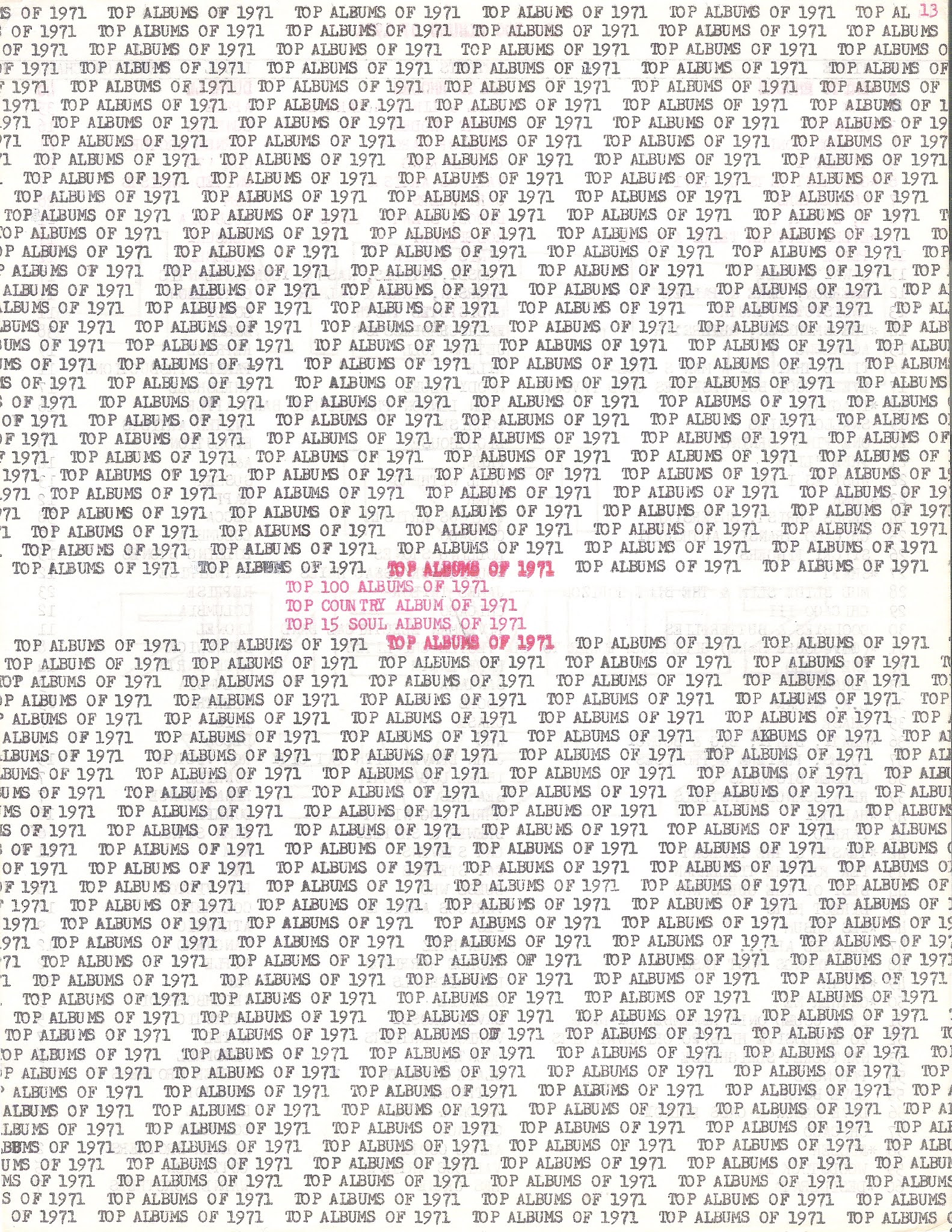 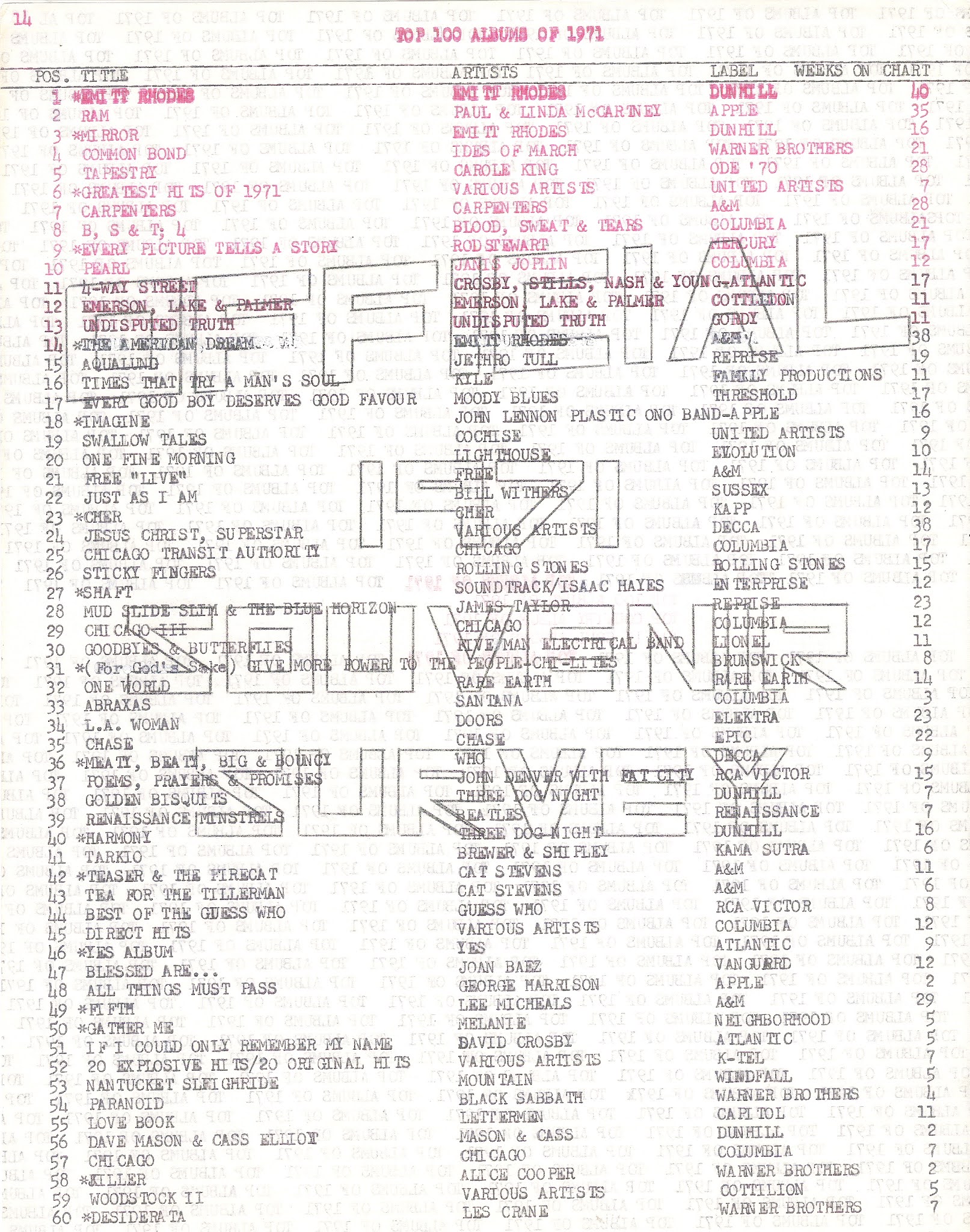 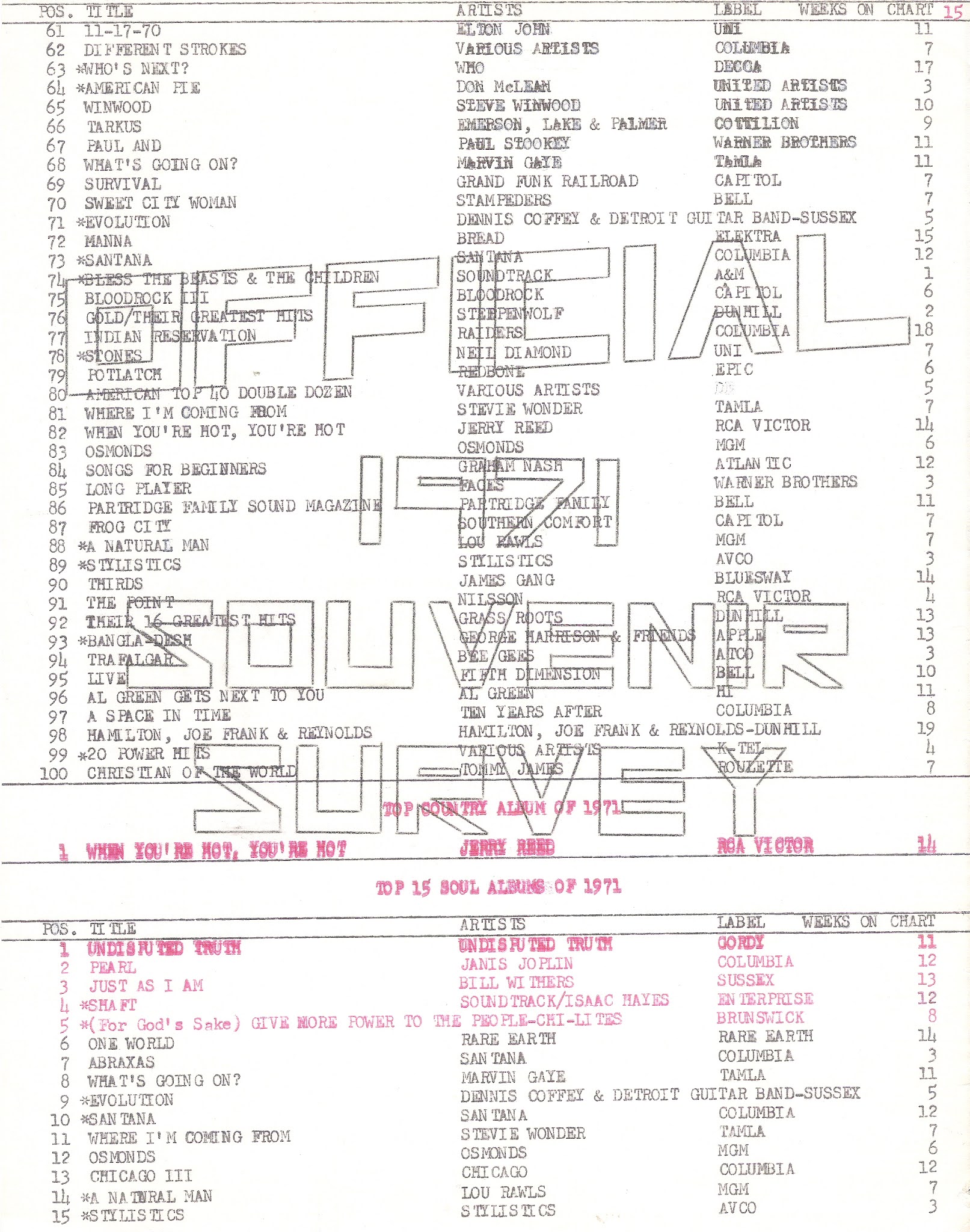 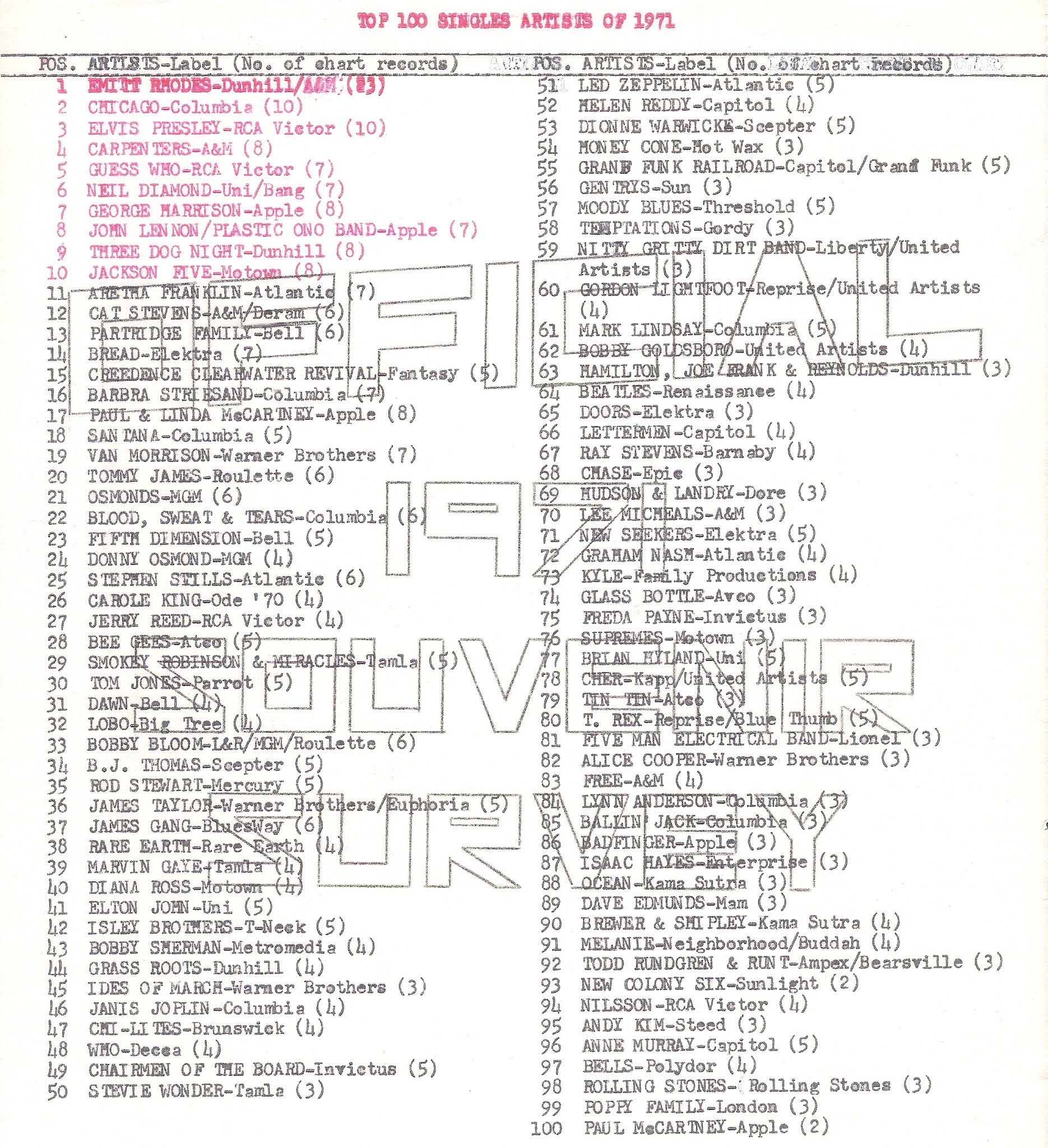 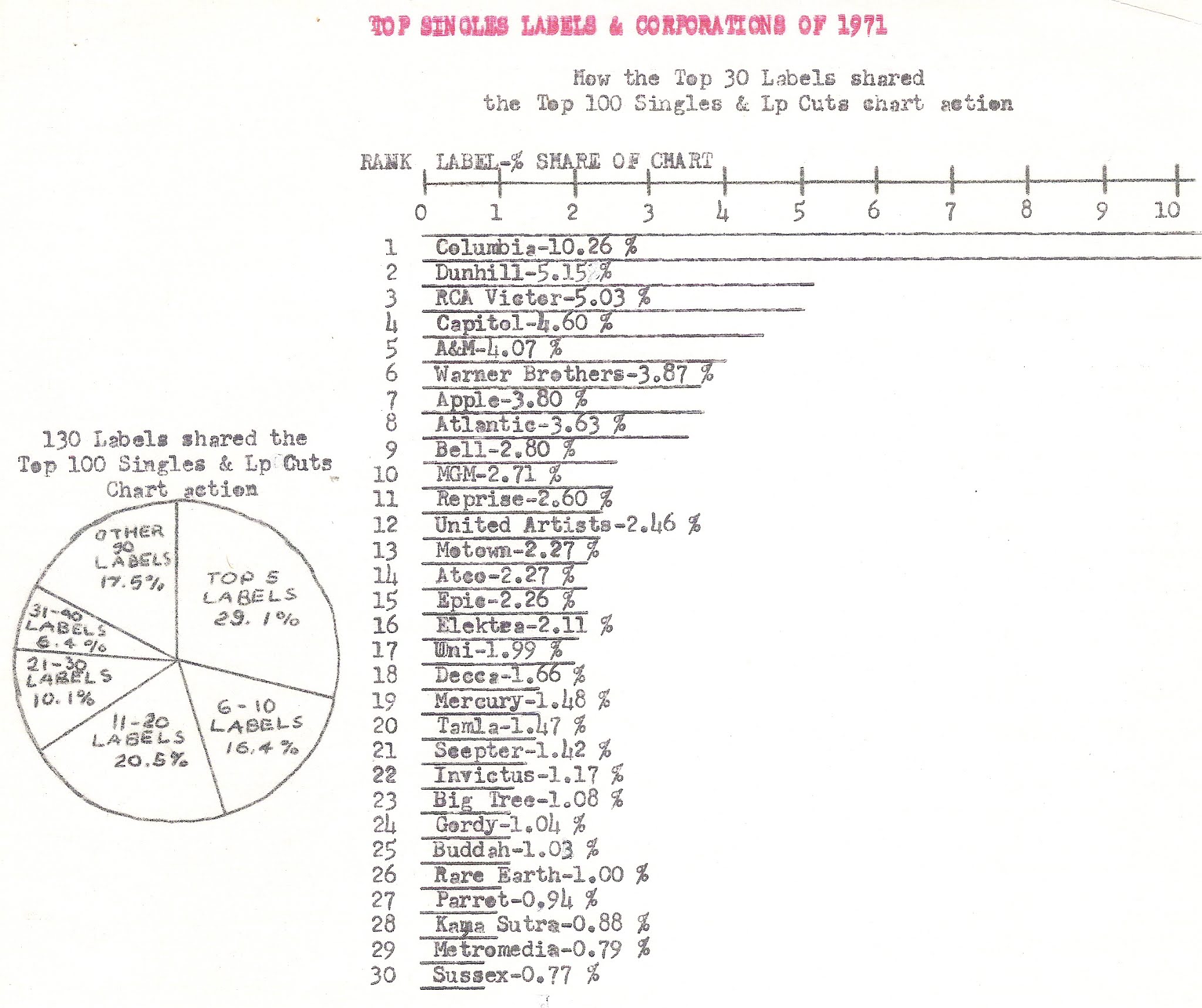 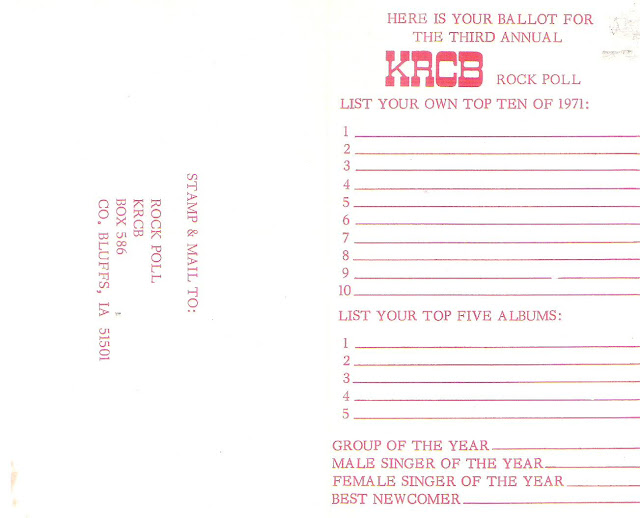 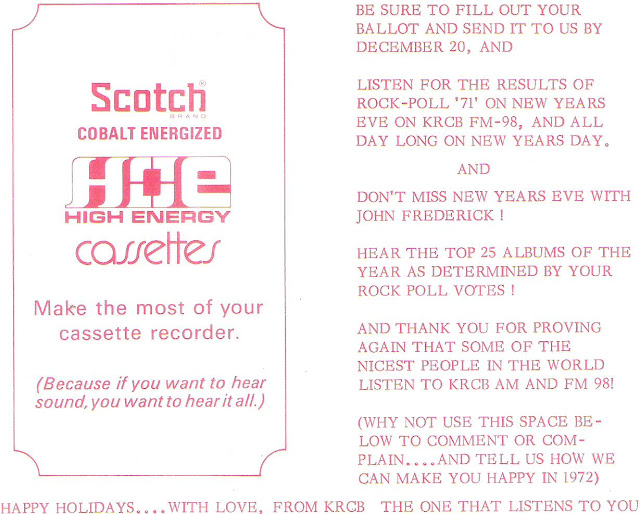 SEE Billboard's 1971 end of year charts here.  Staring with Page 22, you can scroll down thru them all.

"Keep your feet in the ground and keep reaching for the stars!"

Putting together The Top 40 Fan Favorites for a countdown that we'll be doing on Phil Nee's WRCO "Those Were The Days" program reinforced with me just how great some of this music really was.  (I had a HELL of a time narrowing my list down to a Top 20 ... and then ended up adding twenty more "Honorable Mentions" and two "Guilty Pleasures!"

All of this should make for a GREAT countdown.

We'll let you know when and where you can hear it.  (kk)

More great charts from all over the country, circa 1971!

(all courtesy of Clark Besch)