How MAGGIE MAY Became A Hit ... Is There REASON TO BELIEVE There May Be More To The Story???

Yesterday, we published a letter from longtime Forgotten Hits Reader Jack Levin, telling us all about how Chicagoland DeeJay Mitch Michaels found out well after the fact that Rod Stewart attributed turning his first solo single, "Reason To Believe" / "Maggie May" over (and pushing the B-Side instead of the intended A-Side) allowed it to become a chart-topping single ... and one of the biggest hits of all time.

Levin cites Mitch's own book, "Doin' The Cruise" as the source of this brief history lesson.

(Here is a copy of Jack's email that ran yesterday in FH):

There is an indirect Chicago connection as to the song Maggie May all of sudden getting promoted.

Well known Chicago DJ, Mitch Michaels, was attending a Rod Stewart / Faces concert. At the time, he was filling in at WMMS Cleveland. He had met Rod once before and was backstage milling around when he ran into Rod again. They chatted briefly and Rod invited him to ride in his limo and offered to buy him a drink. They chatted about the album, Every Picture Tells A Story, and Rod asked him what his thoughts were. Mitch replied that Reason To Believe was a great song, but the requests for Maggie May were burning up the phone lines. A few weeks later, the single was reissued with Maggie May as the A side.

Mitch never really thought that much about his chat with Rod that night. It had remained a cool memory (his words) … that is until June, 1993, when he caught an episode of the Tonight Show With Jay Leno. Jay was unclear as to what was the A side, and what was the B side, in regards to Maggie May / Reason To Believe. Mitch was flabbergasted when Rod told the story of his and Mitch's ride in the limo and said how a DJ in Cleveland turned the record over. Had Mitch not been watching TV that night, he would have never known about his small little niche in rock and roll history.

Taken from his book "Doin' The Cruise"

VERY cool story!!! (I have to pick up a copy of this book!  I’ve been meaning to for quite some time now.)

“Maggie May” (NEVER one of my favorites) is still every bit as popular today.  It just made the Top 20 on our recent Favorite Songs of 1971 Poll … and came in at #69 in our TOP 3333 MOST ESSENTIAL CLASSIC ROCK SONGS OF ALL-TIME Poll, too!  (kk)

Now I guess the "Chicago connection" comes in because Mitch has called Chicago home for decades now, broadcasting on any variety of FM stations around town since 1971, including WGLD, WXRT, WCKG, WLUP, WKQX and currently, WERV (The River), where he hosts the afternoon shift.

(Michaels was born in Cleveland in 1948.  While attending Kent State University, he began working in Cleveland radio at stations like WGAR, WNCR and WMMS.)

The Rod Stewart incident referred to above happened while Michaels was still on the air in Cleveland ... and on The Tonight Show, Stewart refers to a disc jockey "from Cleveland" who told him that he had flipped the record over to great success.  (For most of us, it was our first introduction to Rod Stewart, who The History Of Rock And Roll described as "sounding like he gargled with razor blades!")  kk

That was a great story about Maggie May that Jack related.  Maybe they will show that episode on MeTV reruns.

IF you listen to the WLS snippet I sent the other day of their year end countdown, you'll hear that where the 45 normally starts, they chopped the brief pause to make it "flow" quickly into the single.  I  hate when stations do that to a record that has a natural pause in it.  It's such a small pause in this one, but they STILL had to clip it.

So all pretty cut and dried, right?

Until we got THIS email from FH Regular Chuck Buell (who just happened to be on the air at WLS in 1971 ... and was also their music director.)

Perhaps this will give us all a Reason To Believe that not everything is always as it seems.  Read on ...

In Forgotten Hits, Thursday, August 12, 2021, Jack Levin was quoted saying “There is an indirect Chicago connection as to the song Maggie May all of sudden getting promoted.”

While that is true, the background to that fact has been misquoted for decades.

Rod Stewart once told the story about how a DJ in “Cleveland” turned his newly-released record ( "Reason to Believe" ) over to the “B” side ( “Maggie May.”)

And there’s where the story jumps “out of the groove” like a turntable’s needle rubbing the center label of a record!

“Cleveland.”  "Chicago.”  Both Midwestern USA cities that begin with a “C.”  When one is heavily touring like Rod was doing then, it’s easy for facts to become blurred or misconstrued. Add to that the fact that Stewart related his story over twenty years after Maggie May was a hit.

Levin also says that a “Chicago” DJ told Stewart at the time requests for “Maggie May” were “burning up the phone lines.” That part is also true.

During that time in 1971, I was the Music Director for WLS in Chicago. In that position, I loved listening for new artists and new hits. I am proud of my numerous Gold Record Awards for artists I either "broke" or of whose hits I was an early programmer / supporter.

My favorite occurred in the Summer of 1971. A local Chicago record promoter came into my office one day with a single from an artist who had been recording some songs as a solo artist while he was also still a member of a group. I listened to the song and thought it was okay, and told the record company representative I would consider adding it to our on-air playlist.

By then, I had long developed the habit of also listening to the flip side, the 'B' side, of any record I was considering for airplay, so I auditioned that side of this record as well.

To my ears, that other side was one of those rare songs that instantly and undoubtedly shouted "HIT!"

And because I had the empowerment to add select songs to our programming based solely on my professional opinion of their hit potential, I added this one to our on-air music rotation immediately.

When the record rep heard the "wrong side" being played on our air, he called me right away. He told me I "can't do that" because he and his company had just begun the important initial stage of promoting the other side throughout the country. I told him while I understood that, I thought the flip side was the far better song. Understandably, he implored me to play the side which they were promoting.

At this time, Ted Atkins was the Program Director of KHJ in Los Angeles, and because we had known each other for some time, I called him to ask him if he was aware of this particular record and if he was playing it. He said he was. I told him I had chosen to air the 'B' side instead. I asked him to listen to that side and let me know what he thought of it.

Within about an hour or so later, he called me back and said, "It's a Smash!" I asked him if he too was going to play it. He told me, "I've already flipped it over and it's hit the air here in L.A. already! We're playing that side now exclusively!"

Well, when a record had both WLS in Chicago and KHJ in Los Angeles, two of the most influential stations of the time, featuring this same "Hit Bound" song, it sent ripples throughout the radio community across the country and within days the record was flipped to the other side by stations everywhere (including in Cleveland.)

The originally promoted 'A' side of that record? "Reason to Believe."

50 years ago next month, on September 25th, 1971, “Maggie May” was sitting atop Billboard's Top 100 at Number One. It stayed there for five weeks. Since then, it's become a multi-million seller and basically Rod Stewart's signature song.

I loved "Maggie May" then and it's still one of my all-time favorite songs today!

And being a part of its initial success still drives me crazy when its history is so often incorrectly related. 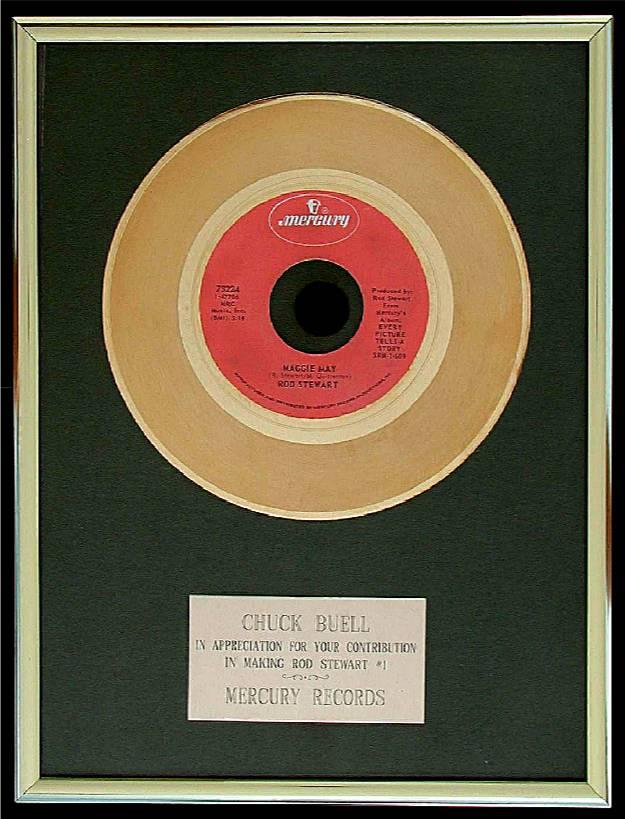 Doing a bit of fact checking of my own, I can find dozens of references that simply state "Disc Jockeys (plural, as in "in bulk," with no specific single reference) preferred the B-Side of the record and started playing that instead.)  Songfacts states that the first radio station to flip the single and play the B-Side as the A-Side was WOKY in Milwaukee.  (Hmmm ... another Midwestern city reference!)

"Reason To Believe" was the likelier choice to be the hit as it was written by an established songwriter, Tim Hardin.  "Maggie May" was written by Stewart himself and recorded for this third solo album, "Every Picture Tells A Story." While this is most definitely the song that pushed Rod's solo career over the top and made him an international superstar, he didn't have enough of a track record yet to indicate that his own composition could have (or should have) been chosen to be the A-Side ... especially since the record company told him as much.  It was also deemed to be "too long" to be a hit single ... and was probably issued as the B-Side (A) to appease the artist (and earn him a few extra royalties) and (B) because it was, at best, considered to be a "throw away" track at the time.  (In fact, it was nearly left off the album!)

ALL accounts state that the song was written biographically about the "much older" woman who took Stewart's virginity (at the age of 16) at The Beaulieu Jazz Festival.  (Her name was not Maggie May ... but Stewart liked the name, which he remembered from an old Liverpool folk song about a Lime Street prostitute.  It may have been even fresher in his mind since The Beatles had resurrected this ancient ditty for their recently released "Let It Be" album.)

Stewart has discussed the incident (which reportedly lasted considerably less time than the play length of the single!) many times over the years.  (In his words, "It was over in a few seconds.")  In his memoir "Rod: The Autobiography," he wrote: "At 16, I went to the Beaulieu Jazz Festival in the New Forest. I'd snuck in with some mates via an overflow sewage pipe. And there on a secluded patch of grass, I lost my not-remotely-prized virginity with an older (and larger) woman who'd come on to me very strongly in the beer tent. How much older, I can't tell you - but old enough to be highly disappointed by the brevity of the experience."  He apparently doesn't single out an individual disc jockey or radio station for flipping the record over in his biography ... but has acknowledged his appreciation for doing so numerous times since.

Billboard's charts indicate that "Reason To Believe" charted alone for the first four weeks ... but by the time of the record's fifth week on the chart, "Maggie May" was getting enough airplay to show up as the B-Side.  The following week, they flipped the titles, now showing "Maggie May" as the A / Hit Side ... and it stayed that way all the way to #1, where it sat for five weeks.  The success of the single also propelled Rod's album to the #1 spot on the charts.