THE ANIMALS hit #1 on The Billboard Hot 100 Pop Singles Chart with THE HOUSE OF THE RISING SUN, their first American Hit.  BECAUSE by THE DAVE CLARK FIVE, A HARD DAY'S NIGHT by THE BEATLES and HOW DO YOU DO IT by GERRY AND THE PACEMAKERS are all still holding on to Top Ten spots at #4, #8 and #9 respectively.

THE BEATLES also inch up a notch to #12 with AND I LOVE HER while WISHIN' AND HOPIN' by DUSTY SPRINGFIELD takes a major fall from #11 to #23.  THE ROLLING STONES climb to #29 with IT'S ALL OVER NOW and right behind them are THE BEATLES again with AIN'T SHE SWEET.

The lower region of the chart includes the hits FROM A WINDOW by BILLY J. KRAMER AND THE DAKOTAS (#64), MATCHBOX by THE BEATLES (new at #81) as well as its flipside, SLOW DOWN by THE BEATLES (at #99).  That still gives British Artists a 20% stranglehold on the US Charts this week. 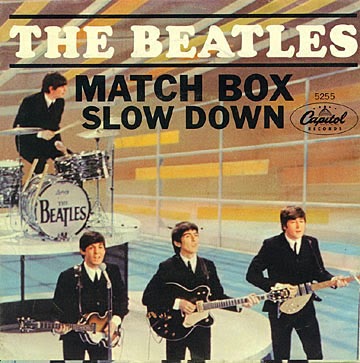 The WLS Silver Dollar Survey only has 20 spots this week as the station celebrates the Top 20 Best Selling #1 Records of the past four years since switching over to the Top 40 / Rock market. (You'll still find FOUR songs by THE BEATLES in their "recap" Top 7:  I WANT TO HOLD YOUR HAND, SHE LOVES YOU, TWIST AND SHOUT and LOVE ME DO.)

THE FAB FOUR are also represented on this week's current Top 20 chart, too … A HARD DAY'S NIGHT is #6, behind BECAUSE by THE DAVE CLARK FIVE (#2) and THE HOUSE OF THE RISING SUN by THE ANIMALS (#3).  Also making a mark this week:  WISHIN' AND HOPIN' by DUSTY SPRINGFIELD (#9), HOW DO YOU DO IT by GERRY AND THE PACEMAKERS (#11) and A SUMMER SONG by CHAD STUART AND JEREMY CLYDE (#14)
Posted by Kent Kotal at 6:00 AM