One More: Eric Burdon And The Animals

Yesterday we ran a few reviews from concerts that happened last weekend ...
And then this one came in from East Coast Forgotten Hits Correspondent Shelley Sweet-Tufano ...
A free outdoor concert with Eric Burdon! I booked off as soon as July came up on the request calendar. I had some interesting reactions from others before the concert. My DJ coworker: Are you going? I think we are planning on going. I asked D***** (person who attended Zombies concert with us) and he said, "No. Last time I saw him, he was terrible." Not much encouragement there. My son? "Do not miss seeing Eric Burdon! You gotta see him! You don't know when or where you can see these great people."

Gorgeous summer night. I arrive around 6:00 pm and sit and read till show-time (7:30 for opening act; 8:15 for Eric and the Animals) The field is already well inhabited, but as my promoter friend, Mimsie, is playing Beatles outtakes and live recordings over the sound system, I select an area straight back from the stage and in front of all well-placed speakers so I am pretty sure I will hear the stage well. I may not see anybody's face clearly but I am here to hear tonight.

As The Animals take their spots the crowd surges into applause of anticipation. They begin a loooong intro of 'Spill the Wine'. Applause explodes as Eric Burdon ambles onto the stage, bopping in time to the music. This man can't lose at this point. This is an extremely receptive, eager audience. And WOW! He hits it from the start. The verbal script of the song sounds fresh and has inflection. Let me go quickly through the set-list with comments for those who want to know what his show is bringing on this tour.

Next is 'When I Was Young' and I can't help but wonder how a sound like Eric's that fills up the outdoors can ever be contained indoors. Yes, of course, the sound system helps, but GIVE THE MAN CREDIT. Whew, he is powerful.
"Here's a song about Monterey" ... No explanations, no apologies, no talk. Just ... this is what is next.
He is open about his bands' participation and introduces them as they do solos throughout the show ...
Davey Allen on keyboards, Johnzo West on guitar, Dustin Koester on drums, Justin Andres on guitar (electric and acoustic), Ruben Salinas on saxophone and woodwind and Evan Mackey on trombone and brass.  (My apologies for any mistakes!)
It is sunset, but Eric wears dark glasses. Very bluesy, very R&B, very early jazz.
"This song is called 'Anything'. I want you to figure it out." I hear a twang added at times so that 'anything' becomes 'anythang'.  'Bo Didley Special' and Leadbelly's 'In The Times'. Aha, you are expecting Leadbelly's 'House of the Rising Sun' next ... wait for it ... because right now 'Momma Told Me Not To Come' needs to be sung with sax, trombone, drums, keyboard AND guitars.

David Bowie? Pronounced "David BOWie" by Eric gets a deep, gritty 'Space Odyssey' presentation where, I can honestly say, is the only time I hear him slightly off-tune as he started the first chorus. He is very active on stage, as are his band. I saw some youtubes of this concert and he was jumping around more than I realized. If you watch the youtubes, you will be disappointed with the sound. It was so much better than represented there.

Let's speed this up!
'Hit Me With Your Stick' (ended up as my DJ friend's favorite), a slightly new arrangement of 'Please, Don't Let Me Be Misunderstood', 'Don't Bring Me Down' (I have video of this one from the Ed Sullivan Show), and 'House of the Rising Sun' with solo acoustic guitar for first verse ends the show. NO! COME ON PEOPLE! You know and I know it does not end here. Unfortunately, the man behind me screaming "MORE" in our ears, over and over does not. When Eric and the Band return, he feels obligated to point out, "That did it!" OK then, sir, thank you.

They had already received a standing ovation, which on a large hilly field must feel terrific when they continued their encore with 'We Gotta Get Out of This Place', 'It's My Life' and 'Hold On! I'm Coming'. On that last song, the band totally lets go and dances around, hair flying, without missing a note on guitar or keyboard. Whew! Another standing ovation ... a steamy July night ... the stars emerging in the sky to compliment the stage ... and a drive home that was filled with contentment and the knowledge that this after-concert high is why I keep going.

An after concert reaction from my DJ friend?
"I am shocked at just how good he was." 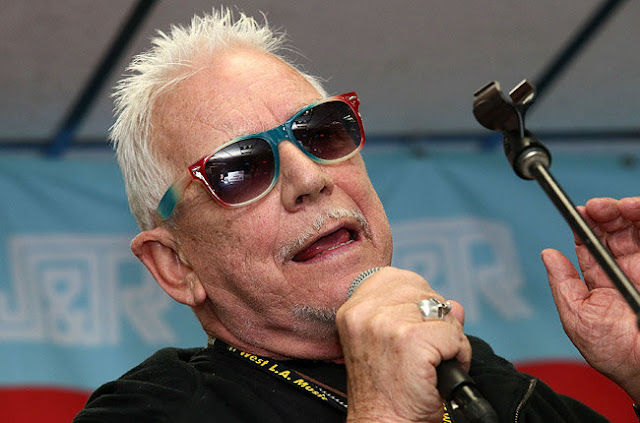 I've never had the pleasure of seeing Eric Burdon live in concert ... but I hear it's one hell of a show.
He has performed here several times over the past few years and his concerts typically sell out.  (A spot he seems especially partial to is The City Winery, where he is booked again September 26th and September 28th.  Tickets are still available for both shows through The City Winery online box office:  http://www.citywinery.com/chicago/tickets/eric-burdon-the-animals-9-26.html