Well, here's a chance to relive those days.
'80's Rockers Survivor, John Waite and A Flock Of Seagulls will all be performing together on the same stage this Saturday Night (October 29th) and, thanks to our friends at The Genesee Theatre, we've got a very special ticket offer to pass along exclusively to our Forgotten Hits Readers.


This promises not only to be a great night of music ... but also loads of fun ... as, in addition to the concert, they'll also be hosting an '80's "costume contest" ... it IS, after all, the weekend before Halloween ... where you can win some great cash prizes.
Hey, if you rocked the '80's, you've probably still got some of this stuff!  (In fact, I happen to know a few of you who are STILL dressing that way today) ... so why not whip out a few of those treasures from the back of the closet ... and maybe even win some money in the process!!!
All ticket prices (seats range from $39.95 to $69.95 each) will be discounted to HALF PRICE EXCLUSIVELY for Forgotten Hits Readers ... so come on out, have some fun, win some prizes and enjoy a great show!  (Because this is effectively a "Buy One, Get One Free" offer, tickets MUST be purchased in pairs ... and a Ticketmaster Service Charge will be added to all purchases.)
More details below ... 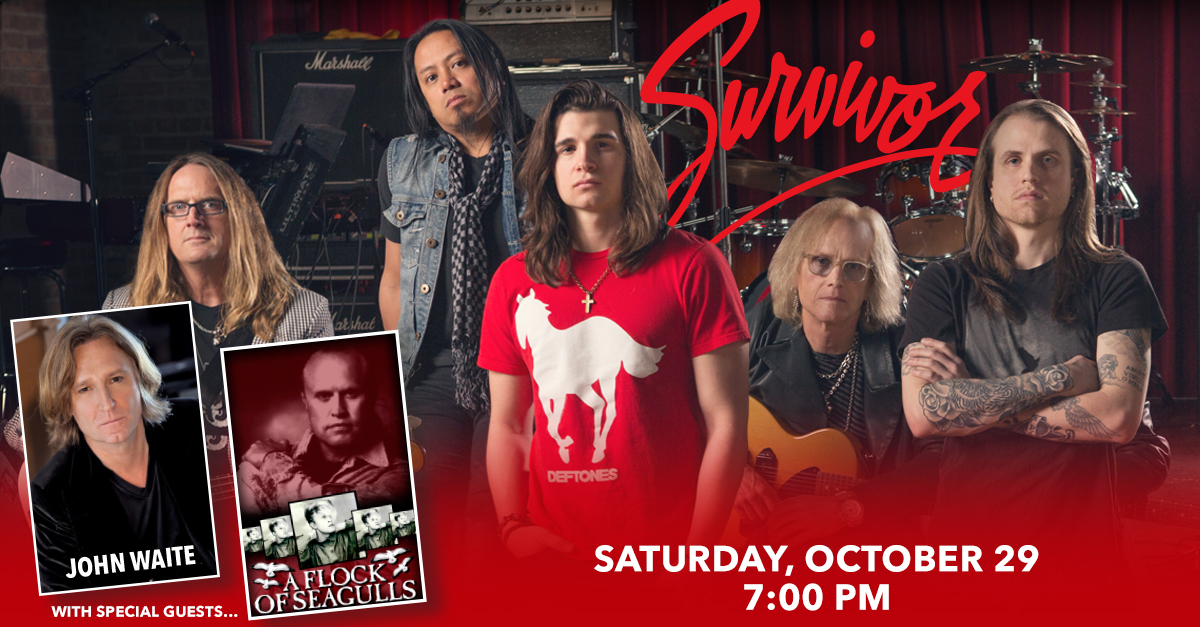 Legendary rock band, Survivor, made famous by their Rocky III hit “Eye of the Tiger” is embarking on their next chapter with a new lead vocalist and a new attitude. Joined by John Waite and A Flock of Seagulls, prepare yourself for a night of rock and roll you’ll never forget!
Survivor's big break came in 1982 when the band was asked by Sylvester Stallone to provide the theme song for Rocky III.  That single, "Eye Of The Tiger", hit #1 and stayed there for six weeks, winning a Grammy for Best Rock Performance by a Duo or Group with Vocal, a People's Choice Award, and both Academy Award and Golden Globe nominations.
But the hits didn't stop with "Eye Of The Tiger" ... Survivor scored seven other Top 40 Hits between 1981 and 1987 with songs like "I Can't Hold Back", "High On You", "The Search Is Over", "Is This Love" and "Burning Heart", which was featured in Rocky IV.
British Rocker John Waite first rocketed to success as the bassist and lead vocalist of The Babys, who had the Top 20 Hits "Isn't It Time" and "Every Time I Think Of You" ... and then he went on to top the charts on his own with his 1984's #1 Hit "Missing You", followed by other Top 40 Records like "Tears" and "Every Step Of The Way".
And A Flock Of Seagulls may be best remembered for their Top Ten Hit "I Ran (So Far Away)" ... or would it be those bizarrely teased haircuts (?) ... but they, too, hit Billboard's Top 40 Pop Singles Chart a couple more times with "Space Age Love Song" and "Wishing (If I Had A Photograph Of You)".  It was sleek dance-pop music all the way.
Looking to make your Halloween weekend totally choice? Come relive the most excellent '80s on Saturday, October 29th, as The Genesee Theatre presents three musical acts that helped define the decade:  SURVIVOR, JOHN WAITE and A FLOCK OF SEAGULLS
And, to make the evening even more righteous, you can win prizes by entering our 80s Costume Contest!

We're looking for the most glam, preppy or bodacious Dude, Dudette and Couple who best capture the look of that decadent decade. Opportunities to be anything from a dexter or a rocker are endless:

Judging takes place between 5:00 and 6:30 PM at the north end of the Jack Benny lounge inside The Genesee on the day of the concert. At 7:00 PM, the top three finalists in each category will be brought on stage, where the winners will be announced.

Rules:  Contest is open only to patrons with a valid ticket for that night's show. Contestants must be 18 years or older.

Don't be a dweeb! and hang out at the mall food court for another Saturday night.

Join us as we take this party to the max – fer sure, fer sure!

Here's a link to buy tickets ... and here's the way it works.
When you get to the site, click on the "SPECIAL OFFERS" tab and enter the code FHITS ... this will automatically cut all of the ticket prices in half!!!
Select the seats you want and then complete your offer.  (Remember, tickets MUST be purchased in pairs in order to qualify for this very special pricing.)
http://www1.ticketmaster.com/event/070050D0D2C559FF?brand=genesee&camefrom=CFC_GENESEE&fg=sim&f_display_landing_
popup=false&f_resale_print_on_offercard=true&f_header_with_image=true&f_
sessioncam=1&ab=m_efeat3707v3desktop
And there are lots MORE great shows coming to The Genesee Theatre in the weeks to come ...
Talk about The '80's!!!  CULTURE CLUB appears at The Genesee on Thursday, November 3rd!
(Keep watching this page as we are hoping to have a special Culture Club Ticket Offer for you, too ... so stay tuned!  We could have an announcement as early as tonight!)
The Monkees 50th Anniversary Tour (starring Micky Dolenz and Peter Tork) stops by the following night, Friday, November 4th ...
On November 9th, it's The Goo Goo Dolls ...
Then be sure to check out Styx on November 10th, more '80's rock with The B-52's on November 11th, and the legendary Peter Cetera, former lead singer of Chicago, on November 12th.
Chris Isaak does a holiday show on November 18th, as does Ronnie Spector on December 1st and LeAnn Rimes on December 2nd.
Morris Day and the Time appear on December 29th ... and then next year the '80's hits just keep on coming with a special double bill of Air Supply and The Romantics on January 21st.
I know you'll want to check out some of these ... tickets for ALL of these great shows can be purchased thru their online box office here:   http://www.geneseetheatre.com/events