The Hollies have TWO new records on the chart this week … that's because they've switched record labels … so Epic Records, their new label, is pushing "King Midas In Reverse", which premiers at #67 and Imperial Records, their OLD record label, is still trying  to make money off their catalog by releasing a remake of the old Doris Troy hit "Just One Look", which debuts at #80.  It's working … those are the top two debuts on the chart this week!

The Beatles complete “Blue Jay Way”, a song that will appear in their new television special “Magical Mystery Tour”.

The Doors headline a concert at the Cal State Gymnasium in Los Angeles.  The Nitty Gritty Dirt Band and The Sunshine Company are their opening acts.

Meanwhile that same night Big Brother and the Holding Company (featuring Janis Joplin on lead vocals) played The Ark in Sausalio, California, with Jack and the Rippers as their opening act.  (Apparently no relation to Jesse and the Rippers featuring John Stamos some 20 years later.)

Also in California, (or more specifically, The City By The Bay, San Francisco), a funeral was held for what many consider to be the Final Day of The Summer Of Love.

October 6th marked exactly one year after California lawmakers banned the drug LSD - and several hundred "counter-culture" Young Americans gathered at Haight / Ashbury to hold a funeral advertised as "The Death Of The Hippie".

In an article titled "Love and Haight", The Saturday Evening Post described it this way:  "Surviving film footage depicts a surprisingly carnival-like atmosphere.  There was dancing in the streets.  Someone played 'Taps'.  Sullen pallbearers carried aloft a large coffin that bore a single inscription: 'Hippie, Son of Media'.  And that, ladies and gentlemen, is how - officially and weirdly - the so-called Summer Of Love concluded.  Groovy."

Meanwhile, here in Chicago, these are the tunes that we were diggin' on the radio, this week in 1967 ... 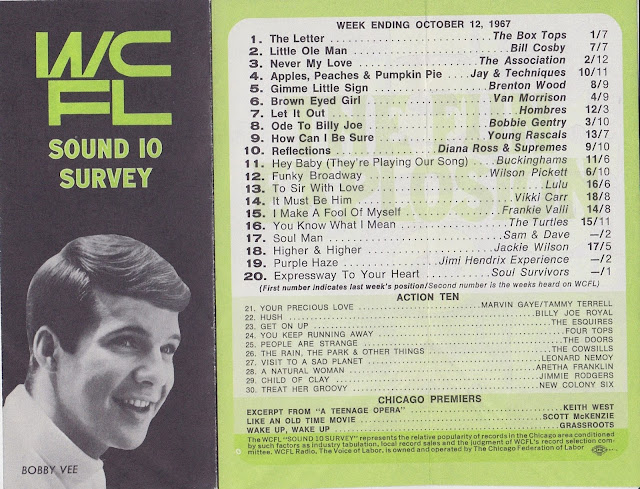