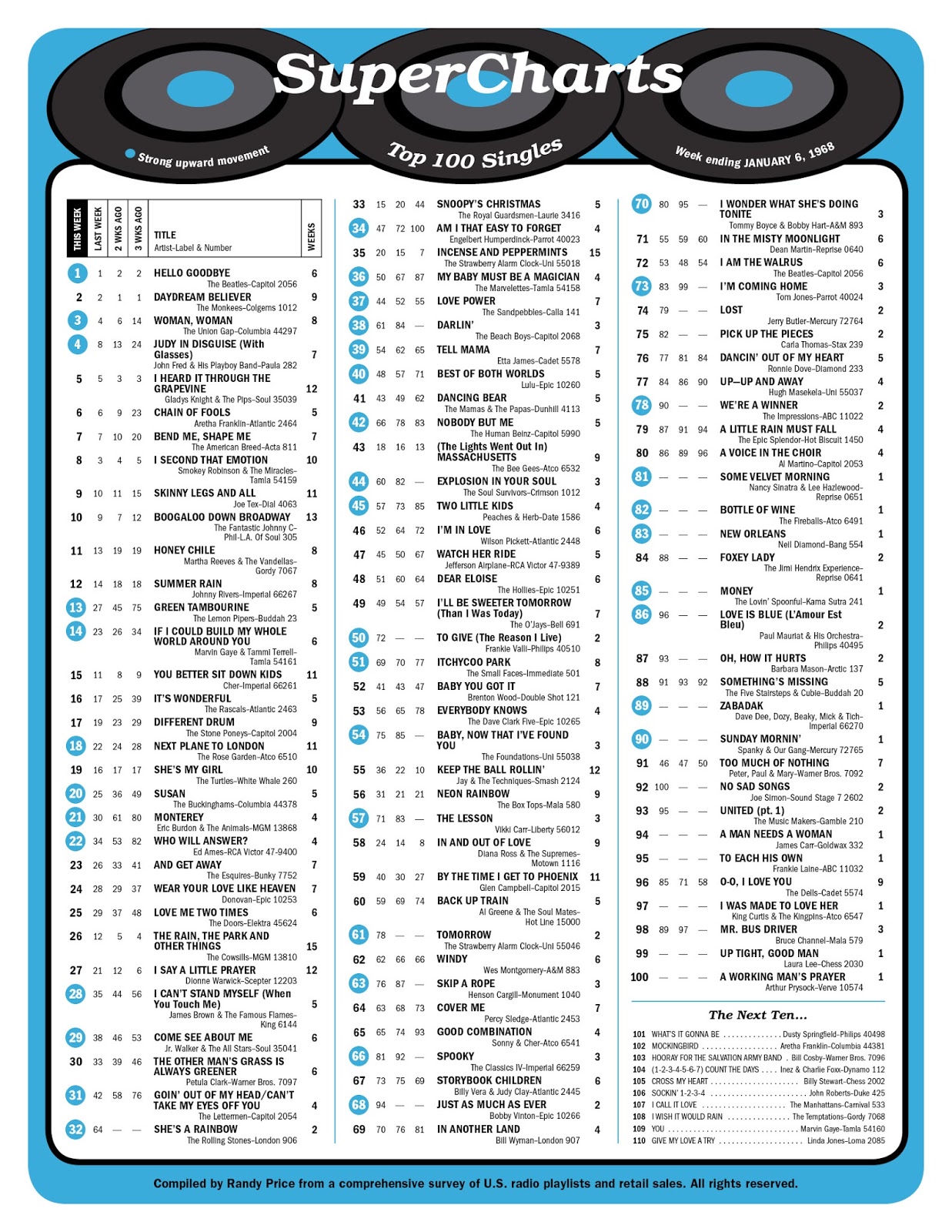 The first chart of 1968 shows The Beatles holding on to their #1 spot with "Hello Goodbye".  They also have the brand new #1 Album in the Country as "Magical Mystery Tour" moves into the top spot.  Side One features music from the film / television special that aired on Boxing Day in the UK, where this was only released at the time as a special hard-cover EP (extended play recording) featuring just the soundtrack songs along with a colorful booklet featuring photos from the film.

Here in America, Capitol went with a full blown LP, filling side two with all of their non-album singles from 1967, A-Sides and B-Sides, like "Hello Goodbye", "All You Need Is Love", "Penny Lane" and their counterparts "Baby You're A Rich Man" and "Strawberry Fields Forever."  (The B-Side to "Hello Goodbye", "I Am The Walrus" WAS featured in the film so therefore made the cut on the British EP).

While the project was pretty much overall deemed a disaster … and a critical failure at The Beatles' level, the soundtrack album occupied the #1 Spot on the Album Chart for eight straight weeks … and gave us some timeless gems like the title track, "The Fool On The Hill", "Your Mother Should Know", the instrumental "Flying" (which got played regularly on the radio around the country as stations went into their news breaks) and "I Am The Walrus."

#2 on the Pop Singles Chart is "Daydream Believer" by The Monkees for the second week in a row.  Of the nine weeks this song has spent on the chart thus far, SIX of those weeks have been spent in either the #1 or #2 position.

"Woman Woman" by The Union Gap moves up a notch from #4 to #3 as does "Judy In Disguise" by John Fred and his Playboy Band (#5 to #4).  Positions #5, #6 and #7 are all hold-overs from last week's chart:  "I Heard It Through The Grapevine" by Gladys Knight and the Pips, "Chain Of Fools" by Aretha Franklin and "Bend Me, Shape Me" by The American Breed.  In fact there are NO new entries into The Top Ten this week.

We hope you have enjoyed our look back at 1967 in this VERY special year-long tribute.  It was a LOT of work but truly worth every minute of it if it helped to rekindle a memory or two … or 500!!!