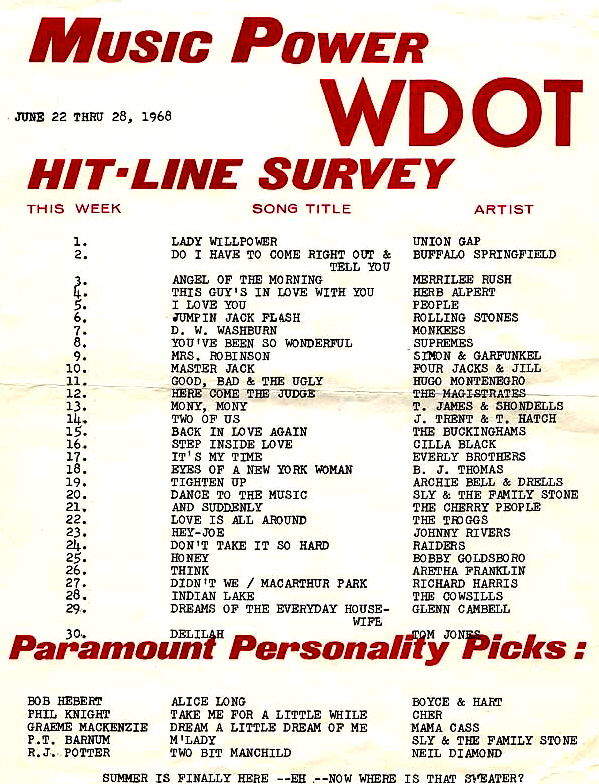 LA's Buffalo Springfield is about as far from this station as a band can get in the US.  Burlington is located along Lake Champlain half an hour from the Canadian border!  Yet, the band's "Do I Have to Come Right Out & Tell You" ranks #2 this week!  Stranger yet is that the song was only on 45 as the original B side of the 1966 hit "For What It's Worth!"  A home grown "TSW" (Two-sided winner!)!

There's plenty of other cool oddities here too like the Supremes' "B" side of "Some Things You Never Get Used to" at #8 and the LP cut off Johnny Rivers' classic "Realization" album, his rendition of "Hey Joe."  Another we will feature is the then husband and wife duet of our own FH star, Tony Hatch, and Jackie Trent, "The Two of Us."
-- Clark Besch


The Buffalo Springfield track (always one of my favorites ... and a track that did well on our Favorite, Forgotten B-Sides Poll several years ago) is a real surprise to see on this chart.

Actually titled "Do I Have To Come Right Out And Say It," the track was written by Neil Young (but that sure doesn't sound like Ol' Neil singin' it!!!)

I'm going to go with two of my favorite dee-jay picks this week ...

"Alice Long" by Tommy Boyce and Bobby Hart (this one should have been HUGE!) and the Mama Cass reading of "Dream A Little Dream Of Me," a song I will NEVER get tired of hearing!  (kk)

6/22/68 – The Jeff Beck Group (featuring Rod Stewart on lead vocals) play their first US Concert at The Fillmore East in New York City.

6/23/68 – Elvis Presley records “If I Can Dream,” the song that will close his NBC Singer Television Special when it airs in December.