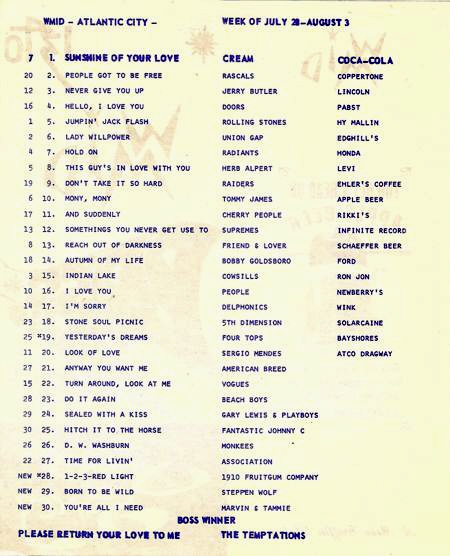 
Wow!  Check it out ... Cream's got the #1 Record on this week's WMID Survey out of Atlantic City, New Jersey!

But there are other poised to take its spot ... The Rascals are up 18 places (from #20 to #2) with "People Got To Be Free," Jerry Butler jumps nine spots (from #12 to #3) with "Never Give You Up" and The Doors are nipping at their heels with their latest, "Hello, I Love You," which climbs from #16 to #4.  Any one of these records could take over the top spot next week.  (And "Sunshine Of Your Love" made a huge leap of its own, reaching #1 from the #7 spot the week before!

The chart seems to skew to the heavy side with records by The Rolling Stones, Steppenwolf and People all represented ... but again, this was the magic of the '60's ... which means that you'll also find records by 1910 Fruitgum Company, The Vogues, The Monkees, Sergio Mendes and Brasil '66, The Association, The Cowsills and The Supremes in this week's Top 30.

One surprise ... The American Breed charting again with "Any Way That You Want Me," again, a record that failed to chart here at home, climbs from #27 to #21 out on the east coast.  (kk)

Altho there aren't any songs by the Jersey Boys on this chart, there's plenty of Windy City guys representing here!  A great American Breed tune as well as Jerry Butler's song that would bring him and his "Ice Man" image to true acceptance on both the RNB AND Pop charts in the coming years.

We'll feature Chicago and Chess Records' Radiants' last hit, 'Hold On" (#7) this week.  The band had been around quite awhile and from a local slant, members Maurice McAlister and Green "Mac" McLauren (recorded as "Maurice & Mac") were the artists who recorded WLS' Art Roberts mid-60's late night theme "Hey Baby, They're Playing Our Song."  We'll feature that, as well as the Radiants' song as well as one of my fave 60's bands, the Montanas', pop version of "Hold On" produced by our Tony Hatch!
-- Clark Besch

7/23/68 – Apple Records signs The Iveys to the label.  They will have one minor hit (“Maybe Tomorrow,” #67 in Billboard but a Top 40 Hit … #32 … in Record World) before changing their name to Badfinger.  (The name was suggested by John Lennon, who also had once worked up a bluesy instrumental he called “Badfinger Boogie” … Paul McCartney, on the other hand, wanted to call the group “Home” … which gives you some idea how far apart their ideas were heading at the time!)

Also on this date, Jeannie C. Riley records her future #1 Hit “Harper Valley PTA.”  (That’s one of those songs I don’t ever need to hear again!)

7/27/68 – Robin Gibb is hospitalized for exhaustion during The Bee Gees’ first US tour.
Posted by Kent Kotal at 6:00 AM