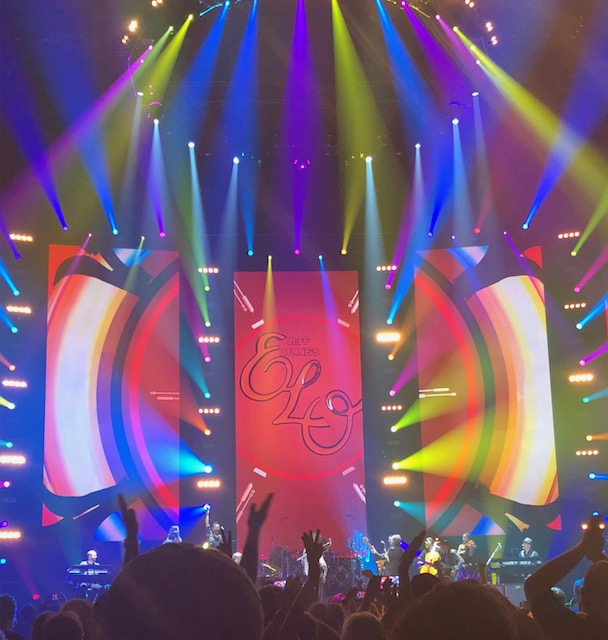 It was, without question, the most highly anticipated show of our lives.

For over two years, we have been monitoring the web faithfully waiting for the announcement of Jeff Lynne’s ELO American tour dates.

When the word finally came, we bought our tickets IMMEDIATELY … nearly nine months in advance … for his appearance at The AllState Arena in Rosemont, IL, on Wednesday, August 15th, 2018.

It had been, after all, 35 years since Jeff Lynne last toured The States.

We further whetted our appetites during the wait by watching his live concert events filmed at Hyde Park London and Wembley Stadium.  The sound and visuals were incredible ... as such, we came into this concert event with extremely high expectations.

I am happy to report that the show exceeded anything and everything that we may have imagined.

It was a brilliant display of sight and sound … music performed to impeccable perfection by some of the best musicians we have ever witnessed on stage ... and a video, light and laser show that was beyond compare to anything else we’d ever seen in all our years of concert-going experience … an absolute spectacle to take in … and the perfect marriage of “visual music.” 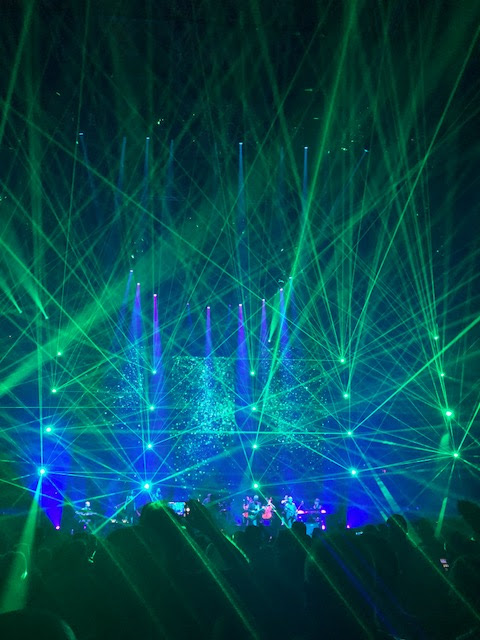 Of course, it didn’t hurt that Lynne was accompanied by twelve other stellar musicians and vocalists, who were collectively able to create a virtual symphony of sound, thus doing the name of the band on stage proud in the process ... let's not forget that this was The Electric Light Orchestra. 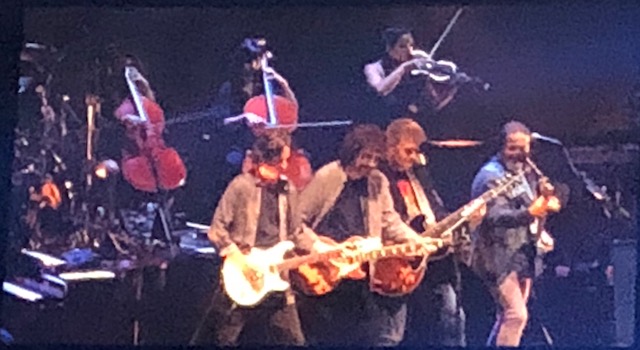 Lynne himself states in the concert program that he had thought that he had “already packed it in 30 years ago to be a record producer” ... but now was back out on the road presenting the incredible catalog of music he created some 40 years ago.

(Interestingly enough, the “warm up” music played before ELO took the stage was all music that Lynne had produced for other artists, including tracks by George Harrison, Tom Petty and Roy Orbison … as well as “Free As A Bird” from the first Beatles Anthology album.)

“I love this ELO band and really enjoy our gigs together.  It’s the best time I’ve ever had in music!” – Jeff Lynne 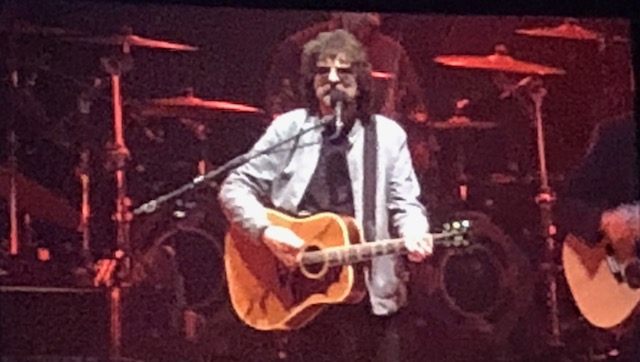 Our experience was also enhanced by having absolutely PERFECT seats … Main Floor … 19th Row … DEAD CENTER … with a clear view of the stage throughout the show (if you didn’t mind standing, of course … which we did for nearly every single song.)  [Ya dunn good, Frannie!  These were GREAT seats!]

After a quick stop in Toronto, Canada, on Saturday, August 18th, he’s only got three stops left on the American leg of the tour (Madison Square Garden in New York for two shows on August 21st and 22nd and The Wells Fargo Center in Philadelphia, PA, on August 24th.)  Then it’s off to Europe, with shows running through the end of October.

The set list has been plastered all over the internet … and he doesn’t seem to be varying from it from city to city … and why should he? …

Song after song after song, he had the entire crowd up on their feet for nearly a two hour show.  (The only song of note that we missed, per Frannie, was "Strange Magic," a personal favorite that was missing from the playlist.)

No cell phone photography or video could possibly do this show justice … it was a spectacle that had to be seen first hand in order to be fully appreciated.  Precision-timed, perfectly synchronized sight and sound from start to finish.  We loved it.

[That being said, you'll still find some of the better shots that Frannie was able to snag from the 19th row posted to the site today.] 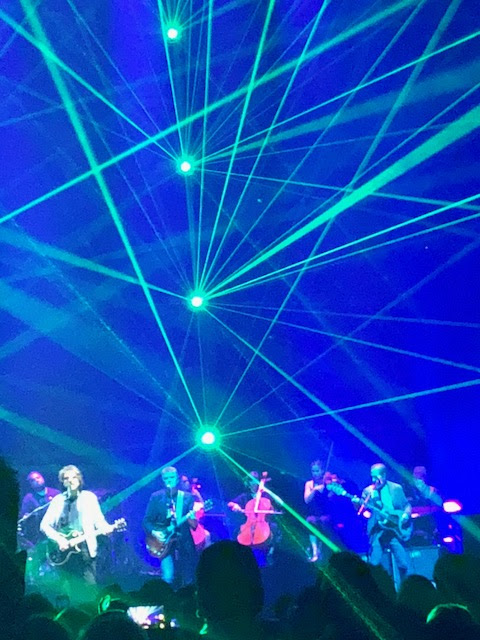 Best Show of the Year?  Probably …

I don’t really see anything coming up on our list that could possibly top this (although Ron Onesti has “Woody” Wood of The Bay City Rollers coming to The Arcada Theatre in September, so who knows!!!) …

But really, how could it possibly be anything less than the Best Show Of The Year …

When it’s also one of the best shows we’ve ever seen in our entire lives?!?!  (kk) 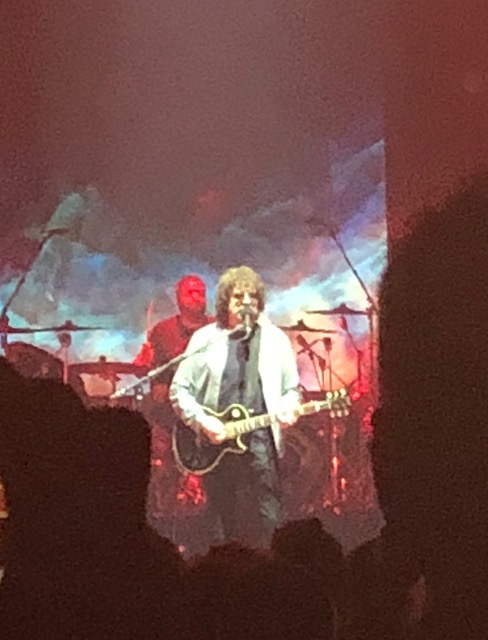 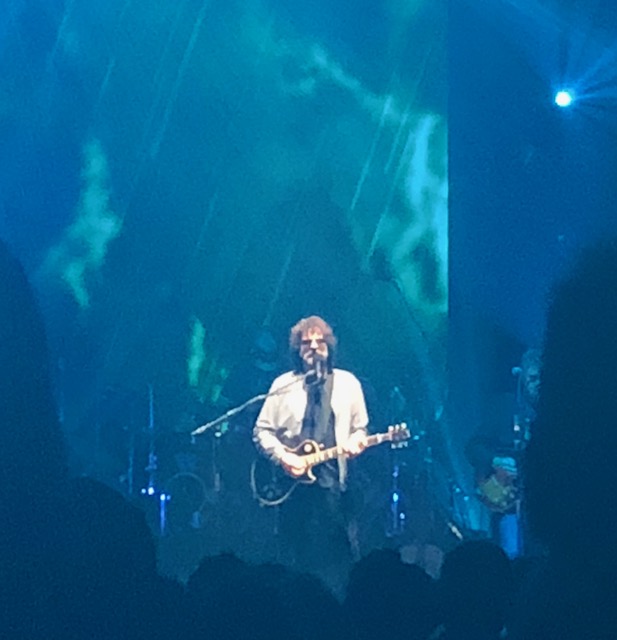 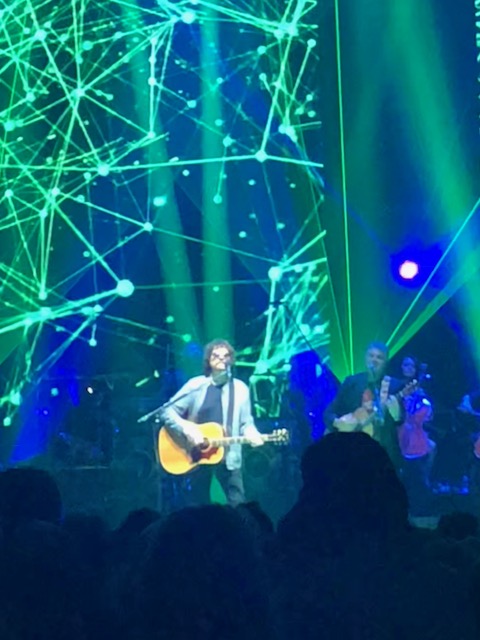 SET LIST
(* = my personal favorites as performed that night):

Standin’ In The Rain
Evil Woman
*All Over The World
*Showdown
Do Ya
When I Was A Boy
Livin’ Thing
*Handle With Care
Rockaria!
*Can’t Get It Out Of My Head
10538 Overture
Shine A Little Love
Wild West Hero
*Telephone Line
*Sweet Talkin’ Woman
*Don’t Bring Me Down
Turn To Stone
*Mr. Blue Sky
ENCORE:
*Roll Over Beethoven 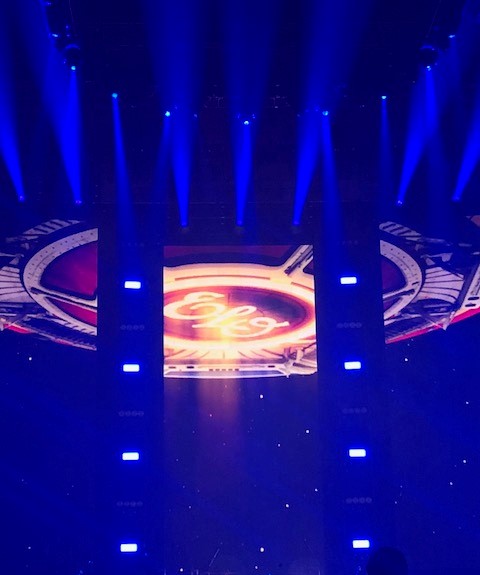 How much did we enjoy the show?

Instead of going to the 50th Anniversary Theatrical Release Celebration of Elvis Presley’s 1968 Singer Comeback Television Special as planned, we opted instead to order a pizza and watch Jeff Lynne’s Wembley Stadium Concert again on Showtime!  (kk)

A tip of the hat to the opening act, Dawes, who had the very difficult task of trying to get a crowd of 20,000+ people pumped and primed to see ELO to listen to their one hour set of completely unfamiliar music with at least half an ear.  Actually, they were pretty damn good ... and will be returning to the Chicagoland area for another show in January.  Kudos for hangin' in there and giving it your best shot during what had to feel like the chance of a lifetime ... you won a few of us over in the process.  (kk)
https://dawestheband.com/
Posted by Kent Kotal at 7:00 AM