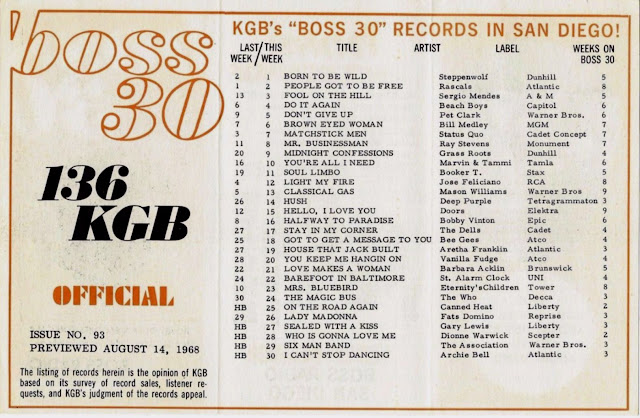 Moving from KQV last week to KGB this week, we get the switch to a west coast hit parade.  Two of the sounds that had a connecting story were Eternity's Children's "Mrs. Bluebird" and Millennium's "5 A.M."  Despite hailing from Mississippi originally, Eternity's Children's song was very flower power sounding and their vocalist / leader, Bruce Blackman's voice might sound familiar as the vocalist / leader of Starbuck, who had the huge 70's hit "Moonlight Feels Right."

The Millennium were a studio group created by producer Curt Boettcher (ala Sagittarius) and both "5 A.M." and "Mrs. Bluebird" were produced by him in '68!  Eternity's Children toured with the Strawberry Alarm Clock, who have a beautiful song at #22, "Barefoot in Baltimore."  Despite the psychedelic reputation and group name, the SONG reached Billboard's Easy Listening chart!
--  Clark Besch


When The Beatles recorded "Lady Madonna," Paul McCartney said he used his "best Fats Domino voice" for the lead vocal.

So it's REALLY cool to see The Fat Man sitting at #26 this week with his version of this Beatles Classic.