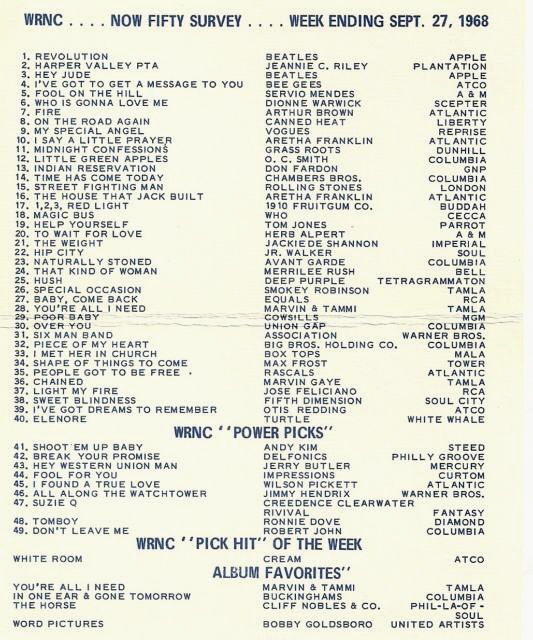 Raleigh is the state capital of North Carolina and the second largest city in the state.  Unlike last week's top 30 WJAK chart, THIS week's chart features the old (nearly) top 50 and thus, boasts some great obscure tracks.

First, we finally find the Beatles' two-sided hit positioned separately at #1 and 3.  Billboard was still doing it this way (ending in late 1969), but you seldom saw separation on station charts.  I never could tell why and how this was done, but I even did it on my own personal charts.  Aretha's current two-sider was at 10 and 16, too!

At the bottom end of the top 49, Robert John uses big production sound in covering a song written by the still basically unknown, Nilsson, titled "Don't Leave Me."  The Buckinghams have a "fave album," too!  The album featured a song "What is Love" that they performed on the Ed Sullivan show in January, 68, but that episode had just repeated on September 1.  Here's that tune, which had originally been planned as an A side 45.
-- Clark Besch


I'm starting to see a trend here with "Revolution" seeming to be the favored side on the last several charts we've run.  (Here it sits at #1 while "Hey Jude" holds down the #3 spot.  Likewise, it seems to be the Jackie DeShannon version of "The Weight" that is getting the AM radio airplay rather than The Band's original version that we featured a couple of weeks ago in our Saturday Survey feature.

Speaking of which, here in Raleigh, "Shoot 'em Up, Baby" is shown as an upcoming Power Pick while a couple of weeks ago we saw it was already a #2 record elsewhere in the country ... proof again as to why certain records, no matter how big they really were, never got their "due" on the national charts because the momentum of these hits were spread too far, too wide and too thin.  (Nationally, "Shoot 'em Up, Baby" got to #31.)   kk

Also on this date, The Jackson Five open a concert in their home city of Gary, Indiana, that also includes Motown legends Gladys Knight and Stevie Wonder

9/28/68 – Legendary Memphis DJ Dewey Phillips dies … Dewey was the first disc jockey to ever play an Elvis Presley record on the radio.  They remained friends until his death.

9/29/68 - Ed Sullivan kicks off his 21st season with musical guests Jefferson Airplane (“Crown Of Creation,” “Won’t You Try” and “Saturday Afternoon”) and Diana Ross and the Supremes (“Love Child” and a medley from “Funny Girl”).  [I guess the other Supremes had to learn this song pretty quickly, as Diana had just recorded it the week before without them!!!]