First, the Freddie Mercury / Queen biopic “Bohemian Rhapsody” that we saw on Sunday afternoon and then the Peter and Jeremy concert at The City Winery we attended Tuesday Night.  (This week we’ll be seeing The Orchestra, featuring former members of ELO, and Gladys Knight at The Arcada Theatre … so watch for review of THOSE shows next week, too!)

Meanwhile, here’s a bit more on the ones that we just covered.

A massive amount of Queen music continued throughout the week (much as I had expected it would) … and it looks like Queen videos have been quite the rage on YouTube, too.

We found an excellent quality video of their complete Live Aid performance that we wanted to share with you today … so the next time you’ve got an extra 25 minutes, give this one a look.

The whole band looks and sounds great (although while watching this clip I couldn’t help but feel that Rami Malek’s fake teeth were a bit over-exaggerated in the film.)  Still, he did a REMARKABLE job of mimicking Freddie’s moves and mannerisms despite what just HAD to be some VERY uncomfortable handicaps.

And response has been good to the Peter and Jeremy review we ran yesterday as well.  Here are some of YOUR thoughts on the duo ...

Peter and Jeremy:
>>>SIDE NOTE TO RICK O'DELL:  If Me-TV-FM isn't already playing “Willow Weep For Me,” it'd be a great add for you!  (kk)
Good morning, Kent:
Oh yes, we play Chad & Jeremy’s first three hits:  Yesterday’s Gone, A Summer Song and Willow Weep for Me.
I’m going to look into a few more.
Rick
Might I suggest (and recommend) "I Don't Wanna Lose You Baby" ... not as well known, perhaps, but a Top 40 Hit nevertheless ... and, it's a GREAT sounding record.
"If I Loved You" is another good one, much in the "Willow Weep For Me" vein ... and I have to admit that while it's not one of my favorites, Jeremy did an INCREDIBLE job on "Distant Shores."  (kk)
Those were all moderate hits in Chicago and worth a second listen.  I’ll give ‘em a spin.
Thanks, Kent.
Rick


Hopefully we'll be hearing more Chad and Jeremy music on Me-TV-FM in the days to come ... it's our "Go To" station (when we're actually in a car that allows us to listen, of course!!!)
Peter and Gordon music that STILL sounds incredibly fresh includes their hits "A World Without Love," "I Go To Pieces," "True Love Ways," "Woman" and "Lady Godiva" ... and I think they're already playing most, if not all of these.  (An occasional spin of "Nobody I Know" and "I Don't Want To See You Again" would make for a nice surprise, too ... as would "Knight In Rusty Armour," a #12 Hit for the duo in 1967.
Good stuff!  (kk)

I’ve seen Peter and Jeremy twice now and I just LOVE the stories they have to tell.  I think it's a key part of what they do and find it uniquely different than shows by most oldies artists who come out, rush thru a few hits and then are gone before you know it.  I thoroughly enjoyed both performances.
Rich
I totally agree … both are EXCELLENT story tellers and very charming and entertaining … but they need to break things up a bit more with some musical interludes.  We've seen a number of theses "Songs And Stories" shows now and they're very entertaining ... but a big part of what makes that work is setting a pace that engages the audience and takes them along for the whole experience.  Clearly, there is an art to weaving the stories around the music while still fitting in more of what people came to hear … especially when they both still sound as great as they do!  (The Jim Peterik career retrospective show we saw recently immediately comes to mind!)  Peter and Jeremy tell some very entertaining stories and share some fascinating memories ... but I felt like half of those could have been covered in half the time and still have been every bit as entertaining.  (kk)

Kent,
I caught the Peter and Jeremy show at the Katharine Hepburn Cultural Arts Center (aka "the Kate") in Old Saybrook, Connecticut this summer.  Sounds like pretty much the same show you saw at the City Winery -- and as far as I'm concerned, I could have written the review you did.  Their stories, videos, etc., were often amusing and usually engaging -- hearing Paul McCartney's partial demo of "A World Without Love" was a treat -- but lordy, too much!  SING, already!   In addition to "Lady Godiva," I would have liked to have heard the similar "Knight in Rusty Armour," and especially my favorite P&G song, the obscure "To Show I Love You."  (Buddy Holly songs ... not so much.)  It would have been good to hear C&J's "What Do You Want from Me" as well.  But no ... they sang "All Shook Up." Like ...... what?  It's not as if the Peter and Jeremy catalogues are so thin that they needed to bring in some "extra" filler material.
Henry McNulty
Old Saybrook, Connecticut

Kent,
It might be tiring for someone who worked all day to hear two old Brits gushing about their early rock days, but I would welcome all the chatter I could get if I could see or meet these legends.  I have never been quite as big on the live performances as I have been on stories, as I have the songs and can sing along with them in my car -- BUT I cannot know the info they could expound on these legendary tunes.  Don't get me wrong, I would LOVE to hear even a fraction of all the artists from my 60's life that you guys in Chicago get.  We get basically ZERO here in Lincoln and at that, prices for concerts these days are basically outrageous.
In the case of Peter & Gordon and Chad & Jeremy, both duos have been VERY outgoing to audiences since day one, so it comes as no surprise that they wanted to tell long stories.  A review of Chad & Jeremy's visit to Lincoln in 1964 revealed how outgoing they were here when they were big stars.  A good friend interviewed both decades ago and they answered TONS of questions including their stay at WLS Ron Riley's house when in Chicago in the mid 60's when they played there.  I was a member of the P&G fan club decades ago when Gordon was mostly running it and we got some nice exclusives then and insight into their careers.
I'm guessing they did not sing a few songs due to Gordon's deep lead vocal voice missing, such as the "True Love Ways" opening.  I am a bit confused to read they did three songs and then it sounds like they did more in the opening set?  Whatever the case be, they DID quite a few hits and maybe the story telling was meant to get their voices in gear for singing?  Who knows.  I say TALK all you want if you are going to also sing most of the hits!  I would have liked to have them show the duo's rocking videos such as their Hullabaloo performance of their (P&G) original song, "Wrong From the Start" (which, by coincidence, I have taped off Ron Riley's show) or Chad & Jeremy's rocking video of Ray Charles' "Sticks & Stones."  They COULD rock if they wanted.
https://www.youtube.com/watch?v=24ydABAF1Ic
https://www.youtube.com/watch?v=GZMbG4uuMKM
Clark Besch
Other than their bluesy, slowed-down take on “All Shook Up,” the only other similar-sounding tune they did was “No Other Baby,” a late '50's tune that was covered decades later by none other than Paul McCartney on his “Run Devil Run” CD.
Jeremy explained that it was the marketing strategy of their record label to keep them in the non-rock category, especially after “Willow Weep For Me” (a song written in 1932!) became a hit for them.  Others of the ilk followed, such as “September In The Rain” and “If I Loved You.”  Part of the marketing strategy was to make them stand out from all the other pop groups that America was discovering during this saturation of British music first hitting our shores.  And who knows ... perhaps this was a big reason why they crossed over in such a big way with the parents as well as the kids.  (My Mom was a MAJOR Chad and Jeremy fan … Herman’s Hermits, too, who took a similar approach by resurrecting some old “Music Hall” songs for their repertoire.)
An interesting story that could have been included would have been the fact that Chad and Jeremy also recorded a Lennon and McCartney tune, “From A Window,” which proved to be a much bigger hit for Billy J. Kramer and the Dakotas.  (Peter and Gordon and Billy J. had the inside track when it came to recording Lennon and McCartney "throw-aways," many of which proved to be EXCELLENT songs in their own right.)
Jeremy also showed us how, when he and Chad decided to jump ship to a bigger label (Columbia), their old record company (World Artists) released a compilation album that featured (I kid you not!) a photograph of Peter and Gordon on the back cover by mistake (or was it?!?!), showing again just how interchangeable these two duos really were at the time.  (As I saw it, Chad and Jeremy crossed over as more “family fare” and, as such, ended up on the hit television series “The Dick Van Dyke Show,” “The Patty Duke Show” and the INCREDIBLY popular cult-classic, “Batman,” while Peter and Gordon enjoyed a much more successful run on the pop charts.  Clearly, there was plenty of room for both of them!  (kk) 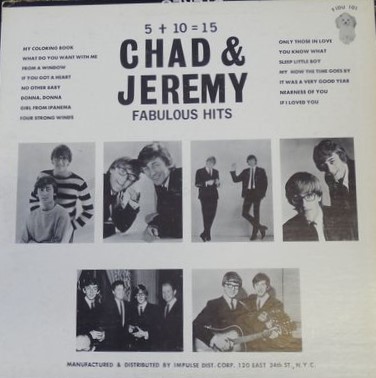 (Check out the photo in the lower right-hand corner on the back of this Chad and Jeremy album ... too funny!!!)
Posted by Kent Kotal at 6:08 AM