Check out "newbie" Kris (Erik) Stevens, gracing this week's WLS survey.  Kris had just started at the station ten days earlier (on Valentine's Day!)  Scroll back to our February 14th post to read all about it ... in Kris' own words.

Meanwhile, this week offers up another great Top Ten ... tracks like "You Showed Me" and "Ramblin' Gamblin' Man" performed very well here ... as did psychedelic gems like "Hot Smoke And Sasafrass" by Bubble Puppy, misspelled here according to SpellCheck, but that's the way they spelled it on the record label, so that's what I'm goin' with!!!  This gem jumps eleven places this week from #38 to #27.


Another big jumper this week:  "May I" by Bill Deal and the Rhondels, which climbs ten places from #33 to #23.


We also get our first glimpse of Badfinger as "Maybe Tomorrow" debuts at #37.  Then calling themselves The Iveys, they would go on to be the most successful new group signed to The Beatles' Apple Records label.


And my favorite version of "The Letter" premiers this week at #38 for The Arbors.  (Yes, I like this version even better than both The Box Tops' #1 Hit and Joe Cocker's intense remake!)


Here's another of my personal faves ... this one STILL sounds great today (the few times that you ever get to hear it!!!)


February 18th – Bee Gee Robin Gibb is best man at his twin brother Maurice’s wedding to Lulu.  (Over 3000 fans show up outside the church!)  Although the marriage only lasted four years, the couple remained friends and Maurice would eventually appear on Lulu’s British Television Series … 27 years later! … to duet with her on The Bee Gees’ tune “First Of May.  Three nights later back in 1969, Lulu and The Bee Gees will appear on This Is Tom Jones.

Also on this date, Johnny Cash joins Bob Dylan in the studio in Nashville, TN, to record "Girl From The North Country."  At least three other tracks are recorded at this same session ... "T For Texas," "That's All Right" and "You Are My Sunshine," none of which will make the cut on the final LP.

Later that evening, at a songwriters party that also included Graham Nash, Bob Dylan, Kris Kristofferson and Joni Mitchell, Johnny Cash hears "A Boy Named Sue" (written by Shel Silverstein) for the very first time.  He records the song five days later ... and it goes on to become the biggest pop hit of his career.

February 20th – The movie “Candy,” starring Ringo Starr (along with a few other actors with a bit more acting experience than Ringo who you may have heard of, including Marlon Brando, James Coburn, John Huston and Walter Matthau among them), opens in theaters 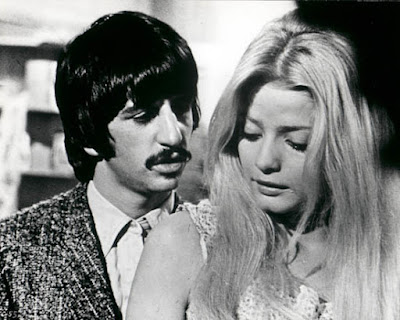 Also on this date, Elvis Presley records "Any Day Now" ...

And Bobby Darin makes a guest appearance on The Dean Martin Show.

February 22nd – Elvis wraps up his recording sessions in Memphis.  The results will yield two brand new albums, “From Elvis To Memphis” and “Back In Memphis.”  By all accounts, these are some of the best sessions of Elvis’ career … The King Is Back.

Also on this date, Lester Flatt and Earl Scruggs make their last appearance together on The Grand Ole Opry ... a nasty split will follow

Meanwhile, Johnny Cash performs a concert at San Quentin Prison with his entire touring ensemble, including June Carter, Carl Perkins, The Carter Family and The Statler Brothers.  The concert is recorded for future release and will spawn the hit single "A Boy Named Sue."  It will also go to #1 in August ... and stay on the charts for 70 weeks.

Also on this date, B.J. Thomas is awarded a gold record for his single "Hooked On A Feeling"
Posted by Kent Kotal at 6:00 AM