"Na Na, Hey Hey, Kiss Him Goodbye" finally unseats The Beatles from the #1 spot after four weeks.  This track (originally recorded as a B-Side knock-off) has lasted forever, used in countless commercials, movies and sporting events.

Diana Ross and the Supremes seem to be next in line for that coveted #1 spot as "Someday We'll Be Together" climbs from #16 to #5 this week ... but don't rule out "I Want You Back" by The Jackson Five, which also enters The Top Ten this week, moving from #15 to #10.


THIS WEEK IN 1969:
November 25th – John Lennon returns his MBE medal in protest of The British Government’s involvement in the Nigerian Civil War, Great Britain's support of America's War in Vietnam ... and his latest single "Cold Turkey" slipping down the charts!

His text in full read:
Your Majesty,
I am returning my MBE as a protest against Britain's involvement in the Nigeria-Biafra thing, against our support of America in Vietnam and against "Cold Turkey" slipping down the charts.
With love,
John Lennon of Bag
(seriously, we don't make this stuff up!!!) 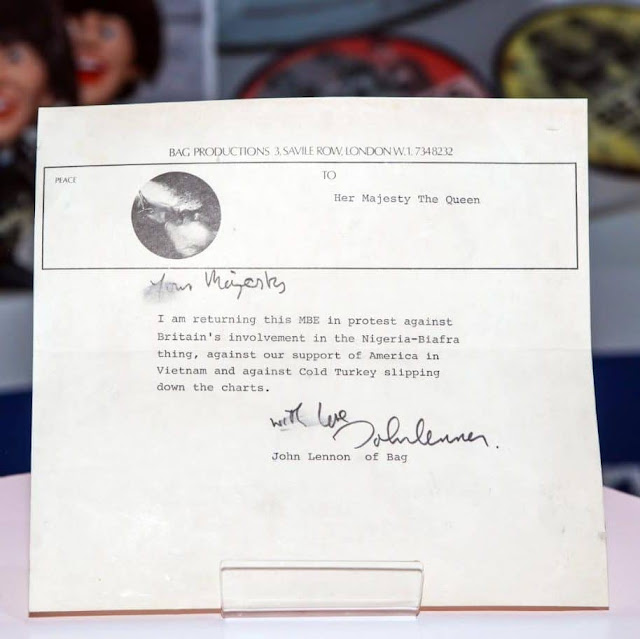 Also on this date, Neil Diamond is divorced from his wife Jayne.

November 30th – The three remaining Monkees make their final live appearance at a show in Oakland, California.  (Peter Tork had quit the band seven months earlier after their 33 1/3 Revolutions Per Monkee aired on television.)  Michael Nesmith announces his plans for a new group, The First National Band, while Davy Jones and Micky Dolenz say that they will continue on as a duo performing as The Monkees.  (The big joke going around entertainment circles was that eventually after the pair split up, ONE of them would start billing himself as “The Monkee” just to keep the name going!)  All four Monkees would reunite on stage again in 1986 (17 years later!) for a performance at The Greek Theater in Los Angeles.

Also on this date, Simon and Garfunkel’s first television special airs, but not without incident.  Sponsor AT&T backed out after learning that footage of Bobby Kennedy’s funeral march and the War in Viet Nam would be shown.

Also on TV tonight … Neil Diamond appears as a guest on The Ed Sullivan Show and performs “Sweet Caroline” and “Holly Holy.”  (Probably could have really used the money after his divorce five days earlier!)

December 1st – Barry Gibb announces that he is leaving The Bee Gees, stating that he was “fed up, miserable and completely disillusioned.”  (Brother Robin had quit earlier in the year, pursuing a solo career.)  They would reunite the following year and record two INCREDIBLE comeback singles, “Lonely Days” and “How Can You Mend A Broken Heart,” both of which went to #1 on the charts.  (After reforming, Robin said “If we hadn’t been related, we would probably never have gotten back together.”  The reunion paid off.  After their career began stall a few years later as their lush ballads began to fall out of favor with the listening audience, they all but reinvented themselves … and a good chunk of disco, too, in the process, scoring EIGHT #1 Singles between 1975 and 1979, with hits like “Jive Talkin’,” “You Should Be Dancing,” “How Deep Is Your Love,” “Stayin’ Alive,” “Night Fever” and others.  Their soundtrack to the film “Saturday Night Fever” topped the Album Chart for 24 weeks, sold over sixteen million copies and rode the charts for two and a half years.

Also on this date, Delaney and Bonnie perform at The Royal Albert Hall in London.  In the audience that night are Eric Clapton, George Harrison and Ringo Starr.  Clapton and Harrison will go on to tour and make future appearances with the married couple in the future.