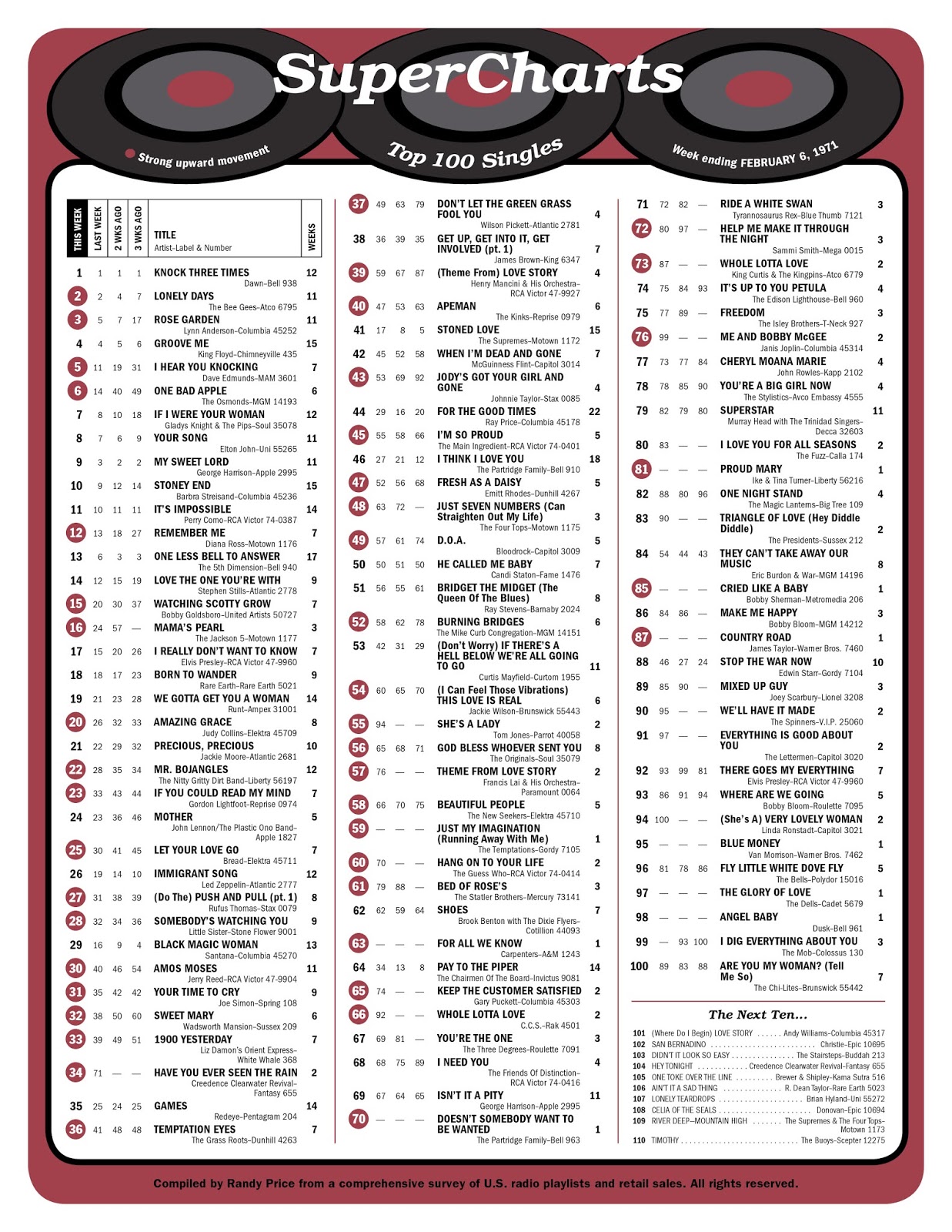 "Knock Three Times" notches its fourth consecutive week at #1, thus tying it with George Harrison's "My Sweet Lord" for the most weeks at #1 in this relatively new year.  (So far these are the ONLY two records to reach the top of the chart in 1971.)

The Osmonds continue to move up the chart with "One Bad Apple."  This one has gone from #40 to #14 to land at #6 this week.  Their teeny-bopper counterparts, The Jackson Five, make another impressive move as their latest, "Mama's Pearl," moves from #24 to #16.

A future classic moves up 39 places this week as Tom Jones' recording of the Paul Anka song "She's A Lady" leaps from #94 to #55. "Amos Moses" by Jerry Reed finally makes its big move this week, jumping from #40 to #30 in its ELEVENTH week on the chart!  But NOBODY (other than Mr. Sock-In-The-Pants himself) could compete with Creedence Clearwater Revival's move of 37 places as "Have You Ever Seen The Rain" jumps from #71 to #34 in its second week on the chart.  (See Jerry ... THAT'S the way it's done!!!)

The top debut this week belongs to The Temptations and "Just My Imagination," one of the most beautiful songs they ever recorded.  It premiers at #59.  Not far behind are The Carpenters, back on the chart with "For All We Know" (from the movie "Lovers And Other Strangers"), new at #63 ... while The Partridge Family follow a few paces behind with their follow up to their #1 Hit "I Think I Love You," "Doesn't Somebody Want To Be Wanted."  It bows at #70.

Two other timeless classics begin to make their move in the lower region of the chart ... Janis Joplin's recording of "Me And Bobby McGee" climbs 23 places from #99 to #76, thus giving singer / songwriter Kris Kristofferson TWO budding hits on this week's chart (he also wrote the Sammi Smith hit "Help Me Make It Through The Night") ... and Ike and Tina Turner's COMPLETE reworking of CCR's "Proud Mary" premiers at #81. (I guess that gives John Fogerty two songwriting hits on the char this week, too!)

I never cared for "I Think I Love You" when it was out ... I can tolerate it a little better now, some fifty years later ... but (other than the corny recitation in the middle of the song that even David Cassidy HATED), I thought "Doesn't Somebody Want To Be Wanted" was the better hit.

That being said, I always liked James Taylor's follow-up hit "Country Road," too.  This one seems to be all but forgotten these days.
And Van Morrison's "Blue Money" is another one of those tunes that I liked the very first time I heard it ... a real "stick in your head" tune.

This Week in 1971:
January 31st – The Jackson Five are presented with the Key To The City for their hometown of Gary, Indiana

Also on this date, Bobby Darin walks off the set of The Jackie Gleason Show when he is forbidden from singing his latest record “Long Line Rider.”  (The song’s subject matter, deemed too controversial for television, took the government to task for its poor treatment of prisoners in America.)

February 1st – Michael C. Hall is born  (We love ya, Dex!)  He'll reprise the role later this year when "Dexter" return to Showtime for ten brand new episodes after an eight year hiatus. 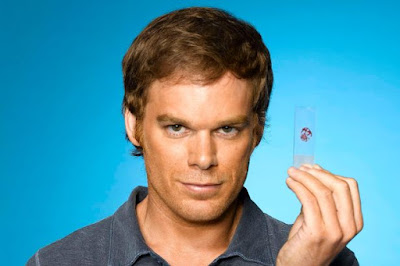 Also on this date, Rolls-Royce in Britain goes bankrupt and is nationalized