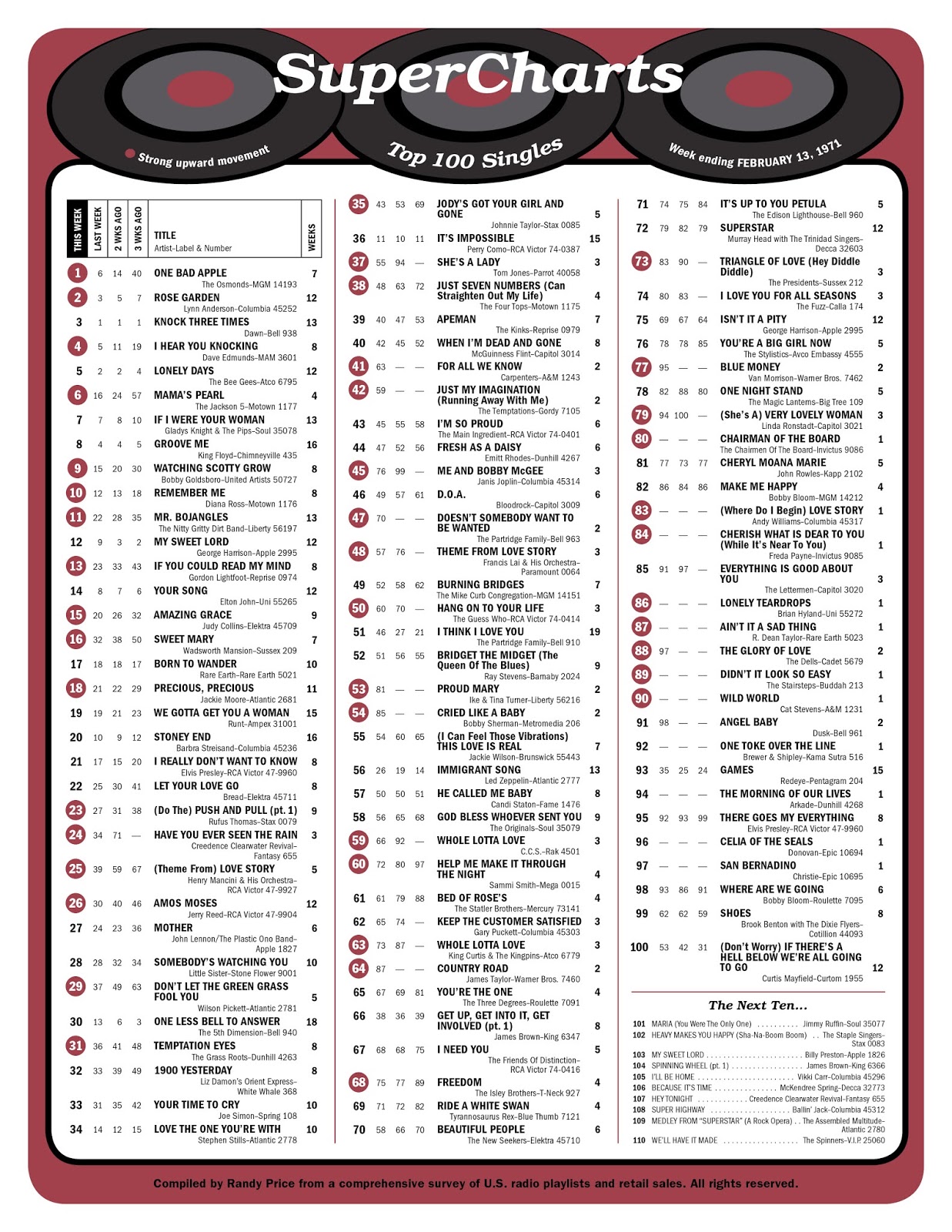 The Osmonds make the leap to the top of the charts this week as "One Bad Apple" climbs from #6 to #1 in its fourth week in The Top 40. Lynn Anderson's "Rose Garden" moves up a spot below it to #2.  Meanwhile, The Jackson Five jump ten places as "Mama's Pearl" moves from #16 to #6.  (The Osmonds and The Jackson Five would battle for teeny-bopper hearts for several years, led by teen heartthrobs Donny Osmond and Michael Jackson.  Although overall their sound was quite different, "One Bad Apple" sounds VERY much like a Jackson Five record.  Truth is, The Jackson Five turned the song down first ... so the Osmonds scooped it up and took it all the way to the top of the charts.)

"Mr. Bojangles" by The Nitty Gritty Dirt Band, "If You Could Read My Mind" by Gordon Lightfoot and "Sweet Mary" by Wadsworth Mansion all make leaps of ten spots or more with in this week's Top 20.  The biggest mover within The Top 40 this week is Tom Jones, whose latest hit, "She's A Lady," climbs from #55 to #37, a jump of 18 spots.

This week's highest debut is all the way down at #80 ... it's the latest from The Chairmen Of The Board called "Chairman Of The Board."  (No, that is NOT a typo!!!)

Playing Favorites:
Cat Stevens debuts at #90 this week with "Wild World," a song that was ALL over the radio for MONTHS in 1971.

I also liked "One Toke Over The Line" by Brewer and Shipley ... another one of those "stick in your head all day" songs.

And the soft-rock lover in me was partial to "The Morning Of Our Lives" by Arkade, a band that included Austin Roberts, who would go on to enjoy success as a solo artist later this decade.  This would have to be the one real Forgotten Hit among today's selections


This Week In 1971:
February 8th – Frank Zappa’s concert at Royal Albert Hall in London is cancelled because a representative of the venue found obscene lyrics in Zappa’s “200 Motels” piece

February 9th – The greater Los Angeles area is hit by a massive earthquake that kills 64 people and injures at least 2000 more
Also on this date, Bobby Darin undergoes heart surgery in Los Angeles
Also on this date, Negro League Great Satchel Paige is nominated for Major League Baseball's Hall Of Fame.  (Baseball Commissioner Bowie Kuhn originally campaigned for a "separate wing" for Black, Negro League Players ... but ultimately agreed that Satchel should be enshrined with all of the other baseball greats.)
LOOK FOR SPECIAL FORGOTTEN HITS FEATURES ON BOBBY DARIN AND SATCHEL PAIGE LATER THIS WEEK ...
We'll be featuring Bobby on Tuesday, February 9th ...
And have a special spotlight feature on Satchel Paige on Wednesday, February 10th.
Be sure to check back ... and spread the word!

Also on this date, The US, The UK and The USSR sign The Seabed Treaty, outlawing nuclear weapons on the ocean floor