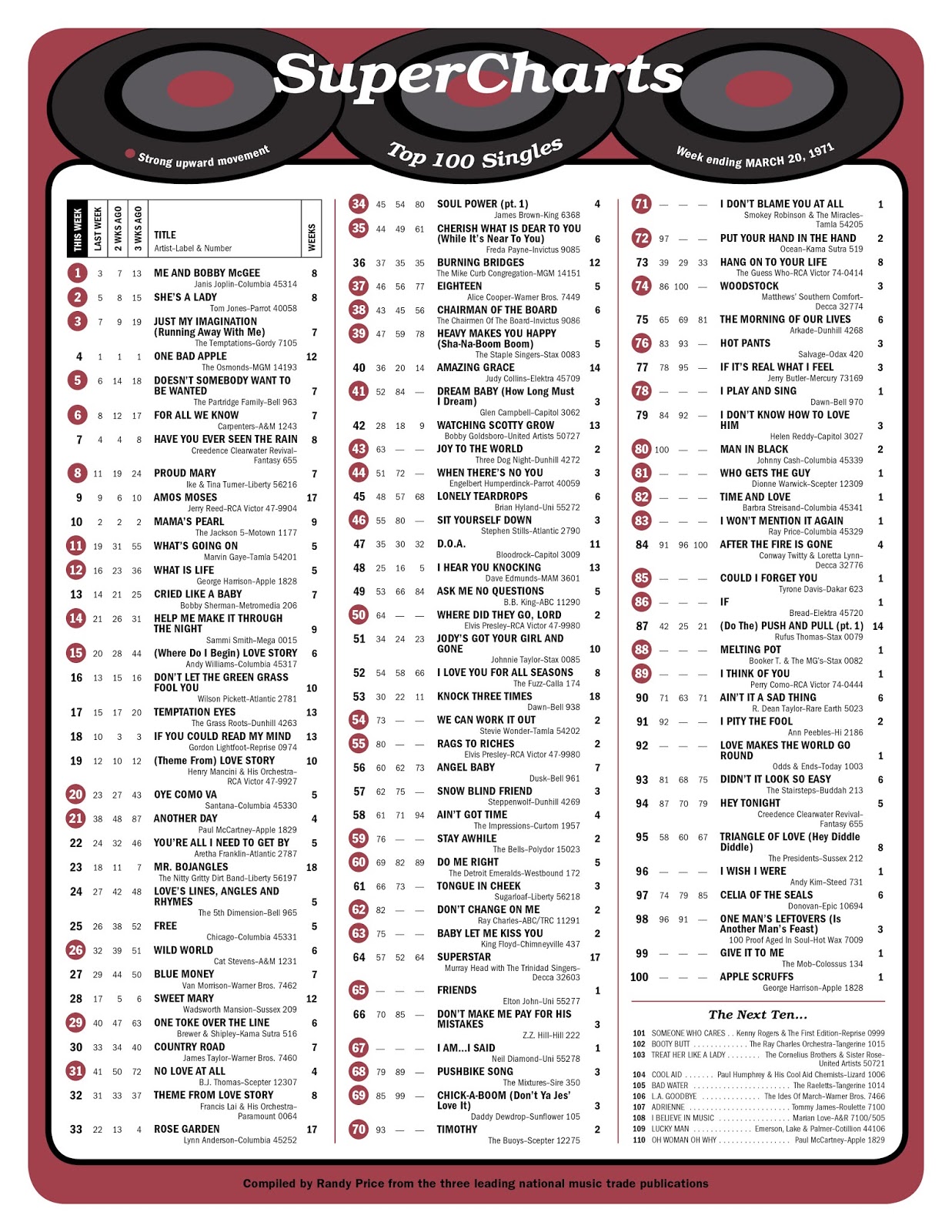 One look at this week's Top 40 shows you immediately how much diversity was still present on the charts in 1971.

You've got everything from a blues rocker singing a country and western tune (Janis Joplin's version of Kris Kristofferson's "Me And Bobby McGee," the brand new #1 Record this week, as predicted) to show-stopper Tom Jones ("She's A Lady") to Motown (The Temptations' "Just My Imagination,"
"Mama's Pearl" by The Jackson Five, "What's Going On" by Marvin Gaye) to Teeny-Bop Pop (The Osmonds' "One Bad Apple," The Partridge Family's "Doesn't Somebody Want To Be Wanted," the aforementioned Jackson Five tune, Bobby Sherman's "Cried Like A Baby"), soft-rock, adult-contemporary tracks by The Carpenters ("For All We Know"), Andy Williams, Henry Mancini and Francis Lai all represented with their respective interpretations to the theme from the hit film "Love Story," funky soul from Wilson Picket ("Don't Let The Green Grass Fool You"), James Brown ("Soul Power), "Proud Mary" by Ike and Tina Turner and "You're All I Need To Get By" by Aretha Franklin ... country / folk tracks like "Country Road" by James Taylor, "Rose Garden" by Lynn Anderson, "One Toke Over The Line" by Brewer and Shipley, "Amazing Grace" by Judy Collins, "Amos Moses" by Jerry Reed, "If You Could Read My Mind" by Gordon Lightfoot, "Help Me Make It Through The Night" by Sammi Smith (another Kris Kristofferson song) and "Mr. Bojangles" by The Nitty Gritty Dirty Band to everything in between ... George Harrison's "What Is Life," Paul McCartney's "Another Day," Alice Cooper's "Eighteen," "Heavy Makes You Happy" by The Staple Singers, "Temptation Eyes" by The Grass Roots, "Oye Como Va" by Santana, "Free" by Chicago, "No Love At All" by B.J. Thomas, "Love's Lines, Angles And Rhymes," "Wild World" by Cat Stevens and "Blue Money" by Van Morrison ... ALL of which were played side-by-side, all day long without the slightest amount of hesitation or reservation.  This was Top 40 Radio, circa 1971 ... and we took it all in.

New on the chart this week ... "I Am, I Said" by Neil Diamond, one of his signature tunes, "Friends" by Elton John and "If" by Bread ... all soft-rock classics that are still hangin' around on the airwaves today, some fifty years later.


March 16th – At the 13th Annual Grammy Awards, Simon and Garfunkel’s “Bridge Over Troubled Water” captures all of the attention, winning awards for Record Of The Year, Album Of The Year, Song Of The Year, Best Arrangement Accompanying Vocalists, Best Engineered Record and Best Contemporary Song.  (Fifty years later this is STILL one of my Top Ten Favorite Albums of All-Time) 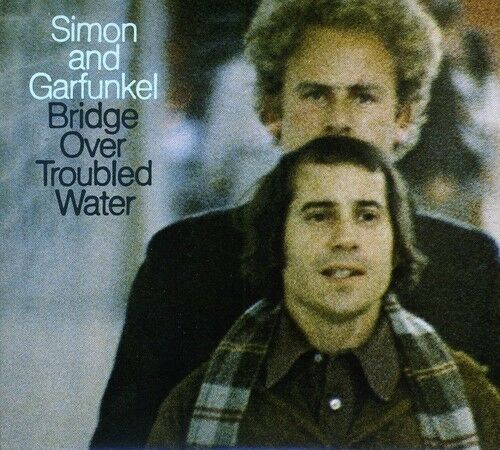