The three hour special will feature three separate airchecks of Landecker on WLS in the ‘70’s … and each will include an edition of his trend-setting Boogie Check bit.

You can “Listen Live” here:  rewoundradio.com/instantonchromebook.html

Landecker built a national following while doing the evening shift at WLS (The Big 89) from 1972 to 1979 and is a member of The National Radio Hall Of Fame.

Relive some of these special memories this afternoon on Rewound Radio!  (kk)

BTW – John is currently back on the air on WGN 720 AM in Chicago … and while music isn’t the main focus of this station, I am happy to report that he has retained all of his wit and personality ... so it's still a fun listen.

Good response to our Chubby Checker piece on Friday …

We listen to CFZM during morning drive every day - not because we're huge fans of CanCon, but because it's live, non-political radio playing some great music. I was just now reading the Chubby Checker piece on FH when "Let's Twist Again" came on the radio.

YOU KNOW MY REACTION TO THIS …

WE ARE IN THE WRONG ERA.

WE WILL NEVER GET IN TO THE ROCK AND ROLL HALL OF FAME.

WHY?  BECAUSE WE ARE BUNCHED IN WITH BUBBLE GUM ACTS AND CUTE ACTS WHO ARE NOT ROCK AND ROLL … AND THEY NEVER WERE … SO THAT HURTS US.

THAT’S IT … VERY SIMPLE … WE WILL NEVER GET IN … NEVER, THANKS TO THOSE ACTS FROM THAT ERA

From the 1960's to the 1990's, generations of Dee Jays would show up at their wedding, birthday, bar mitzvah, and class reunion parties, with five things:  lights, sound, music, a limbo stick, and 1/2 dozen hula hoops, for the Twist contest.

Wow, Kent, the moment I saw this email this morning I thought, Oh My God, hopefully he did not pass. Glad to see he's still alive and well.

Yes, we all are sick about the great performers that have not been recognized by the Rock and Roll Hall of Fame. I was so relieved in the last couple years to at least see some of my favorites going in ... among them Chicago, The Moody Blues, The Hollies and The Zombies.

When I look now at the nominees, there's not much there that I recognize … certainly not much in my era of the 60s. I just take it for granted that there will be less and less people that I will know to be nominated.

I'm sure a lot like you, I can't wait see live performances … I sure miss that.

Since I'm on the topic of live performances, wouldn't it be something if The Cornerstones of Rock could coax Spanky (and Our Gang) out of retirement and come up and perform a few hits! Hell, she can fly out of California with Doody!

It sure would!  I haven’t seen her since she was singing the Mama Cass parts in the reformed Mamas and Papas in the ‘80’s!

Chubby was due to perform at The Arcada before Covid shut everything down.  (I saw him a few years ago at The Genesee Theater and he really put on a great show.)

Here’s hoping this is one of the shows to be rescheduled once we can go out and enjoy live music again.  (And can you even imagine what a great double bill it would be if you paired Chubby Checker and Freddy Cannon on the same stage?!?  And Bobby Rydell has played there, too!  Maybe Ron can get a Christmas show together and Bobby and Chubby can recreate their version of “Jingle Bell Rock” again for all to see!  (Hey, we can dream, can’t we???)  kk

When I was a member of the Rock and Roll Hall of Fame nominating committee, I brought up the logic of nominating Chubby year after year but, alas, he never made the final ballot.  It was truly frustrating and then when his hit version of “The Twist” was inducted into the newly established singles category which, I’m afraid, will be used to deflect from the possibility that Chubby, himself, will be inducted.

As far as ABKCO is concerned, Allen Klein was always supportive of Chubby’s induction.  The company has undertaken a terrific reissue campaign in celebration of the 60th anniversary of Chubby’s “Twist” phenomenon and you and FH covered that, for which I am thankful.

I spoke to Chubby when “The Twist” was inducted and wrote this piece:

ABKCO even created a new video for the occasion:

I’m glad that ABKCO has finally come around and started reissuing some of the great catalog of music that Cameo / Parkway created in the early ‘60’s … it certainly was the Soundtrack of American Pop Music at the time.  (Although I've got to attribute most of that thank you toward Allen’s son Jody Klein, who I think has been VERY instrumental in righting a lot of wrongs and long-standing bad feelings between not only the C/P folks but artists like Herman’s Hermits, The Animals and the like, whose best work wasn’t properly represented for decades as well under his father's regime.)

As you know, I’ve been a long time supporter of Chubby’s proper role in the landscape of rock … as have you.  It’s just about time that The Rock Hall mans up and gives this guy his due!  (kk)

THIS AND THAT (Murray The K, Muhammad Ali, Ed Sullivan and More):

Gary also sent us this link to some vintage Murray The K broadcasts, available thru MixCloud.  (I’ve gotta tell you, I have REALLY been enjoying MixCloud lately.  I first started listening whenever I missed one of Sam Tallerico’s Lost And Found Oldies Shows … but they have ALL kinds of great clips available for listening, including airchecks featuring many of our Chicago Radio Heroes like Larry Lujack, John Records Landecker, and more.)  Check it out when you get a chance!

(I’ve gotta be honest with you ‘tho … I didn’t hear ANYTHING exciting here during Murray The K’s show … in fact, if anything, he sounded so laid back that I felt he might actually fall asleep at any point in time!  Not quite the fast-talking jock from years before!)  kk

Here's a bit of what Murray the K sounded like on the air in NYC.

Years later, Murray was nice enough to accept my invitation to be a guest lecturer at the class I taught at UCLA, "Pop Music on Record: Yesterday and Today."  At first, the California-raised students had no idea who he was -- but Murray quickly turned them into fans.

"The History of Rock 'n' Roll"

It is the 50th anniversary of the first Ali-Frazer fight … and in this week's edition of FH, you mentioned that you were a huge fan of Muhammad Ali. To that end, I have a fun "Music and Muhammad" story for you.

Years before my time with the Rip Chords, I was on a show at the historic State Theater, in Easton, PA., hometown of the "Easton Assassin," Larry Holmes.

On the bill, for the evening's concert were The Orlons, Freddy "Boom Boom” Cannon, The Coasters, and the New Orleans soul singer, Lloyd Price, an Ali favorite.

It was the Labor Day timeframe of 1974, and, Ali was in training at his Deer Lake, PA facility. He was preparing for his "Rumble in the Jungle" against George Foreman.  His sparring partner at the time? None other than Easton's Larry Holmes.

Holmes told Ali that Lloyd Price was in concert back home.  Ali wanted to go see the show. So, their limo driver drove them both to Easton to see the concert.

On stage, Freddy Cannon opened the show. As usual, he was uptempo and rockin' on every song in his set. Next up were Philadelphia's Orlons. They, too, started to run through their hits, when all of a sudden, there'a a disturbance in the crowd.

Soon, the entire audience was standing with their backs to the stage, all amazed that Muhammad Ali was sitting there.

As the next Orlons song finished, The MC came out and he welcomed “special guests" Muhammad Ali and Larry Holmes to the show, and then announced  that we would now be going to Intermission.

Intermission started early and the curtains closed. I was onstage.  So, the next thing I saw was Ali walking from behind the curtain to the stage area. He was immediately surrounded by the Coasters.

One of the Coasters asked him, "Champ?  Wha'cha gonna do to that man Foreman?" And Ali replied, "Brothers, If you wants yo' money … And you wants it free?, Best bet yo' dollars on Brother Ali."

He instantly had every member of the show in his hands. He was the most dynamic personality I've ever been near. I was able to shake his hand that night.  It was like someone had handed me a Paver Stone. It was a moment. 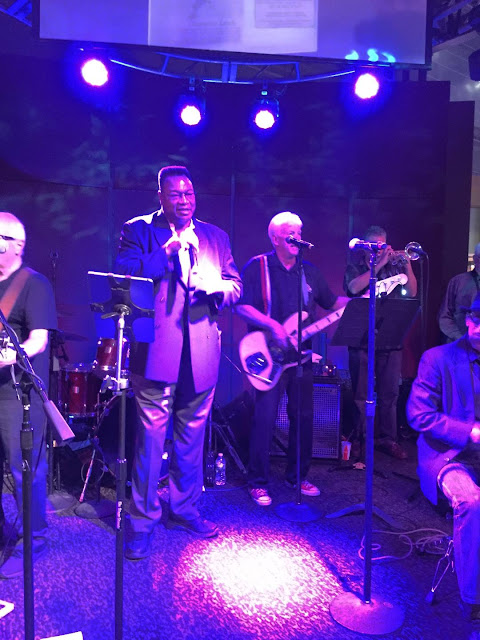 Ironically, forty years later I was on stage, at the Sands Casino, playing bass for Larry Holmes, now an Ex-Heavyweight Champion himself.

Off stage, I asked him about that night in 1974. He told me it was like that everywhere they went. I believed him.

Hope you enjoyed this story ...

The same issue of FH also talked about a NYC Cousin Brucie / Micky Dolenz / BB King's show some years ago.

Believe it not, I was on the show, and I have photos.

It’s amazing the memories we can all stir up for one another.

Have you heard the good news?

Yes … but unfortunately these are the same abbreviated clips that The Decades Channel has been showing for ages now.  (Decades and Me-TV all fall under the same management umbrella.)

Here’s hoping that now that The Ed Sullivan YouTube Channel is airing full-length performances that haven't been seen in over fifty years, somebody will put together a new series of Ed Sullivan clips to run on TV again.  (Andrew Solt, who owns the Sullivan library, has contracted this work out … I don’t know that we’ll ever see full-length, complete programs again … or that we need to! ... but the sheer star power of nearly every episode is enough to keep any fan from this era coming back for more.  (kk)

Speaking of which, here are some recently posted clips posted to The Ed Sullivan Channel on YouTube that you may want to check out … all are either available now or beginning next week for viewing …

Creedence Clearwater Revival – Down On The Corner (November 16, 1969)