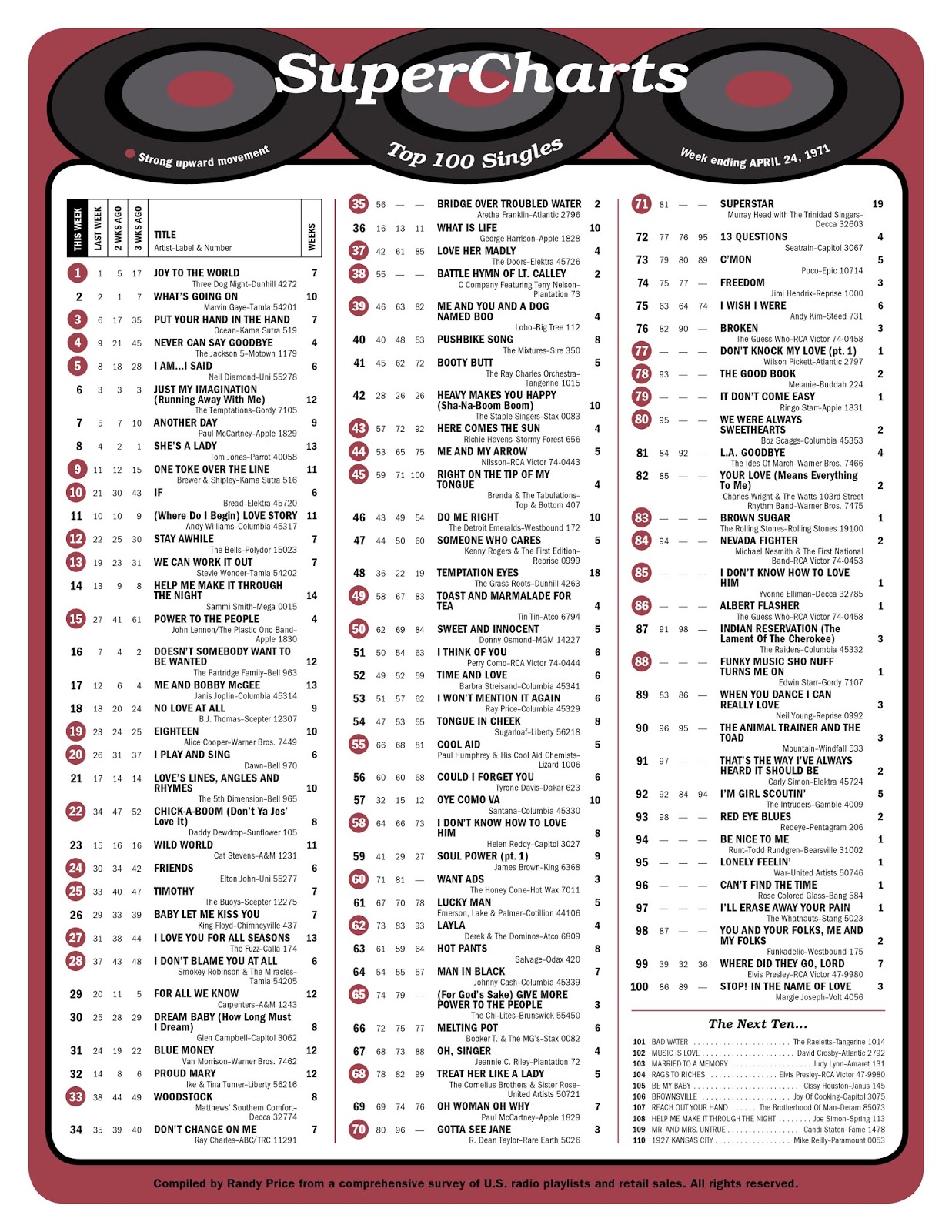 "If" by Bread, "Stay Awhile" by The Bells and "Power To The People" by John Lennon all make moves of ten places or more within this week's Top 20 ... as Three Dog Night continue to reign on top with "Joy To The World."

Other big moves within The Top 40 include "Chick-A-Boom," "I Don't Blame You At All," Aretha's version of "Bridge Over Troubled Water" and "Battle Hymn Of Lt. Calley."

Outside the Top 40, we see moves of 14 places for Richie Havens' version of "Here Comes The Sun," 14 places for Brenda and the Tabulations' "Right On The Tip Of My Tongue," 12 places for Donny Osmond's "Sweet And Innocent," and eleven places each for "Want Ads" by The Honey Cone and "Layla" by Derek and the Dominoes.

The Top debut this week belongs to "Don't Knock My Love" by Wilson Pickett ... but the stand-out debuts for me are "It Don't Come Easy" by Ringo Starr (giving all four former Beatles a spot in this weeks Top 100), "Brown Sugar" by The Rolling Stones, "Albert Flasher" by The Guess Who and "Can't Find The Time" by Rose Colored Glass ... all of which make this week's list of Playing Favorites.  Yvonne Elliman's version of "I Don't Know How To Love Him" also makes the chart this week, premiering at #85.

This Week In 1971:
April 18th – A Diana Ross television special airs on ABC.
Bill Cosby and The Jackson Five appear as Diana’s guests.
You can catch the entire special here:
https://www.youtube.com/watch?v=JZigBKE5MqA

Also on this date, actor David Tennant is born

April 19th – Members of The Manson Family (Tex Watson, Patricia Krenwinkel, Susan Atkins and Leslie Van Housten) are sentenced to the gas chamber.  Their sentences would be commuted to life imprisonment in 1972, just like Charles Manson’s was.  Watson, Van Housten and Krenwinkel are still incarcerated.  Atkins died in 2009.