Check out THIS clip sent in by FH Reader Clark Besch …

But NEITHER of us ever saw THIS one before!!!

The Red Skelton Show from September, 1963 (I had just turned 10 and she was 10 days past her 3rd birthday … so that’s probably why … but still, how has this not surfaced until now?!?!)

I remember Dick Clark running some EXCEPTIONALLY rare clips in the past on his anniversary shows … but still this was never one of them.  David Marks!  Dennis with some pretty whack hair!  Brian Wilson doing a shuffle dance!  (And check out their pants!!!)

This was fun, fun, fun to see now after all these years!  Thanks, Clark!

I don't think I have ever seen this one posted until yesterday.  TWO songs too!  Dennis looks so ... funny!

(Prior to us posting this, only 600 people had seen it … here’s hoping it makes the rounds and goes thru the roof!!!)  kk

Les McKeown of The Bay City Rollers passed away on Tuesday, April 20th.

Ironically, it was The Bay City Rollers (led by Stuart "Woody" Wood ... McKeown was no longer a member) that we were supposed to see in concert at The Arcada Theatre when the Covid-19 first forced the lockdown back in March of last year.  (Our Granddaughter was here visiting at the time and that show would have been her first live concert.  For a time there, we weren't even sure they were going to allow her to fly home!)

On the one hand, I guess you can reflect on how much the world has changed since then ... but even a soft return to live shows reminds us that we're really not out of the woods quite yet on this whole pandemic scene.  Those of us who see a lot of live shows are aching to get back in the swing of things ... but not at the risk of contracting the disease.  (This goes for many of the performers as well.)  kk

With just two weeks to go before the polls close, voting for this year's Rock And Roll Hall Of Fame candidates is lagging behind last year's vote tally ... in fact, virtually HALF as many votes have been cast this year, perhaps a testament to the times ... or, perhaps more accurately, a reflection of the talent pool on this year's ballot.

Tina Turner maintains her lead over Fela Kuti (by about 25,000 votes as we go to press this morning.)  This increase can likely be attributed to the Tina documentary currently running on HBO.

The Go-Go's are still in third place, followed by Iron Maiden and Foo Fighters.

You can cast YOUR votes here: https://vote.rockhall.com/

Kent,
With your comments on and about Mark Lindsay, earlier this week I heard his MISS AMERICA on an old aircheck I had. Now that's a record I haven't heard since I don't know when.
Sandy wanted to know what you did when you hear a song that you really like but haven't heard it in years, or in other words "an oldie but goodie?" Well, I don't get up and dance ... especially if I'm driving my car. If I did, and that's a big IF, I probably would mouth out the words to it. That's just it, no station in OKC is playing the  music like we really like.
I did know that Phil Spector produced the Curtis Lee song, PRETTY LITTLE ANGEL EYES. Now without going over my surveys, I believe that record went to #1 here in OKC.
I also have an original Teddy Bears' recording of TO KNOW HIM IS TO LOVE HIM, later remade by Peter and Gordon. And as for the Phil Spector album,  I remember going into the record store where I bought all my records, Wilcox Records, and asking for the new Christmas album by Phil Spector, A CHRISTMAS GIFT FOR YOU, in early December of 1963. I remember Mrs. Wilcox told me that she didn't particularly like this album in the way it did the classic Christmas songs. Of course, we didn't know then that those songs on that album would turn out through the years would be played during the Christmas season.
Now as for that version of THE SCREW by that singer you posted, I did not know that a cover (?) version of that record came out.  I DO have a copy of the Phil Spector record, but here is what I discovered and wrote on my record sleeve ...
First, I don't ever remember the record  ever being played here in the OKC area. The record itself shows a time of 5:45 on Part I and 5:55 on Part II. However, I have listed that on the sleeve that Part I is 4:30 long as well as Part II. Now why the time on the label of Part I and Part II is different from the actual time, I do not know.
Finally, that cartoon you posted at the bottom ... that is one that I really laughed out loud. How true, how true.
Larry
Yeah, that one totally cracked me up as well.
I don't know if you've had a chance to read our Phil Spector Series yet, but it explains the poor sales of Phil's Christmas Album, due to the assassination of President John F. Kennedy just a couple of weeks before.  Nobody was really feeling in much of a festive mood at the time ... but you're right ... those arrangements that seemed so odd and out of place at the time have gone on to become, in many cases, the definitive way these songs are still being interpreted today.
On a final note, I've heard Me-TV-FM play Mark Lindsay's 1970 hit "Miss America" before ... but to me, I'm not sure that that one even qualifies as a "Wow!" record, if only because so few people will remember it.  (It peaked at #31, right between Mark's solo hits "Arizona," #9 and "Silver Bird," #20.  I've also heard Me-TV-FM play Mark Lindsay's version of "And The Grass Won't Pay No Mind," too ... a VERY nice reading of this song (and a #36 hit later that same year.)  kk
Has anyone ever given a reason why the 'Honey's House' video is always taken down. There's nothing offensive about it. It's not like the Smothers Brothers don't allow any of their stuff on You Tube, and the same goes for CBS. I doubt that Bobby Russell's estate has a problem with it. What's the scoop here? Enquiring minds want to know.
Jack
Actually, Smothers Brothers television clips are pretty closely monitored ... much as the Ed Sullivan clips used to be (before they were bought up and given their own YouTube Channel.)  I noticed that they wouldn't let you watch it on my site immediately ... and by last night I could no longer find it on YouTube either.
Quite a shame really ... over a dozen years ago, they were SUPPOSED to release "The Best Of The Smothers Brothers Comedy Hour" (or, as we insiders refer to it, "The Smothers Comedy Brothers Hour") over the course of three multi-disc sets.  For whatever reason, they decided to release these in REVERSE order.  (I never quite got that one!)  As such, Season Three and Season Two came out ... and, to this date, Season One never has.
I'm sure music licensing may be a big factor here.  ("Honey's House" didn't make any of these box sets either), as The Smothers Brothers typically had some of the biggest names in music clamoring to be on their VERY hot show.
Censorship may be another ... they were notoriously fighting with CBS every step of the way for trying to push the envelope beyond TV's normal practices ... and often got away with airing pieces that were SO far over the censors' heads, they never even really knew what hit them.
I, for one, would love to see a much more in-depth package put together that finally honored this comedy duo they way they deserve to be remembered.
You'll still find random clips on YouTube ... but they're typically in piss-poor quality like this one, one of my all-time favorite musical bits from the show.  (kk)

The Sixties pop scene in the UK really didn't end until the spring of 1971 with Marc Bolan's Top Of The Pops tv appearance. It was the birth of Glam Rock (flamboyant costumes, make-up, and glitter). Bolanmania led to the latest pop culture craze! Glam singer-songwriters like Bolan, Gary Glitter, and Noddy Holder of Slade would go on to regularly top the UK charts (13 times between them). In addition, there was a new songwriting team in London, Nicky Chinn and Mike Chapman, that was behind some of the genre's biggest hits. Their catchy glam-pop confected songs were undeniably written for the youth audience. It was a time when record companies still targeted singles to kids in the UK, more serious musicians created albums. The fledgling pensmiths' initial effort gave the struggling band Sweet their first hit record. "Funny Funny" reached UK#13 at the end of April, fifty years ago. But Chinnichap, as the partnership became known, were just getting warmed up. As pop producers and writers, they became so phenomenally successful, they were nicknamed the "hit factory."  The two were a major force behind multiple hit singles by Sweet, Mud, Suzie Quatro, Smokie, Racey and others. Chinnichap created five UK chart toppers with Sweet (1), Mud (3), and Quatro (2). On five different weeks in 1974, the top two singles in the UK were Chinnichap songs. As glam lost its appeal, they provided less teen oriented hit material to the likes of Tina Turner, Huey Lewis, Pat Benatar and others, well into the Eighties. Turner and Benatar both won Grammys. Two of Chinnchap's compositions topped the US Billboard charts, "Kiss You All Over" by Exile and Toni Basil's "Mickey."  Chapman had moved to Los Angeles and carried on as a highly respected record producer. He worked on The Knack's "My Sharona," Nick Gilder's "Hot Child In The City" and Blondie's "Heart Of Glass," all US number ones. Chinnichap had co-written over fifty UK top 40 hits, but few of their glam-era chartbusters ever made much of an impact in the US. One was Sweet's biggest US hit, "Little Willy", in 1973.
Mike Gentry

And, you can still help somebody fulfill a long-time search for an old favorite.

Love your website! Found it ‘by accident’ and wish I’d known about it years ago!

I’ve been trying for ages to find a song I swear was written/performed by Neil Sedaka. Not 100% sure of the title, but it may be called ‘Going Nowhere’ or ‘Nowhere’.

I saw him sing it on TV years ago but haven’t been able to find anything about it since then!

I remember the melody and some of the lyrics but that hasn’t been any help in my search!

Any chance you or any of your readers/followers might know of it?

It was released as a single in Great Britain, apparently before Elton John got involved with revitalizing his career, which quickly blossomed here in The States, too.  (We got it as an album on his comeback album “Sedaka’s Back,” the same album that gave us the #1 Hit “Laughter In The Rain” and inspired The Captain and Tennille to record “Love Will Keep Us Together.”  (kk)

I was just answering your first email when this one came in!

THANK YOU SO MUCH! You’ve made my day!

We'll never get 'em all ... but I'll betcha we've STILL got about a 90% success rate after all these years.  This one just came a little bit faster than most since I was able to solve it myself without putting it out there to our massive team of experts!  (kk)

We've all seen those childhood photos of stars before ... but this one Frank B. sent in totally cracked me up, too!!! (kk) 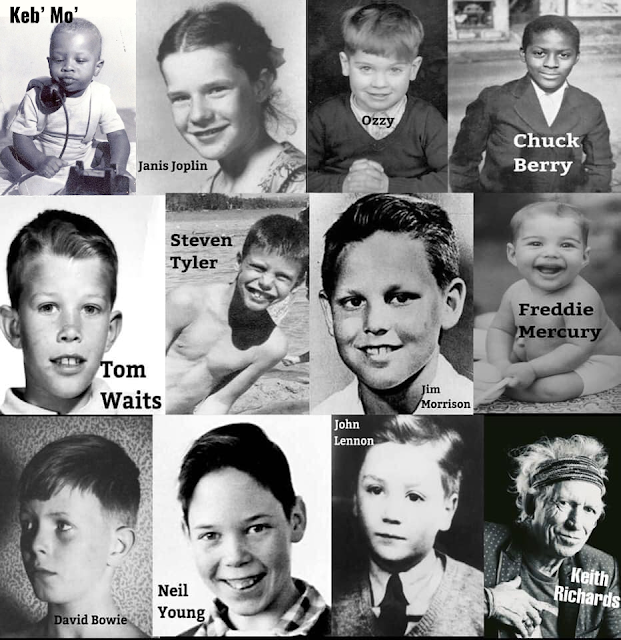