Forgotten Hits Reader Rich Turner sent in this review of a show he saw last weekend for us to share with our readers ... (So excited that things are starting to open up again!)

Rich saw KANSAS in Clearwater, Florida ... and it sounds like it was a really good show.  (We're trying to get him to do a follow-up review of Creedence CLEARWATER Revisited in Kansas ... but as of right now anyway, no such show currently exists.)

Down here in Clearwater, Florida, we are slowly getting back into the swing of things from the over a year long pandemic. Most of our performing arts centers have been open for a few months now, albeit at 50% capacity. Very slowly, a few major artists are scheduling some shows, especially in areas where they can get a few tour stops.

On May 8th, here at Clearwater's Ruth Eckerd Hall, Kansas returned to the stage for their first performance since March of 2020. Ruth Eckerd announced this performance in March of this year and tickets went on sale a week later. I noticed that prices were somewhat higher than before, but being a huge Kansas fan, that did not stop me from purchasing two seats six rows from the stage at $137.00 apiece.

I have seen Kansas several times in the past and have always loved and appreciated their progressive rock music and I got to meet the band in February, 2019, on a Classic Rock Legends cruise. If you ever get a chance to take one of these rock and roll cruises, do not hesitate. They are outstanding.

Like I said, the capacity was at about 50% for this show. In a typical row, there would be two seats taken and then two empty seats and then maybe four seats used and two more empty and so on. In the rows in front and back of you, they would zig-zag the taken and empty seats so  that nobody would be sitting in front of you or behind you. I really enjoyed this side effect of social distancing.  Everybody was required to wear masks ... however, once the lights went out and the band came on stage, I noticed most people took their masks off. My girl friend and I received both of our covid vaccines in March so we had no problem with this. Concessions were outside the theater in a special roped off area so there would be less contact between patrons ... another idea I liked! Once you entered the theater (after going through a socially distanced temp check), a security guard ran a wand over you (pretty much like the old days) and then your ticket was scanned. Then you could head outside for refreshments or head to your seat. I thought the whole process was handled quite nicely.

And now on to the show.
Kansas has been together for almost 50 years now (boy, am I getting old!) and they still have two original members, drummer Phil Ehart and guitarist Richard Williams. Bassist Billy Greer has been in the band since 1985 and violinist and rhythm guitarist David Ragsdale since 1991, although he was gone from 1998-2005 when original violinist Robby Steinhardt returned. Keyboardist Tom Brislin joined the band in 2018.
Original lead singer Steve Walsh retired from Kansas in 2014, and I'm guessing one of the hardest things a long established band has to do then is to try to find a singer of comparable stature and voice to replace your so-called front man. Ask Journey. In my opinion Kansas got the perfect singer to fit the bill. Ronnie Platt easily fills Mr. Walsh's shoes and then some. Gosh, what a voice and what a showman!!!
Guitarist Zak Rivzi had been in the band since 2016 to help Rich Williams with guitar duties and he also helped produce and write their 2016 LP, "The Prelude Implicit" and their 2020 LP, "The Absence Of Presence."  Just a month before this show, Kansas announced that he quit the band to "pursue other endeavors." They did not replace him so I am sure that some of their songs had to be re-arranged (and quickly) for the stage to make up for his loss.
At precisely 8:00 the lights went down and Kansas took the stage to thunderous applause and a standing ovation from the approximately 1000 - 1200 patrons. They started off with one of their biggest hits, "Point Of Know Return," and never looked back. This was billed as a "Classics" show and Kansas classics was exactly what you got. Even though they had released a new album just last year, the aforementioned "The Absence Of Presence," they played no songs off of it. What you got was 16 of their best-loved songs including, of course, "Dust In The Wind," "What's On My Mind," "Song For America" and "Miracles Out Of Nowhere." During the middle of the show they played a three song acoustic set consisting of "People Of The South Wind," "Hold On" and "Dust." The show ended as it should have with their biggest hit and most well-known song "Carry On Wayward Son!!"
The current version of Kansas sound to these ears ... as good as, if not better , than any previous incarnation. Their progressive rock sound mixed in with the violin playing of Ragsdale creates a unique sound unlike almost any other band. I'm sure their records are not easy to duplicate live on stage, but this band was more than up to the task. Their playing was impeccable and the sound they produced was extremely impressive. Ruth Eckerd Hall has always been known to have one of the best sound systems of any amphitheater around (in our area anyway) and the combination of its acoustics and Kansas' music was simply an incredible experience.
The six members of the band are virtuosos on their respective instruments. Tom Brislin's playing of two different keyboards (sometimes at the same time) and David Ragsdale's violin playing really stood out to me. However, in my opinion, the singing and front-man work of Ronnie Platt was just magnificent. His voice is just as good, if not better, than latter-day Steve Walsh's vocal cords and along with his enthusiastic energy as he bounded around the stage (when not playing yet another set of keyboards), was very contagious. Billy Greer held down the bottom on the bass and served as the show MC as he told a few stories and introduced most of the songs. Founding member Richard Williams does not move around much, but he plays a mean electric guitar and finger picks an incredible acoustic (sometimes both during the same song.) And I don't want to forget the other founding member, Phil Ehart, for keeping the driving beat on the drums.
If I am to nitpick (and I guess I am), the only complaint I could mention is that the show at an hour and a half was too short, especially for a band that is known for their two to three hour long shows from just the recent past.  However, a couple of people after the show pointed out to me that since their guitarist Rivzi quit just a month before the show that it may have been hard to rearrange a whole lot of songs to fit the roles he played in them. Even so, that is just a very minor complaint , because I certainly enjoyed this show even more than I had originally thought I would.
It's great to be out and hearing live music again, especially by some of our bigger names in the music world. Ruth Eckerd Hall has a lot of performances scheduled for the summer months ahead including the Mike Love version of the Beach Boys playing two shows next weekend. John Stamos is  joining the band for these shows, so this is certainly a must-see event (just slight sarcasm.)
If Kansas visits any of your readers areas this year I highly recommend to everybody to check them out.
Rich Turner
Palm Harbor, Florida
Here's the complete concert set list:
Point Of Know Return
What's On My Mind
Two Cents Worth
Icarus - Borne On The Wings Of Steel
Song For America
The Wall
(acoustic set)
People Of The South Wind
Hold On
Dust In The Wind
(back to rock)
Cold Grey Wind
Sparks Of The Tempest
Fight Fire With Fire
Portrait (He Knew)
Paradox
Miracles Out Of Nowhere
(encore)
Carry On Wayward Son
Rich also sent us a boatload of pictures from the show, and we're running every one of them below ... 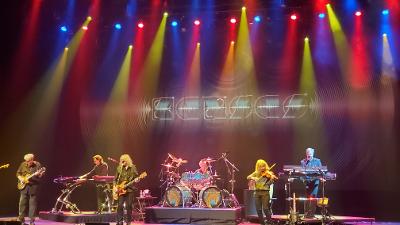 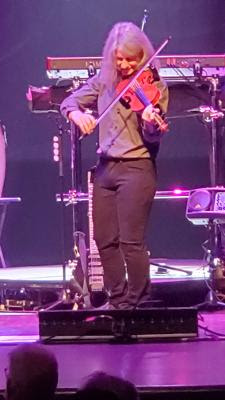 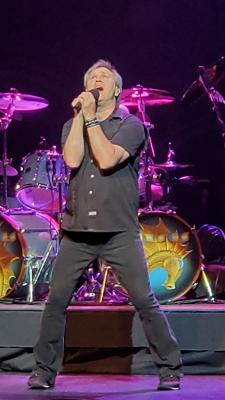 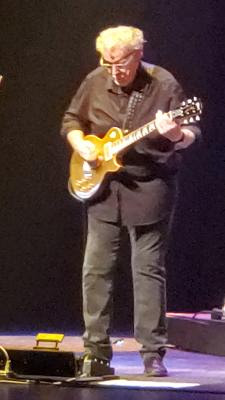 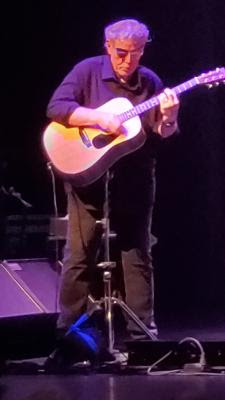 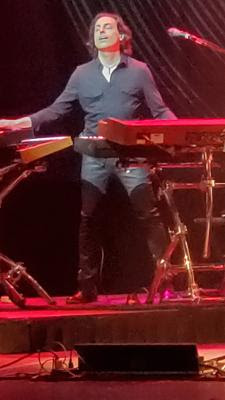 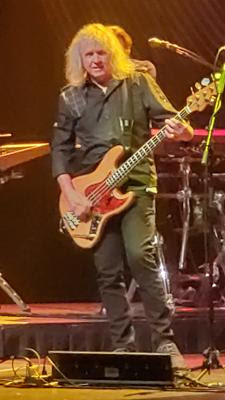 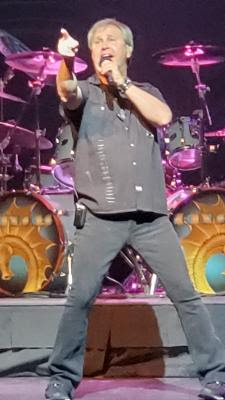 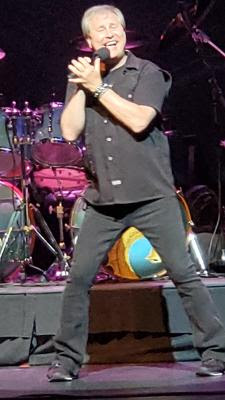 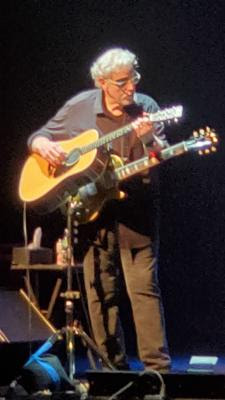 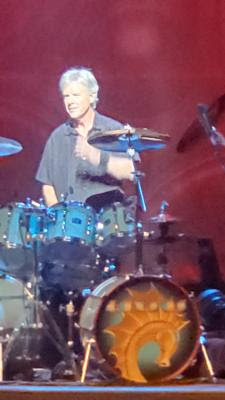 And, coincidentally, this show got some coverage in Ultimate Classic Rock this week ... including another RAVE review ... as well as some of the back story as to how difficult it was to rehearse for a major upcoming tour during Covid ...
https://ultimateclassicrock.com/kansas-first-post-covid-concert/?utm_source=Sailthru&utm_medium=email&utm_campaign=New%20Campaign&utm_term=UCR

Meanwhile, both of the two hot tours that we've been telling you about coming up this fall have just added more tour dates to their itineraries …

The Monkees now DO have a stop in Chicago (at The Rosemont Theater on November 5th) as well as added dates for Spokane, WA (where the tour is now scheduled to kick off on September 10th at The First Interstate Center For The Arts), TWO dates at The Dosey Doe / Big Barn in The Woodlands, TX (September 28th and 29th), a show at MGM Northfield Park in Northfield, OH on November 3rd and a new show added for The Star Theatre in Minneapolis, MN on November 7th.  I fully expect more dates will be added, including a second show at The Greek in L.A. … stay tuned for more details.

Meanwhile, Genesis has also added a couple more dates to their US stop.  Second shows have been added for Philadelphia on December 3rd and Boston, December 16th, which they say will now be the final stop.  They’re claiming this is it … and that no more dates will be added … but despite the RIDICULOUSLY high ticket prices, this is apparently a VERY hot ticket ... and a BIG money maker for the band ... so, as we've learned SO many times before, never say never!!!