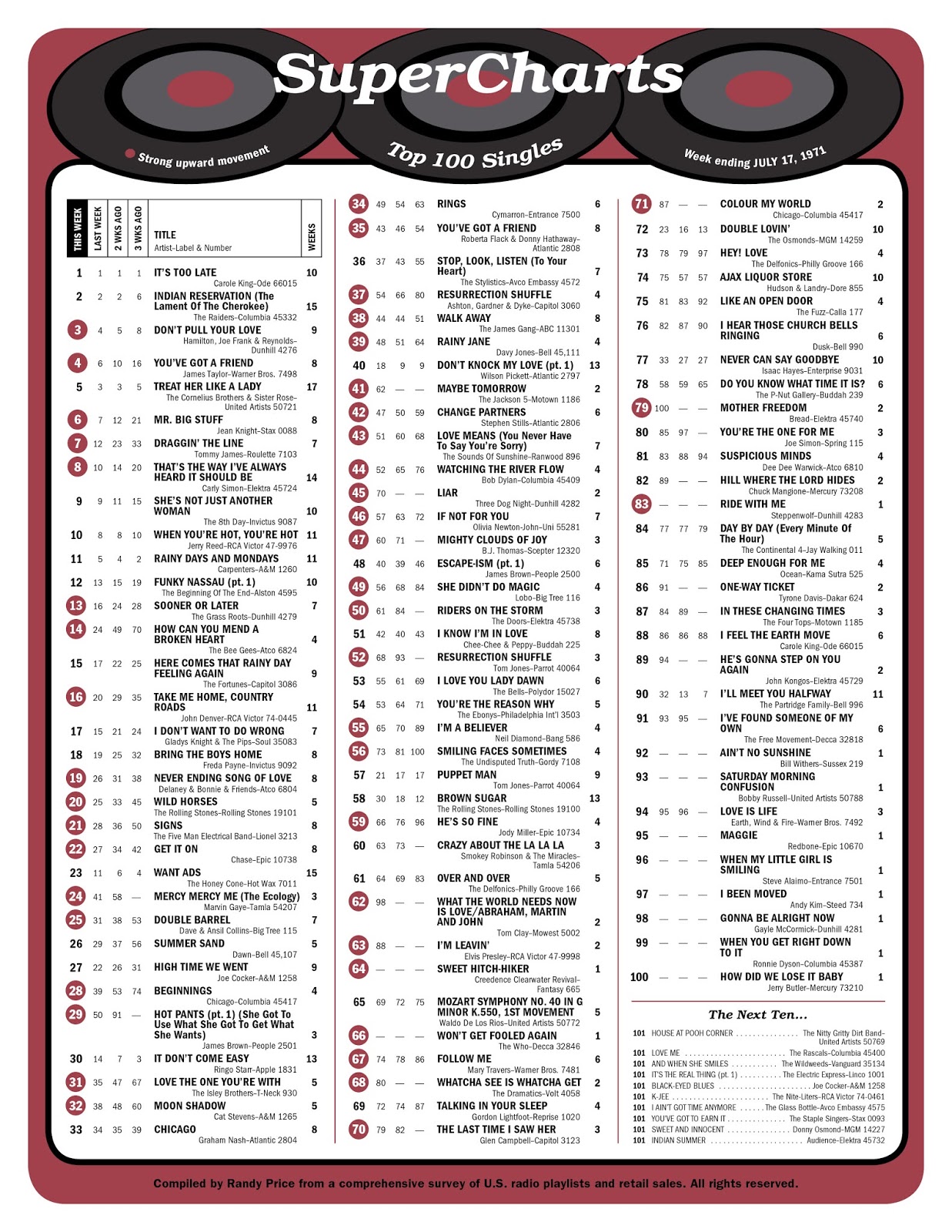 Carole King holds on to the top spot for a fourth week, becoming the FIFTH record this year to occupy the #1 position for four weeks or more.  (Considering that we've only had eleven #1 Records thus far in 1971 as of this week, that's a pretty impressive statistic.)

Offering up further proof that the charts have been a little bit boring this year is the fact that there is only ONE new record in The Top 11 this week ... the other ten have seen very little movement ... and six of THOSE have been there for at least the past four weeks!

New on the chart this week is "Sweet Hitch-Hiker" by Creedence Clearwater Revival, which premiers at #64.  Although I instantly bought EVERYTHING that CCR released, this was not one of their stronger singles.  The band would disband a year later.

An instant classic debuts at #66 as The Who's "Wont' Get Fooled Again" premiers on the chart this week.  Even some fifty years later, there isn't a day that goes by where we don't hear THIS one.

And although I can't REALLY consider it one of my favorites, I was intrigued by "Saturday Morning Confusion" by Bobby Russell, new at #93.  If nothing else, it certainly falls into the "Forgotten Hit" category.  (When's the last time you heard THIS one!!!)  Russell had already made his mark as a songwriter with hits like "Honey" and "Little Green Apples" and a couple of years later would top the chart with his wife Vicki Lawrence's version of "The Night The Lights Went Out In Georgia" ... but this time around, he was looking to cut his own hit record.

This Week In 1971:
July 12th – The New Seekers enter the recording studio to record what will be their next single, “I’d Like To Teach The World To Sing.”  The song was a reworking of a Coca-Cola television commercial they had recorded the year before … one of the most successful and memorable Coke ads ever.  (Thank you, Don Draper!!! Lol)

July 13th – Reggie Jackson’s towering home run hits a transformer on the roof of Tiger Stadium, allowing The American League to defeat The National Leage by a score of 6-4 in the 1971 Major League All Star Game.

July 17th – John Lennon and Yoko Ono appear on the BBC late night talk show Parkinson.  John uses the opportunity to take the British Media to task for “calling Yoko ugly” and “saying that she broke up The Beatles.”
Posted by Kent Kotal at 6:00 AM