(It's all I could do to get something ready in time to post today!  lol)

As so many of us are, Ultimate Classic Rock is taking a look back at 1971 (on its 50th Anniversary) to explore some of the many chances that occurred in rock music as well as culture.

Here is an example of a recent piece run on their website:

Reminder:  Me-TV-FM will salute The Class of ’71 this weekend as well, recapping the music and events from fifty years ago.

Just to show you (again) how much things have changed in the world of the pop music charts, Justin Bieber (with the premier of his latest single “Stay” on The Billboard Hot 100 Pop Singles Chart) this week becomes the youngest recording artist EVER to achieve 100 chart hits.  (It really is quite an amazing feat … in Joel Whitburn’s last book documenting every charted Billboard Pop Hit, Bieber had accumulated 61 thru September of 2017 … That means he’s earned another 39 more in the four years since.  (He also "bubbled under" another nine times thru September of '17.)

Now again, I SHOULD point out that it looks like exactly ONE of these 61 hits was actually released as a single … and that would be “Boyfriend,” which peaked at #2 in 2012.  All of the others charted as album tracks, thanks to downloads and YouTube views.  (Not like the old days … when you actually had to go out and BUY a record.)

Billboard is reporting that Bieber nabbed his 100th chart hit at the ripe old age of 27 years, four months and three weeks of age.  On the all-time list of artists who’ve had 100 or more chart hits, Elvis Presley remains the ONLY vintage act with 109. (And keep in mind that Elvis' first 32 chart hits no longer qualify since Billboard determined that the charts didn't really begin until August of 1958!  That's right, folks ... songs like "Heartbreak Hotel," "Blue Suede Shoes," "Don't Be Cruel," "Hound Dog," "Love Me Tender," "All Shook Up," "Teddy Bear," "Jailhouse Rock," "Don't," "Wear My Ring Around Your Neck" and "Hard Headed Woman" don't hold a candle to those much more significant timeless hits by the other big names on this list, all with proven long-standing legacy under their collective belts.  Once again, it just goes to show you how "flash in the pan" today's chart reporting really is.)

For example, the other leaders include:

Good to know that, thanks to Billboard’s new methodology of computing their chart information, Elvis will live on alongside all of these other MAJOR recording artists like Future, Chris Brown, Lil Wayne, Nicki Minaj and the Cast of Glee!  (That certainly puts things into perspective, doesn’t it???)  kk

They’re billing it as a “Greatest Hits Concert” … so we’ll be treated to the full gamut of both Beach Boys and solo material.  Pre-Sale tickets will be available beginning this morning at 10 am (Wednesday, July 21st) thru 10 pm tomorrow (Thursday, July 22nd) thru The Genesee Theatre online box office.  (The secret order code is GENESEE.)  Tickets will then go on sale to the general public on Friday, July 23rd, at 10 am.  (kk)

And Farm Aid, 2021, is on as a LIVE event again this year after being experienced “virtually” last year due to the pandemic.

The concert will take place at the Xfinity Theater in Hartford, CT, on Saturday, September 25th.  Tickets officially go on sale this Friday, July 23rd, at 10 a.m. ET.  (Prices range from $65 to $305 … and can be purchased here.)

Recently, the Murmaids’ record company, Chattahoochee, was mentioned.  Popsicles and Icicles is one of my favorite songs because it was one of the first 45's ever given to me.  My Uncle Ed ran a supper club in the '60's and he would give me the roached records from the jukebox.  The Murmaids’ record was a keeper because it wasn't badly burned.  I have never forgotten the pink colored label.

The late Terri Fischer-Siegel was my phone guest a couple of times. The last time was Valentine’s night, 2004, when she and sister Carol called in to report they were practicing with plans to sing for the public again.  I have included the only cut I could find on short notice.  More digging is required for additional soundbites.

During our salute to that WLS July 14th Chart that you ran, I was able to feature a few archived cuts from the Mauds, the Messengers, the Airplane and others.

Most of the '67 requests I received that night were for songs that came out during other parts of the year.  (Many listeners don't realize when we do a specific chart, we are just looking at songs that were on the charts that week.)  I still played all of the requests because you cannot go wrong during any part of 1967.

Perhaps later this year we can put together a list of our '71 favorites for an on-air countdown … maybe even run a Forgotten Hits Readers Poll to factor in some of their favorites into a Top 40 or Top 50 Countdown.  (Besides, it would be good to have your golden voice back on the air with us!)

I remember when we played back our 1967 favorites … we were all set to do it again last year with our 1970 faves … but it just got away from us … so maybe a 1971 Countdown would be in order.  (I’ll leave it up to the readers if they’d like to participate.  If so, I’ll start tallying the votes … and then add in some of my own!)

Man, talk about your vintage releases!  They really dug deep for this one … but how cool is THIS?!?! 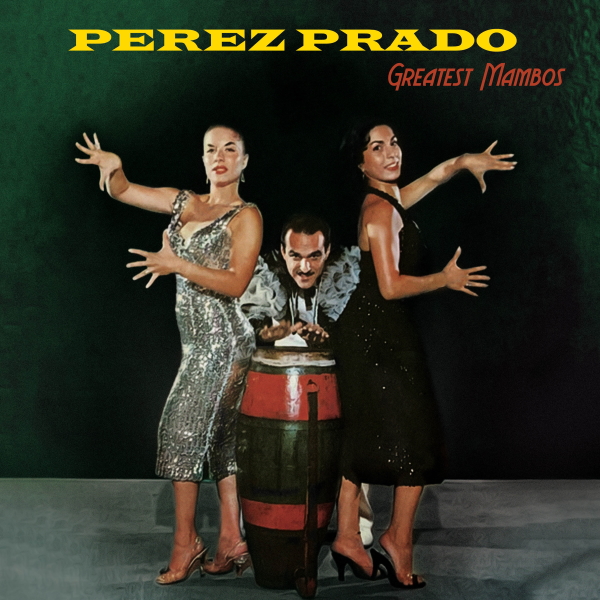 It’s been over 30 years since Latin music idol, Pérez Prado, has had a new vinyl on sale, but now with the recent upsurge in vinyl manufacturing and the exponentially increasing demand from music fans for more vinyl releases, Goldenlane Records is proud to announce a beautiful new collection from the King Of The Mambo! The collection is called Greatest Mambos and it includes some of Prado’s most remembered and best loved compositions including the worldwide phenomenon “Mambo No. 5,” which was later re-popularized in 1999 by artist Lou Bega, as well as such favorites as “Que Rico El Mambo,” “Mambo No. 8” and more! This limited-edition colored vinyl pressing (available in your choice of either RED or YELLOW) is housed in a gorgeous gatefold jacket and will definitely be dancing off the shelves pronto! 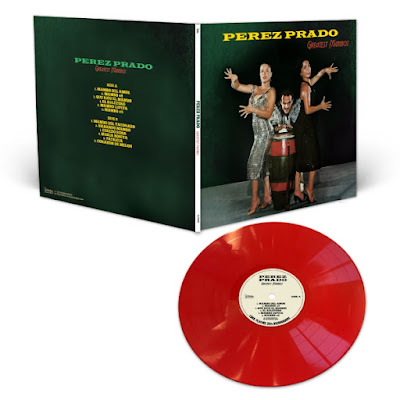 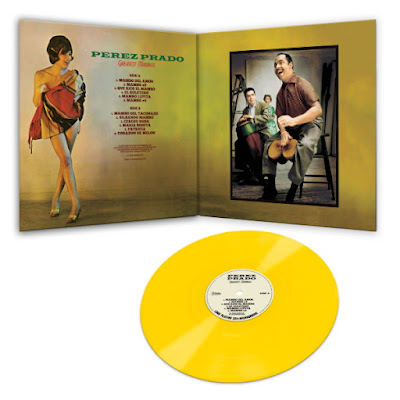 Prado was there at the launch of The Rock Era when his 1955 Hit “Chery Pink And Apple Blossom White” topped the Billboard Chart for ten weeks.  (It’s missing from this new release, which is kind of surprising in a way, in that it was his biggest pop hit … but the fact is, it really isn’t a Mambo in the traditional sense of these other tracks.)

“Patricia” followed in its footsteps to top the charts three years later … and IS included on this collection. (Prado had one other Top 20 Hit in 1958 … “Guaglione,” which peaked at #16 in Cash Box and #18 in Music Vendor … but only registered at #53 showing in Billboard.)

This is just a really cool looking package … which I’m guessing will make for a fun listen and conversation piece.  Ordering information is above.  (kk)

And from Mambo to Jimi Hendrix … just another day here in Forgotten Hits!  (lol) 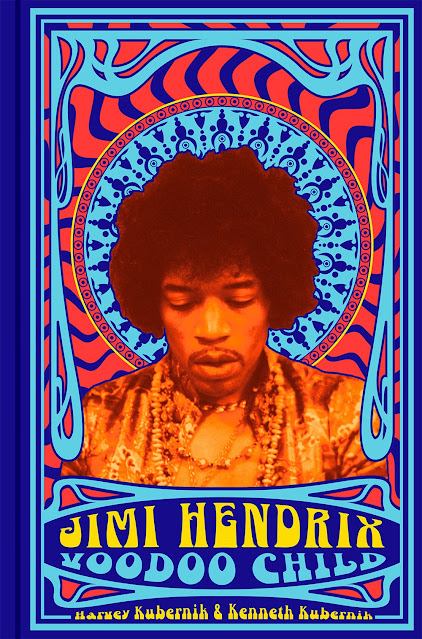 Harvey Kubernik’s brand new book, “Jimi Hendrix:  Voodoo Child” (written with his brother, Kenneth Kubernik) is all set to release on October 19th … and we can’t wait.  (This looks to be a really good one!  And, as you can see, the cover art is sensational!)

From the official press release put out by Sterling Publishing …

We are thrilled to be publishing Harvey and Kenneth Kubernik’s latest biography JIMI HENDRIX: VOODOO CHILD (9781454937388), scheduled to publish on October 19, 2021. This will be the most up-to-date illustrated biography of Hendrix's life and work on the market, and it focuses on his musicianship as told by the authentic voices from those who knew and worked with him. There are fascinating behind-the-scenes contributions from the scene makers and musicians of the time, including previously unpublished excerpts from interviews with the recording, producing, and engineering principals from throughout Hendrix’s career, with a focus on his music. Along with stunning photographs and memorabilia, Jimi Hendrix: Voodoo Child is the ultimate keepsake for Hendrix fans. The stunning artwork will set this book apart.

"Here is a Jimi Hendrix book that dares to do what the others don't: treat him like a human being. Instead of rehashing the usual claptrap folklore, Jimi Hendrix: Voodoo Child delivers a portrait of the actual 3D person like we've never seen before. From the deep exploration of his musical evolution to the cast of characters who knew him well to the vivid portrayal of the world he moved in, this is a book that lets you meet the real Jimi once and for all, and it's mindblowing. In these pages, Jimi fans will discover that truth is stranger, more beautiful, and more soulful than mythology." —Daniel Weizmann—music historian and journalist

You can preorder your copy now on Amazon.com …