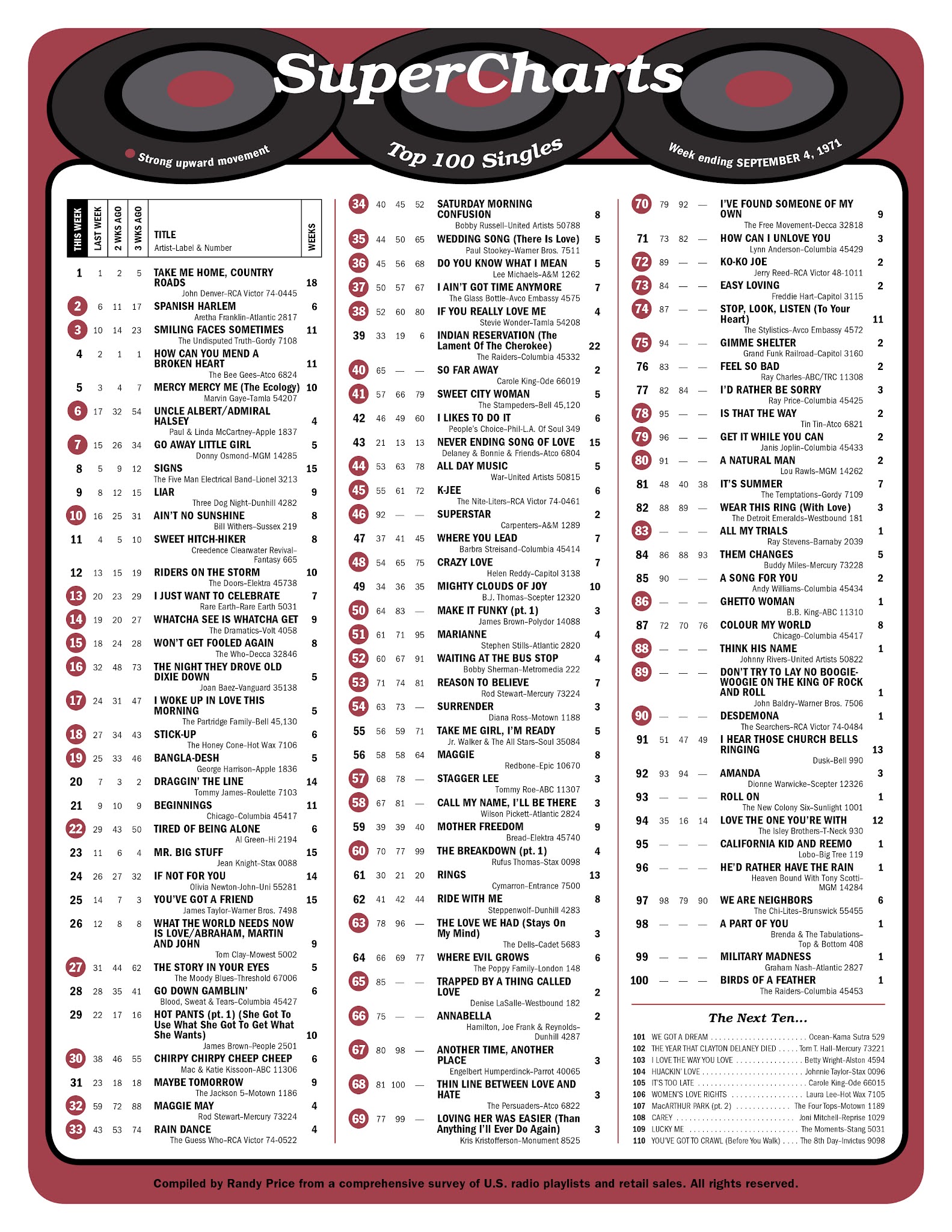 "The Night They Drove Ole Dixie Down" continues to make huge strides for Joan Baez ... it moves up another 16 places from #32 to #16.  And Rod Stewart's first big solo hit, "Maggie May," climbs 27 spots from #59 to #32.
(We've certainly been tracking the progress of THIS track in Forgotten Hits lately!)

Keep your eyes on "I Ain't Got Time Anymore," the Dickie Goodman-produced hit for The Glass Bottle, "If You Really Love Me" by Stevie Wonder, "So Far Away" by Carole King and "Sweet City Woman" (up 16 places) by The Stampeeders.

Once again, not a very big week in the way of new music.

The chart's highest debut is all the way down at #83 ... that's where "All My Trials" premiers for Ray Stevens.

The Long John Baldry version of "Don't Try To Lay No Boogie-Woogie On The King Of Rock And Roll" premiers at #89 ... that's been a Rock And Roll Roots favorite for years, even though Crow had the bigger hit (especially here  locally) the year before.

Chicago favorites The New Colony Six premier at #93 this week with their latest, "Roll On," a song that ABSOLUTELY should have been a much bigger national hit than it was.

And rounding out the very bottom of the chart is "Military Madness," a solo "hit" for Graham Nash and "Birds Of A Feather," the follow up hit to Paul Revere and the Raiders' #1 Smash, "Indian Reservation" ... which is STILL on the charts (for its 22nd consecutive week) at #39.

We just found yet another way to link these two Revolutionary Clothes-Wearing artists once again!  (kk)

September 2nd – The Grateful Dead track down their ex-manager, Lenny Hart, and have him arrested for embezzling $70,000 from the group.

September 4th – The New York Times reports that Sly Stone’s West Hollywood Landlord is suing him for three million dollars, complaining that his building has been inundated with “loud, nosiy, boisterous persons” … and wants Sly out.

Also on this date, am Alaska Airlines Boeing 727 crashes into the side of a mountain near Juneau, Alaska, killing all 111 people on board
Posted by Kent Kotal at 6:00 AM