Last summer we got into a bit of a conversation regarding The Grass Roots ... and learned ALL kinds of things about some of their recordings.
For example, we learned that Rob Grill, the vocalist we're all most familiar with (and the guy who STILL fronts the band today) was not on their very first single. "Where Were You When I Needed You" was released as The Grass Roots but featured its composer, P.F. Sloan singing the lead vocal. Once The Grass Roots officially "formed" ... with Rob Grill on-board, they redid the vocal on the record ... and that's about the ONLY version you're going to hear anymore today. We ALSO learned that Herman's Hermits were the FIRST act to record this song when they featured it on the soundtrack LP for their film "Hold On" ... and we even featured Peter Noone's vocal version at the time.

Another well-known Grass Roots Hit is "Midnight Confessions" ... which was first recorded by The Evergreen Blues Band. "The River Is Wide" (truly a GREAT Forgotten Hit) was first a semi-hit for The Forum ... and Marmalade (the group who scored here with "Reflections Of My Life" in 1970) had the big British hit with "Lovin' Things". On the other side of the coin, Rob Grill regularly tells his audience that The Grass Roots originally passed on the song "Don't Pull Your Love", which went on to become a HUGE Hit for Hamilton, Joe Frank and Reynolds.

But we've found that the song that has the most UNIQUE set of circumstances surrounding it has to be their first Top Ten Single, "Let's Live For Today".

Check out the story behind THIS song!!!
(NOTE: You MIGHT want to grab a scorecard first!)
***
The song that we all know today as "Let's Live For Today" was originally recorded in Italian by a group called The Rokes ... they released it as "Piangi Con Me" which, I guess, got a fair amount of airplay in Italy back in 1965.

Then a group called The Skope heard the song and attempted to do a literal English translation of the lyrics ... all of a sudden "Piangi Con Me" became "Be Mine Again". They released THAT as a single ... and it quickly proceeded to bomb.

Next, a New York group called The Living Daylights liked the melody enough to re-write the lyrics and, for the very first time, "Piangi Con Me" and "Be Mine Again" became "Let's Live For Today". Although The Living Daylights record got a little bit of airplay in New York City ... enough to make it a Top Ten Hit on the WOR Survey, it STILL wasn't a hit nationally, as most people outside the New York market never had a chance to hear the song. 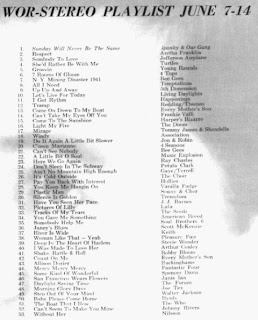 Incredibly, next The Rokes ... you remember The Rokes, right??? The Italian group who FIRST recorded this song as "Piangi Con Me"??? ... Well, after The Rokes heard that their song was getting played on the radio in The United States as "Let's Live For Today", THEY decided to record it again ... only in English this time ... and released THEIR version of "Let's Live For Today"!!! Unfortunately, this version bombed, too!

Then, in 1967, the song FINALLY made its way to California and into the hands of The Grass Roots, who recorded it ... in English ... using the "Let's Live For Today" lyrics ... and went on to have the first of their three Top Ten Hits. It's gone on to become both an oldies radio and classic rock staple. (Famed Chicagoland sportscaster even shared with us the fact that he lost his virginity to this tune!!! I know, I know ... WAY too much information!!!)

Way back in 1961 The Drifters recorded a song called "I Count The Tears" ... give a listen to THIS tune and see if the chorus doesn't sound just a little vaguely familiar.

According to Carl Wiser's Songfacts website (http://www.songfacts.com/), who interviewed Geoffrey J. Felder, son of legendary songwriter Doc Pomus (who WROTE "I Count The Tears" for The Drifters), his father never pursued any type of legal action against any of the parties involved with the various recorded versions of the song we all know and love as "Let's Live For Today". Here's what he had to say about it on the Songfacts site:

The "Sha-la-la" chorus is very similar to The Drifters' hit "I Count the Tears," which Pomus and Shuman wrote. Pomus was upset about the obvious similarity, and even though lawyers called him to suggest that he should sue, he did not. The main reason was because he was not that kind of person. If you were a thief and stole from him, as long as he could still support himself and his family (and no one was physically injured of course) he would let it go. He felt that you'd get what you deserved in the end. The other reason was that at the time the song was released he was under contract with Hill & Range (later to become Warner / Chappell) and they would have had the authority to sue and not him.

Oh yeah, one more thing ... as if all of this isn't already complicated enough, did you know that there are actually TWO sets of lyrics sung on The Grass Roots' hit version? A different vocal mixed was used for the mono and stereo versions ... because of this, one says "I need to feel you ..." "inside me" / "deep inside of me" and the OTHER one says "beside me"!!!

Listen for THIS incredible story when Scott Shannon does his next "Remakes Weekend" on The True Oldies Channel! Meanwhile, now you know the story behind the song!