On July 10th, 1964, I was just ten years old ... some seven weeks shy of my 11th birthday ... and had only recently discovered the joy of listening to our Chicagoland AM Radio Giant, WLS. (Although I'm sure I had been exposed to it here and there earlier, I can pinpoint to the exact week when I became hooked ... that was the week that I first heard afternoon deejay Dex Card count down The Silver Dollar Survey for the very first time ... and the two-sided hit Little Children / Bad To Me by Billy J. Kramer was #1 ... so that would have been just three weeks earlier.)

To some degree I guess I was an "early bloomer" when it came to pop music ... I had already become a MAJOR fan of The Beatles in February when I first saw them perform on The Ed Sullivan Show ... and already owned their singles I Want To Hold Your Hand / I Saw Her Standing There, She Loves You and Twist And Shout, as well as the "Meet The Beatles" album.

Living in Chicago as a ten year old, my entire musical world consisted of WLS and what I saw on TV on programs like The Ed Sullivan Show and, later, Shindig and Hullabaloo ... American Bandstand and The Lloyd Thaxton Show ... honestly, I couldn't get enough. I had never even heard of publications like "Billboard" or "Cash Box" ... nor did I even give a second thought to what music might be popular beyond the transistor radio in my own bedroom ... as far as I was concerned, if they didn't play it on WLS, it simply wasn't important!!!

I didn't have a lot of spending money as a kid ... but I knew that I had to pick up that Billy J. Kramer record ... not only did I love "Little Children" but what an incredible bonus to be able to get "Bad To Me" on the flipside of the same record!!! (Why on earth would The Beatles give THAT song away?!?!?)

Other Silver Dollar Survey entries that caught my ear that week in June included another Lennon - McCartney tune, "A World Without Love" by Peter And Gordon (WLS also played the much-weaker Bobby Rydell version of this tune!), "Chapel Of Love" by The Dixie Cups, "Do You Love Me" and "Can't You See That She's Mine" by The Dave Clark Five, "Don't Let The Sun Catch You Crying" by Gerry and the Pacemakers, "Hickory, Dick And Doc" by Bobby Vee, "Father Sebastian" by The Ramblers and "Beans In My Ears" by The Serendipity Singers, which I also heard quite often on MOM's radio station, WIND.

The brand new WLS Survey dated July 10, 1964, shows The Beach Boys at #1 with "I Get Around", the aforementioned "Can't You See That She's Mine" by The DC5 at #2 and "Rag Doll" by The Four Seasons at #3. (My Billy J. Kramer single, "Little Children", had already slipped down to the #4 spot that week on the WLS chart.) In at #5 was the Johnny Rivers version of "Memphis". (Being new to radio, HIS was the first version of this song that I ever heard ... I wouldn't discover the genius of Chuck Berry till many years later!)

Certainly I had been exposed to the music of The Beach Boys and The Four Seasons prior to this particular week ... I'd seen them on TV and liked a few of their songs ... let's face it, they were already chart veterans by 1964 ... but there was something about THESE two songs that made me a fan of their music for life ... "I Get Around" and "Rag Doll" had a certain feel about them that to this day generate an excitement in me unlike many others. (In hindsight, I suppose The British Invasion made some of our American Groups rise to the challenge ... I still believe these songs to be amongst the strongest that The Beach Boys and The Four Seasons ever released.)

Looking over the rest of the chart, I didn't quite get "The Girl From Ipanema" (in at #6 for Stan Getz and Astrud Gilberto), although I LOVE this song today ... but I was completely bowled over by recent chart entries like "Little Old Lady From Pasadena" by Jan and Dean,"Don't Throw Your Love Away" by The Searchers, "She's The One" by The Chartbusters and, premiering at #30 that week, the brand new Beatles' single A Hard Day's Night / I Should Have Known Better, a two-sided winner for sure! (The following week it would jump all the way to #8!!!) I honestly couldn't decide which side of the single I liked better ... and played them both virtually non-stop for weeks. (I also TOTALLY dug the picture sleeve, which I quickly hung up on my wall!) And, again ... because I was SO new to radio ... I thought Del Shannon's version of "Handy Man" ...brand new on the charts at #33 that week ... was the bomb ... never realizing that this song had already been a hit for Jimmy Jones a few years earlier. 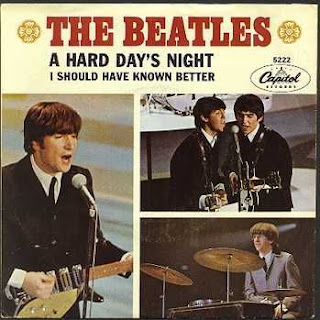 A couple of Forgotten Hits worthy of a spin today:

She's The One by The Chartbusters

Don't Throw Your Love Away by The Searchers