re: BOB GREENE:
Hi Kent,
I love the book Be True to Your School. I've read it 6 or 7 times. It just totally pulls me back to the 60's. I've recommended it so much to others that My Wife's eyes glaze over if I start to talk about it.
Bill
I'm thoroughly enjoying it, too. It's a fast and easy read, done "diary" style (which also makes for all kinds of GREAT stopping points!!! lol) It's just amazing to me the number of parallels we all experienced growing up regardless of where in the country that may have been. We shared SO many of the same thoughts and feelings and memories and reactions ... it's almost scary sometimes. Bob raises a good point, too, in that when you listened to the radio back then and a popular song from the day came on, you just knew that EVERYBODY else in town was listening to that SAME song and sharing that SAME experience with you. Back when there were only three TV channels, we ALL watched The Ed Sullivan Show together with our parents ... as a family ... because that's just what you did ... you didn't go off into your room and watch something on the other set because odds are there wasn't a second set ... you didn't go "pop a movie in" because that technology didn't exist yet. There are elements of our society ... including family bonds ... that were never stronger simply because of the "simplicity" of that time. You just knew that Sunday Nights at 7:00 you were going to sit down and see who Ed had on his show this week ... and then at 8:00 you were going to flip it over to "Bonanza" ... period!!! THAT was the way of life ... THAT was the Sunday ritual ... in homes ALL across America. Now you can't get four family members to agree on ANY single program so you end up watching three different TVs in three different rooms and, for the most part, live three separate lives. I think I kinda miss those simpler times ... because along with that bond came a sense and standard of family values that are sorely missing today. (kk)

Speaking of "Be True To Your School", I feel like I might have missed my calling by reading this book so long after it was originally published ... I think I could have come up with a GREAT advertising campaign:

He loved the exciting new music of The Beatles and the whole British Invasion and wanted to grow his hair long and learn to play the guitar ...

And he wanted to become a newspaper journalist.

By summer's end, he would achieve all three of his goals!!!

Kent ...
I wrote to Bob Greene to tell him I liked his book. He wrote back. Thought you might like to know, he has a new book coming out. I already ordered it.
Buonge
Yes, there's a "sneak peek" of the first couple of chapters in the back of the paperback edition ... looks interesting (and with Greene's newspaper background, should be spot on.) I love this quote at the beginning from Philip Meyer, Knight Chair in Journalism, from a speech and slide show he gave at The Media Center at The American Press Institute in March of 2005, regarding the declining readership of newspapers: "The next slide shows something even more alarming, which is the decline in readership. This is from a general social survey, and the question is 'How often do you read a newspaper?' As to the percent who read every day, that's been declining an average of about one percentage point a year, and shows no sign of stopping. You extend that line with a straightedge, you find that the last daily newspaper reader disappears around 2040 ... in April." lol How true, how true. MOST folks get their news online these days ... who's got the time to sit down and read through a whole newspaper? I know I used to enjoy it when I had a long commute to work and took the train ... and, invariably, if I'm out eating lunch somewhere or at the airport and someone has left a newspaper behind, I will pick it up and start reading it every single time ... but I personally haven't BOUGHT a newspaper in at least a decade ... unless there was a specific story I wanted more details about. (The Sox winning the World Series a few years back ... Michael Jackson's death last week ... that sort of thing.) Greene's an EXCELLENT writer and has ALWAYS captured the spirit of "the average man" in his columns ... his books make for enjoyable reading (I'm on my third one in a row right now!!! lol) And he seems to be just as genuine as can be. He's told me a number of times now how much he appreciates our waving the flag in his honor here in Forgotten Hits and I'm happy to do it when a book is this good. (I think he's already heard from dozens of our readers regarding their enjoyment of this book ... and I firmly believe that EVERY music fan out there will enjoy "When We Get To Surf City" ... it's just that simple.) And it's become a bit of a "Mutual Admiration Society", too ... Bob religiously reads Forgotten Hits and is AMAZED at the knowledgeable people we've assembled on the list ... so many music experts in one place ... and the fact that the LOVE of this music come through in each and every column. Coming from someone whose work I've appreciated and admired for so many years, that's high praise indeed. (kk)

By the way, you'll find the winners of the two autographed copies of Bob Greene's book, "When We Get To Surf City", at the bottom of today's Forgotten Hits Page. Congratulations to our winners ... and thanks again to Bob Greene for donating these for our FH Give-Away!!!

re: AND SPEAKING OF SURF MUSIC ... :
The Summer edition of Endless Summer Quarterly is now available. The edition is the ultimate Summer Days (And Summer Nights!!) companion piece by Craig Slowinski with previously unpublished pictures from the Summer Days (And Summer Nights!!) photo shoot; Rasmus Skotte filmatic view of the Smile music and its various meanings; news and reviews.
For more information, visit the ESQ website.
David Beard

Howdy, Kent ...
Did I ever send you this story? Feel free to share it with your readers! :)
Fred
I remember reading this a while back ... but here's a link to the story as it appeared on our buddy Phil Miglioratti's "Pray For Surf" Website ... check this out ... and all of the OTHER cool stuff he's got posted there!!! (kk)
Click here: Pray For Surf: Fred Vail: The Backstory on Jan & Dean's Command Performance

re: THE VENTURES:
Hi Kent,

Sad to hear about Bob Bogle of The Ventures. Some of my earliest recordingsessions were with The Ventures and Mel Taylor's solo albums. More at myblog if you are interested. Here's the link:

re: THE RIP CHORDS:
Hey Kent ...
Here's an ad for the new CD.
You are a great support to our band and we really appreciate it.
Your friend ...
Mitch 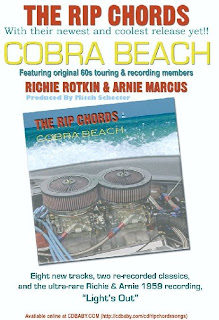 And, we just got word about an upcoming Rip Chords show that we wanted to pass along to our readers: 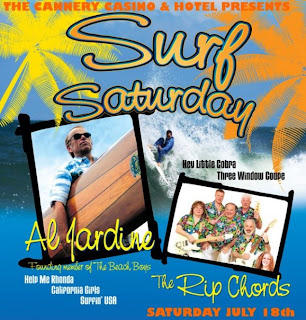 re: OUR LATEST FORGOTTEN HITS WINNERS:
Our congratulations go out to the latest Forgotten Hits Give-Away Winners ... Les Peterson of Fort Collins, Colorado, and Randy Price of New York City, NY, will both be receiving autographed copies of the EXCELLENT Bob Greene Book "When We Get To Surf City", now available in paperback. And, as an extra bonus, I'm sending an UNautographed copy of the book to Barry Blitch of Titusville, FL, too, since we have an extra copy sent to us by the publisher. Congratulations to ALL of our latest Forgotten Hits Winners!!! Stay tuned because MORE prizes are on their way!!! (kk)

Thank you very much!

Hi Kent,
This will be great. Thanks a lot! I love Jan and Dean so this will be very interesting. Attached are photos of a couple of Jan and Dean rarities from my collection. (I realize Jan didn't actually participate on Save For a Rainy Day but he is credited just the same.)
Thanks again, and please thank Bob Greene for me too! Have a great afternoon!
Sincerely,
Les Peterson 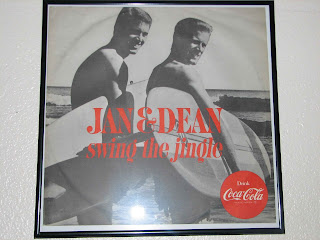 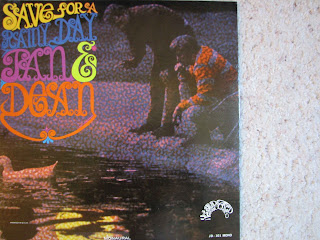