re: HEAVEN SENT:
It all started here:

Hi Kent,
Hope you, and yours, are well. "Early In The Morning", from last send, tweaked my unconscious. (I recall that tune from radio, or perhaps even the shampoo commercial that was mentioned. Was GREAT to flash-back to.) Here's a loooong-shot. There was as a "fragrance", I assume aimed at the 12-18 female demographic, named "Heaven Sent" - possibly "Heaven Scent". This was circa 1966-1970?, Chicago market, heavy saturation. There was a rather catchy song they labeled that product with, and played it again, and again, and yet ... again. On those late night drives one takes with that new girl ... who makes one's heart beat faster than the rest, the ambient melodies create the sountrack ... smile. The lyrics go something like: "Suddenly, there's a heavenly fragrance that clings ... it's heaven scent. Suddenly you're an "imp" (imp?) wearing angel's wings ... in heaven scent ... Suddenly you are all of the things that you want to be, a little bit naughty but heavenly ... in heaven sent ... etc." Can you imagine the angst those lyrics would create in the 16 year-old female heart? Angel / naughty? I digress ... I have so many memories tied to that commercial, and people I've kept connected to. Years ago I tried calling radio stations, and even searched the net. I'd do anything to get my hands on that. Might anyone out there in FH-land has ANY clue If, and HOW, I might be able to get my hands on that commercial? Thought fishing in "FH" pool might get a lead?
Thanks ever-so ...
Ron 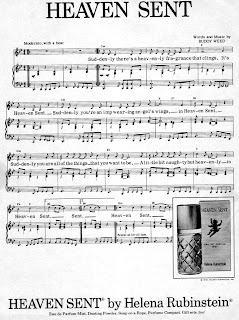 Kent and Ron, As for your "wanted" "Heaven Scent" commercial, I think EVERY person that listened to WLS back in the period you mention will recognize this GREAT jingle instantly. Like you, I was entranced by how cool it was, the idea, not just the tune -- AND the over saturation of airplay it got! I loved it and have been trying to get a clean tape or record of it ever since without luck. Attached is the only version I have from AM radio. It sounds like the Chiffons to me, but the version I remember best was mostly a solo voice, possibly double tracked, singing it just a bit more sexy than this cleaner sounding (But STILL GROOVY!) version. Hey, how cool was this jingle? It was so good that the company put the SHEET MUSIC to it in their trade ads!! Buddy Weed composed it. Kent, can you find Buddy for us? Haha. So there you have it! Another great classic from Kent's FH members! Enjoy and by all means, SING ALONG while I play it on the piano in "Moderato, with a beat" (see sheet music)!!! WLSClark

Kent - It is Heaven Sent not Heaven Scent cologne one reader was alluding to and it can be purchased on the Net at the manufacturer or even via K-Mart. I'm tempted to buy a bottle, just to refresh my memory on the smell because I wore it all the time. Also, I do remember the commercial, just don't remember the exact lyrics or melody. Keep up the good work. Sue Patterson

A good number of us thought Heaven "Scent" made sense (since it was, after all, a perfume fragrance) but it seems you are correct. We found ALL kinds of listings for this on eBay ... and it is apparently still in production to this day! (Who knew???) Now what they REALLY ought to do is revive the old jingle, pay Forgotten Hits BOATLOADS of money for stirring up an interest again and get rolling with a killer, kick-ass ad campaign. (Hmm ... I wonder if I can interest "Mad Men" in taking this on?!?!?) kk

And it really hasn't stopped since!!! Your comments and memories just keep on comin'!!! (We love it!!!)

Again, you are amazin!
Sue
Just wait!!! Check out the emails and soundclips below. (Now even our 13 year old daughter is walking around the house singing the Heaven Sent commercial!!! lol) Who would have EVER thought that the mention of this long-forgotten commercial would stir up so many memories?!?!? (kk)

Hi Kent,
Nice to see the buzz around the old Heaven Sent jingle. Did you know there was another version of the song -- with different lyrics -- that aired in 1972? I've attached that one (recorded off WQAM that year), along with the earlier, better-known Heaven Sent jingle.
Jeff Lemlich
http://www.limestonerecords.com

It truly is amazing the buzz this little long-forgotten jingle has caused! (Maybe NOT so long-forgotten after all!!! Catchy enough that our 13 year old has been singing it around the house lately!!! lol) kk

IT WAS PRETTY COOL HEARING THE HEAVEN SENT JINGLE AGAIN. THEY SHOULD HAVE RECORDED A LONGER VERSION, IT PROBABLY WOULD HAVE BROKE THE CHARTS!!
MICHAEL G. BUSH
Since we just recently covered "She Lets Her Hair Down" (later used as a Clairol commercial) and "Wear Your Love Like Heaven" (mentioned again below, used in yet ANOTHER hair commercial) ... and our instrumental countdown acknowledged such well known commercial / pop hit faire as "Music To Watch Girls By" (Diet Pepsi), "The Dis-Advantages Of You" (Benson and Hedges 100's) and "No Matter What Shape Your Stomach's In" (Alka Seltzer) it almost seems like a no-brainer in hindsight that somebody should have taken advantage of the obvious appeal of THIS tune!!! (kk)

Hi, Kent -
I noticed in yesterday’s blog that Ron was looking for a copy of Heaven Sent. It took a bit of searching through my collection to find it, but here’s the original Heaven Sent jingle. There were a number of variations recorded over the years, but this is considered to be the classic version. Listen and enjoy!
BTW, thanks for straightening me out on the spelling. Until yesterday, I assumed it was “Heaven Scent.”
Rob Frankel
Citadel Media

Who would have EVER thought that this little jingle would have been THIS fondly remembered?!?!? AMAZING!!! (kk)

Click here: heaven sent fragrance, great deals on Health Beauty, Collectibles on eBay!
(I guess they're still making this stuff ... but seriously ... what would the vintage, 40+ year old perfume currently selling on eBay smell like today?!?!?) 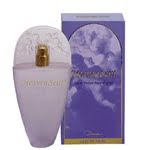 Hi, Kent.
Some really great stuff on the Forgotten Hits site right now, like that "Heaven Sent" clip. I remember that very well from WLS and wonder why the song apparently was never expanded into a single. The lyrics certainly captured the essence of my girlfriend at the time!
Have a wonderful Christmas.
Gary Theroux

I think the song was Donovan's "Wear Your Love Like Heaven." I can remember the song very clearly.
Carrie
Nope .. but that was another one ... in fact, scroll back on the web page to December 2nd (when we first explored the Clairol "She Lets Her Hair Down" commercial tie-in) and you'll see that we featured this one, too, a GREAT over-looked Donovan tune from 1967 (that I just happened to hear Jeff James play on Y103.9 the very next day!!!) kk

Like I keep saying, you just NEVER know which topic is going to catch on next here!!! Hope you enjoyed our little tribute to Heaven Sent. (Now where'd I leave my bottle of Hai Karate?!?!?) kk