LOTS of leftovers again this week ... so we'll do our best to get through them all between today and tomorrow ... kicking off first with a little bit of This and That!

re:  THIS AND THAT:
Here's some pretty powerful stuff, written by Kenny Vance (and sent in by FH Reader Frank B) ... you may remember that Kenny's home was destroyed by Hurricane Sandy ... and he lost ALL of his treasured memorabilia.  Very, very sad ... but MUST reading.  (kk)
Click here: Opinion: Rock musician: I'll never forget the sight - CNN.com

Barry Gibb speaks out about performing solo without his brothers in this interesting article / interview sent in by FH Reader Tom Cuddy ...  http://www.dailymail.co.uk/tvshowbiz/article-2356426/Barry-Gibb-tells-guilt-remorse-loneliness-the-Bee-Gees.html


This appearance on The Hollywood Palace was vital to the Rolling Stones' success. To use the language of pro wrestlers, it "put 'em over the top."


Appearing on the Dean Martin show, Deano clearly disses the Stones and their music. What Martin really did was tell kids all over America, "You have got to love this band because your parents hate them."
Stones magnanimous moments ... in no particular order:


Feel free to listen to and ‘plug ‘ our show!
http://thisweekinrock.podbean.com/
All the best!
Al Kohout
Executive Producer
Alkaye Media Group


I read it a few years ago and stumbled upon it again this morning while looking for Girl Group Info.
It's a pretty detailed article on The Shangri-Las and looks to be done with a lot of attention to accuracy.
You don't see a lot of info on these groups and The Shangri-Las make for good reading IMO., given the folks they worked with.
http://www.redbirdent.com/slas1.htm
Bill


John Mellencamp 1978 – 2012, a uniquely comprehensive boxed set collection covering the legendary singer/songwriter’s principal studio albums, will be released by Universal Music Enterprises on December 10. Pre-orders now at www.amazon.com ensure holiday delivery. The collection consists of a total of 19 CDs originally released over a recording career that spans 35 years.
John Mellencamp 1978- 2012, for the first time, combines in one package, albums Mellencamp recorded as John Cougar, John Cougar Mellencamp and John Mellencamp for Polygram, Universal, Sony and Concord-affiliated labels. The set contains a total of 223 tracks and includes such mythic album titles as American Fool, Lonesome Jubilee, Scarecrow, Cuttin’ Heads and the more recent Life, Death Love and Freedom and No Better Than This. Thirteen of the albums in the collection were RIAA®-certified as Gold, Platinum or Multiplatinum winners while ten of the albums achieved Top Ten status on Billboard’s Top 100 Album Chart.  Of special note is the fact that the collection includes the long out-of-print original soundtrack album to Falling From Grace, the Mellencamp-directed film that was a collaboration with noted author Larry McMurty. That disc includes tracks by Mellencamp, Dwight Yoakam, Nanci Griffith, Joe Ely, James McMurtry and John Prine.
John Mellencamp 1978- 2012 includes every one of Mellencamp’s thirty Billboard Top 100 singles, from “I Need A Lover” and “Jack & Diane” to “Pink Houses” and “Rain On The Scarecrow,” as well as such classics as “Paper in Fire,” “Hurts So Good,” “Crumblin’ Down,” “Jackie Brown,” “Small Town,” “Wild Night,” “R.O.C.K In The U.S.A.,” “Our Country” and, quite literally, all the rest.  There are bonus tracks concluding twelve of the albums, sourced from the 2005 re-mastered versions of Mellencamp’s Mercury releases.  Mellencamp, who continues to reside in his native Indiana, has been especially active of late.  Ghost Brothers of Darkland County, his collaboration with bestselling author Stephen King and musical director T Bone Burnett, has manifested itself as a touring theatrical entity with dates throughout the Midwest this fall.  An accomplished painter, Mellencamp has had numerous gallery exhibitions of his work; the latest, his first museum exhibition, is set to open next month at the Butler Institute of American Art in Youngstown, Ohio.
In recent years Mellencamp was the recipient of Billboard’s Century Award, the Woody Guthrie Award, The ASCAP Foundation’s Champion Award, The John Steinbeck Award as well as induction into the Rock and Roll Hall of Fame. This past week it was announced that John Mellencamp is a candidate for induction into the Songwriters Hall of Fame.  Mellencamp holds the record for the most tracks (7) by a solo artist to hit the top position on Billboard’s Hot Mainstream Rock Tracks Chart, all of which are, of course, included in John Mellencamp 1978 – 2012.
Never content to rest on his many laurels, Mellencamp has been writing new songs for an album he plans to record early this coming year, once more with T Bone Burnett slated to produce.

>>>Kent, I have a question that I hope one of your many readers may help with.  It may be too "pop" - oriented and not "rock 'n' roll" - oriented enough for Forgotten Hits and, if so, fine ... just thought I'd ask. In the late spring / early summer of 1965, an instrumental called "A Walk in the Black Forest" by German jazz pianist Horst Jankowski made it to No. 12 on the Billboard pop chart.  I have since noticed that this same tune -- no question, it's the identical melody -- appeared on at least three episodes of  the "Perry Mason" TV show as background music.  (They are "The Case of  the Missing Melody" from September 1961; "The Case of the Absent Artist" from  March 1962, and "The Case of the Potted Planter" from May 1963.)
So -- how / why did this tune show up on "Perry Mason" long before it was a hit here?  Was Jankowski shopping the tune around for years?  Did  someone from the show hear the melody and buy the rights?  Was it a hit in  Europe before it was a hit here? I have checked the Horst Jankowski fan website (yes, there is one!), but this question doesn't seem to be addressed  there.  Thanks!


>>>Hi Henry!  Yes, I'm VERY familiar with Horst Jankowski's recording ... had the 45 at the time and have featured it as part of Forgotten Hits a few times over the years.  (It recently made our "All-Time Favorite Instrumentals" List and we also included it in our very special "Walk ... Don't Run" Marathon Weekend a couple of weeks ago!)  In fact, I seem to remember even running photographs of the original sheet music for this tune for some reason or another!  But I was NOT aware of any Perry Mason tie-in, so let's put this one to the list and see what they come up with.  "A Walk In The Black Forest" was a #3 Hit in Great Britain ... but that was in 1965, too ... so that doesn't seem to be the reason.  Anybody else out there got any ideas?  (kk)
The funny thing is, I found these comments for the same reason Henry McNulty made them. I saw a rerun of Perry Mason (hooray for MeTv!) from 1961 that featured the tune I know so well as "A Walk in the Black Forest." The thing is, I also had heard the same tune -- it's unmistakable, as you know -- in a Twilight Zone episode called "Cavender Is Coming" from September, 1962. (The episode starred Carol Burnett but is otherwise pretty awful.) I saw the TZ episode before I saw the PM show and wondered even then how this song, supposedly from 1965, ended up in a show from three years earlier. The PM episode reminded me of that question, and a Google search brought me to you.
Did you ever get any more information on this? I've searched and haven't found anything. I guess the only possible explanation is that Jankowski wrote it -- he does seem to have been the composer, not just the guy who made it famous -- several years before the song became a hit. As Henry said, he must have shopped it around for a while, and the tune is so catchy, it got picked up here and there until it finally caught on in '65.
I'm pretty sure the versions from TZ and PM are not the same as the one that became a hit and have no idea if they were Jankowski himself playing.
Just a trivial bit of music trivia, but I thought you might be interested. Sorry for the long e-mail!
And by the way, it's great to see that you appreciate the easy listening instrumentals from the 60s. I was born in 1957, so songs like "A Walk in the Black Forest," "Walk, Don't Run," "Cast Your Fate to the Wind" and the entire output of Herb Alpert and the Tijuana Brass were the background music to my childhood.
Keep up the good work!
Steve from Pennsylvania


Kent -
I have all the Perry Mason episodes on DVD and taped them from WTBS in Atlanta back in the 1980's  This song showed up in a few episodes.  I had seen Horst's name in the international section of Billboard a number of times previously to 1965 when the song was a hit.  Apparently for whatever reason the song became a hit at that time, but Jankowski was a very well known musician in Europe in the late 1950's and early 1960's    I have a couple of sources to try to find out the root of this, but, I am guessing that this song WAS shopped to various TV shows for a number of years.

The best source of this would be anyone associated with the Perry Mason TV show (who have all probably passed away by now) and anyone in the higher up level of Mercury Records during 1964-1965 who would know where it came from.  As with the Perry Mason show, most of those people have probably passed away. Finally, Billboard and Cashbox 1964-1965 may have some info in the international area (when I have some time, I can research that!

Kent,
Here's a cool survey I ran across while working on another project.  This one caught my eye when I saw "The Haunted House" ad and decided it might tie in with FH Halloween.  WOKY had many of the Chicago greats like Bob Hale, Ron Riley, Clark Weber, Barney Pip, Jim Stagg grace their airwaves in the 60's.  39 years ago this week at Halloween, 1974, WLS/CFL vet Art Roberts had moved on from WLS and was early afternoon DJ at WOKY in Milwaukee.  Art was a great friend to those of us who knew him and those who heard him nightly on WLS.
What a great time for the "request line" (ad on survey) to be hot for Art like the old days at WLS with his 10 PM countdown!  Some of my fave songs from 1974 are here including some FH members!!
This may be the only station who charted the last NC6 record, "I Don't Really Want to Go"!!!  I LOVE this 45 and I'm glad that WOKY played it, reaching #24 here!  There's also FH member Henry Gross with a fave of mine, "Meet Me On the Corner" checkin' in at 27!  There's Alan O'Day's "Angie baby" at 22.  Other faves of mine at 6, 7, 15 and my #1 fave of 70's, "Overnight Sensation" as a "Fragile:  These Records will Break"  extra!!  Haha.  Cool station, cool DJs, cool times!
Clark Besch 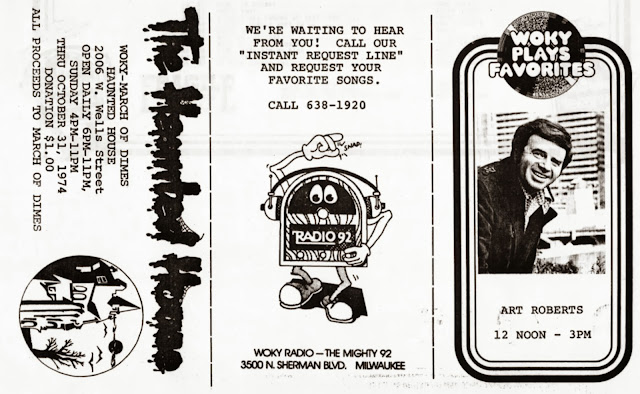 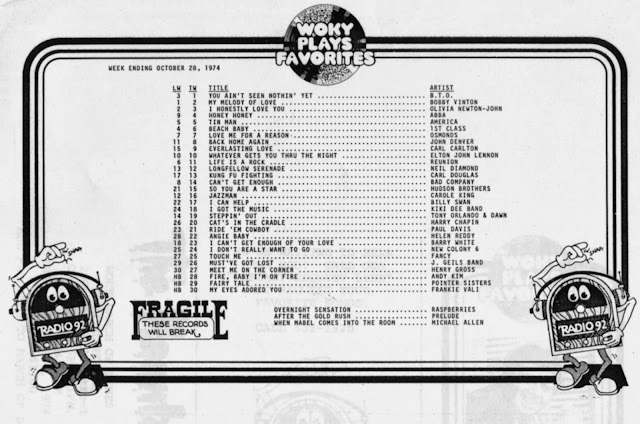 Kent;
If you're still wondering WHAT was thrown off that Tallahatchie Bridge, it was most likely an engagement ring.  Or maybe he just bungie jumped it ... of course most of us whish our politicians would take a leap off a bridge, too.
Robert Black

Outta time ... so we'll leave you with a couple of funnies ...
re:  THERE GOES THE NEIGHBORHOOD: 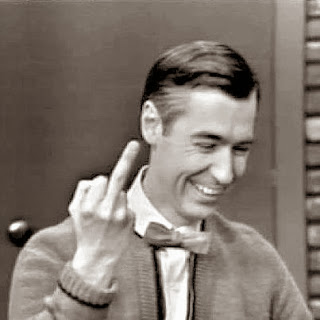 And this from Fred Glickstein of The Flock ... 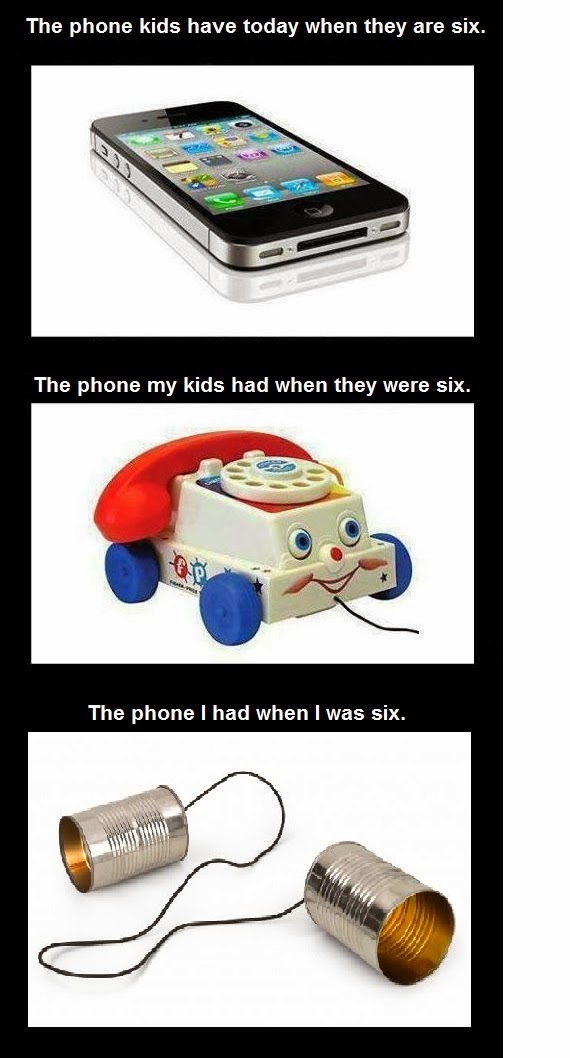