Artist / writer / producer / studio owner and Nashville’s “go to” guy for benefits, Buzz Cason, put this show together as a fundraiser for 2nd Chance 4 Pets. Chris Lucky, morning air personality at media sponsor Hippie Radio 94.5, emceed the event. The show was preceded by a “meet and greet” for sponsors and premium ticket holders. It actually turned out to be a “meet, greet and eat” since they served food and had an open bar! I arrived for the soundchecks, which began about noon.


The Franklin Theater is a fully restored 1930’s movie house with a capacity of about 300.  It has a magnificent sound system and there is not a bad seat in the house.  A concert there is truly an upscale experience.


All of the artists who performed live in the Nashville area. Pat Upton, of the Spiral Starecase, was also scheduled to perform but couldn’t make the drive from his home in Alabama because of storms and tornado warnings. Nashvillian Mark Volman of the Turtles did not perform, but attended and donated some memorabilia to the silent auction.


In the interest of brevity, I’ll say upfront that EVERY artist did a great job and the Sons of the Beach, who backed most of the artists on the show, made the songs sound just like the records. Each artist was well received,  even though I suspect many in the sold out audience were there to support the cause and not necessarily familiar with the music.


The Sons of the Beach opened with leader Steve Jarrell performing “Walking The Dog”, an appropriate start for at pet benefit.  Vicky Carrico, of the Beachettes followed with “Think”.  The Sons of the Beach is largely composed of Nashville studio vets who, as Chris Lucky pointed out, “have played on more hits than the sum of tonight’s performers”.


Dickey Lee was the first legend on the bill and he performed “Patches” and “I Saw Linda Yesterday” accompanying himself on the left handed guitar in addition to the band. I never get tired of seeing him perform those songs.  I asked him to sign a poster for the event, saying “Dickey, I hate to bother you … " ... he cut me off and said (smiling) “Ed, you have been bothering me for fifty years”. Not much of an exaggeration.


Buzz Cason followed singing the hit recorded as Garry Miles “Look For A Star”. He was then joined by Richard Williams, who with Buzz was a member of Nashville’s first rock and roll group, The Casuals – which later backed Brenda Lee on her live shows. They performed the Casuals’ local hit “My Love Song For You” which Buzz and Richard wrote and recorded in 1957.


Billy Swan then sang “Lover Please”, which he wrote and became a hit for Clyde McPhatter, followed by his own million seller “I Can Help”. Although Billy is proficient at many instruments, he chose to just do the singing tonight.


Bucky Wilkin (Ronny of Ronny and the Daytonas) was next up. Backing him on vocals were Ted Hillary, Steve Jarrell and Buzz Cason who have constituted the Daytonas when Bucky has played most recently. Bucky played his signature lick on “Little GTO” on an acoustic guitar and he received the first standing ovation of the evening. He followed with “Sandy”, with Buzz doing the harmonies as he did on the original recording.


Dallas Frazier next performed his song “Alley Oop”, a 1960 hit for The Hollywood Argyles (and for Dante and the Evergreens on some mostly east coast stations).  He closed with his 1966 single “Elvira”, better known from the Oak Ridge Boys’ multi-million selling version. It’s always special to me to hear songs interpreted by the person who wrote them.


Jimmy Gilmer then performed his number one hit “Sugar Shack” followed by his later hit “Bottle of Wine”. He added a verse to the latter which was written by the songs’ composer Tom Paxton, but not recorded on the Fireballs’ version. I told Jimmy he was having too much fun on stage.


Bruce Channel sang “Stand Up”, his song that was a 1985 country hit for Mel McDaniel, but still a good fit with the rock and roll songs of the night. Before finishing his set, he told the audience that Delbert McClinton, who played harmonica on Bruce’s biggest hit, was recovering from triple bypass surgery so could not join him this evening.  That song, “Hey Baby” received the second standing ovation of the evening.


There was a ten minute intermission.


Henry Gross resumed the show with a version of “Blue Moon” reminiscent of his days with Sha Na Na. It was not the song he did at soundcheck, but that didn’t matter because instead of using the band, he was accompanied only by his own guitar and by bass player Mike Chapman, who I recognized from his playing with Garth Brooks.  The instrumentation seems to have worked well for him, because Henry’s performance of his 1976 hit “Shannon” brought the crowd to their feet for another standing ovation. Of course the pet loving crowed could have also been swayed by Henry’s introduction, where he explained the song was inspired by his and friend Beach Boy Carl Wilson’s dogs, who were coincidentally both named Shannon (a story detailed in Forgotten Hits). He also mentioned that it had been named “best dog song of all time” by some organization.


Chris Lucky then reminded the audience that Henry had performed at Woodstock (as a member of Sha Na Na) and introduced the other act on the bill that had performed at that festival, Melanie.


Melanie, accompanied by her son Beau Schekeryk, performed “What Have They Done to My Song, Ma” with verses in German and French and interrupted by short comments. No, this was not “just like the record”, but kept the crowd thoroughly entertained and in the palm of her hand and won her a standing ovation.  She then performed “Brand New Key” with the same audience response. Melanie then asked permission to do a third song – all previous acts had only performed two. She apparently got approval and sang “Candles In The Rain”, into which she now incorporates “Give Peace a Chance”.  Yet another standing ovation for “The Queen of Woodstock”.


Garry Talley, lead guitar for The Box Tops, then performed their hits “Cry Like A Baby” and ‘The Letter” with the Sons of the Beach. Afterwards I overheard some of the other artists saying that they were surprised that without Alex Chilton, these songs could sound so much like the records.


Robert Knight followed with his hit “Everlasting Love” backed by, in addition to the Sons of the Beach, the song’s writers Mac Gayden and Buzz Cason  - who had backed Robert on the original recording session. Robert is so smooth; he’s one of the acts the other acts come out in the wings to watch.


Clifford Curry, billed as “The King of Beach Music”, closed the show, as he has closed every show where I’ve seen him perform. I don’t care how many hits you have had, you don’t want to follow Clifford Curry on stage. If you have never seen him, he was an inspiration for the band in the movie Animal House and can work a crowd like no other artist that I have ever seen. He performed his hit, “She Shot A Hole In My Soul”, with the song’s co-writer Mac Gayden remaining on stage to play, as he did on the original record. He then went into “Louie Louie” and by then everyone in the house was out of their seats and dancing. The other artists on the bill joined Clifford on stage as he went into an extended version of “Shout” as the show’s finale. I don’t think I will ever forget Clifford Curry with Melanie beside him as they and  the entire cast of the show sang “Shout”.


Behind the scenes stuff: right before the show, Henry Gross picked up a guitar that was hanging on the wall of the green room and he and Bucky Wilkin lead all of us who were there in several Beach Boys songs. Henry said “that’ll get you warmed up”.


And a good time was had by all, but especially me.


Questions, comments and corrections are welcome. 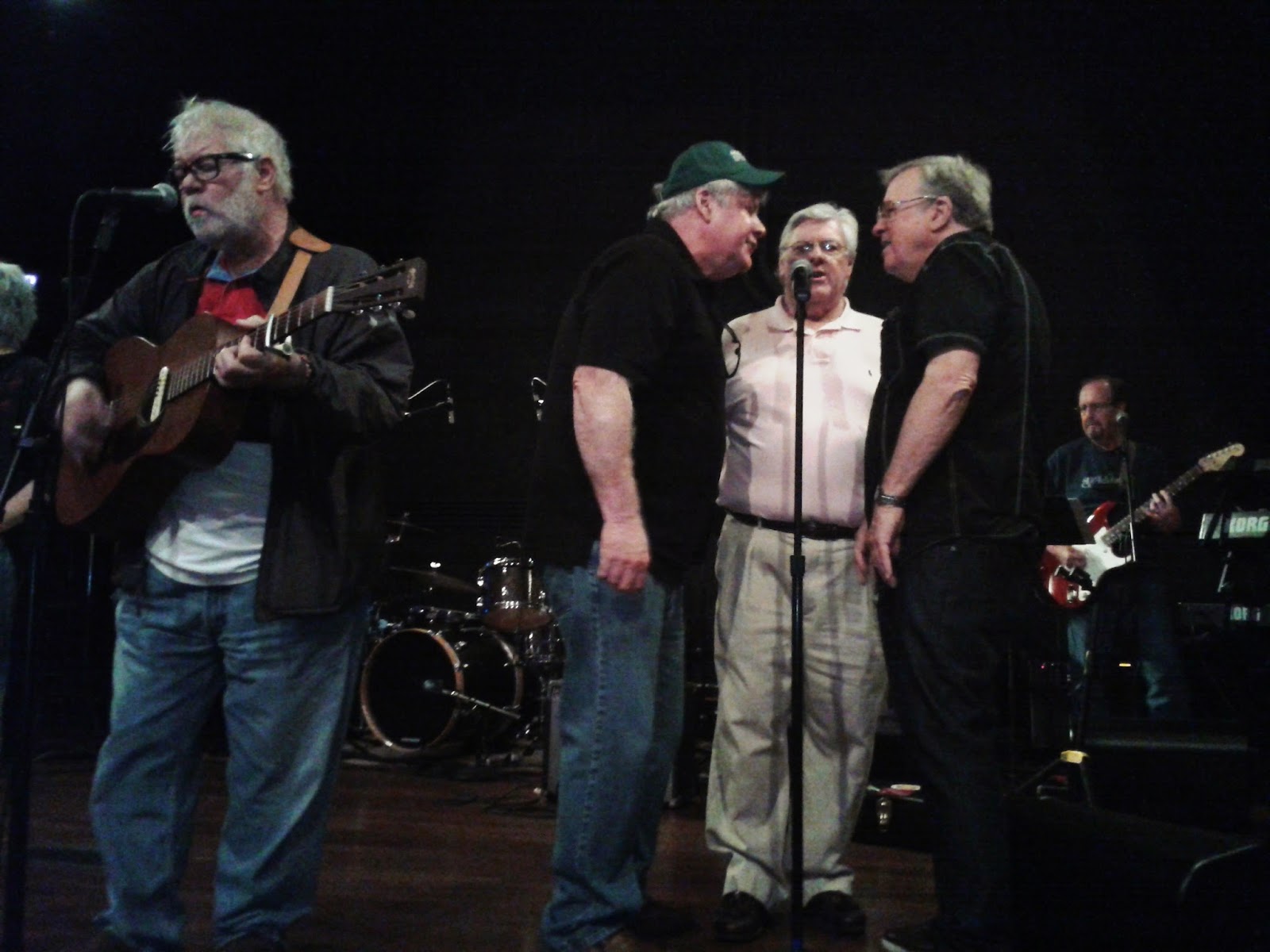 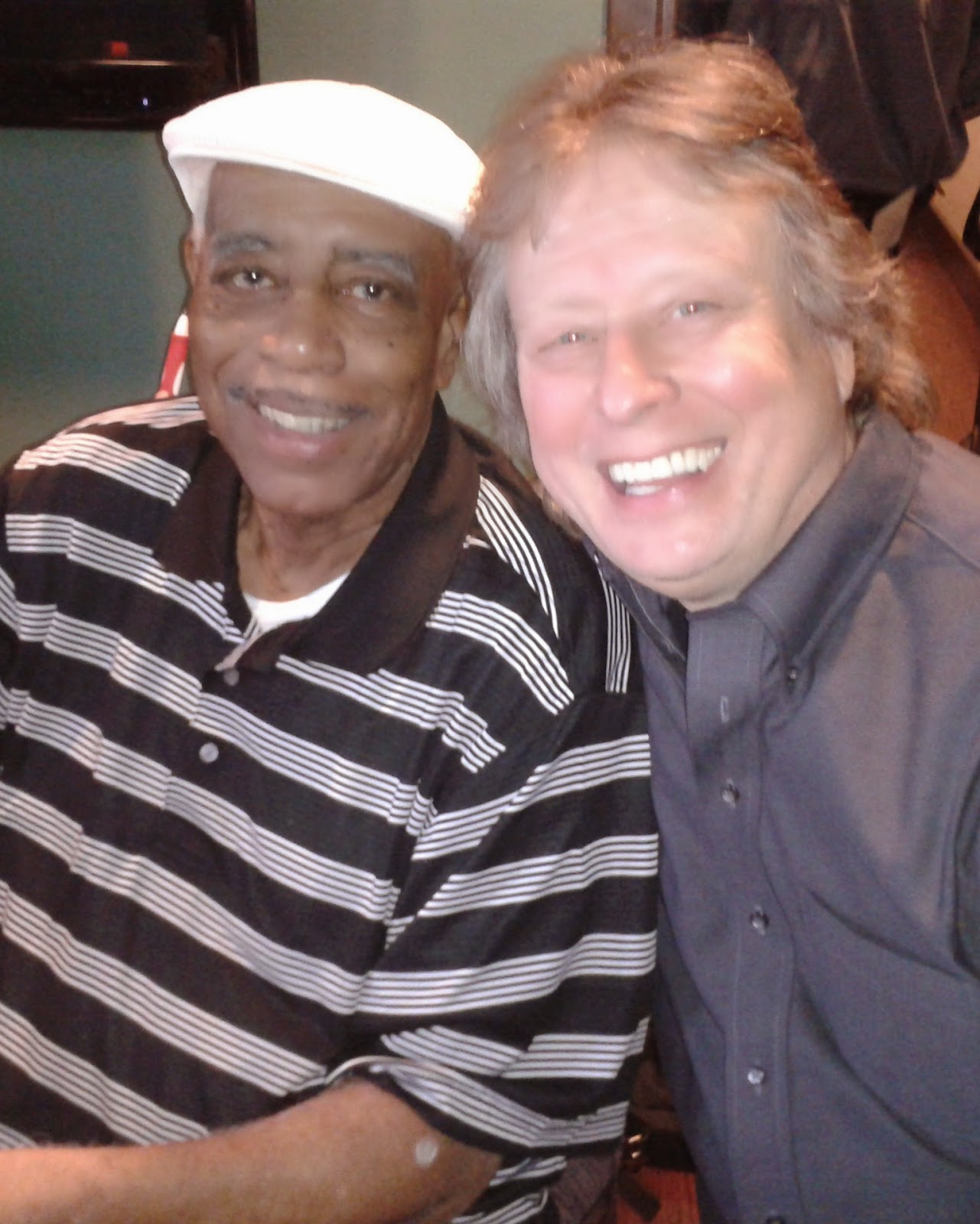 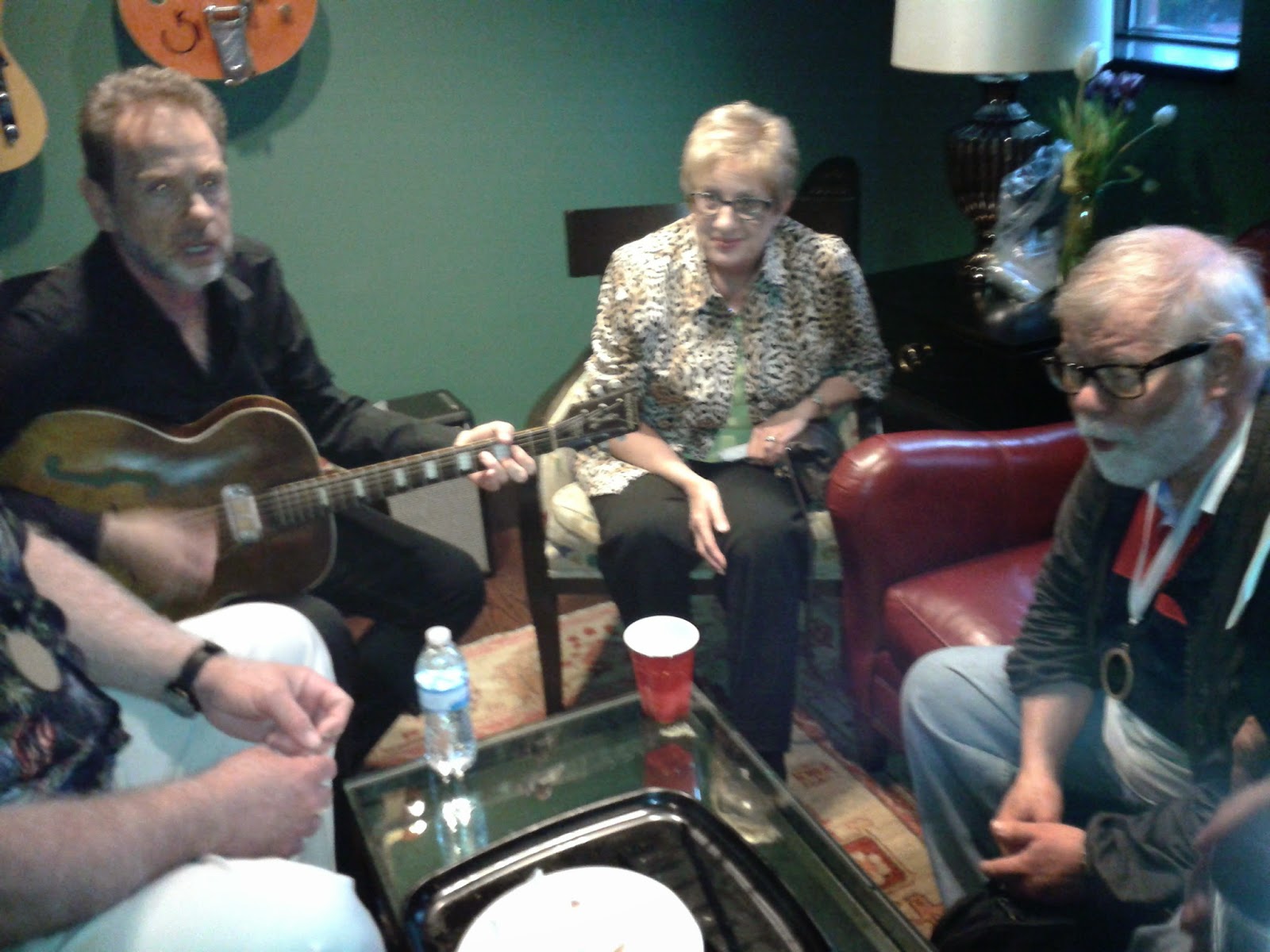 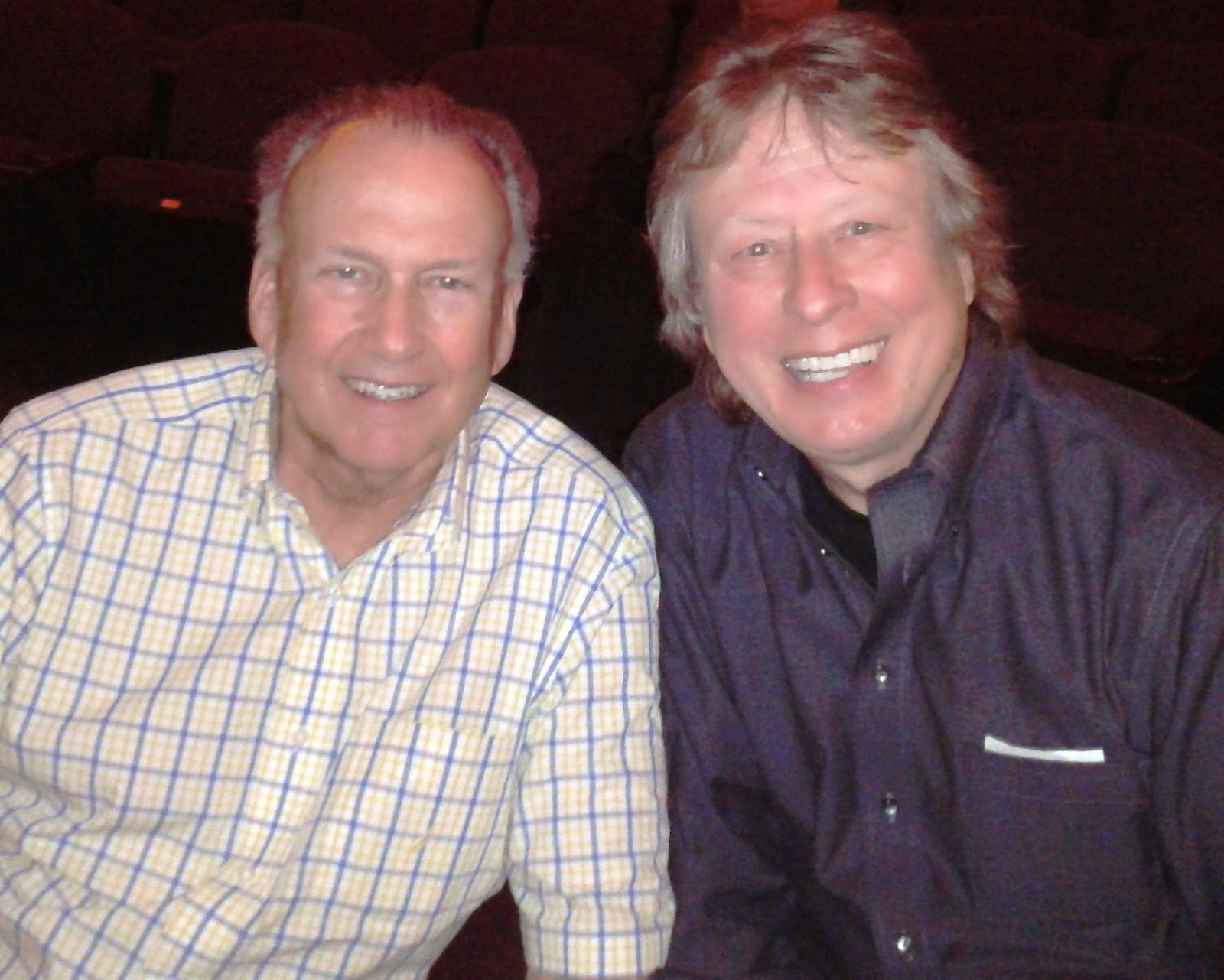 What does Mark Volman do when his Turtles are not leading
the Happy Together tour? Go to another oldies show!
Here's Mark backstage with Robert Knight. 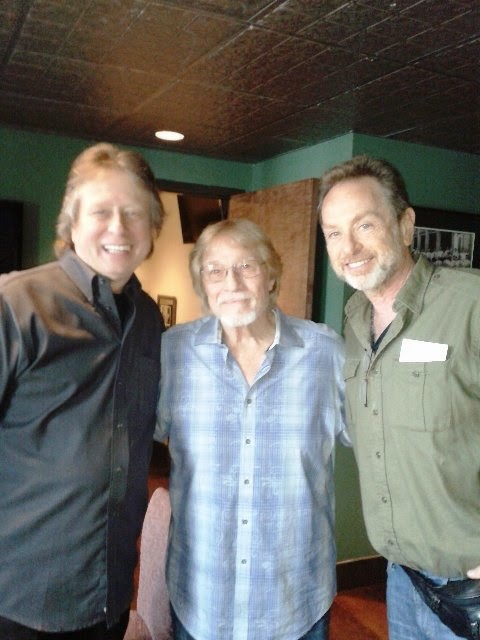 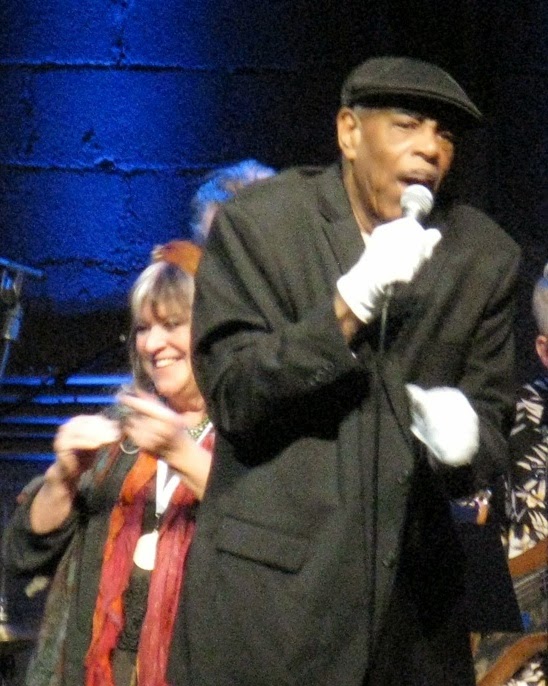 The finale: the "King of Beach Music" Clifford Curry
leading the cast and audience in "Shout" with Melanie by his side.
This photo taken by my friend Ron Halman and sent with his permission for use in Forgotten Hits. (Ed Salamon)