I love Mohegan Sun, and I don't gamble.  I love The Wolf Den, and I don't like to stand in line waiting for seats.  I had reserved seats in The Wolf Den to see Lou Christie perform on September 1st, so I had enjoyed a fun seven hours playing, shopping and dining with friends before entering the concert floor to find my seat.  I stopped to say HI to the Lightning Strikes staff, and received such a warm welcome with concerns on whether my seats were good.  I was also told the show would be an hour in length, and Lou would be performing songs I had not heard in concert before.

Great!  I am psyched!  I ... wait a minute!  Songs I have not heard?  What songs?  I changed purses upstairs in my hotel room.  I have no pen and paper in this purse to take notes.  I thought I knew it all and didn't need them.  I am a teacher without a pen and paper???!!!  But, I thought it was RECESS!  OK, borrow a pen ... unfold the ads for liquor on two tables and write on the backs.  I'm ready.  Thank goodness, because BOY DID I NEED TO TAKE NOTES!

I am extremely nervous about this review as I am aware there are people here ready to jump on me about song titles.  So what I have done is taken the titles directly from the Lou Christie webpage, when available.  What I could not find, I will admit to not knowing the exact wording and throw some lyrics out to you.  I do not see the song titles as an issue, but if you do, that is fine with me.  What I DO find important is that this concert was the best I have seen Lou do.  He was enthusiastic, personable, funny, and talented in all his presentation.  He was backed by great musical talents in voice and instrument, and so ... without further ado, I present Lou Christie in The Wolf Den.

When Lou shares the stage with other acts, he begins with 'I'm Gonna Make You Mine' and converts most of his number one hits into one medley.  Not so tonight.  The first song is 'I Still Wanna Rock & Roll With You'.  Very fitting and strong and immediately followed by the tender 'Love Is A Many Splenderd Thing'.  Nice way to switch it up.

Now we go into full length versions of some number ones:  'The Gypsy Cried' from 1962, the dirty lyric version of 'Rhapsody In The Rain', 'Hold Me, Thrill Me, Kiss Me', 'Two Faces Have I' and 'Beyond The Blue Horizon'.  'Two Faces Have I' featured instrumental solos from Al Korosy on lead guitar, John Hughes on bass, Dennis DiBrizzi on keyboards and Ron Wilson (also musical director) on drums.  These were not two measure solos.  They show-cased each of these performers.  Lou also brought the Hell's Kitchen Horns with him, so this was a powerful stage show.

Time to slow down and get dreamy with a rendition of 'The Things We Did Last Summer I'll Remember All Winter Long' which segued into 'The Theme From A Summer Place'.  Excellent choices for an end of summer weekend, don't you think?

Now we hit my OH-OH section.  Two songs sandwiched around a Roy Orbison fave of mine with titles I could not securely track down.  Get ready to jump in some of you!

The first one had lyrics that included, "One kiss and baby I knew" and "You picked me from a love tree".  The one after Orbison's had "moving down the boulevard" in it.  HOWEVER, in between was the killer song:  'It's Over'!  This song appears on a couple of Lou's cds, but I had never heard him perform it live.  It was his own take and arrangement on Roy's melody and lyrics; using dramatic voice and body inflections.  I must interject here that Lou talked about Roy saying that he was one of those people you liked BETTER at the end of a tour together than you even had at the beginning.  Isn't that rare?  Roy Orbison MUST have been a remarkable person as I have never heard a negative story connected with him.

The final two songs were 'I'm Gonna Make You Mine' featuring his female vocalists, The Crayons:  Mary Fox and Maria Roldan and 'Lightning Strikes'.  OR 'Lightnin' Strikes' OR 'Lightnun' Strikes' (I found all three on Lou's site ... so there!).  The former song has always been my favorite, but on Labor Day, the kicks, punches and energy level of all that was Lightning was unsurpassed.  Was there an encore?  Yes, about the "power of love" and "let's talk about it" so the title is inconsequential (to me).  Although it is important that we know what types of songs one can expect from an artist, I get caught up in the magic, and without notes am many times without song titles.  For the record (and in case you wish to hire them) the Hell's Kitchen Horns are Kevin Presutti, Chris Rinaman, Marty Bound, and Larry Puentes.

Thanks to Kathy and Linda, I was invited backstage afterward, and after winding down the stairs into the depths of The Den, had a few seconds (and time for a quick picture) to tell Lou how much we appreciated the concert and this time he gave us after.  I heard someone ask him if he ever considered going into acting on stage.  Credible question, but with Lou shaking his head 'no', I remember that entertaining totally with music is not the same as entertaining with someone else's written script even if it includes music.

Here's an awesome shot of Lou on stage ... 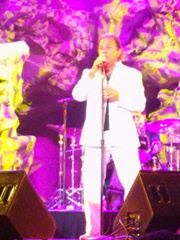 And here's the pic of Lou and me.  If you know which one is Lou, then you should be able to find me. ;-) 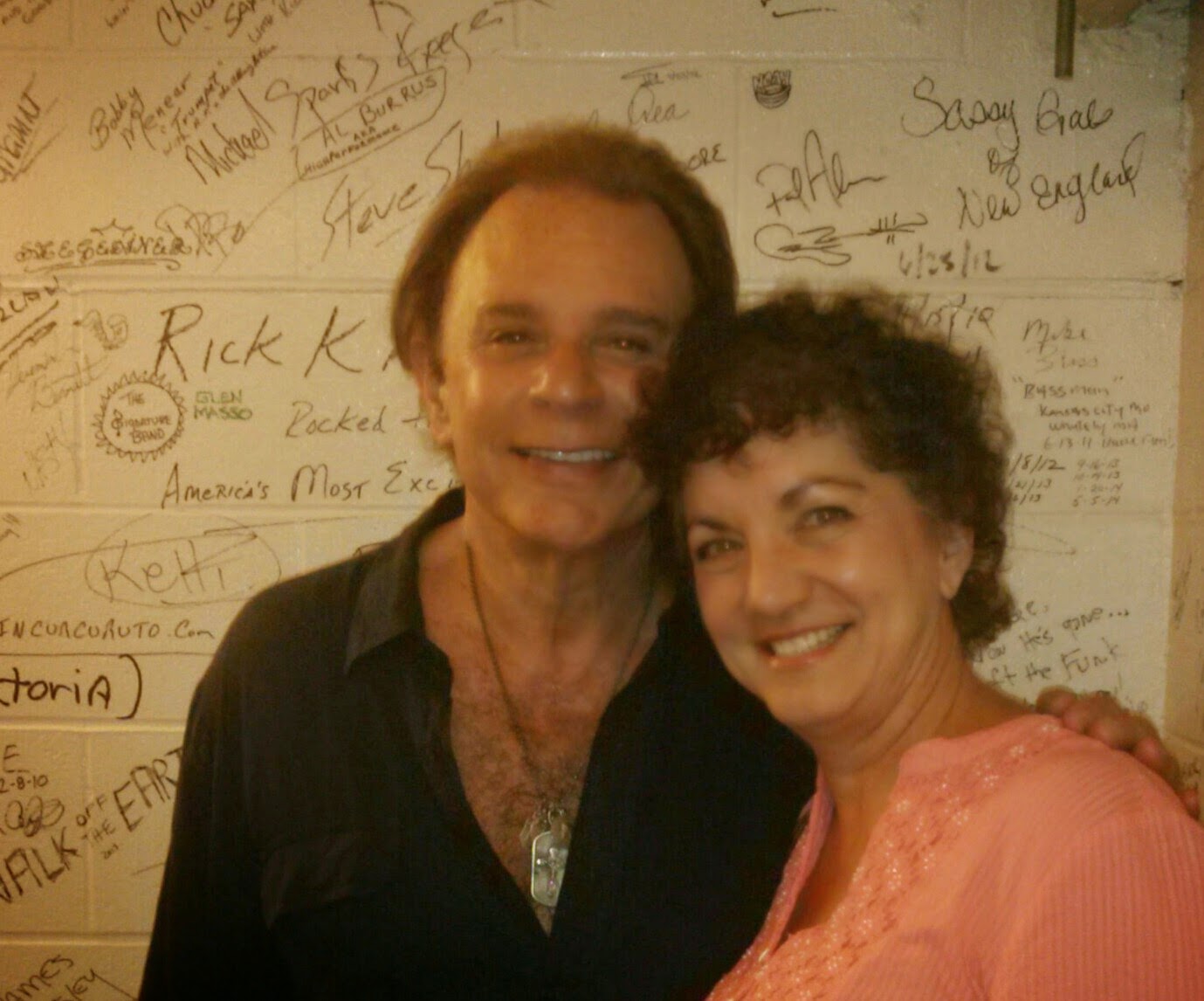