We were able to enjoy another great night of music at The Arcada Theatre Saturday Night ... a triple play of major acts that teamed up to feature a virtual Who's Who of late '70's / early '80's rock ... Firefall, Orleans and Ambrosia put on a very enthusiastic show to the delight of a near-capacity crowd who rewarded them with thunderous applause and repeated standing ovations for their efforts.  [By the way, very special thanks to the loud-mouthed asshole sitting in the back of the balcony who felt it necessary to scream out the names of each group's best-known songs in an effort, I guess, to fulfill some sort of "personal request".  Thank GOD for his efforts ... I'm sure NONE of these artists would have considered performing their biggest hits without his suggestions!  The audience was treated to a far more enjoyable show as a result of his efforts.]  (WTG, IDIOT!!!)

Each group performed separately (unlike the Sail Rock show I saw last year where Orleans acted as the back-up band for all of the acts) and each artist performed a full set of material rather than just a handful sampling of hits, ala last year's show.  The whole thing kicked off with Firefall. 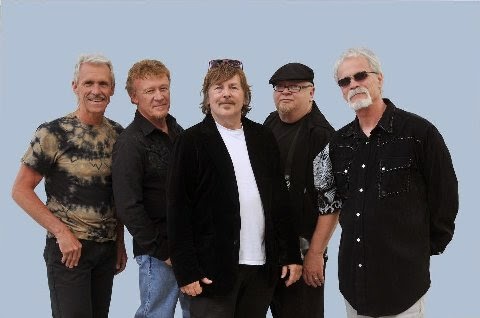 There are certain artists, even after all these years, that still have it ... that special spark that marries a song to an artist ... and a certain joy that comes with presenting that magic to an audience ... and Firefall had every bit of that (and more) going on Saturday Night.  (I will admit to being a little bit surprised to find that they were the opening act ... song for song, they had more chart hits than either of the other acts and, without question, put on the strongest set of the night.)

Lead vocals are shared between group founder Jock Bartley and newcomer Jace Hill, who recapture the great sound of the original band, thanks to able assistance from original bassist Mark Andes (who came by way of Spirit and Jo Jo Gunne ... and also did a stint with Heart), original guitarist Larry Burnett and drummer Sandy Ficca.  David Muse (who joined the band in 1977 at the peak of their career) is a marvel to watch on sax, flute, keyboards and percussion and on several occasions brought the crowd to its feet in recognition of his incredible talent.  (He also came out to give sax-support to Orleans during their set.)  I don't think I've ever seen anyone better or more adept at performing pure magic with their instrument ... we bow before you in humble praise!

All the hits were presented in top-notch performances.  Crowd favorites?  They responded to each and every one, with special love shown for "Just Remember I Love You", "Cinderella", "You Are The Woman" and "Strange Way", which turned into a masterful jam session to end their set.  In a word:

After a brief set change over, Orleans took the stage.  (We saw Orleans perform with Firefall at last year's Sail Rock concert in Aurora ... you can read that full review here:  Click here: Forgotten Hits: SAIL ROCK - Our Concert Review )

Once again, they performed a very credible set of music, including their three biggest hits "Dance With Me" (which opened the show to rousing applause ... you don't see too many artists open their set with a hit this big!), "Love Takes Time" (one of those many Forgotten Hits we bitch about so often here that absolutely deserves to still be played on the radio today ... people LOVE this song!!!) and "Still The One', their up-on-your-feet show closer that was far and away one of the best performances of the entire night.

In between they did their first chart hit, "Let There Be Music", a slowed-down version of the King Harvest hit "Dancing In The Moonlight", a great New Orleans-tinged track called "Juliet" as well as a couple of brand new songs that I've got to tell you sound right on par with some of their very best work.  (A new 2-CD set is available featuring all of Orleans' biggest hits, some new tracks and an entire album of their live show.)

These guys struggled for a little while after the death of founder and lead vocalist Larry Hoppen a couple of years ago ... but brothers Lance and Lane have soldiered on brilliantly with Lance very capably taking over the lead vocal chores vacated by his brother's passing.  (To that end a big plus was the inclusion of founding member John Hall, who left the band briefly to serve in The U.S. House Of Representatives!!!  It's not every day you see a congressman up there rockin' it on stage!!!)

The group is rounded out by Charlie Morgan on drums and Dennis "Fly" Amero on guitar.  Their brand new CD (which they were autographing in the lobby after the show) is available through their website ... Click here: Enjoy the sounds of Orleans again - Still the One, Dance With Me, Love Takes Time and all the great sounds old and 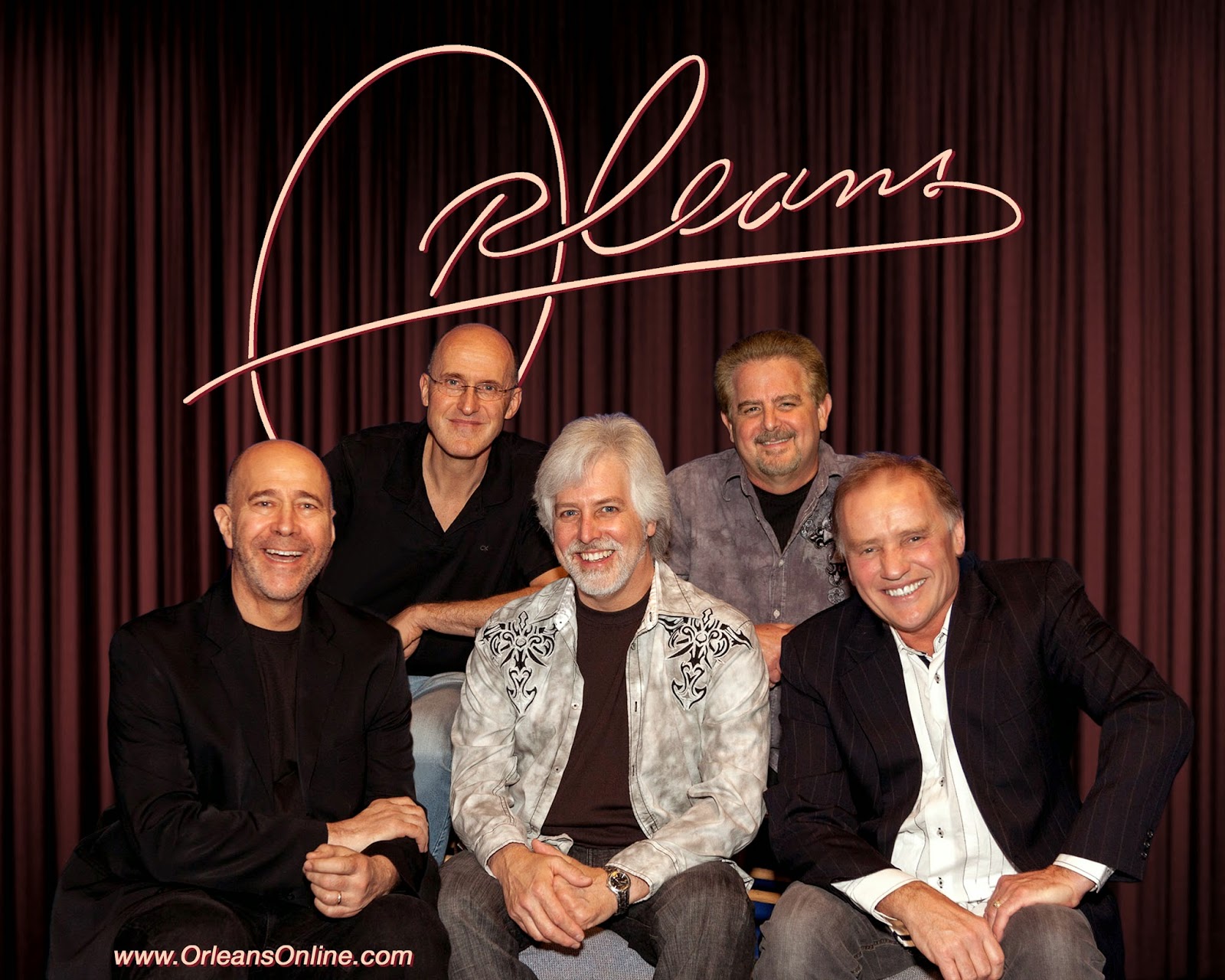 After another set change-over, headliners Ambrosia took the stage. 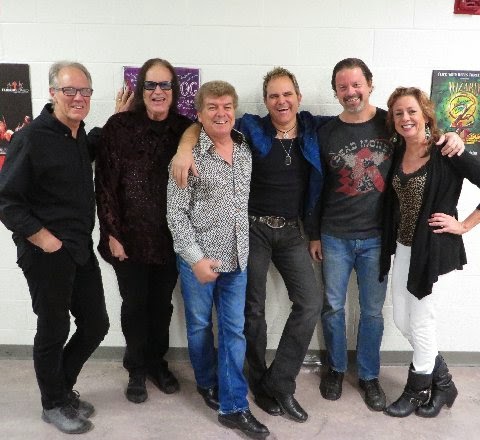 This was our first time seeing Ambrosia, one of our favorite bands from the late '70's and early '80's.

With former lead singer David Pack now off doing his solo career, we knew it wouldn't sound quite the same ... but I've got to say that new lead vocalist Ken Stacey can certainly sing ... he exhibited an incredible vocal range and along the way hit some notes I didn't even know existed!!!  Coupled with original bassist and vocalist Joe Puerta, they did their best to recreate the sound of Ambrosia we came to love back in the day.  This worked to its greatest effect on two of our personal favorites, "Holdin' On To Yesterday" and "Biggest Part Of Me", far and away their best performances of the night.

Original drummer Burleigh Drummond did his best to "MC" the proceedings, entertaining the crowd with the story of how their biggest hit "How Much I Feel" spawned a late '70's / early '80's baby boom as so many couples made love to this song.  Puerta also commented on how "Biggest Part Of Me" was nominated for three Grammy Awards in 1980 but didn't win any of them ... losing "Best Performance By A Duo Or Group" honors to Lipps, Inc., and "Funkytown"!!!  (Wow!  What's wrong with THIS picture?!?!?)

Other selections included early releases like "Nice, Nice, Very Nice" (which opened the show) and their version of "Magical Mystery Tour", which Ambrosia recorded in 1977 for the ill-fated soundtrack to the film "All This And World War II", which I swear was released directly to the cut-out bins back in the day!  It was a HORRENDOUS attempt to use the music of The Beatles, recorded by other hip, contemporary artists of the day, as the soundtrack to a God-Awful Documentary which, quite honestly, I don't even know ever saw the light of day!  (Think "Sgt. Pepper's Lonely Hearts Club Band" / Peter Frampton / Bee Gees disaster ... times four!!!)

There was a certain jazz/pop/rock feel to the original Ambrosia music and this simply did not come across in the muddled sound presented on stage Saturday Night.  All the beautiful nuances of their music were lost in their efforts to rock us.  When they first took the stage and said something to the effect of "Now you're going to see a real rock band", I should have known then that we were in trouble .. and that we were not going to hear the very essence of what made Ambrosia stand out from the rest of the crowd in the first place.  Sadly, this proved to be the case.

That being said, props to the few tracks that DID work ... we still hold the music of Ambrosia very dear to our hearts ... but this may be yet another a case of if you want to hear this music presented correctly and true to form, you may have to go see original lead singer David Pack perform it instead.

Although many didn't, we DID stay till the end ... and, as such, were treated to an all-star jam session as musicians from each of the bands came back out for a group encore jam to the Jackson Browne / Eagles Hit "Take It Easy" and The Animals' hit "I'm Crying".  "Take It Easy" was a very enjoyable experience (especially since this is one of my least-favorite Eagles tracks) ... but "I'm Crying" quickly deteriorated into not much more than obnoxious noise ... by which point, we were ready to leave.

Folks came from all over the country to see this killer line-up Saturday Night.  Charismatic and always congenial host Ron Onesti makes it a point to go out and mingle and meet his audience ... and Saturday Night was no exception.  As such, he introduced us to audience members who had traveled from as far away as Spokane, Washington, Iowa, Idaho, St. Louis, MO, and more just to see this show ... and then went out of his way to make them all feel right at home (and very special!) within the confines of the friendly Arcada Theatre.  (These folks will not soon forget their Arcada Experience ... and it's great to hear that the word is getting out about this place ... now the #1 Musical Showplace in the Midwest, fans are traveling from all over the country to see the eclectic line-up that Onesti presents on a regular basis.)

Think I'm kidding?  Check out this list of artists coming to The Arcada in the next month or two:

Tickets for all shows available through The Arcada Theatre Online Box Office at www.oshows.com


SONGS WE MISSED:
Being Forgotten Hits, we tend to favor some of the GREAT music recorded by these artists that never got all they deserved either the first time around or in 30+ years of hindsight.  As such, we've got a few tracks to feature today from these three landmark artists that most certainly deserve your attention ...

First up, from Firefall -
Their 1983 "comeback hit", "Always ... this is a KILLER track that really showcases the bands soft-rock harmonies and it should have been a monster hit.  Instead, it crapped out at #51.  "Strange Way" and "You Are The Woman" may be their best-known, best-loved tracks ... but I've got rank this one right up there amongst my favorites.

The aforementioned "Love Takes Time" brought the crowd to their feet Saturday Night ... this was a #11 Hit in 1979 ... yet you NEVER hear it ... and it's a very well-loved tune ... a crowd-pleaser to say the least.
And, since John Hall is back in the fold again, I've just GOT to feature this solo hit from John from 1983 ... "Love Me Again".  Somehow this record failed to even make The Top 50 ... yet it's as infectious as they come!  Give it a listen and see if you don't agree.


Ambrosia -
And finally, one of my early favorites from these guys.
They did their #63 minor chart hit "Nice, Nice, Very Nice" ... which is a "nice" enough track ... but I've always maintained that the record company pushed the wrong side of this single.  The flipside was a spot-on look at things to come for this band, who REALLY made their mark with their soft-rock ballads.  As such, "Lover Arrive" remains one of my all-time favorite Ambrosia songs, right up there with "Holdin' On To Yesterday" (from the same album) in my book!