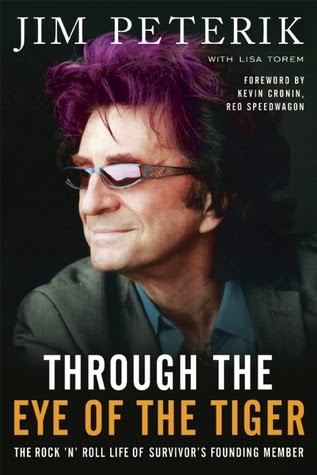 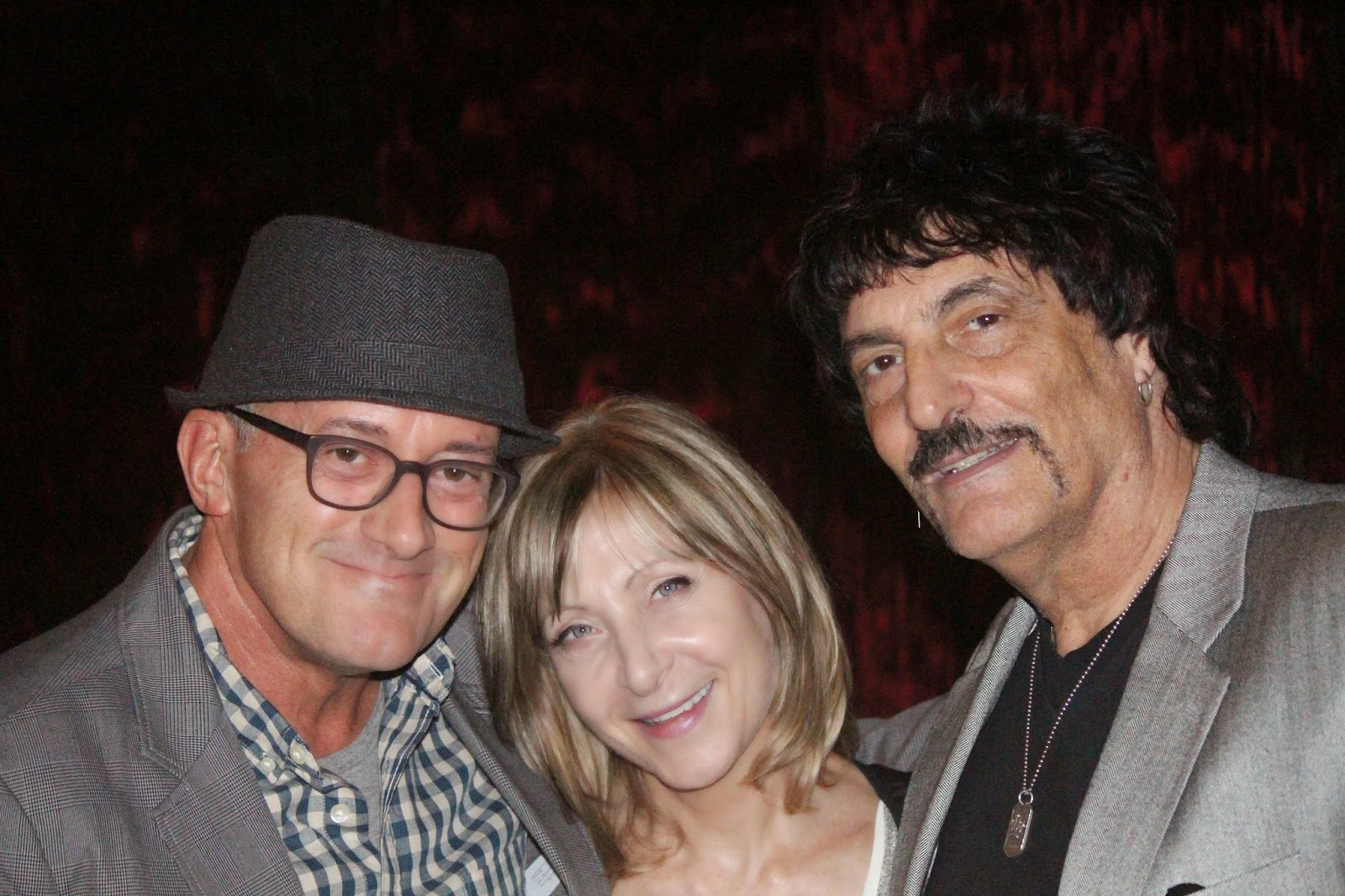 L-R: dis COMPANY's DAVID SALIDOR / LESLIE GOLD (The Radio Chick) /
CARMINE  APPICE at last week's launch party for the JIM PETRIK book
'THROUGH THE EYE OF THE TIGER' (Benbella Books) at The Cutting Room in NYC.
(Photo by Lynne Peters) 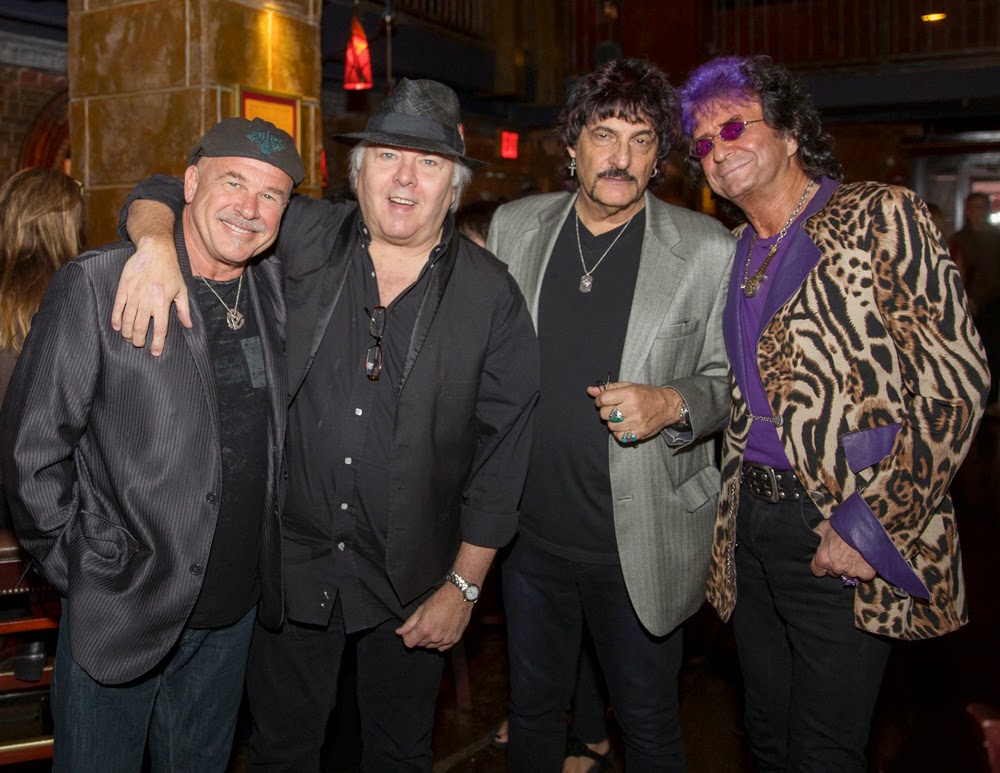 PEPPY CASTRO (of THE GOOD RATS) / GENE CORNISH (of THE RASCALS) /
CARMEN APPICE (of VANILLA FUDGE) / and JIM PETERIK (SURVIVOR / IDES OF MARCH)
at the New York Launch Party for Jim's new book THROUGH THE EYE OF THE TIGER.
(Photo by Lynne Peters)
David also sent us a link to a review of the party that was published on the Times Square Gossip website, written by G.H. Harding: http://www.timessquaregossip.com/2014/10/rosie-odonnells-view-is-not-whoppi.html

Below, you'll also find his review of the book:

JIM PETERIK / THROUGH THE EYE OF THE TIGER
(REVIEW BY DAVID SALIDOR)
I just finished the Jim Peterik book (Through The Eye Of The Tiger / BenBella Books) and just loved it … and I’ve been reading most of them, from the Tommy James book to the Sammy Hagar book ... and loving them all.
I first heard “Vehicle” when it came out in 1970 and it was an instant attraction between us. Those horns … (I can hear them in my head like it was yesterday) just pulled me in. And those lyrics ... just killer!  It was kick to hear how Peterik wrote that song about driving his then girl-friend (and, now his wife) around everywhere.
You can hear it in the lyrics: I’ll take you anywhere you want to go.
I also loved that some his early records appeared on the Epitome Label … which he said every pronounced at Epi-Tome. He’s got a great way of telling these stories. Just loved it.
They certainly don't write ‘em like that anymore and when I recently went to relive the song again, I was knocked out by how well it held up.
From The Ides Of March, Jim went onto to form Survivor. I sort of knew their story, but in vivid and sometimes heartbreakingly detail, he describes what the band was all about, and I was amazed to learn that he segued so successfully from guitar to keyboards for the band.
The whole “Eye Of Tiger” story is pretty revelatory, too; and so was working with the legendary Scotti  Brothers. I was at Atlantic for a bit myself back in the day, so I met the brothers on many occasions.
I also dug the band’s follow up hit “Burning Heart,” which was earmarked for a follow up Rocky-film.
His travails with the band are the stuff of legend and while what happened wasn’t anything I hadn’t heard before, still, you feel for the guy.
I think the one thing that I got more than anything else out of the book, is how serious he takes his craft; taking a Sony-recorder with him everywhere. Songwriting is, or, used to be a highly valued profession and I’ve always had the utmost respect for purveyors of the craft.
You have to be in it, to win in could well be the motto of the book, too.
His post-Survivor activities, with Pride Of Lions and even The Beach Boys is pretty terrific, too. Imagine my surprise opening up that last Beach Boys album and seeing Jim’s name on it.
I think if you’re a survivor (!!!) in this business, you’ll just love this one. I met Jim for a few at a book launch in New York his week and he was exactly as I’d imagine; sharp, savvy and taking care of business.
A must-read for sure.
-- David Salidor
*****

One more from our FH Buddy Carl Wiser who brings us the always-interesting Songfacts.com website ...
He not only sent us a review of Jim's book ... but also a link to a brand new, exclusive interview he did with Peterik, now up on his site:

It's hard to write a compelling rock n' roll memoir when your Led Zeppelin story is about declining an invitation to party with the band. Jim is courteous, responsible, unfailingly polite, a believer in moderation, and still married to his high school sweetheart. The conflict comes from his relationship with Frankie Sullivan, his creative partner in Survivor and also his nemesis.
As Jim tells it, he acquiesced to Sullivan's demands for the sake of harmony, and these demands were questionable: refusing to use Rocky III footage in the "Eye of the Tiger" video and skipping the Grammy Awards when they were nominated for the song. You keep waiting for fistfights and smashed guitars (a-la the Eagles), but it just kind of fizzles out, which is really how so many relationships end.
It's also the story of getting that one big shot, and answering the bell with a knockout. That call came from Sylvester Stallone, and the knockout punch was "Eye of the Tiger."
I found Jim's story compelling, as so much of it is about striving for success, then confronting the challenges that come with it.
-- Carl Wiser / Songfacts
Meanwhile, here's our interview with Jim Peterik:
http://www.songfacts.com/blog/interviews/jim_peterik_of_survivor/