We lost a good one yesterday ...

A long-time friend of Forgotten Hits, Paul Revere passed away on Saturday at the age of 76. 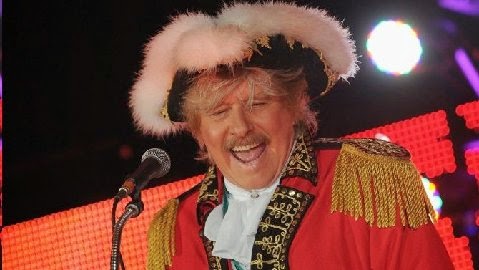 He had been in poor health for the last several years and officially retired a few months ago, announcing that his band would continue to perform without him as Paul Revere's Raiders.  (His son, Jamie, also recently rejoined the band, to help carry on his father's legacy.)

Revere was a rock and roll legend ... as well as a show-biz legend.  Pleasing the fans ALWAYS came first ... he lived to be on stage.  (We saw him several months ago at The Arcada Theatre in what would turn out to be one of his final live performances.  Shortly after that, doctor's orders forced him to stay home while the band went out on the road to fulfill their commitments ... and then in July he formally announced his retirement.)
Click here: Forgotten Hits: Paul Revere and the Raiders with The New Colony Six

One of the best quotes I have ever read came last night from Terry Currier, who told the audience at The Aladdin Theater on hand for The Oregon Music Hall Of Fame induction ceremony:

"Two bands recorded 'Louie Louie' in Portland in 1963.
One ... the Kingsmen ... had a hit.
Paul Revere and the Raiders would have a career."

This morning, the official Paul Revere and the Raiders website posted a love letter to Paul, signed by "Everyone Who Has Ever Met You" ... there is no way of calculating just how many lives he touched over the years ... suffice to say that number is well into the tens of millions.
Click here: Paul Revere & The Raiders | Paul Revere

We love you, Paul ... and we'll miss you ... but you needn't worry ... your music will live on forever.  The Paul Revere and the Raiders Hit List is the stuff of legends.  No, they never were inducted into The Rock And Roll Hall Of Fame ... but that's not THEIR fault ... they certainly deserve a space there ... that's just the on-going bonehead mentality of the people in charge.  (Yet this morning, the lead story on RollingStone.com is the passing of Paul Revere ... go figure.)

Play and enjoy their music again today ... remember how much fun it was to watch them on "Where The Action Is" when you got home from school ... or any of the numerous other tv shows they appeared on back in the day.  Relive those moments when "16 Magazine" featured profiles of the band between every cover.

We all know that Paul had been very ill for a while, and you always hope for the best -- a miracle, maybe. But it just wasn't to be this time. It is still surreal to think that he is gone. I'm sure this cannot be an easy time for Sydney and all of Paul's family, and I wish them all the best, and peace.
In 1958, Revere and I got together in Idaho, and it clicked. We had a great run, and for a real long stretch, it was magic. All good things seem to come to an end, though, and eventually Revere and I drifted apart and went our separate ways. But I want to remember the good times, when he was my best friend and we were partners, and the world was ours for a while. Right now I would like to think he's playing wild boogie-woogie on that big golden upright in the sky. Play on, brother, see you down the road.
-- Mark Lindsay

It's a very sad day for the Raider legacy ... my heart is broken.
He was a dear friend of mine.  He was a good man with a great big heart, and he dedicated his life to his band for the past five decades.
He will truly be missed in the rock and roll world, and by his friends who loved him as I did.
He was an original, 'the genuine article' – one of a kind – and his accomplishments need to be touted and celebrated.
-- Phil "Fang" Volk