There is something truly magical and amazing about the sound of sibling voices singing together ... that combination creates a very special blend of musical magic that just strikes a nerve at the very core of the listener ... simply put, there really is nothing else quite like it.

Never was this more in evidence than Friday Night at The Arcada Theatre when we saw The Cowsills and The Nelsons ... the meshing of their respective voices define the highest standard of keeping it "all in the family".

We missed The Cowsills the last time they performed at The Arcada ... but the reviews we received from our readers were outstanding ... so we were REALLY looking forward to this performance.  They did not disappoint. 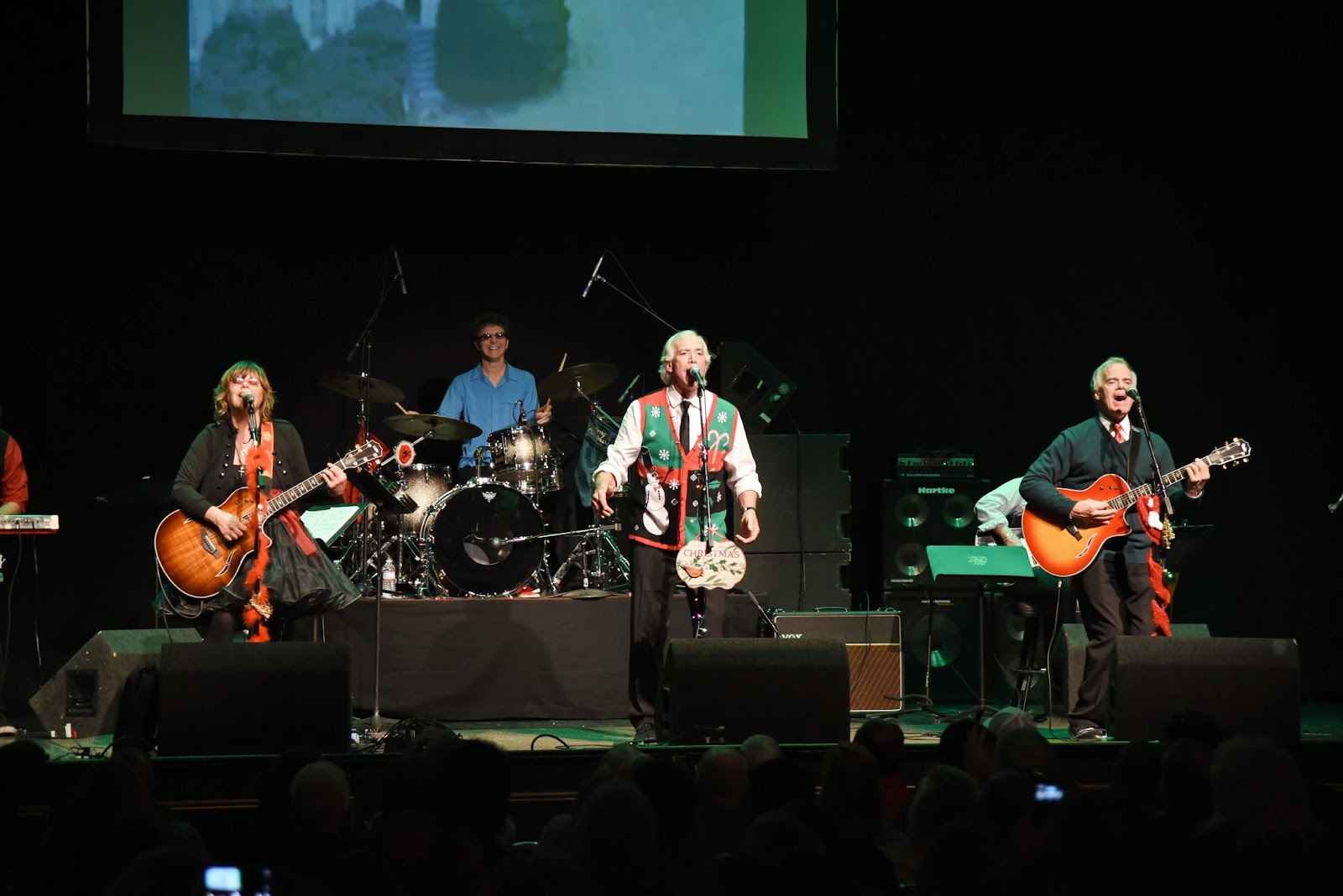 Revamping their show to feature more of a Christmas theme, they still managed to perform ALL of their biggest hits, intermingled with some great Christmas standards (as well as a few brand new Christmas originals of their own.)  Despite the fact that it has been nearly 46 years since their last big hit, I am here to tell you that they have not lost a thing musically during all that time.  I was blown away by just how youthful their voices still sound ... if anything, they seem to have gotten even better with age.  (What they HAVE lost is better than half their family ... it was not lost on the audience when Bob Cowsill commented "We used to be nine ... now we're down to four") ... but THREE of those four were up there on the stage Friday Night and they couldn't have sounded any better.  (One of Susan's song lyrics also mentioned that "you can't stop a hurricane", certainly a reference to the loss of her brother Barry, famously taken by Hurricane Katrina a few years ago ... you couldn't help but feel their pain.)

This very special return performance featured Bob Cowsill, his brother Paul (clowning around in what certainly would have been a contender in "The Ugliest Christmas Sweater" Contest at nearly any bar in America) and sister Susan, who proved herself to be both quite the lead singer as well as quite the songwriter when several of her songs were featured Friday Night.  Brother John currently drums for The Beach Boys Band and occasionally still performs with the family when his schedule allows it ... but brothers Richard, Barry and Bill and Mom Barbara and Dad Bud have all since passed on.

They have still managed to keep it a Family Affair, however, by enlisting the children of several of the original members as well as Susan's husband on drums ... and they seemed to be having SO much fun up there on stage that it was downright infectious ... you simply couldn't help but have a good time as they kidded and clowned around with one another.  The fact that the music itself sounded so damn good just made the whole experience that much more enjoyable.

The show was very "loose" ... on at least a couple of occasions there were false starts on songs (or they just flat out stopped them all together and started over because they didn't like the way things were heading ... Who does that???  AND makes it all that much more fun in doing so???)

They even paid homage to The Partridge Family by running a clip of Shirley Jones talking about the REAL inspiration for their hit television series ... followed by The Cowsills performing The Partridge Family's biggest #1 Hit, "I Think I Love You" to damn near perfection.


Frannie and I both looked at each other with both pure joy and amazement when they sang "The Rain, The Park And Other Things" and sounded JUST like the record all these years later.  Other hits followed like "We Can Fly" and their theme from the hit television series "Love, American Style" (which, by the way, sounds JUST like "We Can Fly" in hindsight!!!  lol)  They joked about how Brother Bill didn't really like their Top Ten Hit "Indian Lake" ... until Brian Wilson told him how much he liked their new song ... and then suddenly Bill liked it, too.  (If you still haven't seen the Showtime Documentary on the band, do yourself a favor and buy it, rent it, or On Demand it ... these kids did NOT have an easy life after their initial success ... and it's laid out there for all to see in living color ... NOT a pretty picture ... yet still a very fun and interesting film to watch.)  They closed the show with their biggest hit, "Hair", to thunderous applause, Susan's "that's disgusting" ad-libs making it all that much more fun to watch.  Start to finish, this was a stand-out, top notch show. 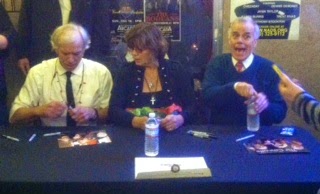 (Paul, Susan and Bob, signing memorabilia after the show ...
above photo by Frannie Kotal ... all others by Luciano Bilotti) 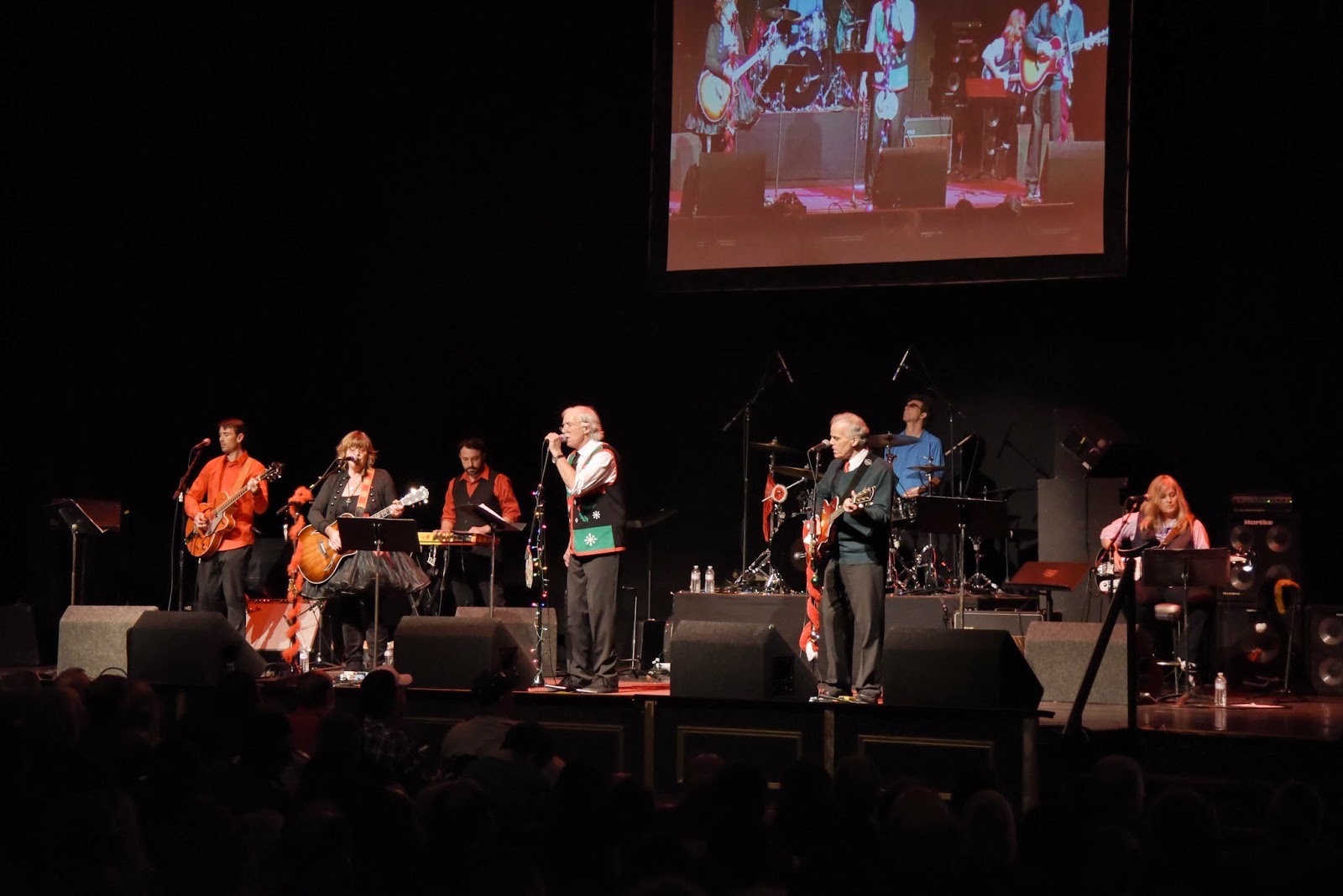 We saw headliners The Nelsons earlier this year when they brought their tribute show to their father, "Ricky Nelson Remembered" to The Arcada Theatre. 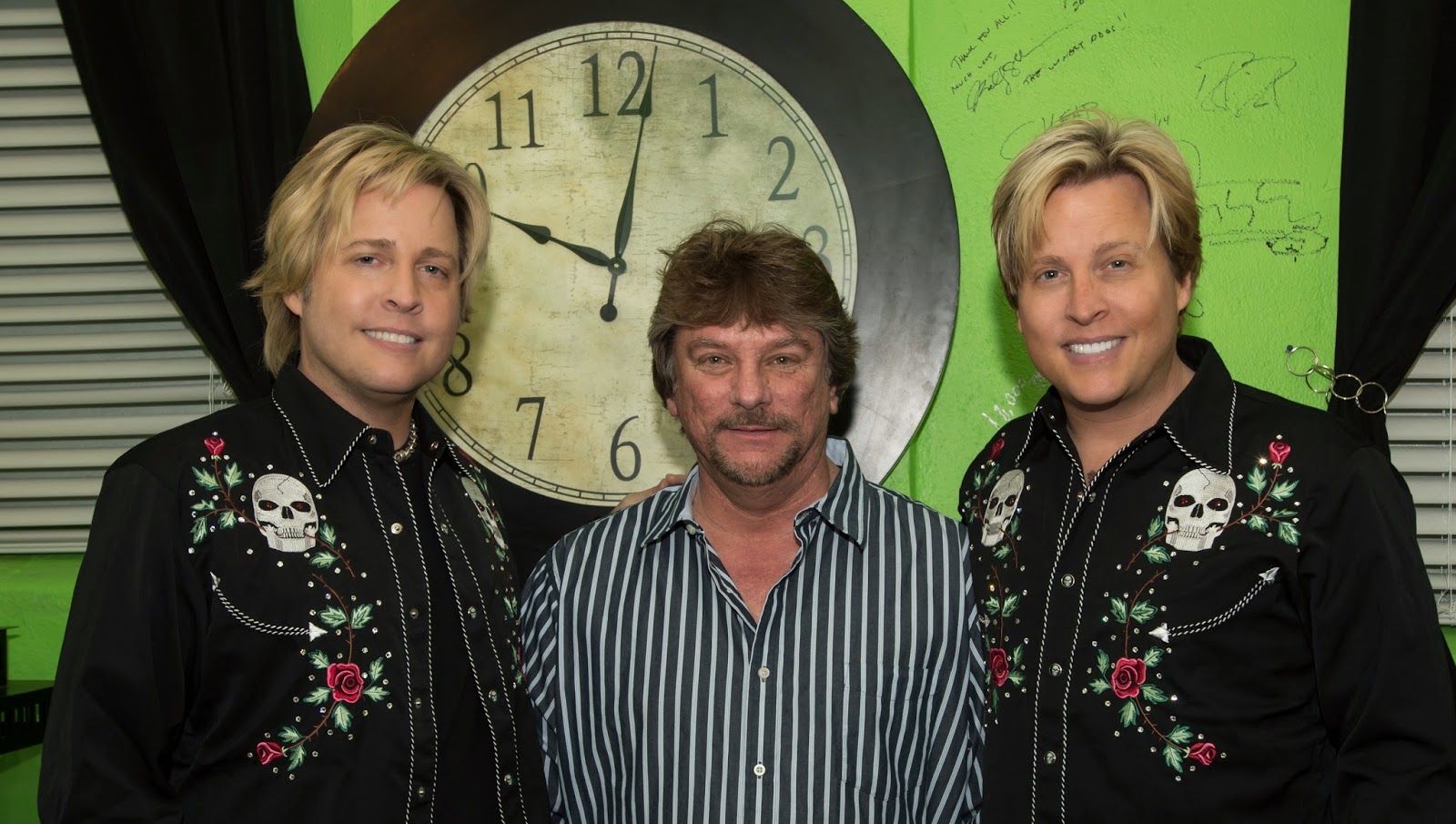 (Me and The Nelsons, earlier this year, backstage at The Arcada)

Having been a HUGE fan of their father (I was fortunate enough to have seen him in concert several times ... always one of my favorites), I absolutely LOVED that show ... but this time around they, too, completely revamped their set to include a good, solid hour of holiday songs and reminisces from The Nelson Family Scrapbook, both in video and photo form.  (Clips of their famous dad singing "Jingle Bells" and "The Christmas Song" ["Chestnuts Roasting On An Open Fire"] were amongst the highlights.) 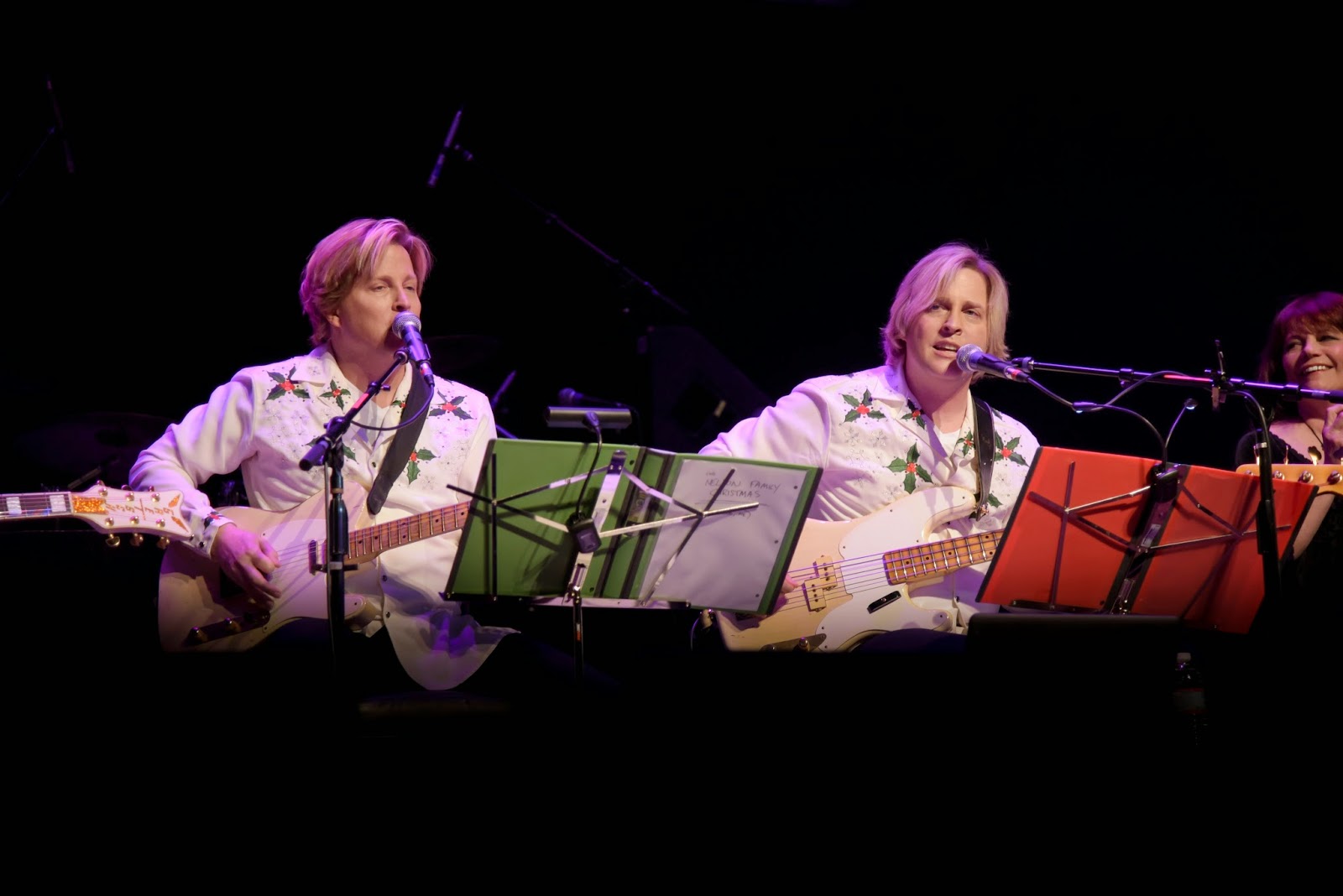 This time around they were accompanied by Kathie Baillie and her husband Michael Bonagura, both from the hit country group Baillie and the Boys.  Michael added some outstanding guitar riffs to go along with The Nelson Brothers' always perfect combination of guitars, bass and vocals ... again, something magical happens whenever these two boys sing together. 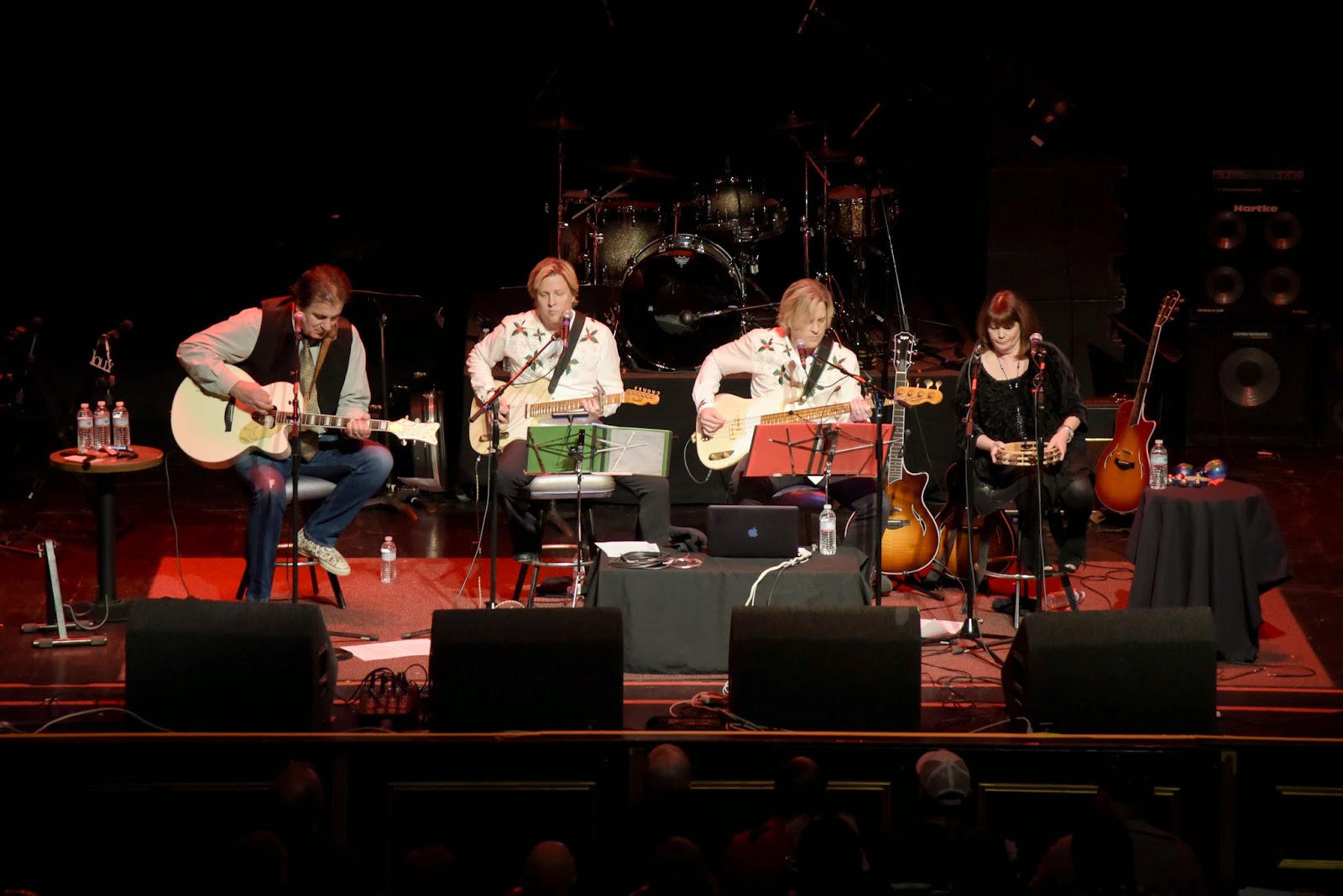 I couldn't believe they had put together an entirely new act just to fill the Christmas market.  (Truthfully for me, the Christmas music went on a bit too long ... like a few other members of the audience who made their feelings more vocally known, I couldn't wait for them to dig in and play a couple of their pop's tunes along with some of their own.  I think that had they spread the Christmas cheer out a little bit throughout their set rather than hitting us with a full hour of nothing but Christmas music right off the bat, it would have made for a more enjoyable and varied show.)

The Nelsons are partially through completing a brand new Christmas album, which they promise to have ready for purchase when they return to The Arcada next December for another show.  (Hint-hint to Ron Onesti ... great marketing ploy, eh?)  They TRULY seem to enjoy the ambiance of this old, vintage theater ... and I felt it downright insulting that so few people showed up to see such an amazing night of music.  This was truly YOUR loss if you missed it ... a night of pure, musical magic from beginning to end.  (The Nelson Family, in some fashion, has been entertaining all of OUR families for over a hundred years now ... pretty amazing when you stop to think about it!)

Opening the evening's festivities were The Cadillac Casanovas, who added a couple of Christmas numbers to THEIR set as well.  (We LOVE these guys ... this has to be the third or fourth time we've seen them this year ... and they always show their audience a real good time.  Word is they're already booked for a return performance next April, backing up The New Colony Six for a fund-raising concert.  Forgotten Hits Reader, Author, Chicago Broadcasting Legend, and former New Colony Six Roadie Chet Coppock will MC that show ... be sure to check out Chet's review of the Ronnie Spector Christmas Concert tomorrow in Forgotten Hits!)

The Nelsons told us that they would be performing at The Surf Ballroom the very next night ... this, of course, is the last place that Buddy Holly played that fateful night in 1959.  This has to ring ESPECIALLY close to home for Matthew and Gunnar Nelson, who also lost their father in a plane crash back on New Year's Eve, 1985.  Turns out The Cadillac Casanovas will be appearing at The Surf Ballroom on January 30th.  These guys should tear that place up ... they are SO much fun to watch. (Coincidently we also received emails last week announcing the appearances of Chris Montez, Brian Hyland and The Crystals on January 31st!) Frankie Avalon, Lou Christie, Bill Haley, Jr. and Tommy Allsup are also part of this very special all-star weekend line-up.  (See poster below ... a killer line-up to be sure!) 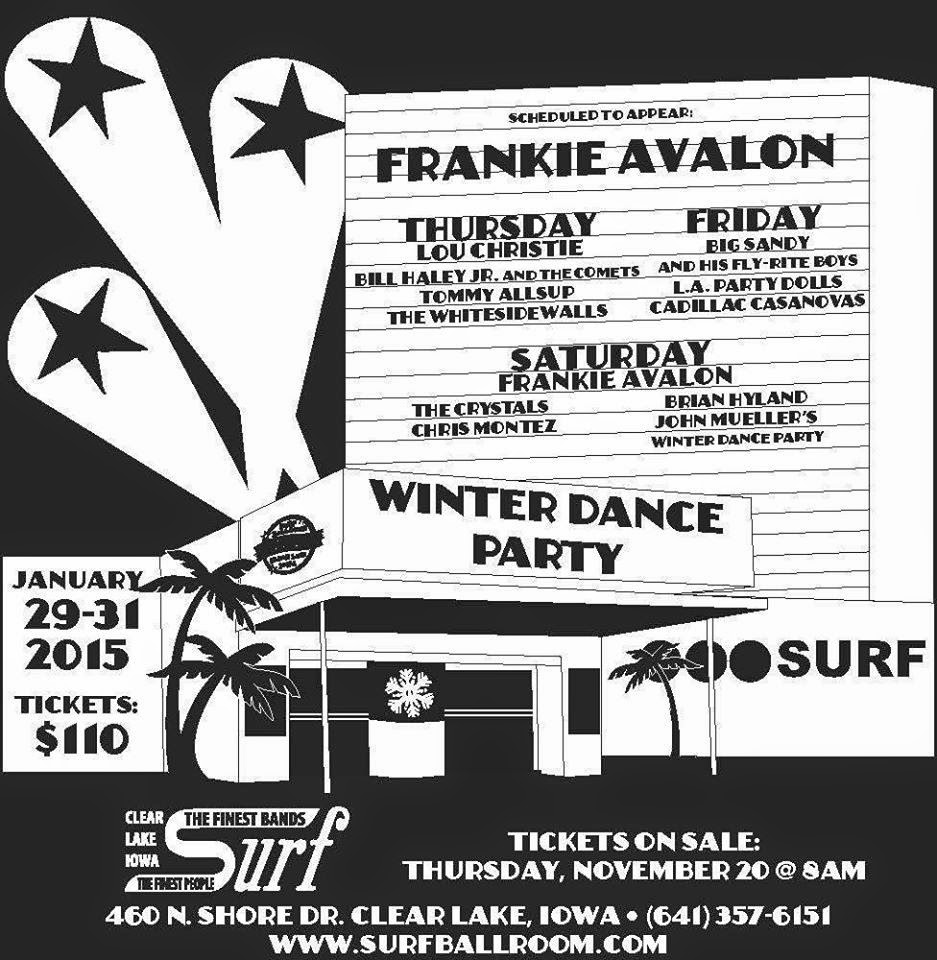 Still a few great holiday shows coming up at The Arcada ... in fact, we're expecting reader reviews from concerts held this past weekend of both the Felix Cavaliere Holiday Show at The Genesee Theatre as well as Ronnie Spector's "Best Christmas Ever" at The Arcada, which we'll run later in the week.

The Arcada has a Holiday Ice Skating Spectacular on December 10th, Gary Hoey on December 11th (with special guest Lita Ford), Frank Sinatra's 99th Birthday Party Bash on December 12th, Jim Peterik and The Ides Of March on Saturday, December 13th, The Trans Infinity Orchestra on December 14th, LeAnn Rimes on December 18th, followed by a special three-night showing of "It's A Wonderful Life" December 19th, 20th and 21st, with a very special in-house appearance by Karolyn Grimes, ZuZu from the movie.

The Genesee Theatre presents "The Nutcracker" on December 12th and 13th, followed by the Michael McDonald Christmas and Hits Concert on December 14th.  Get out and spread the holiday cheer by attending some of these shows!
Posted by Kent Kotal at 6:02 AM