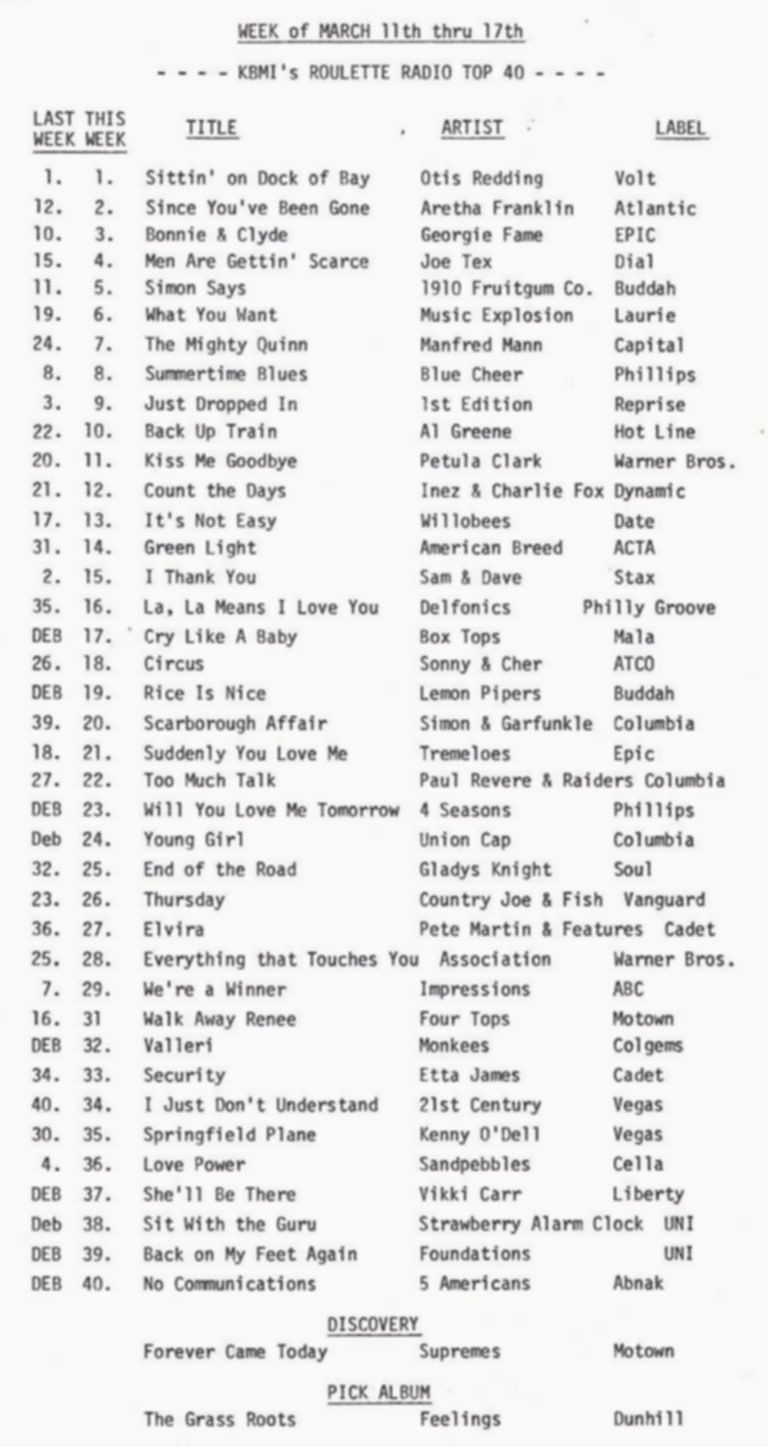 
Henderson may not ring a bell like it's next door neighbor, Las Vegas, but it has about 300,000 people today.  In 1968, it had a cool station playing some great forgotten hits.  The Vegas area was being blasted by the bubblegum psychedelic sounds of the Music Explosion and "What You Want (Baby I Want You)" this week.  The top producers of 1968 were likely Jerry Kasenetz and Jeff Katz with their parade of bubblegum hits on the charts.  Although Buddah Records became basically known for this genre, Laurie Records enjoyed many of these hits of their doings, too, including THIS one.  There will likely be very few (if any) charts in this 1968 collection to NOT feature a K-K song or two.
One cool tune that charted almost nowhere else is Sonny & Cher's "Circus" which you can imagine might go over well in Vegas.  A pretty "heavy" sound and lyric complete with mob gunshots that even surpass Georgie Fame's #3 "Bonnie & Clyde."  It's a Sonny original that I would have thought would break nationally with its' "mouth popping" (literally!) percussion and its doom filled ending somewhat in a "Ode to Billie Joe" musical arrangement!

3/13/68:  The Beatles’ “Lady Madonna” / “The Inner Light” single released is Great Britain, their last release for the Parlophone record label.  A few months later, they would issue their first single on their own brand new record label, Apple Records. (“Hey Jude”)

3/15/68:  The Del Satins and The Rhythm Method merge to form a new group, The Brooklyn Bridge.  In less than a year, they will top the charts with “The Worst That Could Happen,” a Jimmy Webb song sung by the incredible voice of lead singer Johnny Maestro.  (Story goes that when the two groups merged to form an eleven-piece band, talent agent Dave Zahn told their manager, Betty Sperber, “Jesus Christ, Betty … tryin’ to sell that will be like tryin’ to sell the Brooklyn Bridge!” … and that’s how they got their new name!)

Also on this date, “(Sittin’ On) The Dock Of The Bay” reaches #1 on The Billboard Hot 100 Pop Singles Chart, where it will stay for four weeks.  (Incredibly, it will NOT reach #1 in either Cash Box or Record World.)  It IS #1 in Nevada, however, as shown in this week's special Saturday Survey!

3/17/68:  The Bee Gees perform “Words” and “To Love Somebody” on The Ed Sullivan Show.  It is their US television debut.