Congratulations to Art Walicki and Phil Miglioratti … they’ll be joining me at the Al Jardine concert tonight at City Winery Chicago!  (Very special thanks to Dan Conroe of The City Winery for this special FH ticket giveaway offer.)  Watch for our reviews later in the week. 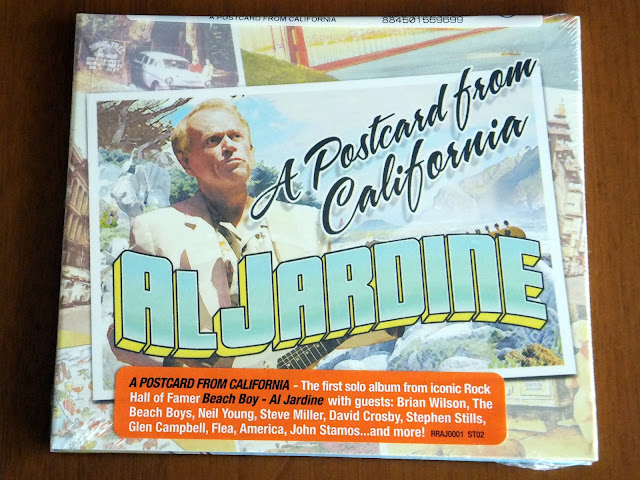 Of course that means we’re going to have to miss the premier of WKRP in Cincinnati tonight on Me-TV.  (Damn!  And the NCAA finale, too … but now that Loyola’s been eliminated, my heart’s just not in it.)

In a promo piece released by Me-TV showing little-known facts about the series, we found this interesting tidbit:

WKRP in Cincinnati became a legitimate vehicle for launching bands to pop success. Acts like U2, Toto, The Knack. The Cars and Devo, all count WKRP as pivotal in exploding their audiences. But the biggest band the show helped hit was probably Blondie, whose album Parallel Lines went on to become a gold record after the show played "Heart of Glass" from it on air. Blondie was so grateful, they donated a gold record to the show and you can sometimes see it hanging up in the background during scenes that take place in the bullpen from the second, third and fourth seasons.

A few days ago we posted the complete tour schedule for Ringo Starr’s All-Starr Band.  That’s why I couldn’t help but smile when I read this quote in a 1965 edition of the popular British Music Tabloid, “Melody Maker” the other day.  (Starr turns 78 this July) …

By the way, Ringo stopped performing “You’re 16” as part of his act a few years ago because he didn’t think it was the kind of song a 75 year old man should be singing.  (lol!)  kk

Things I wonder about ...

Do you think they let Yvonne Elliman watch the live Easter Night broadcast of "Jesus Christ Superstar" from prison?

Yvonne and her husband, Allen Alexader have been sentenced to a 14-day prison stay for drug possession.  (Elliman, of course, first rose to fame playing Mary Magdalene both on Broadway and in the original film of "Jesus Christ Superstar" and first broke thru on the charts with her version of "I Don't Know How To Love Him," a #23 Hit in 1971.)  Helen Reddy bested her chart showing with a #12 peak with her version of the popular tune.  (kk)

By the way, Alice Cooper certainly made the most of his single scene, nearly 100 minutes in!  He had the whole crowd up on their feet and screaming throughout ... they loved it (and it looked like he was having a blast!)  kk

Dionne Warwick Cancels Paradise Performance
Due to Payment Issue
Fans in the audience got to see the legendary performer take the stage to explain why the show would not go on and left upset, and disappointed.
Posted: Mar. 30, 2018 2:18 PM
Updated: Mar. 30, 2018 2:28 PM
Posted By: Linda Watkins-Bennett
Paradise, Calif. -- Fans of Grammy winning singer Dionne Warwick were more than a little disappointed when she cancelled a performance in Paradise Thursday night.
Warwick was scheduled to perform at the Paradise Performing Art Center in a show promoted by North Valley Productions.
Audience members say they were waiting for it to start when Warwick came out on stage with promoter Steve Schuman and said she had to cancel.
Warwick said that her good friend Sammy Davis Jr. once told her that even if you have one person in the audience, you still give it your all ... as long as you get paid. She also said this was one of only four shows in her long career that she backed out of, the other three were when she was ill.
Most people in the audience rose from their seats to give her a standing ovation.
Ticket sales were less than expected, and many people believe the event wasn not promoted properly.
Schuman told Action News Now in an email that he and Warwick's Booking Agent tried to convince her to perform, but that it was Warwick's call.  He would not elaborate further other than to say this is the first time he has experienced this in 21 years of producing shows and that ticket holders will be refunded.
While the event was to be held at the Paradise Performing Arts Center, the venue was only being rented for the show and was not involved in recruiting Warwick to sing there or promoting the performance.

Have you been following our Saturday Survey feature?  If so, you’ve seen “Simon Says,” the first hit for The 1910 Fruitgum Company, at or near the top of the charts fifty years ago today.  (Nationally, it hit #1 on the Record World Chart … but peaked at #2 in Cash Box and #4 in Billboard.)

But FH Reader Clark Besch (who collected all of those charts we’re running during this year-long series … one from EVERY single State) just sent us this unique American Bandstand countdown where, not only did The 1910 Fruitgum Company top their Top Ten Chart that week but they also performed their hit on the program!  Pretty cool!  (Frank Jeckell will LOVE this one!)  kk

Before it gets out of the top 10 (50 years ago), "Simon Says" for me to send it how Dick Clark presented the song on American Bandstand in March of ‘68 as #1 on his AB Top 10 board we loved to watch him pull the card and unveil weekly on ABC Saturday afternoon TV.


Because the band was to be on the show that week, it's an abnormal countdown, so I included as it aired and also the way the band would likely have LIKED it to play out as the countdowns USUALLY went.


First, the countdown as it aired and then as it should have sounded.

Here's the top 10 board pieced together into a photo as the camera moved from 10 to 1: 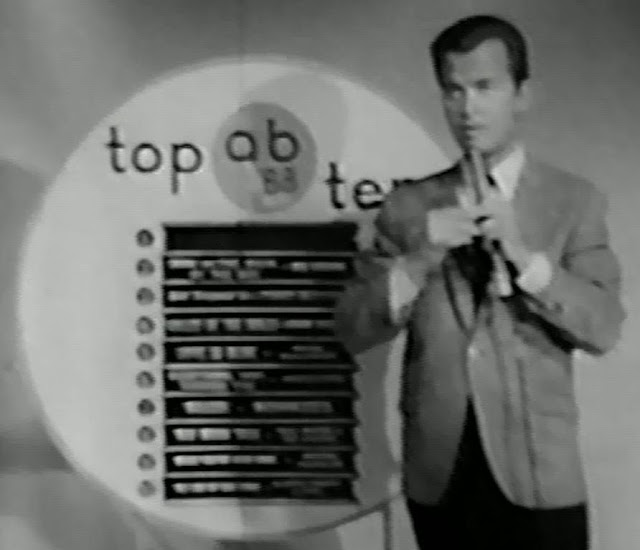 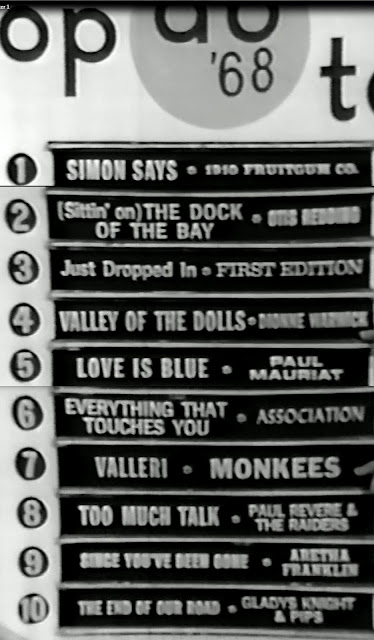 And just for fun …


And, speaking of charts …

That's a very cool SuperChart you ran on Easter as it coincides with the VERY week I was born in April, 1956!
Clark Besch 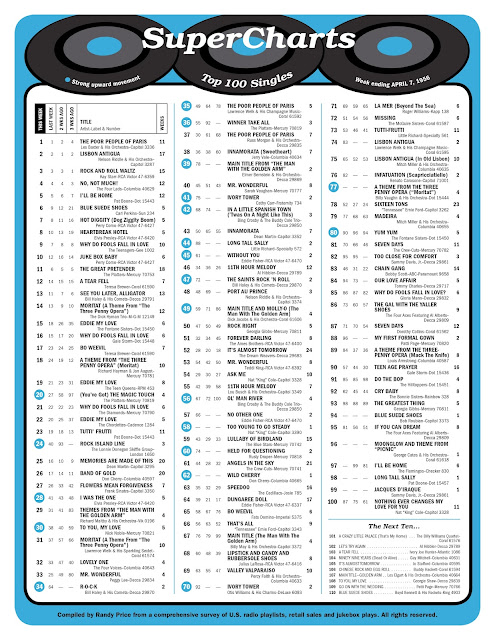 Robert Lamm told Billboard Magazine that he can envision Chicago continuing without ANY original members!!!
http://ultimateclassicrock.com/chicago-no-original-members/?utm_source=sailthru&utm_medium=referral&utm_campaign=newsletter_4572276

Songwriter Kenny O’Dell passed away last Wednesday (the 28th).  Best known for his country hits (“Behind Closed Doors” for Charlie Rich was one of his biggest), we gave Kenny the spotlight treatment last year during our 1967 Series for his OWN hit recording of “Beautiful People,” a song that shared chart-time with the slightly more popular version recorded by Bobby Vee.  (Vee’s record peaked at #22 while Kenny’s made it to #31.)  He was 73 years old.  He also wrote The Judds’ #1 Country Hit “Mama He’s Crazy” as well as the 1967 Rose Garden hit “Next Plane To London.”  (kk)

Kent,
At the end of today's FH, you mentioned Jerry Landis' recording of THE LONE RANGER. Actually it was THE LONE TEEN RANGER,recorded on Amy records. No big deal though.
Larry
My bad … rushing to get out the door again this morning!  (kk)

Love your lists, etc. Sorry to see The Ricochettes not mentioned anywhere. Very understandable as we never had a big record.  However we were in the midst of 60s music in Milwaukee, Wisconsin, and Chicago.
Through the help of disc jockeys like Bob Barry of WOKY and King Zbornik of WRIT, we received local airplay for all our records. Sad to say none of them broke nationally.
We did have exciting moments playing big concerts in Milwaukee and Chicago. We played for Ed Pazdur in several shows with The DC5, Herman’s Hermits and even opened for the Stones in Milwaukee, where they only drew about 2500 kids in 1964.
I felt the need (probably just mine) to inform you of our small part in the musical life we all treasure. Keep up the good work.
John Galobich
Kind reminds me of the Moonrakers out in Denver, Colorado ... they opened for literally EVERYBODY who came through town ... yet never made it thru to the national charts ... and this despite having several #1 and Top 5 Hits on their local charts.  Wisconsin's Robbs, I believe, had much the same fate ... and they were even featured on "Where The Action Is"!!!  (kk)


The Ricochettes had a chart 45 on WRIT. Got to #19, which is in my book. It’s an excellent 45, co-written by Brian Hyland. (On A Chicago Label, by the way!)  They also had a different 45 that was an Up n Comer / Hot Prospect on WOKY here. Thanks, Kent.
Ken Freck

Thx, Kent.  I've spoken with Galobich and have heard from him fairly recently. Our band was on a gig with the Ric's in '64 and of course they're in my books. Their main lead guitar man went on to work with Bobby Vee for many years. They reunited quite some time back (Galobich did not take part) and have been doing gigs again for several years.
Gary E. Myers / MusicGem
I didn't realize the band was back together (minus John Galobich).  Their website lists some of the acts they shared the bill with back in the day ... pretty impressive indeed!  (kk)


The Rolling Stones; The Hollies; Herman’s Hermits; Peter & Gordon; The Dave Clark 5; The Kinks; Chad & Jeremy; Wayne Fontana and The Mindbenders; The Searchers; Chubby Checker; The Animals; Mitch Ryder & The Detroit Wheels; The Byrds; The Yardbirds; The New Colony Six; The McCoys; The Flock; The Ideals; The Zombies; and The Moody Blues http://www.thericochettes.com/bio--links.html

I have had Ar Stevens (Kriegel) on the air with me.  He was the lead guitar player with the Ricochettes and later went on to front Bobby Vee's touring band for years.  I will contact John.  It would be good to hear his stories.  They had some good records.  Come In My Love (Out Of The Rain) on Quill records was my favorite.
Thanks, Kent.
Phil Nee
WRCO
Well, we've certainly mentioned The Ricochettes now, haven't we!!! (kk)


Robert Miller’s Project Grand Slam opened for legendary-rocker Edgar Winter Friday night at the Paramount Hudson Valley Theater in Peekskill, NY.  Miller’s PGS will also open for smooth jazz star Boney James April 11 at the Count Basie Theater in Red Bank, NJ and April 12 at the Mayo Performing Arts Center in Morristown, NJ.
They are currently represented on the charts with The PGS Experience (SONY-RED) and will record their next album in April.
David Salidor 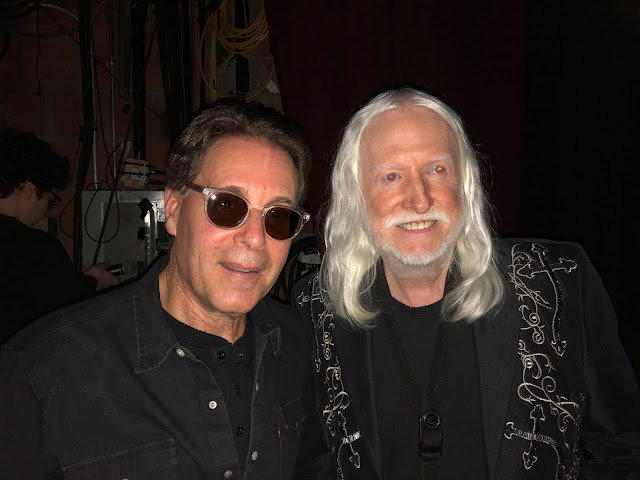 
Kent;
Wadda surprise to see my not so smiling face in the Pat Campbell story about the YARDBIRDS AT THE Rock River Roller Palace in Rockford on 12-11-65. I’m the guy with the glasses and I’m not smiling because I just slogged thru that snow storm from Chicago and will have to re-slog my way back to Chicago that night!
Clark Weber 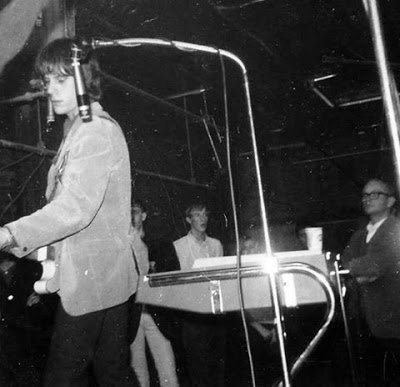