Hi Kent-
ELO is performing in Minneapolis this evening!
So bummed I won't be attending, but most of the guys in ELnO, the tribute band I play in, have super nice seats for tonight's show!
A few days ago, the Minneapolis Star Tribune newspaper ran a story about ELO's upcoming  visit to the Twin Cities, and featured a photo of our band!  That's my '72 Gremlin, and me in the driver's seat ... and yes, we ALL  wear Jeff Lynne wigs and shades whenever we play. Such fun music, and the crowds love it!
Mike Lane 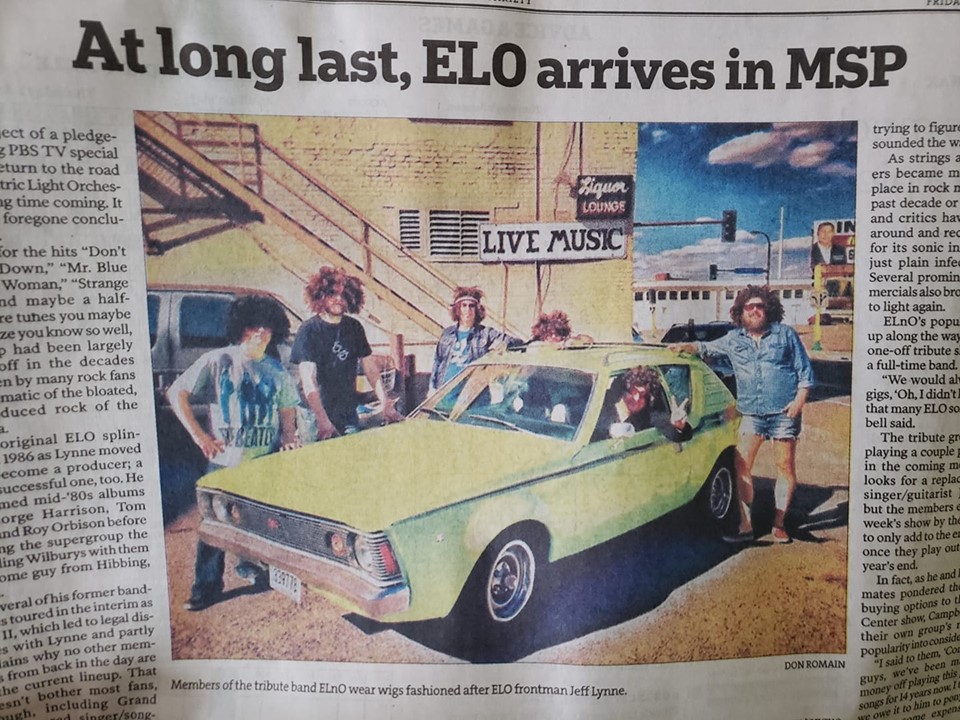 How cool is that?!?! Congrats!
We're going to the show here in Chicago tomorrow night ... and we can't wait.  Last year's concert was absolutely one of the best shows we've ever seen.  (And then the tribute band The Orchestra, featuring former members of the various incarnations of ELO, returns in November (the 21st to be exact) to perform at The Genesee Theatre ... and we're hoping to go to that one, too!)
Just can't get enough of that Jeff Lynne music!
I don't know if you guys tour or not, but if you're ever heading out to Chicago, please let us know as we would love to check it out!  (kk)

kk:
Every morning around 6:15 AM on WCBS-FM they have a "BRAIN BUSTER QUIZ."
Today's question:  Identify This Person
1 - Wild Fire
2 - Casablanca
3 - Boat Movie
Identify this person.
Why, it's the birthday boy himself, Scott Shannon!
1 - He had a group called Wild Fire.
2 - He worked for Casablanca Records.
3 - He said we don't need to know about Boat movie.
We should check into this one.
FB
Happy belated birthday to our FH Bud Scott Shannon!  (I don't know anything about the boat movie ... and I doubt that he'd tell us!!!  lol)
Light the candles and get ready to sing!
(Wait ... better grab that fire extinguisher first, just in case!)
Happy Birthday, BossJock!  (kk)
Frank also sent us this:
Someone Call Mark Lindsay: Quentin Tarantino’s “Once Upon a Time in Hollywood” Soundtrack Revives Paul Revere and the Raiders
https://www.showbiz411.com/2019/07/25/someone-call-mark-lindsay-quentin-tarantinos-once-upon-a-time-in-hollywood-soundtrack-revives-paul-revere-and-the-raiders?fbclid=IwAR3cff1ah0iDtnNDV_ARJ73lLE0sH4a3fgRv4WcXBQ792CeaYnR-S3fqv7U
That's a KILLER soundtrack!  (Most of Quentin Tarantino's movies feature an amazing array of music.)
This is something else we're hoping to squeeze in this weekend.  (Between ELO on Saturday Night and an Ides Of March live video shoot on Sunday, this weekend is jam-packed musically ... but we DEFINITELY want to see this movie ... stat!  It's already receiving rave reviews ... and received a seven minute standing ovation after a special screening earlier this week.  This is gonna be a hot one, folks!  (kk)
Hi, Kent -
Since you mentioned that Gary Strobl is a reader of this blog, I thought I might toss in a hello to him and show off a bit of his great artwork.
On September 6, 2014, I proudly wore one of his NC6 shirts to the Route 66 car show in Berwyn, where I first met my friend, the incredible Pam Pulice (in the background of the pic) at Dick Biondi's booth.
I bought that shirt at the Chicagoland Record Show in Hillside in 1983, when they brought in all of the local Chicago bands and set up tables so the guys could sign autographs and meet the collector crowd.
Every Chicago area group you could name, big and small, from the NC6 to the Buckinghams to the Ides and the Flock were represented there. Mike Bush filmed the show, and Bob Sirott reported it for WBBM-TV.  It was a blast!  It's on YouTube at: https://www.youtube.com/watch?v=B505M0mpFnU
Mike Wolstein
Yep, I was at that convention and it was incredible.  (The precursor to The Cornerstones Of Rock and all the Rock And Roll Roots CD release parties I guess!  Mike Bush did a hell of a job putting that all together.)
We've run this clip several times in the past so I'm just posting the link today ... but if you're a fan of Chicago music from the '60's, you've got to check this out (in the unlikely event you haven't already watched it a dozen times like I have!!!)
I've known Gary Strobl for 40 years ... GREAT guy who used to make all kinds of fashionable rock t-shirts back in the day.  (I've worn quite a few of them myself over the years!)
He's been out in LA for quite a while now ... but I hope we get a chance to visit on his next trip home to Chicago.  (kk)
>>>How can we possibly NOT give this guy a copy of Mark’s new book, Supreme Glamour?!?!? (kk)
Really?!
That would be so . . .  ah . . . Supreme!
CB ( which stands for "Celebrated Book!" )