Here's another “smiler” I got from Chuck Buell yesterday …

Yep! It's Another Monday! 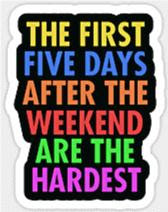 Actually, I'm just wishing that you have a Spectacular Week!

I think what happened is that after the Sullivan show, the agents in New York could see an opportunity to get close to the next super stars and brought their acts in to be a part of the excitement, and maybe get on the show. Murray the K was there asking me if I could get him into their suite for an interview. It was chaos.

None of us realized the logistics would be so difficult because of the weather. Also, I think Brian Epstein and The Beatles were surprised at the huge reception they received from the American fans. They were not prepared for what was about to happen to them. They didn’t know it at the time, but they didn’t need opening acts, it was just how things were done back then. After that show, there were never any opening acts.

In my book, From Cabbagetown to Tinseltown, I go into a lot of what happened with my conversations with Brian Epstein when I did the British tour in 1963 with The Beatles. He had a plan and it worked.

Actually, for all of their American shows, The Beatles always had opening acts … not big names, necessarily, but during this era, their entire performance only lasted 30-35 minutes … not like the full-blown concerts of today.  They were pretty much on and off stage in a flash, performing their set with very little variation or kibitzing between songs.

Over the years, The Ronettes, Cannibal and the Headhunters, Bobby Hebb, Bill Black’s Combo, The Cyrkle, The Exciters … to lesser-known acts at the time like Brenda Holloway, King Curtis, The Remains to Sounds, Incorporated (who did the majority of The Beatles’ shows here in The States.)

From a report covering The Beatles’ First US Show … 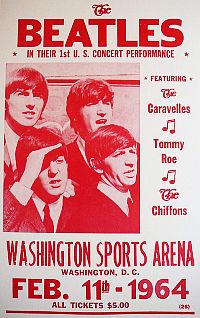 Three groups were advertised to perform as opening acts that night – including the girl group, The Chiffons, and also Tommy Roe and The Caravelles. However, an East Coast snow storm prevented The Chiffons from getting to Washington.

Although the existing historical record is unclear about which groups actually performed that night as opening and/or intermission acts, Tommy Roe reports that he was there, and performed three songs – “Sheila,” “Everybody,” and “Carol.” Also reportedly appearing that night were Jay & The Americans, The Righteous Brothers, and The Caravelles. The opening acts were quite good, according to some in attendance that evening.

With no documentation, photographs or video content, I think we just have to go with “majority rules” on this one.

Ironically, The Beatles’ performance was filmed by CBS and then released in theaters as a Closed Circuit, Pay-Per-View showing … but for theater, they were paired with concerts by The Beach Boys and Lesley Gore, both of whom had absolutely NOTHING to do with the Washington, DC show!  (kk) 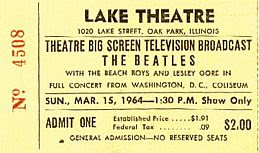 It is ESPECIALLY cool to see a ticket from our very own Lake Theatre, right here in Oak Park!  (kk)

Meanwhile, here's a fun Q&A luncheon with Jay Black from that same B103 interview, just before his 70th birthday …  https://www.youtube.com/watch?v=NTFP_BfG6pg

With all the shows I’ve seen over the course of a lifetime, Jay Black is one that I regret never having seen live … watching some live clips this weekend, it looks like I missed a VERY entertaining night of music and laughter.  Again, even well into his 70’s, Jay never failed to entertain those who came to see him.  He LOVED to perform.  (kk) 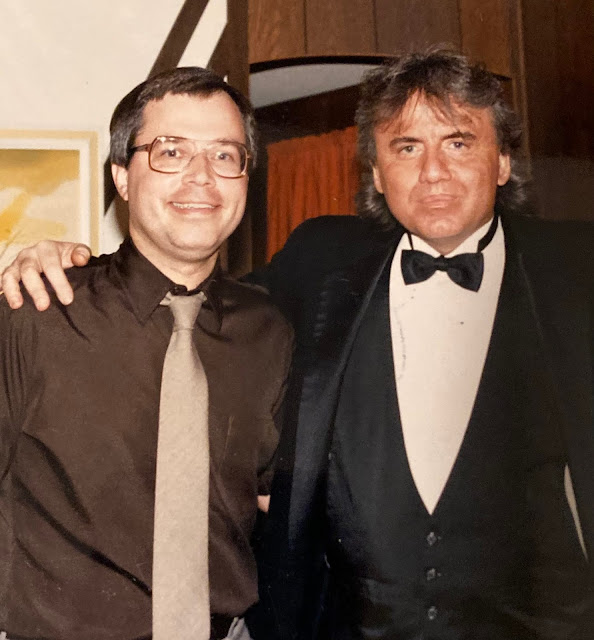 What would possess somebody to deliberately go out and deface the Buddy Holly statue in Lubbock, TX?  But that’s exactly what somebody did …

As to the new song by ABBA, I’m just not a big fan anymore.

This sounds like Waterloo backing (slowed down) and Andrews Sisters-type delivery vocally.  Just my take on it.

I like it.  New ABBA sounds just like OLD ABBA because this track is, essentially, old ABBA!  I’m curious to hear the rest of the album … but I like what I’ve heard so far.  (kk)

Meanwhile, The Dave Clark Five’s US debut album, “Glad All Over,” is being reissued on white vinyl in a remastered version that was overseen by Dave Clark himself.

Please send me your "fascinating newsletter" as referenced on Dwight Rounds' website AnimalstoZombies.com.

I look forward to becoming a regular reader, and at least an occasional contributor.

I currently live in Long Beach, CA, although I grew up in the Steel City - Pittsburgh, PA, just a stone’s throw up the hill (there are hills everywhere in the Pittsburgh area) from the home of the Vogues, who hailed from the small town/suburb of Turtle Creek (great name, huh?), PA.

Speaking of stones, I just saw The Rolling Stones in concert for the very first time ever - in LA last week. They were sensational, and still bring it!

Best regards, and glad to make your acquaintance!

Welcome aboard, Nick … you’ve got a WHOLE lotta catching up to do!  (lol)

And, if you’d like to prepare a complete Rolling Stones concert review, I’d be happy to run it!  (kk)

Frank B sent us this Facebook Post from Mark Lindsay, correcting the misinformation circulating about next year’s Happy Together Tour …

A big head’s up, kids - I suppose it’s to be expected after Covid caused Happy Together shows to be re-scheduled, re-re-scheduled, and even re-re-re-scheduled, but we’ve just become aware of several venues advertising a lineup for 2022 including ME. That is INCORRECT info and I’ll be sending off an email to my agent shortly so that it’s fixed. I have no idea who’ll be on the 2022 tour, but it definitely will NOT be me.

Lindsay announced last year that he was foregoing touring for the near future, trying to get his mind and body into a healthier state.  (Mark had heart issues a couple of years ago as well.)

I’m not sure why any theater would be posting erroneous information when the CORRECT information exists … but we’re passing the info along as a Buyer Beware service.  Mark Lindsay will NOT be part of the 2022 Happy Together Tour.  (kk)

>>>To me, "Aquarius" is just too much of a saccharin overdose of cosmic hippieness!

CB (which stands for "Curmudgeon Boy!")

>>>Well, on this one, I think you’ll find that you’re probably in the minority.  Not only did it top the charts for five weeks back in 1969, but it’s still very popular with oldies radio and oldies fans in general.  (kk)

So, I did a little guesstimation on how many times (minimum) I must have played that song on the “CB Radio Shows” from its initial status as a “Pick Hit of the Week,” its Rise UP the Chart, Domination of its Five Weeks of Number One Position, and its Descend Back down. I calculated roughly somewhere around 115-120+ times in a short, concentrated 11 to 12 week period alone!

We all have songs that are not our favorites and when one has to play a lesser-liked one multiple times a day, for weeks on end, for on-going months, it can become like “too much ice cream!”  Brain Freeze!!

(I didn’t include the gazillions of times I must have played it afterwards over the years as it solidified its rightful place in Contemporary Music History as a “Recurrent,” “Golden Oldie,” “Memory Maker” or became Enshrined Forever as a Major Hit in the “Forgotten Hits Archives!”)

I’ve often wondered about how torturous it must have been having to play “the hits” a couple of times in a four hour shift when you didn’t especially LIKE one of those hits.  (I guess I just figured that these instances became much-anticipated bathroom breaks!)

And, of course, some of these songs became instant button-pushers for us out driving around listening to our favorite Top 40 Hits stations. Making me think, “Yeah, these songs may have been earning points for airplay … but how many people out there were actually LISTENING to them?!?!?”  (kk)

File this under “Totally Unnecessary Remakes” …

It’s Ringo Starr’s new version of “Rock Around The Clock,” sent in by FH Reader Frank B.

Meanwhile, congratulate The Beatles on another hit album …

The “Let It Be” reissue box placed at #5 on Billboard’s brand new Top 200 Albums Chart … and actually was the top selling album of the week.  (Roughly translated, between sales, streams and downloads, the combined variations of the reissue set sold about 55,000 copies … 48,000 of which were physical, actual CDs … ‘cause that’s the way we old timers roll, ya dig???)

I made it thru the complete box over the weekend and have to report that overall, I am somewhat disappointed by the content.  There was just SO much more out there available that has never been commercially released that would have been FAR more interesting to hear.  (Do we really need four or five versions of “Don’t Let Me Down,” “Get Back,” “Let It Be,” “Two Of Us” and “I’ve Got A Feeling”???  Heck even the throw-away track “Maggie May” makes three appearances on the box set!)  This is especially disheartening when one considers that the original FAST version of “Two Of Us” isn’t even included at all.  (I especially like the bit in the original “Let It Be” film when Paul goes into his Elvis impersonation during the run-through of this song … but you won’t find it here!)

Nor will you find any of the lengthy jams the group did to warm up for each session, revisiting songs from their earlier incarnation playing the Hamburg clubs … LOTS of ‘50’s and early ‘60’s tunes that they would use to loosen up for a session.

For years, The Beatles insisted that what was in the vault would STAY in the vault.  From what I’ve seen thus far (meaning everything released AFTER the well-picked gems from the “Anthology” series) probably should have stayed there.  I see nothing new and exciting here … and even less so since the “Let It Be Naked” album release has already shown us the stripped-down, original intent of the band.  (kk)

Frank B also sent us this one … 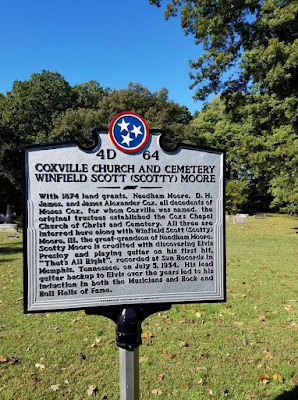 This was found online by Scotty's nephew Lee. It’s likely a recent addition to the registry of landmarks. Photo credit unknown.

An interesting Billy Joel concert review from the show he did in Austin, Texas, this past weekend …

And another Chuck Buell Production …

(In the interest of full disclosure, he produced only the overall Program Presentation Concept … meaning just its Intro and Close.  kk)