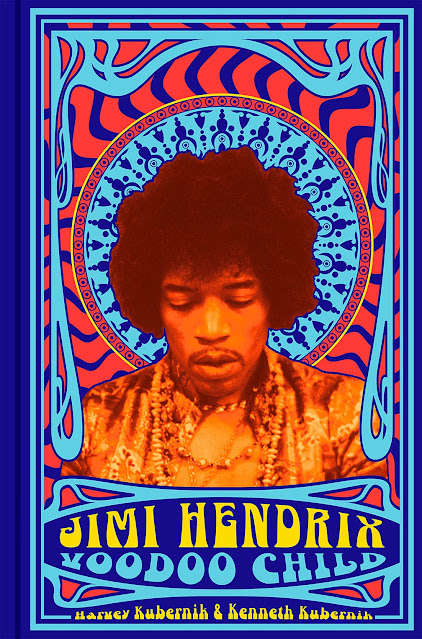 We're hearing nothing but the most amazing things about the new Harvey and Kenneth Kubernik book "Voodoo Child," their tome to the late, great Jimi Hendrix.
Here are just a few we've already seen this week ...

Rock journalists and historians Harvey and Kenneth Kubernik admit early in their latest collaboration, “Jimi Hendrix: Voodoo Child,” that the number of books devoted to the all-too-brief but influential career of the rock icon number in the hundreds.

What distinguishes this latest tribute is how the Kuberniks step back and allow fellow musicians, associates and friends tell the story of Hendrix and his music.  Following an introduction that outlines his four-year career, the Kuberniks trace the early years of James Hendricks as guitarist for The Isley Brothers, Little Richard and his own Jimmy James and the Blue Flames.

Then Chas Chandler, bass player for The Animals, left the group in the mid-1960’s to become a manager/producer and convinced the promising young black guitarist to follow him to London.  The enthusiastic audiences in London encourage Hendricks to incorporate influences of psychedelics and science fiction and transform into Jimi Hendrix.  With Noel Redding on bass and Mitch Mitchel on drums, he became The Jimi Hendrix Experience.  He then returned to the US for his groundbreaking performance at the 1967 Monterey International Pop Festival, where he doused his guitar in lighter fluid and then set it on fire.  Two years later, The Jimi Hendrix Experience was the closing act at Woodstock, where he performed his unforgettable rendition of “The Star Spangled Banner.”

Through these years – and later as The Experience changed sidemen and became The Band Of Gypsies – the Kuberniks include reminiscent and comments from band members, fellow musicians, performance attendees, and surviving family members.  Notable entries include Roger Steffen’s observations of Jimi and the Viet Nam War, and the odd paring of The Jimi Hendrix Experience and The Monkees.  Additional treasures are included in the Appendices.  The Kuberniks trace the jazz influence on Hendrix and a proposed appearance of Hendrix with Miles Davis in what, per the chapter’s subtitle, was truly “A Marriage Never Consumated.”  There is also a chapter devoted to the various Fender Stratocasters, Marshall Amplifier stacks, and other equipment used to create the sounds on his records and live performances.

Like earlier Kubernik collaborations (most notably, “The Story Of The Band:  From Big Pink To The Last Waltz”), the book is generously illustrated with photos … here by Henry Diltz, Guy Webster, and others … along with reproductions of posters and other memorabilia.  A short list of recommended additional reading is also included.  Most highly recommended.  As surly as the music of Jimi Hendrix is essential to all rock fans, “Jimi Hendrix: Voodoo Child” belongs on the bookshelf of anyone wanting to know more about Hendrix and his continuing impact.

And this from Jeff Gold ...

Harvey and Kenny Kubernik have told Jimi Hendrix’s story in a fascinating and unique way — through the words of those who knew him, worked with him, and saw him live.  I’ve read countless Hendrix biographies, and at this point, couldn’t imagine anyone coming up with a new approach, or much new information.  This book succeeds on both fronts and takes an entirely new approach to telling Jimi’s story.  Well done!  Best of luck, Harvey — I think you’ve outdone yourself with this one.

Author of 101 Essential Rock Records, Total Chaos: The Story of The Stooges /

Just published, "Jimi Hendrix Voodoo Child" by Harvey Kubernik and Kenneth Kubernik is a volume to buy for both yourself and your favorite music fan friends. The authors really did excavate brand new material about this icon, with over 150 interviews over their journalist decades with those who personally dealt with the man, fellow musicians, sound engineers, tour managers, record label personnel, venue employees, opening acts, photographers, friends, learned fans and associates. Zero rehash. They also cherry-picked the best photos that heretofore haven't been seen (or seen beyond mega-obscure sources) like the fans jumping in the (onetime) Hollywood Bowl reflecting pool to hippie dance with Hendrix cracking up onstage 9.14.68; or a fan riot spilling onstage in Cleveland 3.26.68. Have you ever seen fan Thomas Harrison's sharp Instamatic pix of Hendrix 5.25.68 onstage in Rome (the only camera some of us teens could then afford?) They're here with hundreds of others. It's a meaty volume of close to 300 pages, but in a sufficiently handy size to remain nicely portable. With over 300 Hendrix books heretofore on the market, all readers will glean new info from this volume, whether casual fan or avid completist. Some of his peers offer fresh, surprising views, as with Moby Grape's Peter Lewis musing on a rarely explored P.O.V. based upon observation of Hendrix personally, or one by Iggy and The Stooges' James Williamson whose insight here might lead one to LOL. I have my extra copies already for worthy holiday gift recipients... 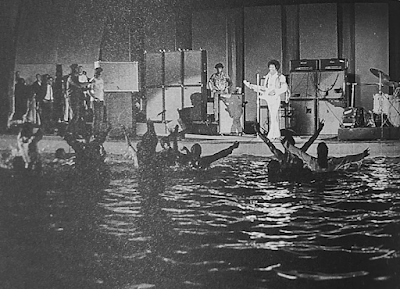 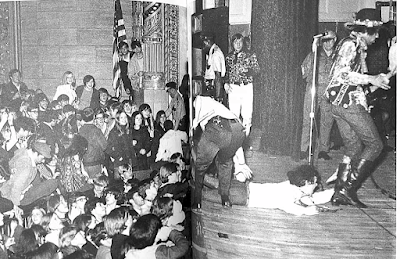 As I confessed right there on Page 188, as a wee young Canucklehead the first 'real' concert I ever attended – make that snuck in to, so my parents wouldn't find out – was the Jimi Hendrix Experience at Toronto's Maple Leaf Gardens in May of '69. And the first real – as in authoritative, illuminating, expertly sourced yet above all extremely entertaining book I have ever read on the sheer majesty which was, and certainly remains everything Hendrix must surely be Voodoo Child.

Most colourfully presented – the literary equivalent of first encountering that Axis album on headphones, dare I say – it not only charts the life-long saga of this man's art and artistry, but via an above-stellar cast of friends, followers and associates spins those too-often ignored stories behind the storied: Each will absolutely reveal, thanks to the skilled stewardship of Harvey and Kenneth Kubernik, a treasurous trove of facts and fancies which ultimately explain just why we are still listening to, and learning from, the music and magic Jimi somehow created over a half-century ago.

And this, from our very own Ken Voss (who publishes the outstanding “Voodoo Child” / Jimi Hendrix newsletter … email me if you’d like to receive the latest copy … is equally complimentary …

These days, it is rare to pick up a Jimi Hendrix biography and feel that there is something new to add.  Brothers Harvey and Kenneth Kubernik have proved me wrong with “Jimi Hendrix: Voodoo Child.”

The problem with biographies that have been published over the years is they have rehashed time and time again historical details of Jimi’s life and music, written by third party authors who try to analyze and dissect the information they’ve compiled from various sources.  As the Kubernik brothers are part of the Hendrix generation and been journalists since those times, they take a fresh look, allowing the people who were there and part of Jimi’s life, the scene and the era, to tell the story.

In deciding to pursue another book on Jimi Hendrix (there have been over 300 books previously done), “We made a pact that his music and recording journey would be organic and the primary focus and goal was to deliver a study like never before,” says Harvey.  They’ve accomplished that task.

The Kuberniks take the position that those who will be reading the book are generally familiar with the basic biographical facts of Hendrix’s life and music.  So they don’t dwell on that.  Harvey Kubernik is an entertaining writer who doesn’t dwell on the factual minutiae.  He opens each chapter with a brief overview, an analysis of the time or place in his lexicologist writing style, putting things in perspective, and then they let those who were there tell the story through the soundbites they’ve compiled through their years of rock journalism and interviews.

“Often in their dialogues, the interview subjects themselves would bring up Jimi,” Harvey says.  “If you saw him there is sometimes a sort of bond established.  If you talk music with anyone, the conversation often leads to Jimi.”  As a journalist, it was helpful to archive Hendrix material.  Over time he found “some people and friends would meet people who had unheard Jimi stories never published.  And they would steer them to me or Kenneth.”

The book features interview segments from more that 150 interviews over the years.  The artists who knew Hendrix, saw Hendrix, influenced and inspired by Hendrix, or were opening acts for The Jimi Hendrix Experience.  There are interviews with record label executives, tour managers, sound engineers, venue personnel, poster artists, other writers and journalists.

Through their years of interviews, the Kuberniks have compiled insights and inside stories about Hendrix, put things into perspective, and give us a more realistic view of the concerts, the scenes and the scenarios that were part of Jimi’s life.

Even for the most hardcore Hendrix disciple, the Kuberniks have unearth so much more new information and so many personal insights.

There’s personal commentary, such as Eric Burdon talking about Jimi’s appearance at Monterey.  “It was his homecoming,” says Burdon.  “I have always felt that it was the Launchpad for Jimi’s career.  It also heralded the end,” talking about the destruction of his guitar.  “How many times can you set your guitar on fire … and where do you go from there?”

There’s excerpts from an unpublished manuscript by Soft Machine bassist Hugh Hopper, a diary of the time Soft Machine was touring with The Experience.  There’s a lengthy interview piece with Electric Lady Studio Designer John Storyk.  There are stories of Hendrix hanging out and jamming at a club called Thee Experience in Lost Angels, when usually all we hear about is The Whisky A Go-Go gigs.  And so much more.

When it comes to a chapter such as Woodstock, you hear from Mel Lawrence, who was director of operations at the fest; photographer Henry Diltz; and perspectives from Eddie Kramer and Billy Cox.

As stated from the beginning, “Wow!”  It’s a look at Hendrix unlike what we’ve seen before.

I just never expected to be this inundated with book commitments at the end of the year!!!)

My favorite thing about Harvey's books is the way he lets others who were there tell the story by way of archival commentary coupled with 20/20 hindsight to paint the most accurate picture of what life was really like during this era.

Having also researched our own Jimi Hendrix series many moons ago, I know how much material is out there (and how exhaustive it can be) ... so it is REALLY refreshing to see SO much positive reaction for what Harvey and Kenneth Kubernik bring to the table with their new volume.  Can't wait to read it!  (kk)

These guys hit the ball like Billy Williams' sweet swing with the Chicago Cubs.

This book will be generating reviews for many years.  Jimi is more popular than ever.