Our Wednesday started with some very sad news ...

After celebrating our very first JOEL WHITBURN DAY on Tuesday (Joel's Birthday), we learned Wednesday Morning that Joel's wife Fran had passed away.

Fran was paralyzed after a parasailing accident several years ago ... and had been in poor health recently.  Such a sad year for a family that brought us so much joy over the past 50+ years.  (I will forever regret not making the trip up to Menomonee Falls, Wisconsin, to visit with Joel and tour his incredible Music Vault ... both of us speculated how much "The Two Frans" might enjoy each other's company, even if it just meant a trip to the mall while us two Record Geeks talked shop.  Every year there was always a reason to put it off ... all on my end as Joel's invitation was an open-ended one to come up ANY time and tour the facility.)

I will always remember her kindness in my handful of encounters with her ... initially at some of the recording sessions for "Rumours" at Larabee Studios in Hollywood, record shopping with her and beau Dennis Wilson at Tower Records, and even at my father's office, who was a stock broker. She really laughed when I mentioned, "If I knew you were on Wilshire and La Cienega talking financial investments, I would have brought my Chicken Shack LP to autograph!"  As a weekly columnist for UK's "Melody Maker," she was always delighted to discuss UK music and we made efforts to find a great Indian restaurant in town. Thankfully, George Harrison and Ravi Shankar recommended one literally next door to Doug Weston's Troubadour.

One more Joel Whitburn info tribute ...
I bought my first Record Research book in 1970 -- his first Billboard chart book covering all the chart records for the previous 15 years of 1955-1969.  I was thrilled.  We had many Billboard issues by then, but at age 14, I now had ALL the chart record positions for my entire life!  I had that book at school and every afternoon study hall in Dodge City, Kansas Jr. High, you could see me studying ... the RR BOOK!

A chart fanatic since I got my first WLS Silver Dollar Survey in 1962 at age 6, I was finally a church member by 1969 and now I had TWO Bibles!

Over the decades, I have bought so many RR books, much like many of you.  After the first 1970 book purchase, I received the below flier for Book 2, which I also bought.  I sold my first book a couple years later for $10 to a high school buddy in 1974.  It had become unmanageable due to pages pulled out due to overuse and I had a newer version now.  The second one was an inch think and pages would come out of it in clumps, due to a more rigid glue spine.  As I kept buying books, I started to hold onto Joel's fliers he sent to me.  I pulled them out and there must be 30 or more here.  Don't ask me why ... I have no answer.

BELOW is the flier I got prior to Book 2 (1972) and I did buy it.  It's fun to see Joel now as a "boy" of 33 years!  I love these photos!  So cool to see photos of him with his Billboard Hot 100's laid out in front of him, his turntable and headphones on, adjusting his tuner.  Also sifting thru his 45s and on the phone talking while checking a chart position.  I could probably be seen doing all these same things 50 years later, easily!
As mentioned below, that first book was $50!  I think I bought the new Gavin book pre-pub for $60, so you cannot say RR is gouging us, I guess! With today's inflation, $50 in 1970 is worth $384 today!  (Maybe I should not be telling Paul that!

)  As I remember the first book, it was a basic chart peak song listing with no frills other than label and number, maybe alphabetized at end(?)  By this flier, Joel had lots of books already and was starting his new "added features" things! 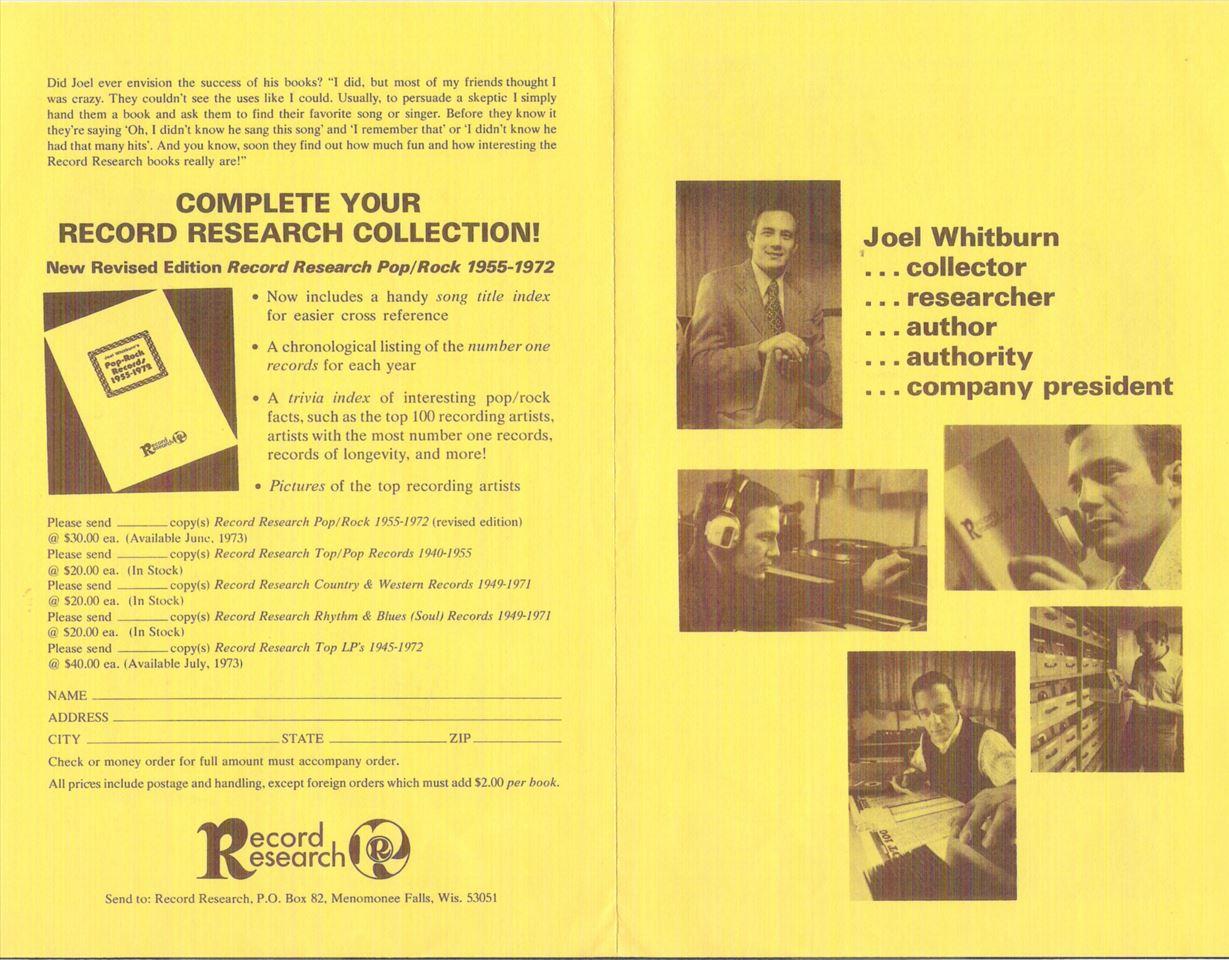 This thing above says Joel's collection of just 45s is worth over $50,000 -- again, $384,000 today.  Of course, back then, he was still missing a lot of his collection and I would increase mine as well exponentially, too.  Paul Haney says he started working at RR in 1992.  The below is something Joel started adding occasionally to his mail outs.  He had a WANT LIST and he would trade books for records he still needed to complete his collection.  THIS is the oldest flier with his list I could locate, from 1991 before Paul worked with RR.  How many do YOU have that he needed 31 years ago?  (Just perusing thru above, I notice a few I have today, but not many I had back then.  I think I have eight 45s on the list above , just at a glance ... and three more in the revamped list below that was within a year of the above in a new flier.
Note that the phantom "D.A." single is one of those listed.  $100 bounty on its head!!!  Paul, did you collect it?? 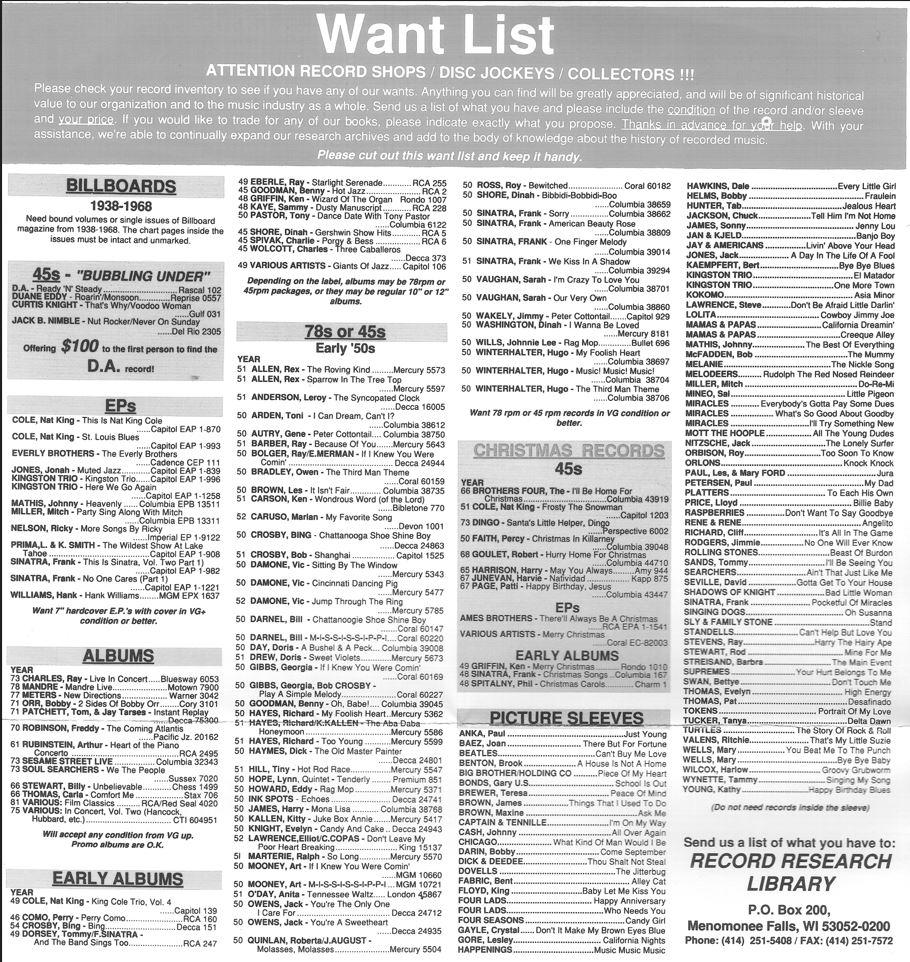 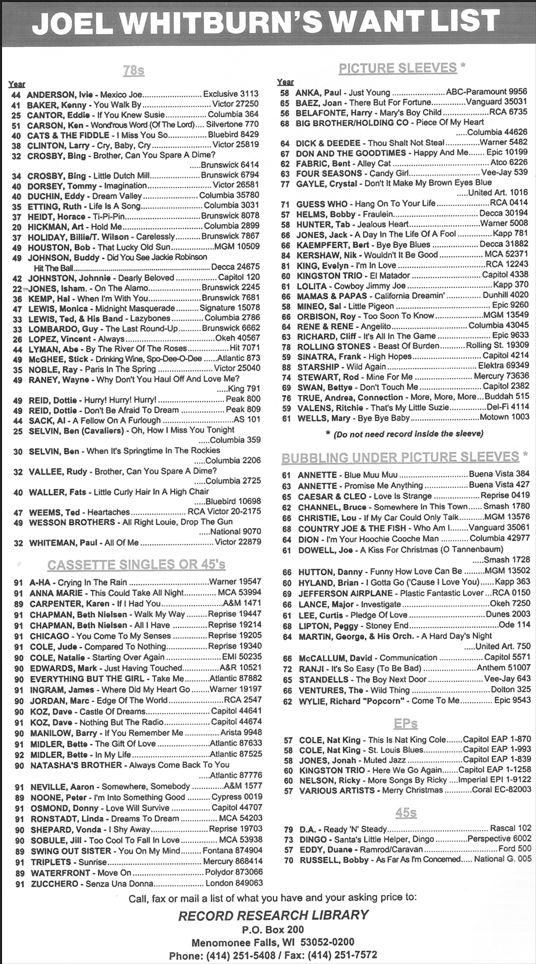 I had forgotten all about when Joel used to send out copies of his Want List to all of the people who bought his books, trying to fill in all of the gaps in his collection!  This early one shows several titles I could have helped him out with over the years!  lol  (Problem was, I didn't want to part with MY only copy either!!!  And, as I recall, he was offering top dollar for any and all records that we fellow collectors could come up with.)  It was all about the love of the chase back then ... and trying to build the most complete collection imaginable.  As his book topics grew, so did his library, expanding to cover ALL genres of music that Billboard covered.  This even included VHS video tapes and such when that market exploded.

His first want list he had printed and sent out I cannot find, but maybe because I had TWO on it (1980's flier, likely.)  I know I had never seen him ask for any records and when I had two on the first list, I contacted Joel and we made arrangements for a new book for the two pic sleeves 45s he needed.  It makes me feel good to know that two of MY pic sleeves are in Joel's' collection today.
They were: 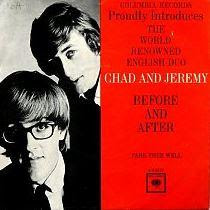 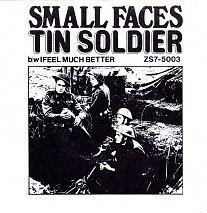 I have now replaced the Chad & Jeremy one, but not the WHITE cover Tin Soldier variation which he expressly wanted. 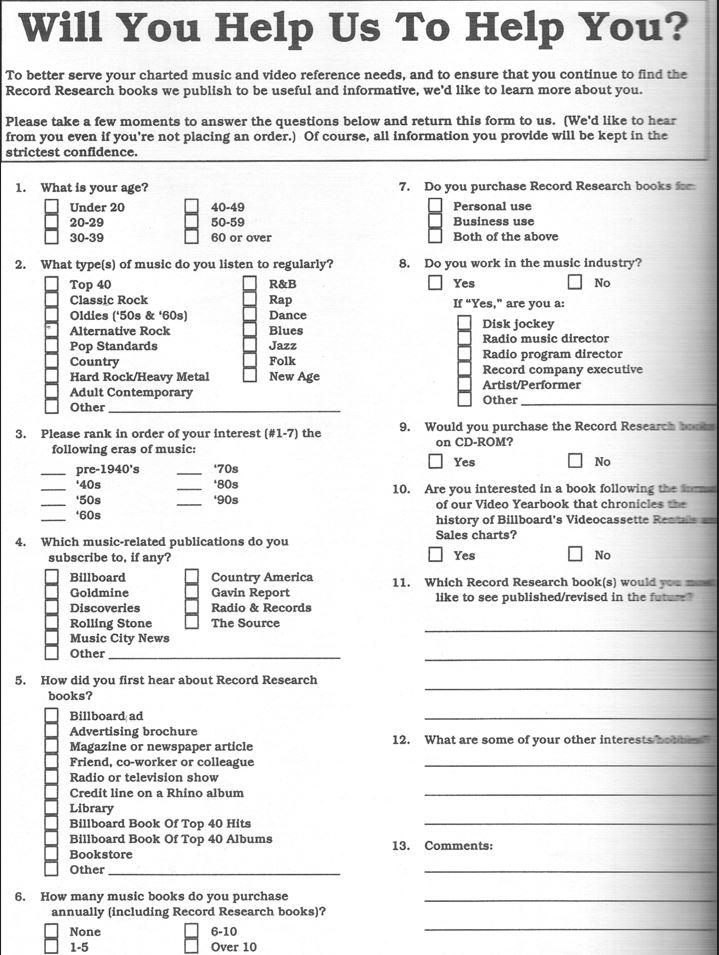 Finally, a Christmas 1992 flier color photo wishing buyers a Merry Christmas!  30 years ago!  I am guessing Paul Haney is in here as this would have been his first year with RR (?)
Which YOUNG MAN are you, Paul????
Clark Besch 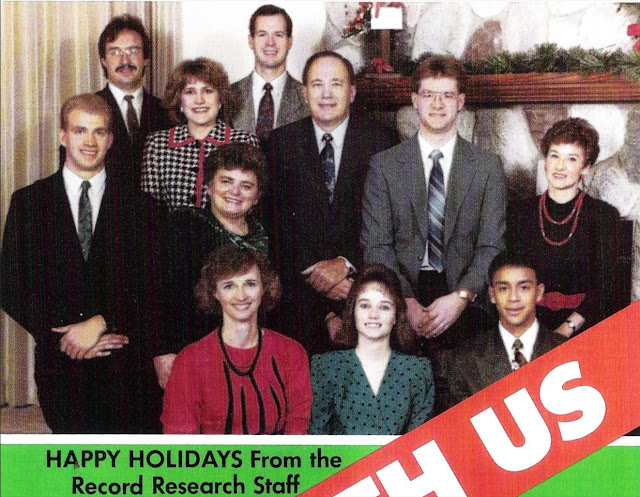 Boy, SO much of this stuff I had but just never held on to ... never enough space (and no idea that I'd ever be referring back to any of it way back then!)
I don't know HOW on earth you've been able to organize all this stuff to know ... and FIND ... what you're looking for.  I only know that I could NEVER have done it!
Thanks, Clark ... LOTS of memories these past few days.  (kk)

An All-Star Cast has recorded a version of Tom Petty's hit "I Won't Back Down."  Featuring Country Superstar Blake Shelton on lead vocals, the track also includes Joe Walsh on lead guitar, along with fellow Eagle Timothy  B. Schmit.  You can hear the track here:
https://goodnoise.io/#New-drop

Today's planned feature (another installment of Henry Diltz's Journal) will run on the site tomorrow (Friday, December 2nd) due to the impromptu rescheduling required after we received the sad, sad news of the passing of Fran Whitburn and Christine McVie.

And, we also want to let you know that this Saturday we'll be running excerpts from Phil Nee's 2003 interview with Mike Smith, lead vocalist of The Dave Clark Five.

And then on his THOSE WERE THE DAYS program Saturday Night, Phil will be playing outtakes and never-before-aired interview segments with Mike ... as well as more clip from the outstanding interview he did with David Gates.  (We ran clips from that one last Saturday!)