Plenty of chances to enjoy some Forgotten Hits moments this weekend ...
As no less than THREE radio programs will be saluting recent FH-inspired features!
It all kicks off on Saturday at Noon (Chicago Time) as Sam Tallerico takes another look back at The Super Charts from 1971 on his AWESOME Lost And Found Oldies Show ...
You can listen live here:   Listen to WVKR-FM on TuneIn
I'll be devoting Hour Number One to the February 27, 1971, Super Chart this Saturday (February 27th) from 1 - 3 pm ET http://www.wvkr.org and later at http://www.mixcloud.com/LAFOS/
Come for the hits, Stay for the misses!
Thanks for all you do to keep our music kickin'!
Sam Tallerico
And then, on Saturday night between the hours of 6 pm and Midnight (again, Chicago Time) our radio buddy Phil Nee will be counting down The Top 50 Favorite TV Themes (along with a bunch of extras!) as voted on by Forgotten Hits Readers last year!
In between you'll hear LOTS of great oldies music.
You can Listen Live to this one here:  WRCO AM FM Radio Richland Center Wisconsin (just click on the 100.9 headphones for streaming)
I will countdown the top 50 favorite tv themes plus some extras this Saturday night.  The countdown primarily runs during the 2nd half hour each hour.
The number one theme will play just before 11 pm cst so folks can hear the best of the best before they head off to bed.  (I didn't want to drag it out much than that, even though the show does air until Midnight ... so hopefully some of your readers will stick around and keep listening till the end!)
Phil - WRCO

And, all weekend long (beginning at 7 pm Friday Night ... you guessed it ... Chicago Time), Me-TV-FM will be presenting (by popular demand, I might add) an encore presentation of our Eye Tunes Weekend ... songs about eyes, vision, glasses, etc.
(You won't believe how many Eye Tunes we came up with!)
Keep an Eye (and ear) out for this one ... streaming here:
https://www.radio.com/metvfmmke/listen#.W6oi2vZRfcs
This weekend on Me-TV-FM, the EYES have it!!!
Starting this Friday evening (that's tonight!) in the 7:00 hour, it’s an encore presentation of a feature we premiered last September: An Eye Tunes Weekend.
We heard from quite a few listeners who enjoyed the wide array of songs having to do with eyes and vision (there are many more than, well, meets the eye), so we’ll do it again this coming weekend.
Rick O'Dell ... and the entire crew at 87.7 ... Me-TV-FM
Plus here on the Forgotten Hits front, we've got a brand new FRIDAY FLASH posted for you today ...
(as well as a very special Saturday post coming up that you won't want to miss if you're a fan of '60's music ... and who isn't?!?!)
And we'll also have a brand new Super Chart up on the site on Sunday Morning.
(You'll find all of that right here at forgottenhits60s.blogspot.com ... and you can view that ANY time!)
Hope you'll join our radio partners for these special programming events!

As always, thank you for your support!

You reminded us about Dick Biondi playing Beatles first song in the U.S.

Do we know who played first song composed by McCartney – Lennon in the U.S.?

I guess soon after they reversed names.

Pretty amazing that Del Shannon charted with a Beatles song here in America before THEY did … but that just goes to show you again how COMPLETELY uninterested we were in 1963.  (Now The Beatles’ version of “From Me To You” did get SOME airplay … and even charted in California.  It bubbled under in Billboard for three weeks, eventually peaking at #116 … six months later it was tossed on the flipside of the Vee Jay single “Please Please Me” and went to #41 … this despite being a HUGE #1 Hit back home in Jolly Ol’ England!)

Del toured with The Beatles overseas and saw the enormous popularity they had first hand.  (Other American acts like Roy Orbison, Tommy Roe and Little Richard saw it, too … yet even all of these artists coming back to The States telling their industry insiders about this hot new act from Liverpool that had girls screaming in the streets did nothing to motivate a U.S. record company to put any serious effort into promoting them.)

Because so many stations played Del Shannon’s version when it first came out (more out of loyalty to the proven hit maker), nobody was really interested in playing ANOTHER version of the same song that hadn’t done all that well on the charts in the first place … so The Beatles’ version was largely ignored.

By the way, to clarify one point made by Mike Wolstein in his mention of WLS being the first station here in The States to play a Beatles record, in this case it wasn’t mega-gifted promotion man Howard Bedno who got Dick Biondi to play it …

Dick told me that he was asked over lunch with Vee Jay President Calvin Carter to please, as a favor to him, give the record a spin as this group was becoming quite the rage in The U.K.  Biondi played it on his program for a couple of weeks to lukewarm response.  WLS even charted the record on their Silver Dollar Survey for two weeks, where it climbed as high as #35.  (Clark Weber told us MANY times that only The Top 20 Records shown on their chart really mattered … the rest were just the station trying out a bunch of tracks to see which ones would click with their audience.  Obviously, The Beatles didn’t … they were gone two weeks later!)  kk

Speaking of The Beatles, I just preordered a brand new book written by Paul McCartney, coming out November 2nd.

Titled “The Lyrics:  1956 to the Present,” this two volume set features lyrics to 154 of McCartney’s hand-picked songs, written throughout his entire career.

It also will feature hand-written lyrics and artifacts from his years with The Beatles and Wings, never-before-seen photos, and material dating back to his teenage years when he was just first experimenting with the craft of songwriting.

Look, too, for a new 600+ page volume spotlighting ”The Collected Works of Jim Morrison: Poetry, Journals, Transcripts and Lyrics," which will feature both previously published work as well as never-before-seen material, including unrecorded song lyrics, poetry, personal notebook entries, drawings, photos and more.  This one hits the streets on June 8th.  (2021 marks the 50 Year Anniversary of Morrison’s death in Paris in 1971.)  kk

DWI charges were dropped against Bruce Springsteen for the motorcycle incident we reported on a few weeks ago.  The Boss DID plead guilty to a lesser charge, however (consuming an alcoholic beverage in a closed area, confirming the fact that he drank "two small shots of tequila" on November 14th, 2020, at New Jersey's Gateway National Recreation Area in Sandy Hook, N.J.  After paying a fine of $540, he was free to go.  (kk)

I have always loved learning little tidbits about songs … especially as introductions when I hear them on the radio … and I heard a good one the other night on Sirius / XM’s ‘80’s Channel when they were doing their usual daily countdown of the biggest hits on that date … in this case, 1986.

The song in question was Heart’s #1 Hit, “These Dreams” … and I guess I was surprised to learn that this song was written by Marty Page and Bernie Taupin.  (How did I not know this???)

Taupin, of course, was one half of the songwriting team of Elton John and Bernie Taupin, who have written literally HUNDREDS of songs together over the past 50+ years.

Page, in addition to his own hit “In The House Of Stone And Light” (#12, 1995), also co-wrote the #1 Hit “We Built This City” for Starship, as well as the hit “King Of Wishful Thinking” by Go West and songs recorded by everybody from Earth, Wind and Fire to Barbra Streisand to Tom Jones to The Commodores to Josh Grobin.

I guess I was also surprised to learn that the track featured a rare lead vocal by Nancy Wilson … typically, it was sister Ann belting out all the lead vocals on Heart’s biggest hits … so this one was a double whammy for me … and I was doubly surprised that I didn’t know EITHER of these fun facts about a song that is now already 35 years old!!!

I mention this, too, because Nancy Wilson is releasing her first-ever solo album on May 7th … and it’s already getting quite a bit of press because of its closing track, “4 Edward,” a song written as a tribute to the late Eddie Van Halen.  (Heart toured with Van Halen in their early years.)  kk

In honor of the labels’ 50th Anniversary, Billboard Magazine has run a list of The Top 50 Favorite Songs released on the Philadelphia International Label.

Kenny Gamble and Leon Huff were already writing and/or producing hits before they started their own label to do so.  The late ‘60’s brought us the Top Ten Hits “Expressway To Your Heart” and “Cowboys To Girls” … but once they got rolling, the hits just kept on coming!

(Reviewing the list of tracks selected by Billboard Staff, I find quite a few discrepancies from the list I would make … and even the list of the most successful P-I tunes during those 50 years … but there are some REAL gems here that will never get old as well … so take a moment to review the COMPLETE list here:

(I don’t think I’m spoiling anything by saying that “Me And Mrs. Jones” by Billy Paul came in at #1.  Amply represented are The O’Jays, Harold Melvin and the Blue Notes, Teddy Pendergrass and Lou Rawls  … nice surprises include Gamble and Huff productions like The Jacksons’ “Enjoy Yourself” released on Epic Records and spot productions of The Spinners and The Stylistics.  An impressive list, to be sure … just not quite in the order I would have placed them in terms of cross-over appeal and longevity.)  kk

James Burke of The Five Stairsteps has passed away from pneumonia.

>>>Madison Square Garden is reopening this week at 10% capacity for sporting events only (at this time.)  I’m also hearing that many artists are looking into touring Down Under, where somehow, someway, Australia has seemed to have virtually wiped out Covid.  Share with us, PLEASE!!!)  But truthfully, the best of plans means absolutely NOTHING if people don’t follow protocol to get things clean FIRST so that we can all enjoy the benefits.  There are still just TOO many people who feel they’re above it all … and this will never change.  As such, even with the new vaccine, I believe we’ll be living under SOME type of restrictions and safety considerations from this point forward.  Too many stupid people out there who only care about themselves with no regard for others … and that’s a shame.  (kk)

And this and ONLY this, is the reason that it won’t work for Australia to tell us anything. Their actions are speaking louder than our words.

Just when a person thinks they have a pretty good knowledge of music and the trivia that sometimes accompany it, you open up last Monday’s edition of Forgotten Hits and read articles from Sam Ward and Mike Gentry and realize you are still in the minor leagues and have a lot to learn.  Upon reading their articles, I pretty much felt like the chimpanzee in the video sent in by Chuck Buell.  I am hoping with the continuation of reading Forgotten Hits, I'll be able to move up to "Triple-A Trivia", in a couple seasons!  ha!

There isn’t an issue that goes by where I don’t learn something new.  (Witness some of my comments above!)

I love the fact that we ALL can keep learning and discovering, despite that fact that in many cases now 40-50-60+ years have gone by since this music first took the world by storm.  Now that’s REALLY sayin’ something!  (kk)

Leaving you with a few smiles …

Remember when this group broke up? 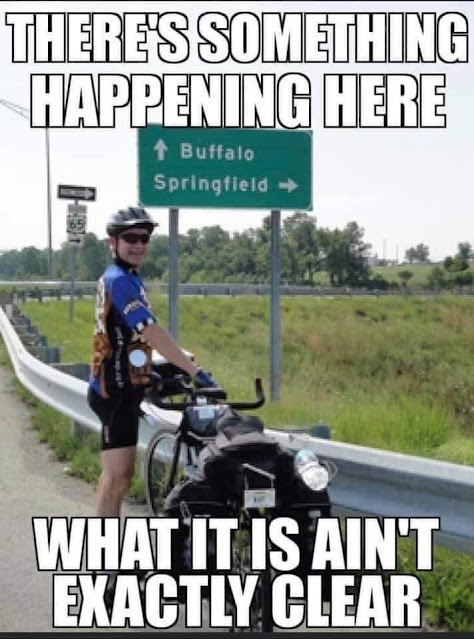 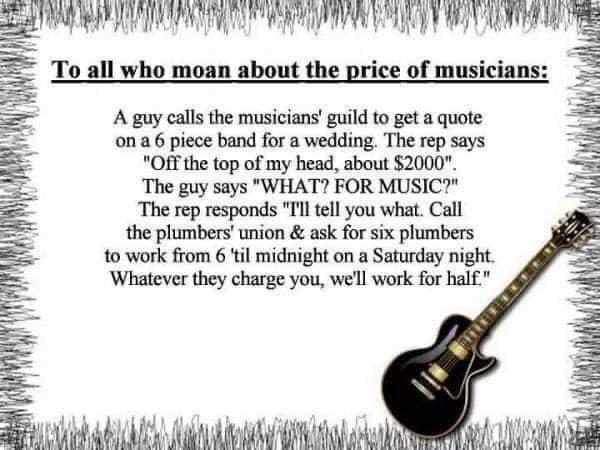