This is one you don't want to miss!

Beginning next Saturday Night, March 6th, PBS, thanks to TJ Lubinksy, will bring you a music program from 1965 that hasn't aired since ... and wait till you see this line-up of stars!

Back in the early '60's, Murray The K (yes, THAT Murray The K ... aka The Fifth Beatle) used to put on these package shows at The Fox Theater in Brooklyn ... sometimes as often as two or three times a day! ... and each performance was an extravaganza featuring some of the biggest names in music at the time.

Well, in 1965, he also put together a television special called "It's What's Happening, Baby" ... and it is THIS special that PBS will begin airing on March 6th.  (Encore performances will follow.)

Nowhere To Run – Martha & The Vandellas
Walk On By – Dionne Warwick
Mrs. Brown You’ve Got A Lovely Daughter – Herman’s Hermits
Pride & Joy – Marvin Gaye
Land Of 1,000 Dances – Cannibal & The Headhunters
You’ll Never Walk Alone – Patti LaBelle & The Bluebelles
I’m Alright – Little Anthony & The Imperials
Be My Baby – The Ronettes
I Don’t Want To Cry – Chuck Jackson
My Guy – Mary Wells
The Seventh Son – Johnny Rivers
The Way You Do The Things You Do – The Temptations
Count Me In – Gary Lewis & The Playboys
Up On The Roof – The Drifters
Stop! In The Name Of Love – The Supremes
You’ve Lost That Lovin’ Feeling – The Righteous Brothers
I Can’t Help Myself – Four Tops
Ooo Baby Baby – The Miracles
What’d I Say – Ray Charles

The program first aired on June 28th, 1965 on CBS ... and this is another one of those "at the time" captured moments of a VERY exciting time in music history.  (Offering commentary on this special broadcast is Mary Wilson of The Supremes, in what would turn out to be her last interview ... she died just thirteen days later.)

Along with some special commentary by Harvey Kubernik ... 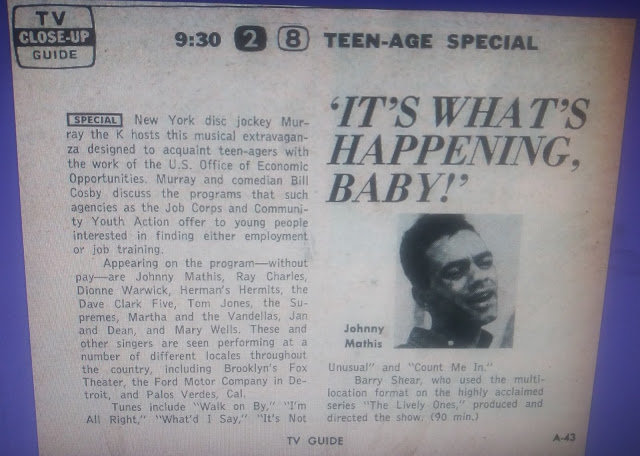 Famed New York disc jockey "Murray The K" (Murray Kaufman) became known as "The Fifth Beatle" when he befriended John, Paul, George & Ringo during the musical British Invasion of the 1960s. In addition to presenting all-star rock and soul concerts at the historic Brooklyn Fox theatre, Murray The K hosted a legendary star-studded special, It's What's Happening, Baby, to be telecast for the first time in more than a half century. The show, featuring live, on-stage performances by some of the greatest soul, rock and r&b artists of the 20th century, debuts on Saturday, March 6th Public Television outlets with encore telecasts; check local listings.
The long-unseen landmark program is being presented by veteran public television producer TJ Lubinsky, creator of the hugely popular My Music specials on PBS.
It's What's Happening Baby has been newly-restored from original video and audio master tapes. The ground-breaking program was the brainchild of Kaufman, who had given many of the greatest African-American performers their breakthrough in his staged concerts and radio shows. He then fought to present that powerful pool of talent, including many of the bright soul-pop stars of Motown on It's What's Happening, Baby. The once-in-a-lifetime special was originally commissioned by the U.S. Government's Office of Economic Opportunity as part of the war on poverty, encouraging American youth to seek summer employment while out of school.
Featuring over a dozen iconic artists -- including Ray Charles, Dionne Warwick, The Righteous Brothers, The Supremes, Marvin Gaye, Johnny Rivers, The Miracles, Herman's Hermits, The Temptations and Patti LaBelle & The Bluebelles -- It's What's Happening Baby proved to a huge success when it first aired on June 28, 1965, on CBS, attracting over 20 million viewers. Of special note is the fact that Mary Wilson of the Supremes shared her recollections of the show of which she was part.  She recorded her interview for the program on January 26, 2021. It was to be the very last interview she would ever give as she passed away just 13 days after that nostalgic encounter.
Now, nearly 56 years later, many of the original musical artists appear in new segments, offering fond memories of working with Murray The K, who helped put rock and roll music into the mainstream during his days as one of the most influential radio personalities in New York during the 1950s and 1960s. Dionne Warwick recalls, "He was the man! To be part of a Murray The K show was the thing to be." Little Anthony adds, "He was a real showman. Everybody fell in love with him.”
During 1978 I co-produced and hosted 50/50, the landmark weekly television music an interview program from Theta Cable in Santa Monica, California broadcast on the milestone Z Channel in Los Angeles and Manhattan Cable in New York.
My guests were record producer Michael Lloyd, multi-instrumentalist/record producer Todd Rundgren, music journalist/author Danny Sugerman and famed New York deejay/television personality Murray the K (Kaufman).
Cynthia Kirk, the music critic of Variety praised 50/50, and wrote “on a par with The Midnight Special.”
I encountered Murray the K when he was living in Southern California and married at the time to dancer / actress Jacklyn Zeman, a popular soap opera star with credits on One Life to Live and General Hospital.
Zeman had met Murray the K” Kaufman in New York as a dancer for The Schaffer Music Festival where Murray was the Master of Ceremonies.
In 1967, Murray produced and wrote Murray the K in New York on WPIX-TV. An off-shoot of his ground-breaking music video-format that started with It’s What’s Happening, Baby.
In 1978, I invited Murray to be a guest on 50/50 and brought along footage from his 1967 program. We screened Otis Redding lip synching to “Satisfaction” and “The Story of Love,” with Aretha Franklin singing live on “Baby I Love You” and “Respect.” He also screened the Doors’ “People Are Strange” which featured a live vocal from Jim Morrison over a pre-recorded instrumental track.
I remember in pre-production asking Murray about 1965’s It’s What’s Happening Baby, but like so many of our celluloid memories, Murray indicated tapes existed but legal rights and music clearances were problematic.
He did show me an ancient faded and marvelous clip of Dionne Warwick on a VHS tape performing “Walk on By” which we could not broadcast owing to legal restrictions.
At the time I wondered, “Would I ever get to see this monumental collection of soul, pop and R&B musical stage talent in Los Angeles?”
I’m elated to announce that on Saturday night March 6th, on Public Television nationwide, It’s What’s Happening,  Baby will be broadcast, with encore telecasts scheduled.
"Murray The K" became known as "The Fifth Beatle" when he befriended John, Paul, George & Ringo during the musical British Invasion of the 1960s. Let’s also remember that in June, 1964, on the Rolling Stones' first American tour and their visit to New York, it was Murray who spun the Valentinos' “It’s All Over Now” on his WINS Swinging Soiree influential radio show. Kaufman then handed the band’s manager / record producer Andrew Loog Oldham a copy of the disc at Bob Crewe’s apartment at The Dakota. A week and a half later, Oldham took the Stones into the Chess Records Studio in Chicago and cut this Bobby Womack / Shirley Womack-penned tune for their first hit single.
-- Harvey Kubernik
*****
I found it interesting that TJ and PBS decided to use THIS photo to help promote this upcoming special ... 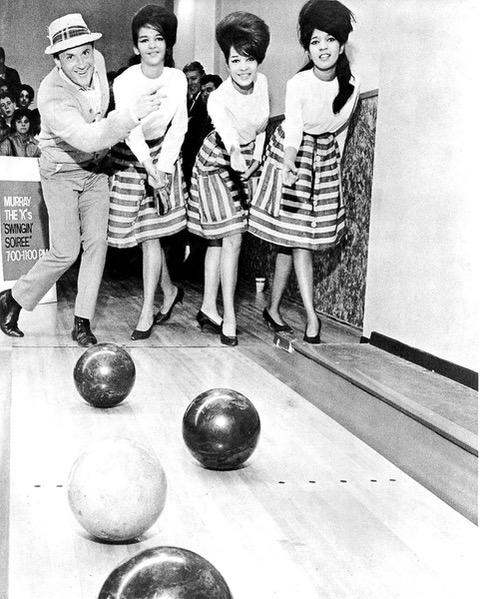 As I have been revisiting our 2008 Phil Spector Series ... doing some extensive editing and fine-tuning, preparing it for permanent posting, I have also been re-reading Ronnie Spector's autobiography, "Be My Baby:  How I Survived Mascara, Miniskirts and Madness, or My Life As a Fabulous Ronette," a fun read and inside look at the madness that was Phil Spector.
Murray The K took The Ronettes under his wing before they ever even had a hit record.  The girls were just young teenagers, still in high school, when he started booking them for appearances at his regular shows at The Fox Theater in Brooklyn.
Truth be told, they were hired more as dancers ... and squeezed into extremely tight, revealing outfits to put a little pizazz and sex appeal into the act.  Since they didn't have any hits of their own, if they were given a chance to sing at all (usually to allow another act a little more time to get ready or make some necessary stage moves and adjustments), they would sing some of the other popular hits of the day like "The Twist" or "Do You Love Me" with the back-up band.  This went on for years.
But then, when "Be My Baby" skyrocketed to the top of the charts in 1963, they moved from space-fillers to headliners overnight.  (The girls always went over well with the crowd ... first, because they were exciting to watch and second, because they were local girls who grew up in the area, DREAMING of being able to perform at The Fox Theater someday.)
According to Ronnie's book, it was SHE who arranged for Murray The K to first connect with The Beatles.  The Ronettes had met The Fab Four in 1963 when they were touring England in support of their #1 Hit.  (John Lennon quite famously developed a MAJOR crush on Ronnie at the time, so the girls had some unique access to experiencing Beatlemania first hand on the British level.)
When "I Want To Hold Your Hand" started to break here in late-December, 1963 / early-January, 1964, and it was determined that The Beatles were coming to America to do The Ed Sullivan Show, Murray asked Ronnie if he could capitalize on her connection to the group and gain up close and personal access.  As such, Murray was able to broadcast from The Beatles' hotel rooms and conduct interview in the back seat of taxi cabs and limos.  He dubbed himself "The Fifth Beatle," something the guys weren't particularly happy with, but at this point they needed all the publicity they could get in order to catch on here in America ... so they accepted it (apparently resenting it every step of the way!)
Overtime, all parties realized that they were good for each other and Murray (and The Ronettes) were able to spend time with The Fabs on their subsequent trips to The States.  In fact, in 1966, with Lennon still somewhat smitten, The Beatles asked The Ronettes to be part of what would turn out to be their last tour of America.  What most people don't know is that although The Ronettes toured as part of the bill, Ronnie was not with the group for these performances!  Under Phil's direction, Ronnie stayed home with him instead, after he spent considerable time convincing her that touring with The Beatles would be a bad career move ... "Why would you want to go out and do shows where you will be completely overlooked?  NOBODY in the audience will be coming to see you ... they only want to see The Beatles ... and no one will hear you anyway over all the screaming.  It would be a complete, insulting waste of your talent to take part in this tour ... let the other girls go."  (Incredibly, it wasn't the first time ... when The Ronettes were booked as part of Dick Clark's Caravan Of Stars Tour in '63, Phil kept Ronnie home to record lead vocals on the next Ronettes records and sent her sister out to tour with the group instead.  This means that anybody who saw The Ronettes as part of this tour ALSO didn't see Ronnie, the actual voice of the band!)  And get this ... since Estelle Bennett and Nedra Talley were not home to make the recording sessions, Spector told Ronnie "Don't worry about them ... they're just background singers ... we've got plenty of those!!!" ... which is why Darlene Love and Cher are the ones singing background on many of those early Ronettes records!
Like I said, a fascinating book!  (kk) 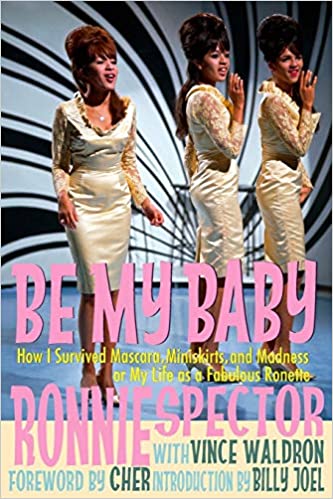