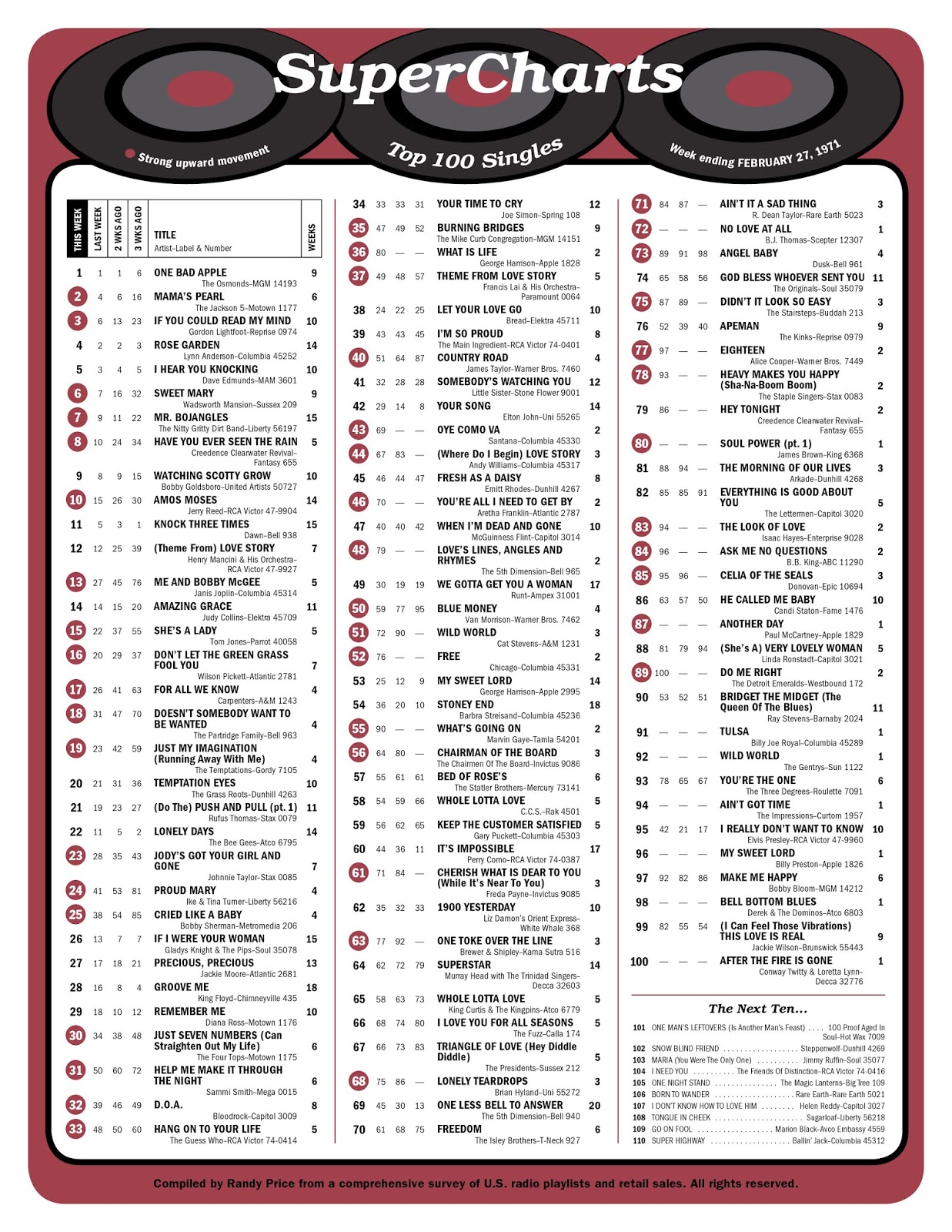 After four new Top Ten entries last week, we only find ONE new track breaking into the most coveted spots on the survey this week.  Dawn's former #1 Hit, "Knock Three Times," slips down to #11, allowing Jerry Reed's "Amos Moses" to slip into the #10 spot.

The Osmonds hold on to the #1 spot for a third consecutive week, but their greatest teeny-bopper competition, The Jackson Five, jump from #4 to #2 to give them a run for the money.  (My guess is that they'll take over the top spot next week, as the youth of America seem to have the final say as to where the top songs rank right now.)

Perhaps the biggest surprise is the sudden resurgence of Sammi Smith's hit "Help Me Make It Through The Night."  It climbs 19 spots (from #50 to #31) in its sixth week on the chart.

The Guess Who are up 15 places with their latest, "Hang On To Your Life," and The Mike Curb Congregation climb a dozen spots with "Burning Bridges."

One of my favorite "Forgotten Hits" B.J. Thomas songs, "No Love At All," premiers on the chart this week at #72.

Meanwhile, George Harrison's former bandmate, Paul McCartney debuts at #87 with his first solo single release, "Another Day."  (There were no singles released from Paul's album "McCartney" last year ... although "Maybe I'm Amazed" would have been a sure-fire #1 hit, thus beating George to the punch with the very first solo Beatles #1, had Paul decided to go that route.)

And the vastly overlooked "Bell Bottom Blues" by Derek and the Dominoes, Eric Clapton's new band, premiers at #98.  (This one remains one of my very favorite songs of all time.)

This Week In 1971:
February 21st – The entire episode of tonight’s “Ed Sullivan Show” is dedicated to the fifth anniversary of The 5th Dimension.  This would be the group’s last appearance on Ed’s program, which would be cancelled at the end of the season after a 23-year run.

Among the tracks they performed this evening were “Love’s Lines, Angles And Rhymes,” “Puppet Man” (with Connie Stevens) and then, in a fifteen minute spot that closed the show, “Up, Up And Away,” “One Less Bell To Answer,” “Stoned Soul Picnic,” “Wedding Bell Blues” and “Aquarius / Let The Sunshine In.”

February 24th – Diana Ross files for divorce from her first husband after just five weeks of marriage.  (They ultimately reconcile … and then divorce five years later!)

February 26th – Erykah Badu is born
Posted by Kent Kotal at 6:00 AM